Norway has talked for years about weaning itself off fossil fuels. But in response to the current crisis, the government has provided unprecedented support to keep that same industry alive and well.

Norway’s parliament agreed on June 8 to provide some kroner 100bn ($10.6bn) in tax relief to oil and gas companies, to help them stay afloat and continue investing despite the coronavirus-induced collapse in prices. The bill was backed not only by the Conservatives and their partners in Norway’s ruling coalition, but also left-wing opposition parties.

“We have long known that investments on the Norwegian continental shelf would fall,” the Conservatives’ parliamentary leader Trond Helleland explained. “Although the government is pursuing a policy to make the Norwegian economy less oil-independent, it is important that the crisis we are in now does not make the fall so sudden and deep that we lose valuable expertise that is important for the transition.”

The oil and gas industry is one of the bedrocks of Norway’s economy and typically provides around 20% its of budgetary receipts. Demonstrating its penchant for long-term planning, the Nordic state is willing to forgo considerable tax now to protect future revenue flow.

Under the announced measures, upstream companies will be able to deduct investments made in 2020 and 2021 immediately from the special petroleum tax base, and receive cash payments from the government if these investments exceed the tax amount. The so-called capital expenditure uplift, which reduces the special tax base, will be raised to 24% over one year, from 20.8% over four years and only 10% in the government’s initial proposal. Projects that are approved before the end of 2022 and approved by authorities before the end of 2023 will benefit from the new regime up until they start production. 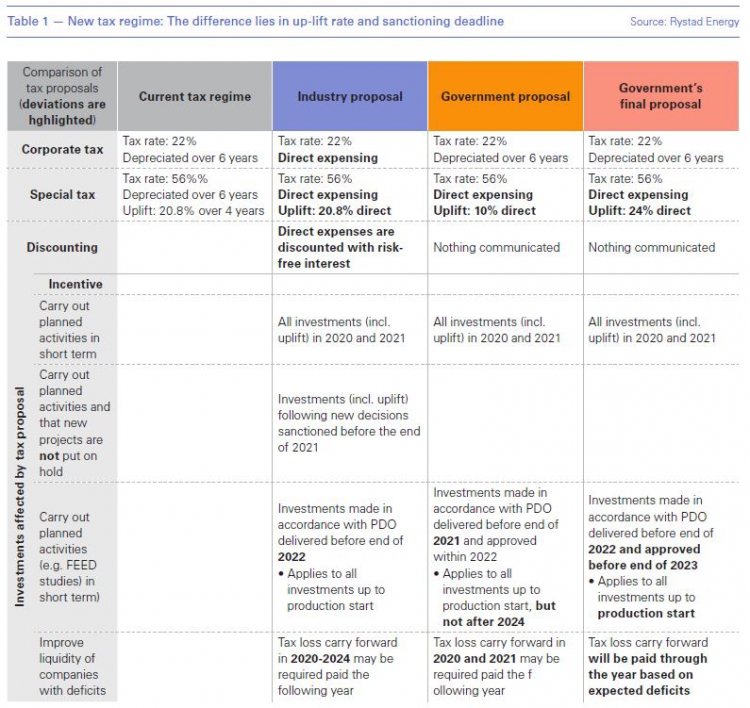 This represents far more support than was afforded the industry in the aftermath of the 2014 oil crisis. Indeed, this time around, the industry got more or less what it asked for.

“The final package proposed came very close to the industry’s proposal,” Emil Varre Sandoy, analyst at Oslo-based Rystad Energy, told NGW. “It improves the breakeven price of not-yet sanctioned projects by 40% on average, and should trigger a wave of new [development plans being filed] by the end of 2022.”

“The recent measures taken by the Norwegian government will provide much needed respite for an industry that has been caught off guard,” Edinburgh-based Gneiss Energy’s managing director Jon Fitzpatrick said. “Not only should this initiative safeguard jobs, but it will certainly encourage project investment in the short to medium term and allow businesses to retain their competitive position.”

The UK response to the crisis has fallen short in comparison, Fitzpatrick said.

“Conversely, on our side of the continental shelf, if the UK government doesn’t step in to provide fiscal support soon, further mass redundancies are inevitable,” he explained. “We are seeing companies of all sizes implement major capex reductions as they adapt their business models to the new environment.”

Norway’s tax regime is already highly supportive of exploration activity as well, enabling companies to deduct almost 80% of their exploration costs from taxable income. This has helped spur higher levels of exploration drilling activity in Norway than in the UK, during this downturn just as in the previous one.

Operators have welcomed the relief, backing up their praise with firm commitments.

The day after the parliament’s vote, Aker BP said it had awarded a kroner 1bn ($105mn) contract to oil services firm Kvaerner to supply an unmanned platform to redevelop the Hod oilfield. Aker BP had put this project on hold back in April.

“The petroleum industry is going through a very challenging time, and we are very pleased to see the rapid and strong response from Norwegian lawmakers,” Aker BP CEO Karl Johnny Hersvik said. “The proposed changes are appropriate and necessary and will strengthen our capacity to invest while at the same time contribute to the improved profitability of new field developments.”

Meanwhile Equinor signed off on a kroner 1.5bn plan to connect installations at the Gina Krog and Sleipner fields to the onshore electricity grid. This means they will be powered by onshore renewables rather than onsite gas generators, reducing their carbon footprint.

The tax reform will “provide the industry with the predictability it needs to continue work on planned projects that will stimulate new investments and maintain activity in a challenging period.”

Before the Covid-19 crisis hit, sanction decisions were anticipated at as many as nine oil and gas projects off Norway. But all but one approval at Eni-owned Var Energi’s Balder X redevelopment scheme were later deferred. Var Energi had effectively greenlit the project back in December anyway, when it filed development plans with authorities.

As stated, Hod’s redevelopment is once again going ahead. Many of the other investments that had been shelved are also back on track thanks to the tax relief, according to Sandoy. Decisions will likely be taken this year at Equinor’s Breidablikk, Valemon North and Heidrun Phase 2 projects, as well as Aker BP’s Gekko scheme, the expert said. The sanctioning of the others, Aker BP’s Frosk and Trine/Trell fields and Okea’s Grevling discovery, will still be delayed until 2021, mostly because of the lost preparatory time so far this year.

Norway’s already-strained budget will take a substantial hit from these incentives. The Nordic state typically runs an enviable budgetary surplus, but it said in May it was facing a kroner 382bn shortfall this year, amid higher spending, general economic weakness and a more than halving of oil and gas revenues to kroner 125.8bn.

The government has withdrawn kroner 420bn ($41.4bn) from its $1 trillion oil fund, Government Pension Fund Global, to shore up its finances.

Besides weaker prices, the budget is also suffering as a result of Norway’s self-imposed production cuts, aimed at helping to rebalance the market. This policy also highlights Oslo’s focus on the bigger and longer-term picture.

Under these cuts, Norwegian producers are set to reduce supply by 250,000 b/d in June, and 134,000 b/d in the second half of 2020, versus a baseline level of 1.859mn b/d. Norway’s petroleum ministry published a list of affected fields last month, excluding those that produces large amounts of gas and those reaching depletion. The list includes the Johan Sverdrup field in the North Sea, whose low costs and rising production operator Equinor has counted on to sustain it during the crisis.

Notably, Equinor has also come under fire from the Norwegian government for the losses it has suffered over the years in the US. The company made a series of onshore and offshore acquisitions in there in the years up to the 2014 oil price crash, eventually causing it to rack up losses and write-offs totalling $20.4bn.

“The company should have provided better and more direct information in its communication with the ministry as well as with other shareholders,” Norwegian petroleum minister Tina Brua told parliament on June 10. “I also see a need to strengthen the government’s follow-up of Equinor’s foreign operations.”

The government has a 67% stake in Equinor and holds regular meetings with its top brass. Yet it does not have a seat on the company’s board and is not involved in the day-to-day running of the business. There is a risk that Equinor might lose some of this autonomy in the wake of this scrutiny. Equinor has commissioned auditing firm PwC to review its US operations, while the government has hired Arctic Securities to assess the firm’s international business. Both reports will be made available to the public, Bru said.