On February 7, the consortium overseeing the construction of a 1,200-kilometer pipeline to supply Russian natural gas to Europe announced it had resumed laying pipes in the final unfinished stretch in Danish waters.

Washington has long opposed the Nord Stream 2 project, arguing it would only make Europe more dependent on Russian energy -- a stance backed by much of Eastern Europe and in particular by Ukraine, a key energy-transit country that would lose out on billions of dollars in transit fees if the Baltic Sea conduit from Russia to Germany were to go into operation.

Given its economic and strategic importance, Nord Stream 2 has been in the spotlight following the jailing of Navalny, the detention of thousands of people who protested his arrest and prison sentence, and the expulsion of three European diplomats whom Russia accused of participating in the protests.

With calls growing louder to pull the plug on the project, German Chancellor Angela Merkel said on February 5 -- after the expulsions of the diplomats, who Germany, Sweden, and Poland said were merely observing the protests -- that "for the time being" her stance in support of Nord Stream 2 remained unchanged.

"In connection with the events in Russia, we have already said that we reserve the right to continue sanctions, especially against individuals," Merkel told reporters after talks with French President Emmanuel Macron. "The [German government's] position on Nord Stream 2 is not affected by this for the time being."

In late December 2020, a vessel called the Fortuna put a 2.6-kilometer section of the pipeline in place in German waters. 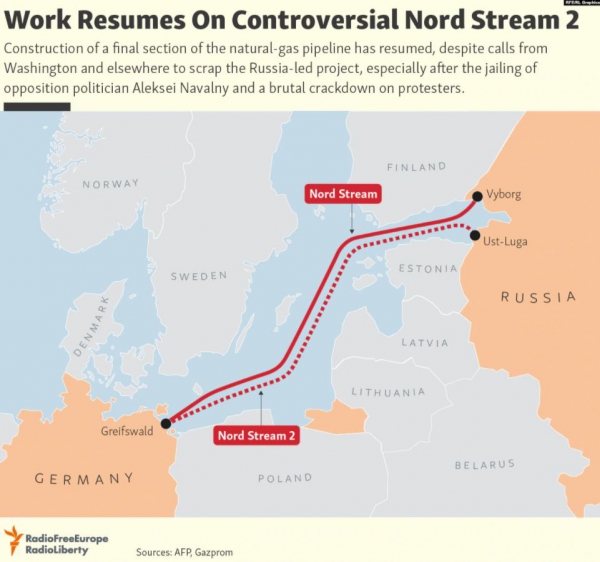 And on February 6, the consortium overseeing construction of the pipeline announced that the Fortuna had resumed laying pipes in Danish waters not far from the terminus on Germany's Baltic coast.

Despite the fact that the Russian-based company that owns the Fortuna is under U.S. sanctions, the consortium told Reuters, "All works are [being] performed in line with the relevant permits."

France has called on Germany to rethink the project in the wake of the Navalny jailing. "We have always said we have the greatest doubts on this project in this context," European Affairs Minister Clement Beaune told France Inter radio on February 1.

Asked specifically if France wanted Berlin to drop the project, Beaune said, "Indeed, we have already said this."

"Sanctions have already been imposed, we could [add more sanctions] but we have to be clear, they will not be enough," Beaune said, although he acknowledged any final decision would rest with Germany.

New U.S. President Joe Biden has called Nord Stream 2 a "bad deal" for Europe, and White House spokeswoman Jen Psaki said on January 26 that he continued to see it that way. But with just that 120-kilometer link in Danish waters, plus a small section near German shores, is there any stopping the project now?

As the name suggests, there is a Nord Stream 1 pipeline. Nord Stream 2 would double the capacity of the existing Nord Stream pipeline to a total for both of 110 billion cubic meters of gas per year. 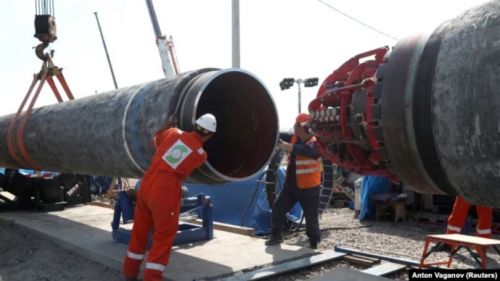 For the government of Russia, which is currently the world's biggest energy exporter and relies on oil and gas sales both to fill state coffers and build geopolitical clout, the project is an important one.

In late December, Russian President Vladimir Putin said he hoped the new U.S. administration would not impede the completion of the pipeline. He suggested it would mark a return to what he called "fair competition in international markets" -- apparently a reference to sanctions imposed upon it, which Moscow claims are merely meant to muscle Russia out of the market for U.S. gain.

The United States denies that, and a core U.S. concern about the project is that it could increase Europe's reliance on Russian gas, compromising its energy independence and potentially boosting Moscow's political clout in the region.

The fate of the pipeline will depend largely on the United States and Germany and on whether their positions change in the coming weeks or months.

"The fate of Nord Stream 2 is not clear yet, as it will depend on the results of...U.S.-German negotiations," said Maria Shagina, a research fellow at the University of Zurich

Biden, who was inaugurated on January 20, spoke with Merkel on January 25 and with Putin one day later. But White House readouts of the conversations made no mention of Nord Stream 2.

"We continue to believe, the president continues to believe, that Nord Stream 2 is a bad deal for Europe," Psaki said on January 26. She also said the administration would review certain sanctions measures imposed under Trump.

"We're aware that the previous administration imposed new restrictions on activities related to the pipeline under the National Defense Authorization Act [NDAA], and we will be reviewing those measures," Psaki said.. 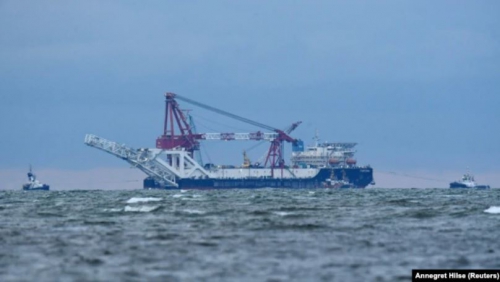 These expand the threat of U.S. sanctions against companies that provide services to ships laying pipes for the project, as well as those that carry out pipeline testing, inspection, or certification activities.

With questions still swirling as the construction finish line approaches, a February 9 report from a German NGO added to the intrigue by suggesting that while Trump was still in office, Berlin had been ready to do a backdoor deal to avoid any imposition of U.S. sanctions against the project.

The NGO Environmental Action Germany (DUH) said it had a copy of letter in which German Finance Minister Olaf Sholz, addressing then-U.S. Treasury Secretary Steven Mnuchin, offered up to 1 billion euros ($1.2 billion) for the import of U.S. liquefied natural gas.

The German Finance Ministry did not immediately comment on the report.

In e-mailed comments to RFE/RL, research fellow Shagina said the United States might be prepared to drop the PEESCA sanctions "if Germany tables a 'grand bargain' deal that would reduce Europe's energy dependence on Russian gas" and ensure Ukraine a continued role in providing gas to Europe.

However, she added, "It is unclear what sort of a 'grand bargain' is acceptable for the U.S. to alleviate its concerns about Nord Stream 2."

In addition to concerns about European reliance on Russia for energy supplies, another worry for the United States is that Ukraine could lose crucial gas-transit revenues -- a further blow to a country that has been under immense pressure from Moscow for years. 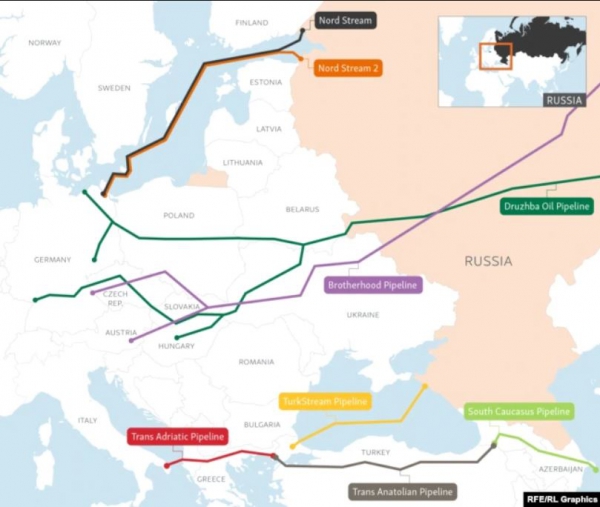 Ukraine, which lies between Russia and the EU, was one of Russia's largest consumers of natural gas until relations between the two ex-Soviet republics soured badly in 2014, when Moscow seized control of the Crimean Peninsula and began backing separatists in eastern Ukraine in a conflict that has killed more than 13,200 people.

Kyiv stopped buying Russian gas in November 2015, increasing purchases from Europe instead. Gazprom, meanwhile, has shipped less gas through Ukraine. Shagina said estimates indicate that Ukraine could lose up to $3 billion in gas-transit fees annually as a result of Nord Stream 2.

Whatever the positions of the United States and Germany's EU partners, Berlin's ultimate decision may rest on domestic politics. General elections are slated for September, when Merkel is expected to step down after 15 years at the helm.

The man in pole position to succeed Merkel after the vote, new Christian Democrat leader Armin Laschet, firmly supports Nord Stream 2. But his potential governing partner, the ecologist Greens, are stiffening their opposition to it.

The Navalny case has galvanized the Greens into ramping up their demand that the pipeline be stopped, and it could hamstring the next chancellor, experts say.

Greens leader Annalena Baerbock recently made it clear she would press the government to renounce the politically charged pipeline project. "We'll push hard for that now and in the future," Baerbock told broadcaster ZDF last week when asked if the project could not go ahead with her party in the German government.

Amid the heated-up politics over Nord Stream 2, Arild Moe, an energy researcher at Norway's Fridtjof Nansen Institute, said that there was no need for it at this point, given that EU gas demand is rising slower than had been projected.

"The interest in Nord Stream 2 in Europe was not only caused by transit concerns, but also out of anticipation of growing gas demand," Moe told RFE/RL in e-mailed comments.

"Today it looks like demand will not grow that fast -- which means there is no imminent need for Nord Stream 2," he wrote. "It can remain unfinished for several years without creating much problems for importers."

Tony Wesolowsky is a senior correspondent for RFE/RL in Prague, covering Belarus, Ukraine, Russia, and Central Europe, as well as energy issues. His work has also appeared in The Philadelphia Inquirer, the Christian Science Monitor, and the Bulletin Of The Atomic Scientists.