The news that Chevron has agreed to acquire Noble Energy is generating headlines – and not only because it is the largest oil and gas deal to be announced since the industry entered a rapid downturn this year. The transaction comes after the US major dropped its $33bn bid to buy Anadarko Petroleum last year, unwilling to enter into a contest with the winner, Occidental Petroleum.

The deal to buy Noble is considerably smaller – totalling $5bn in stock, and $13bn including the assumption of debt – but nonetheless significant. But even on a smaller scale, it ticks some of the same boxes for Chevron that the aborted takeover of Anadarko would have: expanding the super-major’s US shale footprint while also diversifying its international portfolio with new conventional gas assets.

Notably, Chevron gains entry into Israel. Super-majors have traditionally avoided Israel in an effort not to strain relations with the Arab countries in which they operate.

“It may appear as a bold move by Chevron, but their ties with the Middle East regional leadership are strong and long-lasting,” Rystad Energy told NGW. Chevron is actually the super-major that is least exposed to the Middle East. “While all the other majors have piled into Iraq, Chevron just has a tiny position in Kurdistan, which it appears to be preparing to unwind from by bringing in Genel Energy. The only other Middle Eastern footprint for Chevron is in the Neutral Zone – land between Saudi Arabia and Kuwait – which has had its issues in the past five years,” the consultancy told NGW.

“By taking up such a prominent position in Israel, Chevron appears to be sacrificing future potential opportunities in the Gulf/Iraq-Iran for the potential of Egypt-Israel Mediterranean and Red Sea acreage,” it added.

The attraction of Noble’s Israeli assets appears to stem at least in part from the fact that they are already in production and will provide an immediate source of cash flow.

“I think a company like Chevron is very experienced in entering countries with high political risk,” GlobalData told NGW. “More important, the decision to go to a region of the world which is considered unstable has to be based on economic reasons, which should outweigh above-ground risks,” it said. “Also the natural gas developments in the area are supposed to benefit not only Israel but other countries like Egypt and Jordan.”

At the same time the acquisition includes greenfield opportunities that could form part of a pivot towards gas in the longer term if Chevron decides to proceed with developing them.

Noble’s eastern Mediterranean operations – and particularly the Leviathan field offshore Israel – are thought to be the company’s most valuable assets outside of the US. Noble owns a 39.66% interest in Leviathan, which began domestic sales in December 2019, followed by exports to Egypt and Jordan at the start of this year.

Leviathan’s first phase has a capacity of 1.2bn ft3/day, and given estimates that the field could hold around 22 trillion ft3 of recoverable gas, there is considerable scope for expansion. Noble and the other partners in the field – Delek Drilling and Ratio Oil Exploration – are considering a floating LNG (FLNG) development for subsequent phases of the project. Noble’s other notable assets in the region include a 25% stake in Israel’s Tamar field, which has been online since 2013 and a 35% interest in the Aphrodite discovery in neighbouring Cyprus’ waters. 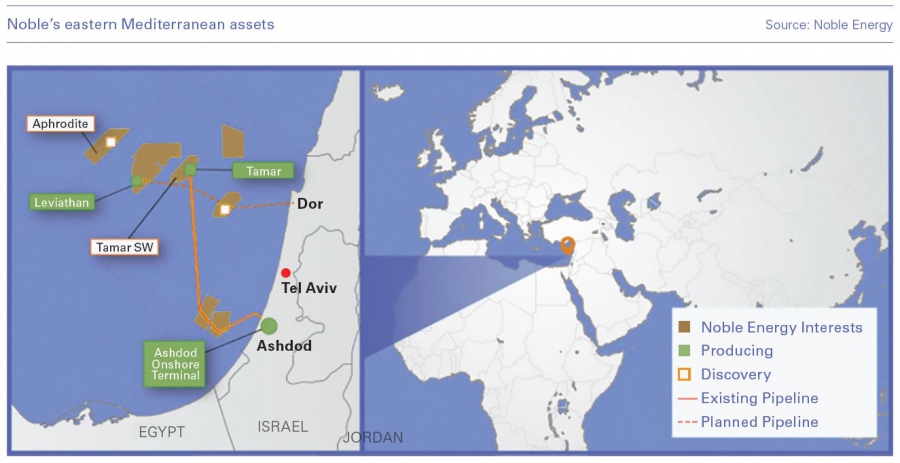 While pursuing greenfield developments is not an attractive option in today’s gas market and would be more likely to form part of a longer-term strategy, Chevron stands to benefit immediately from Noble’s existing Israeli production.

“A key consideration is the fact that these developments are either producing or well advanced, so in that sense the difficult negotiations have already taken place and these assets are mainly cash flow-generating enterprises,” GlobalData said.

Chevron’s entry – as well as being a welcome development for Israel – can also help drive Leviathan’s expansion forward. It can “definitely accelerate these type of multi-phase developments if needed,” GlobalData said.

Wolfe Research described an FLNG lease in the eastern Mediterranean as an “interesting option” for expanding operations, albeit one that needs global gas fundamentals to improve. Wolfe estimates that a 2.5mn metric ton/year FLNG vessel can be leased for $200-250mn/year, or $1.70-2.00/1,000 ft3 of production. “This option increases the cash breakeven but saves materially on project development costs,” Wolfe analysts wrote.

While Chevron has assured Cypriot officials that it will continue Noble’s work towards the commercialisation of Aphrodite, that project appears to be less of a priority under current market conditions. Indeed, Noble said in late June that it was adjusting its activity schedule in Cyprus in response to the Covid-19 pandemic and lower commodity prices, and it would not be surprising if Chevron also opted to proceed more slowly.

Rystad said it expected Aphrodite to be developed “as soon as unitisation with Israel is agreed and the export options are decided with the three countries” – the third being Egypt. It added, however, that the size of the discovery may not be sufficient to satisfy all of the participants.

“With so much discovered gas available in Noble’s Israeli acreage, Aphrodite in Cyprus will be at the end of the development queue,” the consultancy said. “Whichever way the discovered but uncontracted gas flows, to Egypt or Europe, Aphrodite will have to piggy-back on whatever solution is chosen for the further development of Leviathan and Tamar.”

The acquisition also illustrates Chevron’s continued pursuit of shale growth, even though it scaled back its Permian Basin activity in the wake of the oil price collapse in March and the subsequent impact of Covid-19 on demand. 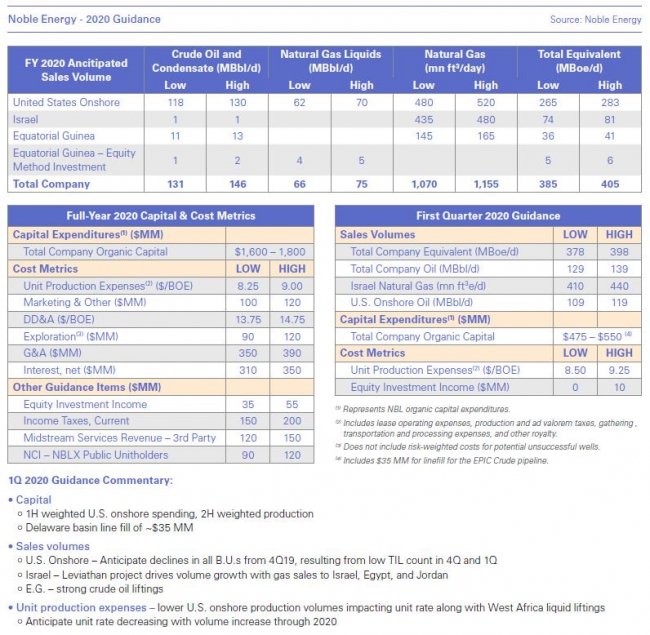 “I think shale is indeed important for Chevron in the short term, whereas the diversification into natural gas assets is more of a mid- to long-term strategy,” GlobalData said. Rystad analysts, meanwhile, view Noble’s US assets – particularly in the Permian and Denver-Julesburg (DJ) basins – as having the most significant upside in terms of economically recoverable resources.

The DJ Basin, meanwhile, will be a new area of operation for Chevron, and benefits from low breakeven prices and a relatively low base decline rate, according to Rystad. But while Chevron may be better positioned than independent producers to invest in shale, its unconventional drilling plans also remain sensitive to price movements.

“The acreage in Colorado DJ is very rich in both oil and gas but would need higher commodity prices before activity takes up,” Rystad said.

RBC Capital Markets estimates that Noble’s US production is split roughly 50:50 between liquids and gas, making the assets potentially more attractive during periods of uncertainty. However commodity prices behave, Chevron will have more options available to it once the deal closes.