“No new natural gas fields are needed in the NZE (Net Zero Emissions scenario) beyond those already under development. Also not needed are many of the LNG liquefaction facilities currently under construction or at the planning stage. Between 2020 and 2050, natural gas traded as LNG falls by 60% and trade by pipeline falls by 65%.” 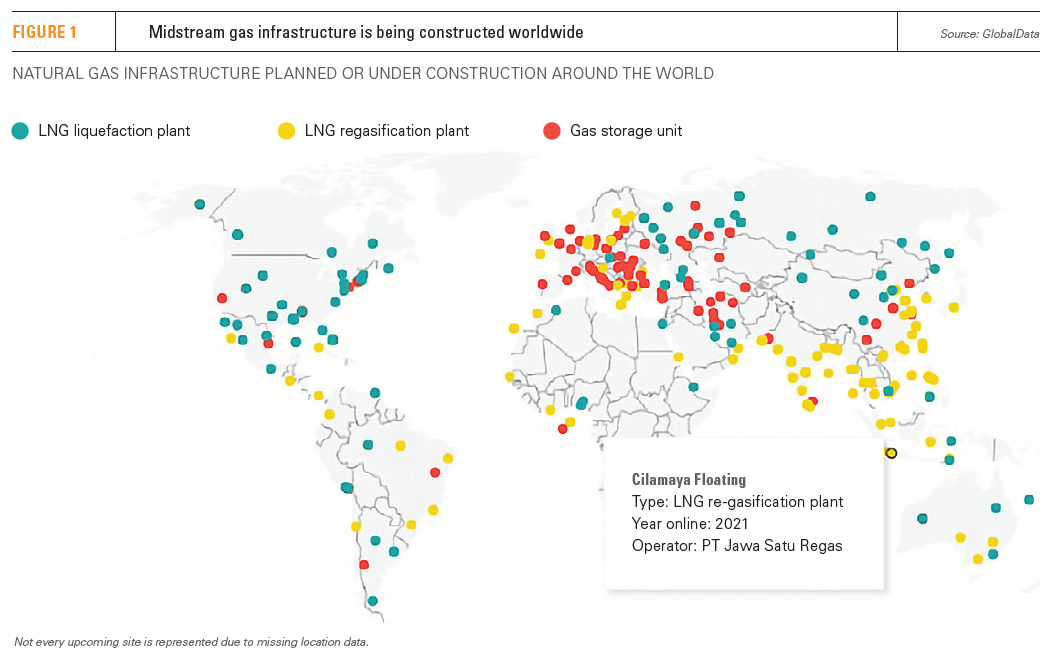 The International Energy Agency (IEA) stunned the international gas industry with these words in a special report presented to the world in May. Up to that time, the IEA had always accorded natural gas an important role in its “climate” scenarios. For example, in its Sustainable Development Scenario in the 2018 World Energy Outlook, the IEA projected growth in gas demand from 3769 bcm in 2017 to 4184 bcm in 2040. Suddenly, however, in Net Zero by 2050: a Roadmap for the Global Energy Sector, the IEA suggested gas demand needed to decline by 55% to 1,750bn m3 in 2050, according to the IEA. Quite a change. 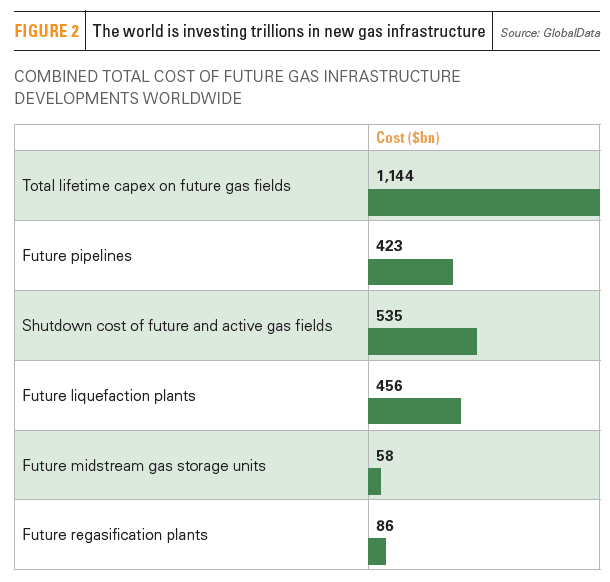 Now, hard data show how unrealistic the IEA’s net zero scenario seems to be. A report in Energy Monitor reveals that according to data from intelligence company GlobalData, “there is a multi-trillion dollar global pipeline of new natural gas projects”, including $1.1 trillion of investments in new gas fields and $400 billion in new gas pipelines. Overall, notes Energy Monitor, more than $2 trillion is set to be spent on gas projects across the value chain.

There are around 150 gas fields where extraction has yet to begin, but which have received a final investment decision, according to GlobalData, plus some 280 which are likely to be put into production. They include the 43,377bn ft3 North Field East in Qatar and the 41,439bn ft3 Prosperidade field in Mozambique.

The data also show a “massive scaling up” of LNG production, Energy Monitor notes. There are 366 new liquefaction plants on the way, on top of the 306 existing ones. There are also 182 regasification plants coming online, on top of the 156 existing ones. LNG is “on the cusp of becoming a global commodity like oil”, said Sreedhar Kona at Moody's Investors Service to Energy Monitor.

Most new regasification plants are planned in China and India, “suggesting these countries are looking to transition from coal to gas.” Data “also show 298 gas tankers are under construction, on top of the 598 that already exist.”

Total gas-fired power capacity is set to grow from 2,400 GW to 3,000 GW. “Asia-Pacific is leading the charge, with pipeline capacity of 230 GW, set to make the region the world leader for gas-powered electricity generation, overtaking North America.” 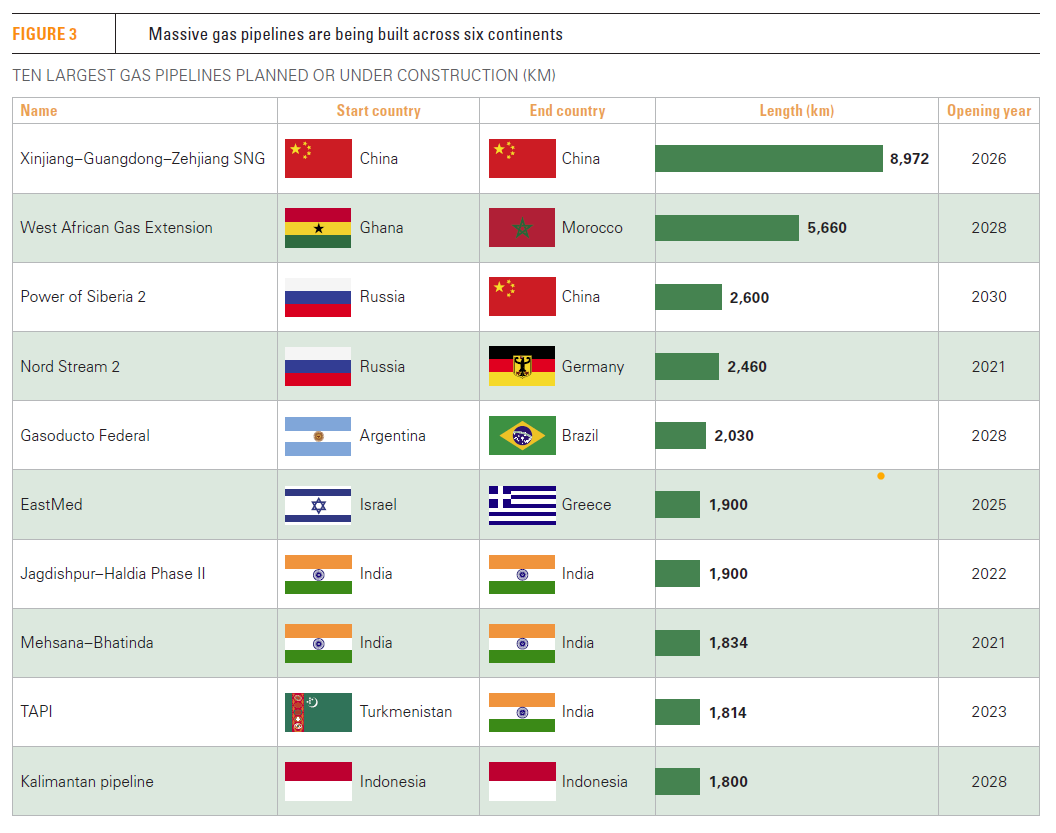 Gas pipeline capacity is also set to expand massively, with at least ten large gas pipelines planned or under construction. 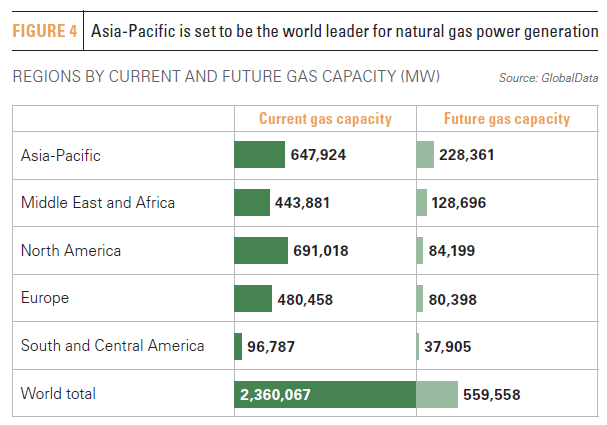 It is possible of course that many of these projects will not get built. Robbie Andrews of the CICERO Center for International Climate Research in Norway tells Energy Monitor: “A lot of these plans [are] based on forecasts made a number of years ago. Big industries don’t always move quickly, and it will take time for them to respond to climate pledges made in more recent months.”

Some cancellations have already started in the gas industry, for example in the US. “One of the largest utilities in the US, Duke Energy, is proposing massive new gas-fired generation in North and South Carolina, but regulators have recently told them to essentially go back to the drawing board,” says analyst Dennis Wamsted of the Institute of Energy Economics and Financial Analysis (IEEFA).

Nevertheless, few signs are pointing to a reversal in the gas sector. Gas demand is expected to grow by 3.2% in 2021, according to the IEA, following a 1.9% drop in demand in 2020. Energy Monitor notes that state-owned energy companies own around 90% of known oil and gas reserves. So while pressure is being put on private investors in western economies to divest from fossil fuels, the real decisions will be made by oil and gas producing states, suggests Energy Monitor.

Dmitry Marinchenko, a senior director at Fitch Ratings, notes that there is “a lack of coordination between policymakers and oil and gas companies. The main problem is that the pace of the energy transition is unknown, policies lack clarity, and companies and commodity exporters may have very different views on the most probable scenarios.”

Ultimately, notes Energy Monitor, “a more coordinated global strategy is required for natural gas, which includes economic support for more vulnerable countries.” As Andrews of CICERO puts it: “A kind of coordinated response, which has been lacking throughout the climate negotiations, will have to be better navigated if countries are to meet climate pledges.”

The Oxford Institute for Energy Studies (OIES) published a report in July, Energy Transition: Modelling the Impact on Natural Gas, showing two energy scenarios designed to limit the global temperature rise to well below 2 °C, one favourable to natural gas and one less favourable.  “The scenarios are not based on economics but more on how different policies might impact gas in the energy transition, while balancing energy supply and demand and meeting the emissions targets,” notes OIES.

In the scenario favourable to natural gas, gas demand continues to grow in the 2020s, peaking at just under 4,600bn m3 in the early 2030s. By 2050, gas demand would be around 4,200bn m3. This is broadly in line with the IEA’s Sustainable Development Scenario in the 2018 World Energy Outlook.

Hydrogen accounts for some 10% of global final energy consumption in 2050 in this scenario, with “blue” hydrogen (based on natural gas with carbon capture and storage) contributing almost half of total hydrogen production. Carbon captured from natural gas would reach 4.3 Gt by 2050, roughly 10% of current worldwide greenhouse gas emissions.