It would appear that the struggle against overly complicated and restrictive regulations governing Nigeria’s hydrocarbon industry has finally come to an end. The Nigerian parliament has at last passed the Petroleum Industry Bill (PIB), which has been under deliberation since 2008.

PIB was passed on July 1, 2021, by both the upper and lower chambers of Nigeria’s parliament. Days after PIB’s passage, top officials within the Muhammadu Buhari administration stated that the president would sign the bill into law before the end of the year. But first, the versions passed by each chamber must be harmonised.

A key aspect of the bill is that it will establish a new framework to govern the development of natural gas. The current legislation is focused on oil and largely overlooks gas. But now gas will be treated clearly as a separate resource, in line with the Buhari administration’s efforts to expand the role of gas in the Nigerian economy.

The government’s national gas expansion programme (NGEP) seeks to increase domestic use of gas in areas like power generation, industry, cooking and vehicle transport. As the world shifts towards cleaner energy in the face of climate change, Nigeria is working to maximise the use of its gas resources in order to reap both environmental and economic benefits.

While emissions reductions are a top priority globally, Africa contributes significantly less than developed countries. In fact, it accounts for only about 2% of global anthropogenic carbon emissions. But the continent’s location and its lack of capacity to deal with natural disasters leaves it vulnerable to the negative effects of climate change. But Africa also has a more urgent need, which is closing its shortfall in energy supply, and gas is touted as a key solution here as well.

The framework for gas, as well as other aspects of the bill such as rules on transparency and non-discriminatory access, have been hailed by industry stakeholders as giving a clear signal to potential investors that the country is ready to do business and end opaque practices. In the PIB draft, the Buhari administration shows a commitment towards increasing local and foreign investments in the energy sector as well as expanding local content, in order to spur the development of Nigeria’s human capital.

The PIB calls for the Nigerian Upstream Regulatory Commission to be established to regulate the technical, commercial, and operational activities in the upstream sector. In practice, permit holders will have to ensure that they minimise waste and adhere to international petroleum industry practices in health, safety and environmental preservation. There will also be a public register of all licenses and leases as well as regular inquiries, tests, audits, and investigations, so the commission can monitor the activities of permit holders. The commission will also monitor and regulate the operations of crude oil export terminals.

The commission will also be in charge of promoting the exploration and management of frontier basins in Nigeria. Although the bill did not specify which frontier basins will be included, they have been previously identified by Buhari as the Chad, Gongola, Anambra, Sokoto, Dahomey, Bida and Benue basins.

The bill also demands 10% rent on petroleum prospecting licensees, 10% rent on petroleum mining leases, and 30% of state-owned NNPC’s profit from oil and gas in production sharing, profit sharing, and risk service contracts be paid into a frontier exploration fund. This fund will primarily finance the testing and drilling of identifiable prospects and leads.

However, the proposal to transfer some of NNPC’s profits from upstream contracts for funding exploration has met with some opposition, particularly in the South-South region, where most exploration takes place. The Southern Governors' Forum questioned the sense of this proposal, arguing that if there is potential for resources of commercial quantity at a given site, the oil majors would have already explored it. Furthermore, this policy does not align with the global goal of reaching net-zero emissions in 2050, critics say.

PIB recommends that host communities receive 3% equity participation in hydrocarbon projects in the South-South region. Regional leader Edwin Clark described the government’s offer as “paltry” in a letter to the National Assembly after PIB was passed, repeating the demand that communities in the Niger Delta get a share of at least 10%. But the chairman of the senate committee on petroleum upstream, senator Musa Sarkin Adar, dismissed that the 3% share was an injustice. He added that designating 30% of NNPC’s profit under upstream contracts for frontier exploration was justified, as these basins have been shown to hold large undeveloped oil and gas deposits.

“We need to explore all basins and invest in other important sectors that need funding like innovation and technology,” he said.

As for the criticism that PIB does not support renewables and the energy transition, or does enough to reduce gas flaring, Adar noted that the bill was still subject to amendments. He defended the decision of the parliament and said Nigeria needed to maximise oil recovery before prioritising the energy transition.

Not a perfect bill

Though the bill is not perfect, stakeholders like Chevron, Shell, and TotalEnergies, have expressed support for PIB and are waiting for the two chambers of parliament to agree a harmonised version. The executive chairman of the African Energy Chamber, NJ Ayuk, has also endorsed PIB.

Speaking to NGW, Ayuk said the bill was a clear message to the energy industry that Nigeria now has a clear vision with a sound legal and regulatory framework that would support a coherent, investor-friendly oil and gas industry.

“Nigeria continues to provide natural gas investment opportunities in upstream oil and gas, however the country’s position is not what it was a decade ago. The hard truth is that Nigeria has lost its competitive edge,” he said. “However, PIB is going to change that and help attract new investment because the fiscal, legal and regulatory frameworks are in place but most importantly, there is certainty and investors now have a path to making good returns on their investment.

“This is the most effective way to improve Nigeria’s competitiveness in conventional upstream oil and gas sector that has not seen the massive investment that is needed to get new projects moving again,” he said.

Nigeria’s parliament set up a committee on July 8 to harmonise the chambers’ versions of PIB. During the process, it is expected that the issues around frontier exploration and host communities’ participation will be addressed. The lower chamber had agreed on a 5% equity participation for host communities. But the upper chamber lowered that to 3% before the bill was passed on July 1.

PIB makes various other recommendations to reduce costs and increase Nigeria’s oil and gas supply security, and calls for the creation of a development fund and the use of cost-reflective tariffs. 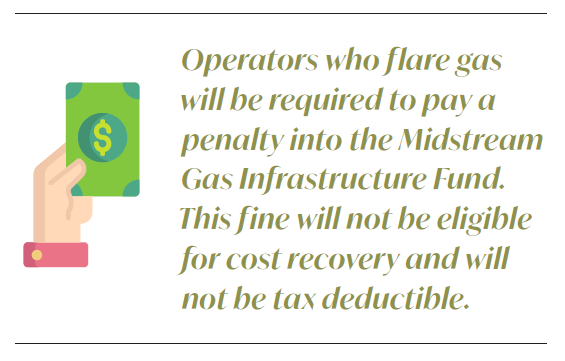 The bill states that tariffs should be set that permit reasonable returns for licensees on their investments. Therefore, commercial regulations for transportation, distribution, and processing of petroleum shall be on a cost-reflective basis. The tariffs will be set in US dollars or another foreign currency as applicable, and capital costs may be recovered in equal instalments over a period as determined by the upstream authority.

Prior to establishing a tariff methodology, there will be a stakeholders’ consultation with operators, consumers’ associations, and other interested parties. These tariff methodologies will be valid for six months after commencement.

For base prices, the upstream authority will every year determine the domestic base price for the purpose of determining prices for the power sector, commercial sector, and gas-based industries.

The PIB states that the supply of crude oil and condensates to the domestic market shall be on a willing buyer, willing seller basis. However, the commission may impose domestic oil supply obligations on lessees in certain cases and apply penalties if they do not comply. It will allocate domestic gas delivery obligations among all lessees before March 1 of each year, based on anticipated gas needs.

The PIB recommends for the Midstream and Downstream Petroleum Regulatory Authority to oversee the technical, operational, and commercial activities in the midstream and downstream sectors of Nigeria’s energy industry. This authority is expected to promote competition among investors, protect the interests of customers and ensure that there is security of domestic oil and gas supply and distribution.

The authority will keep public registers of activities within the midstream and downstream. It will also regulate safety measures as well as establish laboratories to ensure quality assurance and certification of oil and gas. Furthermore, it will determine the domestic base price and prices applicable to wholesale customers of the strategic sectors and gas distributors.

Oil and gas companies will be required to supply their products to domestic refineries, adhering to the global petroleum industry’s standards of practice. They will also have to follow environmental regulations and tariff and pricing frameworks, based on the fair market value for gas and petroleum products.

Before launching production, permit holders will have to install metering equipment on all facilities where gas will be flared. Twelve months from PIB’s effective date, all licensees/lessees producing gas will submit a gas flare elimination and monetisation plan to the commission. However, the commission has the right to take free of charge gas that is destined for flaring at the flare stack.

All licensees/lessees are required to, one year after PIB’s effective date and six months after their licence is granted, submit required environmental impact assessments (EIAs). They will have to make a contribution to an environmental remediation fund set up by the commission before their EIAs are approved.

The size of this contribution will depend on the scale of their operations and the level of environmental risk. On a yearly basis, the licensee/lessee may be required to review the level of environmental risk and increase their financial contributions. Where the commission is not satisfied, it will appoint an independent assessor to conduct the assessment and determine the financial contribution. The commission’s fund will be used to manage or reverse the negative impacts of exploration activities.

Any company granted an oil prospecting licence or mining lease or an operating company on behalf of joint venture partners is required to contribute 3% to the host community’s development fund. Upstream companies are required to pay 5% to the host community’s development fund, while other companies have to pay 2% of their actual operating expenditure in the immediate preceding calendar year to the same fund. This is in addition to the existing contribution of 3% to the Niger Delta Development Commission. The fund is tax-exempt and any contributions by a settlor are tax-deductible.

Royalties are at the rates of 15% for onshore areas, 12.5% for shallow water, 7.5% for deep offshore and frontier basins and 2.5-5.0% for natural gas. A price-based royalty ranging from 0-10% will be payable to the Nigerian Sovereign Investment Authority. The federal inland revenue service will collect hydrocarbon tax of 15-30% on profits from crude oil production, income tax of 30% and education tax of 2%.

Six months from when the PIB draft becomes law, the NNPC is required to transform itself into a limited liability company. Government shares in the national oil company will be held equally by the ministries of finance and petroleum resources, and the cost of winding down the assets, interests, and liabilities of NNPC will be borne by the government.

Going forward, NNPC and its subsidiaries will carry out their business on strictly a commercial basis, declare dividends for its shareholders and retain 20% of earnings to grow the business.

NNPC’s transformation is aimed at enabling the company to function more effectively and make it independent of political interference.