The Legal Service of the Council of the European Union has delivered opinions on the revised Third Gas Directive and its application to Nord Stream 2. Now that the list of targets has been widened, the EC has a better chance of success.

Nord Stream 2 had important news in March, when two Council legal opinions appeared to suggest that a proposed revision to Third Gas Directive regulations would be applicable to the pipeline once it enters EU jurisdiction, and that the European Commission (EC) would have the right to negotiate an intergovernmental agreement with Russia to regulate the portion of the pipeline lying outside EU jurisdiction.

This follows up developments from June and September last year, in which a previous opinion suggested that the unamended Third Gas Directive did not apply.

In June 2017, the EC's directorate-general for energy requested a mandate from the Council of the EU to negotiate an agreement with Russia to govern the operation of Nord Stream 2. In response to the request, the Council's Legal Service published its opinion on the matter in September 2017.

That legal opinion concluded that the provisions of the Third Gas Directive as it stands do not apply to Nord Stream 2, and that “the envisaged agreement does not fall into an area of exclusive Union competence”, unless the Council decides to conclude such a competence on the basis of Article 194 of the Treaty on the Functioning of the EU (TFEU). 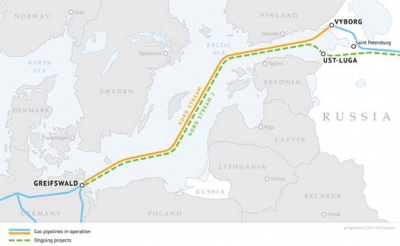 Finally, the Legal Service opinion of September 2017 noted that, if the Council were to seek to exercise a potential competence and conclude such an agreement, it ought to start by setting general principles rather than immediately adopting measures concerning a particular case – Nord Stream 2.

In November 2017, the EC adopted a proposal to revise Directive 2009/73/EC concerning common rules for the internal market in natural gas (the ‘Third Gas Directive’) and ensure that EU gas market legislation applies to offshore pipelines. The proposal could be interpreted as an attempt by the EC to follow the advice of Legal Services and set general principles for the regulation of offshore pipelines in general, ahead of a renewed effort to extend EU gas market regulations to the Nord Stream 2 pipeline in particular. For the revision of the Third Gas Directive to become law, it must be approved by both the European Parliament and the Council of the European Union.

The Legal Service March 1 offered the first of its two opinions on the EC proposal. Specifically, it addressed the question of whether it is compatible with the provisions of the UN Convention on the Law of the Sea (Unclos) relating to exclusive economic zones (EEZs).

According to Unclos, a state’s territorial waters extend up to 12 nautical miles from the coastline and are considered part of that state’s sovereign territory, while the EEZ of a coastal state extends further. That opinion concluded that “The Union does not have jurisdiction to apply energy law on unbundling, transparency, third-party access and regulated tariffs, which is unrelated to the economic exploitation of the EEZ, to pipelines crossing the EEZ of member states”.

The Legal Service's second opinion on the EC proposal came March 26, specifically addressing “the impact of its adoption on the allocation of competences between the EU and its member states”. The key points are quoted below:

The proposal is designed to establish a legal framework for the operation of pipelines to and from third countries within the EU jurisdiction, by rendering applicable to them the rules on unbundling, third party access, regulated tariffs and transparency with the objective of contributing to the security of supply of the EU. When part of a pipeline is not within the EU jurisdiction and conflicting legislation of two or more jurisdictions applies to the same pipeline, the conclusion of an intergovernmental agreement for the operation of a pipeline becomes necessary to resolve contradicting requirements.

In summary, the Legal Service appears to confirm that the revision of the Third Gas Directive would ensure that EU gas market legislation applies to pipelines to/from non-EU member states, when those pipelines are in EU jurisdiction. Where pipelines are not in EU jurisdiction, an international agreement may be used to resolve any contradictions between the regulatory regimes of the EU and the third country.

Because of the effect that such agreements may have on the functioning of the EU gas market, the EC would be within its rights to negotiate such international agreements, while individual EU member states would not. This would be a departure from the current situation, in which the Legal Service is of the opinion that the EC does not now have the legal right to conclude an agreement with Russia regarding the operation of Nord Stream 2.

Given that Nord Stream 2 only enters the territorial waters of EU member states around the Danish island of Bornholm and when it makes landfall on the German coast, the majority of the pipeline would operate in waters outside EU jurisdiction: the EEZs of Finland, Sweden, Denmark, and Germany. The application of the revised Third Gas Directive would therefore apply only to Nord Stream 2 around the island of Bornholm and in German territorial waters.

By extension, if EU jurisdiction – and the related EU gas market provisions regarding unbundling, third-party access, regulated tariffs and transparency – does not apply to Nord Stream 2 in the EEZs of EU member states, the EC proposal aims to create a basis for the conclusion of an agreement that would govern the operation of Nord Stream 2 outside EU jurisdiction: inside the EEZs of EU member states.

The real challenge for the EC will come if this situation arises, but the EC and the Russian government are unable to reach an agreement. In a related development, the Industry, Research and Energy Committee (ITRE) of the European Parliament held a vote March 21 on the committee’s draft report, which is a response to the EC's November 2017 proposal to revise the Third Gas Directive. After tabling 142 amendments to the EC's proposal, the draft report was adopted by the ITRE committee. This vote paved the way for negotiations with the EC, which, if successful, will lead to a vote on the matter in the European Parliament later this year.

Nord Stream 2 has been politicised from the very beginning, and proponents of the project claim this revision is essentially the EC trying a new tactic to take control, having been overruled by the Legal Service last September. There are also concerns about the expansion of EU power over the member states, as the new rules would affect other pipelines and interconnectors, not just Nord Stream 2. With this in mind, the ongoing debate over the revision will be key to watch in the power struggle.