The nine years since the 2009 take-pay gas contract between Russia and Ukraine started was momentous: hubs and freer markets have come and new traders have appeared but Ukraine's economy is a shadow of what it was.

Late December saw a landmark in Ukrainian – Russian gas relations when the Arbitration Institute of the Stockholm Chamber of Commerce made its final award in the long-running arbitration case relating to the gas supply contract between Gazprom and the Ukrainian state-owned wholesale gas importer, Naftogaz.

Following the award, both sides claimed victory in the arbitration case. Given that the award details have not been made public, the interpretation of the award requires examination of the competing claims of the two parties.

The lengthy Gazprom-Naftogaz dispute that had led to several disconnections in gas supply was resolved by the signature of new, ten-year gas supply and gas transit contracts in January 2009. The gas supply contract stipulated annual deliveries of 52bn m³ (with an 80% take-or-pay provision) at an oil-indexed price.

Over the five years that followed, Naftogaz challenged the oil-indexed pricing formula stipulated by the contract, and the delivery volumes – which far exceeded Ukraine’s gas import demand during this period as the economy worsened.

During the political turmoil of late 2013 and early 2014, Naftogaz accumulated debts for unpaid gas bills. While these debts were partly paid in the autumn of 2014 (as part of the negotiated ‘Winter Package’), Gazprom rejected Naftogaz’s claim that its payment completely cleared its debt. While the two sides agreed on the monetary value of the debts that had mounted in November-December 2013, they disagreed on the debts that grew in Q2 2014.

In July 2014, both Gazprom and Naftogaz launched arbitration proceedings at the Arbitration Institute of the Stockholm Chamber of Commerce. Gazprom sought to recover $4.45bn of outstanding debt for gas that had already been delivered as well as compensation for Naftogaz’s failure to adhere to the ‘take-or-pay’ terms of its gas supply contract since 2012.

For its part, Naftogaz claimed that it had overpaid for gas since 2010 and sought a rebate of $6bn. Naftogaz also planned to use arbitration to negotiate a lower gas price, so that it would not continue ‘overpaying’ for the remainder of its contract.

The key issues in contention were:

This price reduction leaves Naftogaz having to pay $2.18bn to Gazprom. This debt is for gas that Gazprom supplied to Naftogaz in November-December 2013 and Q2 2014, for which Naftogaz refused to pay because of the pricing dispute.

In accordance with the ‘Winter Package’ brokered by the European Commission in October 2014, Naftogaz agreed to pay Gazprom $3.1bn for gas received (but not paid for) during 2013-2014.

This sum of $3.1bn was considered by Naftogaz to be a complete payment for volumes received (based on Naftogaz’s own interpretation of what the gas price should be), while Gazprom considered the payment of $3.1bn to be only a partial payment, because while Gazprom and Naftogaz agreed on the volume of gas that had been supplied, Gazprom based its calculations on a higher gas price.

The award of $2.18bn to Gazprom (in addition to the $3.1bn received in late 2014) suggests that the tribunal had settled on a price that was higher than the one proposed by Naftogaz, but lower than the one demanded by Gazprom.

Regarding the price formula, neither Gazprom nor Naftogaz made reference to this in their statements. This could be interpreted as the retention of the original oil-indexed formula.

The base price (for January 2009, when the contract was signed) was calculated at $450/’000 m³ ($12.61/mn Btu), which seems to be based on a European netback price of $495/’000 m³. This price changes every quarter, on the basis of price reporting agency Platts’ prices for gasoil and heavy fuel oil with 1% sulphur content delivered to Italy’s coast over the previous three quarters, with no time lag.

Therefore, the price in January 2018 will reflect the average price of gasoil and heavy fuel oil between April and December 2017, and hence by how much these prices are above or below gasoil and heavy fuel oil prices between April and December 2008. This difference allows comparison with the base price of $450/’000 m³ in January 2009.

Using this proxy calculation, it is possible to estimate the contract price in the Gazprom-Naftogaz contract between January 2009 and January 2017 (and the discounts offered by Gazprom during that period), in relation to the price of Brent crude oil (see graph).

Price of gas in Gazprom-Naftogaz contract and comparative commodity prices 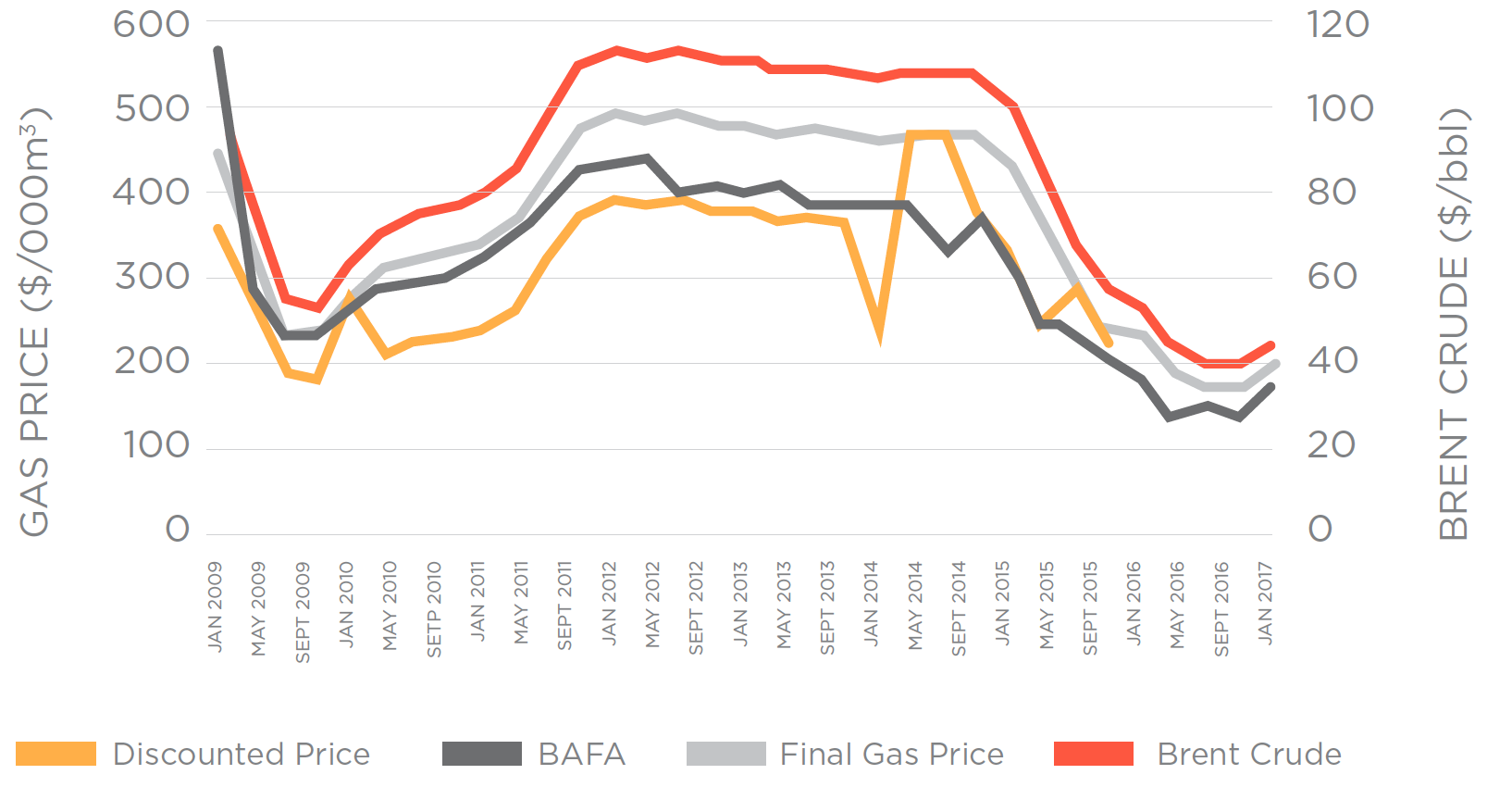 The contract volume has been reduced from 52bn m³/yr to 5bn m³/yr. The original contractual volume was equal to Ukraine’s gas imports in 2008. However, the contraction of the Ukrainian economy in 2009 led to a substantial decline in Ukrainian gas demand, thus lessening import demand. The reduction in the contractual volumes reflects the dramatic decline in Ukraine’s gas imports, and the development of competition in the form of imports from the European market.

However, the retention of a 5bn m³/yr contractual volume does mean that gas supplies directly from Russia to Ukraine will resume, and that Gazprom will be guaranteed sales to Ukraine during the final two years of the contract.

The take-or-pay provision has been retained and will now be applied to the 5bn m³/yr, meaning that Naftogaz must purchase at least 4bn m³/year from Gazprom. This would explain why the Gazprom deputy chairman, Alexander Medvedev, challenged the Naftogaz announcement that the ’take-or-pay’ provision had been removed from their contract, when speaking to the press in the aftermath of the interim arbitration ruling May 31.

Finally, the territorial restrictions – also known as destination clauses – that previously prevented Naftogaz from re-exporting gas it purchased from Gazprom have reportedly been removed from the contract.

This means that, if Naftogaz should find itself in a situation where the 4bn m³/yr minimum it must buy this year and next is too much for its domestic needs, it may attempt to recoup its expenditure by re-exporting it, depending on the prices at the hubs.