With its export options limited, Iran is once more talking about exporting some of its gas by pipeline to Oman, where, along with domestic gas, it may be liquefied for world markets.

The Iran to Oman gas pipeline is back. At least that is what Hamid Reza Araqi, managing director of the National Iranian Gas Company (NIGC), confirmed on January 13. Referring to the pipeline, he said: “Based on negotiations between Tehran and Muscat, Iran will carry out the onshore section and we are ready to begin works."

The beginning of this project was a memorandum of understanding for the export of natural gas from Iran to Oman, signed by the oil ministers of the two countries August 26, 2013 (Figure 1). A framework agreement to build the pipeline was subsequently signed in February 2014, but it was not until three years later, with the lifting of US sanctions in January 2016, that the pipeline regained momentum. It will carry about 10bn m³/yr for at least 15 years, with the option to increase this to 15 bn m3/yr. Most of the gas is destined for the Oman domestic market, but about one third may be exported as LNG following liquefaction by Oman LNG at its Qalhat plant, Fig 2. 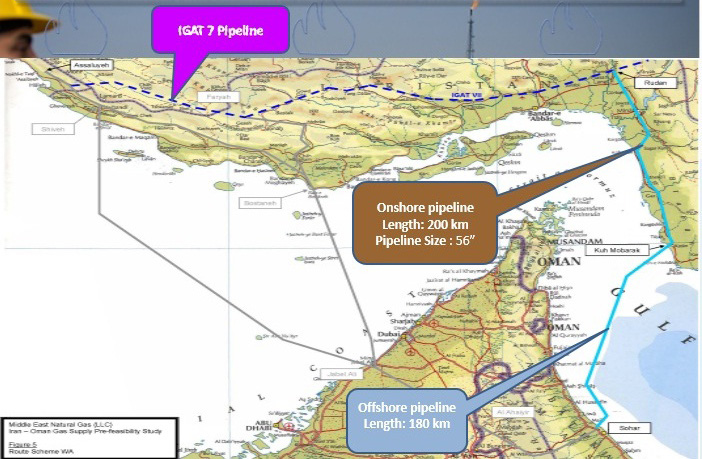 The plan is to construct the pipeline in two parts, onshore and offshore. The onshore part, which was the subject of NIOC’s announcement January 13, is about 200 km long and 56 inches in diameter, and will transfer gas from the Iranian Gas Trunkline 7 (Igat 7) to Kuhe Mubarak in the Hormozgan province, on the Gulf of Oman coast. From there, a 200-km 36-inch subsea pipeline will land the gas at Sohar in Oman.

According to the Iranian Offshore Engineering and Construction Company (IOEC), by the end of March 2016 it completed a desk study and started producing basic engineering documents related to the onshore part of the project.

At the end of November 2016 senior officials from Oman and Iran met in Tehran and discussed the export of Iranian gas to Oman. Present were also representatives of Shell, Total and Kogas, all shareholders in Oman LNG that would have interest in liquefying part of the gas, the terminal being below capacity.

By February 2017, at meetings in Tehran, attended by Iran’s minister of petroleum Bijan Zangeneh and Omani minister of oil and gas Mohammed bin Hamad al-Rumhi, the two countries signed a new agreement, reaffirming the 2013 agreement, to jointly build the subsea part of the pipeline. According to NIGC the project is expected to be completed by 2020, two years after start of construction, at an estimated cost of $1.2bn.

It was also agreed to reroute the pipeline to avoid waters controlled by the UAE, presumably as a result of the political conflict between Iran and UAE’s ally Saudi Arabia. The impact of this is to increase the project water depth from 300 m to about 1000 m, but will also result in a somewhat shorter route. The Iranian petroleum minister confirmed that this change has no economic impact on the project. But it appears that there are still some differences over the delivery price for the Iranian gas.

The meetings were again attended by representatives of Shell, Total and Kogas, but also Mitsui and Uniper. Iran’s petroleum minister, Bijan Zanganeh, said they presented their own proposals for the project.

According to the National Iranian Oil Company (NIOC), other international companies may also be interested in the project, including Gazprom. Ali Kardor, managing director of NIOC, said last December that Iran is interested in Gazprom’s participation, adding that "There has been huge interest in the prospects of the joint construction of Iran-Pakistan-India and Iran-Oman gas pipelines." In November 2017 Gazprom and NIOC signed a memorandum of understanding for a study concerning co-operation in the development of gas fields in Iran, gas transportation and monetization.

At a meeting held in Muscat in December 2017, the Iranian ambassador to Oman and the Omani oil minister discussed the project and ways to expedite its implementation. This, perhaps, is what led to the announcement by NIGC January 13 that it is ready to start construction of the onshore pipeline.

Despite NIGC’s statement that gas deliveries are expected to start by 2020, the prospect of Iranian gas arriving in Oman anytime soon is not very high, given that agreement on the gas price and the construction of the subsea pipeline are still at an early stage.

However, given Oman's need for gas and with Shell, Total and Kogas, shareholders in Oman LNG, keen to invest in the scheme, this project has a better chance of being implemented than others, such as the Iran to India pipeline.