After false dawns galore, Russia is en route to becoming a world-class LNG exporter before the end of the decade – and one of the top four by 2025 – thanks to foreign investment, domestic technology and unconventional financing.

The LNG industry has seen big surprises in the last decade or two. Take Qatar, which came to dominate the industry in just 20 years; or the US, challenging Qatar as an exporter, when in 2006 it was expected to be importing as much as Japan by now. Now Russia could be one of the world’s top five exporters as soon as 2020 and one of the top four by 2025.

What makes this story so surprising is that the company driving this growth is not gas behemoth Gazprom, which retains monopoly of the pipeline gas exports; but independent gas producer Novatek, a relative newcomer.

Along with French and Chinese partners, Novatek already leads the Yamal LNG project, the first train of which came online in December “on time and on budget.” It has since performed impressively well. Indeed, the overall project is making such good progress that the construction schedule for train two has been brought forward by three months and for train three by six months (see table below). In the hostile environment of Sabetta on the east coast of the Yamal peninsula, 600 miles inside the Arctic Circle, it is nothing short of remarkable.

Sabetta is ice-bound for up to nine months of the year. In winter temperatures can fall as low as ‑57°C; water freezes in seconds and propane is naturally a liquid. Wind gusts can reach speeds of 144 km/h.

The acceleration of the schedule means that all three of the project’s 5.5 mn mt/yr trains should be up and running by the first quarter of next year, giving a total capacity of 16.5 mn mt/yr. A fourth train with capacity of 0.9 mn mt/yr is expected to come on stream later in the year – employing a new “Arctic Cascade” liquefaction process recently patented by Novatek’s engineers. Add to that Vysotsk LNG, a small 0.66mn mt/yr project that Novatek is undertaking with Gazprombank near Saint Petersburg, also due online next year, and the total rises to 18.1 mn mt/yr.

Russia already has the two-train Sakhalin Energy project, which has been operating since 2009 and has a nameplate capacity of 9.6mn mt/yr (in 2017 it produced 11.3 mn mt). So by the end of 2019, if all goes to plan, Russian nameplate capacity will be 27.7mn mt/yr.

For Novatek, Yamal LNG is just the beginning. The company outlined its strategy “to build a formidable LNG platform” at a presentation in December – led by chairman of the management board Leonid Mikhelson and CFO Mark Gyetvay – and confirmed it last month at a conference in Moscow.

“Our big plan is to create a new LNG centre from Russia’s Arctic zone that will rival the main LNG export centres of Qatar, Australia and the US,” says Gyetvay. “We will achieve this goal by utilising technology and innovation to unlock our prolific hydrocarbon resource base on the Yamal and Gydan peninsulas.”

Key objectives include building an LNG project execution capability within Russia, at Murmansk, along with the establishment of a benchmark Russian FOB hub price at a proposed trans-shipment terminal at Kamchatka (see map). 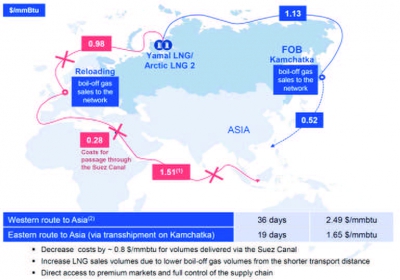 To optimise shipping and storage, Novatek is planning a trans-shipment terminal at Kamchatka, with a final investment decision expected in 2019. Commissioning is due in 2022/23, to coincide with the start-up of Arctic LNG 2. The terminal would be 4,000 nautical miles from Sabetta and operating costs would be covered by sale of boil-off gas to the local pipeline network.

By 2030, Novatek intends to have constructed 55mn mt/yr of liquefaction capacity, requiring additional capital investment of roubles 2.5-2.8 trillion ($40-45bn). To realise this much capacity, the company’s natural gas production will need to rise from 63bn m³ this year to more than 125 bn m³ by 2030.

“Our intention is clearly not to finance 100% of the capital cost programmes,” says Gyetvay. “We will sell interests in each of our future LNG projects at value accretive multiples for our shareholders.”

The company is already well on its way. On May 24 at the St Petersburg International Economic Forum, Novatek’s Leonid Mikhelson and Total CEO Patrick Pouyanne signed a binding agreement giving the French company a direct 10% interest in Arctic LNG 2, Novatek’s next foray into developing its Arctic gas reserves for export as LNG.

Total has an option to increase that to 15% if Novatek chooses to reduce its interest to below 60%. Total has a direct 20% interest in Yamal LNG and holds a stake of 19% in Novatek, so its actual interest in Arctic 2 will be 21.5%. Moreover, its engineers have been playing key roles in the success of Yamal LNG. As Mikhelson commented at the ceremony: “The entry of such a professional partner to Arctic LNG 2 at such an early stage confirms the outstanding attractiveness of LNG projects on the Yamal and Gydan peninsulas.”

Total adds that it has agreed with Novatek that it will have the opportunity to acquire a 10%-15% direct interest in future projects in Yamal and Gydan. The Arctic 2 LNG deal follows a pattern. Total was the first partner to join Novatek in Yamal LNG in 2011 when it took its 20% interest, well before any offtake or finance agreements were signed. It was later joined by China National Petroleum Corporation (CNPC, 20%) and China’s Silk Road Fund (9.9%).

Arctic LNG 2 will be larger than Yamal LNG and will use different technologies, mainly because Novatek wants to get specific capital cost down by 30% but also because building an LNG project execution capability within Russia is a high priority. FID on the $25.5 bn project is expected next year, with the first train starting up in 2023.

“The GBS concept will maximise the use of local content to reduce logistics and construction costs and minimise onshore work to limit our environmental footprint,” says Gyetvay: “Our primary goal is to significantly reduce our overall liquefaction cost to a range of $650-$750/mt/yr capacity.” Using a GBS concept is part of that plan, as well as using domestic equipment as far as possible: “Our primary aim – either locally or internationally – is to reduce the overall cost to construct these platforms.”

Novatek will also have its eye on existing and possible future sanctions, given the complications it had to deal with on Yamal LNG, especially regarding finance. Sanctions imposed in 2014 by the US and the European Union after Russia’s annexation of Crimea meant that for a long time there were question marks over how the project sponsors would overcome financing obstacles. In the end, they did so by sourcing finance from institutions in China, Russia, Japan and Europe.

So what about all the other LNG projects proposed for Russia, especially those that would involve Gazprom? Were they all to go ahead, Russia would have LNG export capacity of some 100mn mt/yr by 2030.

On all fronts, recent progress has been underwhelming. Gazprom and Shell have begun marketing a proposed third train at Sakhalin Energy but no date has yet been set for FID. Vladivostok LNG appears to be on indefinite hold. Baltic LNG is the subject of a joint feasibility study with Shell but there is little sense of urgency around the project. Shtokman was cancelled years ago, in response to the US shale gale: that project, also with Total’s involvement, was aimed at the US. Rosneft, meanwhile, says it is still pursuing Far Eastern LNG and Pechora LNG, but it too is vague about what might happen and when.

So all eyes are on Novatek, not least those of Russia’s newly re-elected president, Vladimir Putin, who launched Yamal LNG last December and has made big claims for Russia’s future place in the LNG exporters’ community.