The Southern Gas Corridor (SGC) is now just starting up enabling for the first time gas to flow from the Caspian Sea into southern Europe, running from Azerbaijan to Georgia, Turkey and Greece. How do you view its success?

We see the SCG as an excellent way of piping gas into Europe and providing optionality for European gas buyers.

But with the availability of even US LNG, unthought of when the SGC was conceived, would it still make sense today?

Even with the rise of LNG on the markets today, I think you can still make a business case for SGC gas – I think that you can still see an appetite for SGC gas today. With the way we see the energy mix developing in Europe, we see that gas will be a large part of that mix. We are very interested in diversification of supply, and we see this as all complementary.

Energy Bureau Deputy Assistant Secretary Sandra Oudkirk was present at the first gas event in Baku at the end of May and plans to attend a similar event in Turkey. These gas developments are really important, and it’s interesting to see how encouraged these countries are when they can develop their own resources and can help. It’s a positive message.

But it does cross some struggling countries and there are security risks.

Energy developers are not weak-hearted people. These guys have steel in their veins, and they make billion dollar decisions in parts of the world that are politically risky. It’s just the nature of energy.

What sort of a message does it send Gazprom?

We don’t spend time thinking about how Russia will react to projects such as the SGC. We proceed with what makes commercial sense and, hopefully, what contributes to the diversity of energy supply that I previously talked about. We are about moving forward with energy security in Europe. Overreliance on Russian gas is a high concern of ours, and the Europeans are quite aware of how Russia has deployed energy in a hostile strategic manner. It is clear to us that if the Russians have done it before (taken hostile actions), they will do it again.

Regarding the Stockholm arbitration ruling, Gazprom said that was political in nature and aimed at propping up Ukraine. What is the US position on supporting Ukraine?

The first thing I would point out is that [German chancellor] Angela Merkel recently noted the political nature of gas supplies to Europe and gas transits through Ukraine. She acknowledged this in April and said there needed to be some way to account for the lost gas transit through Ukraine.

Our role is to work with our European allies to ensure that the Russian incursion in Crimea is not rewarded with more business. The idea that the incursion would remain is not the right policy, and is not a good policy for Europe. We all agree on that. The question is what can be done about it.

The gas that goes through Ukraine is not just molecules; it represents a lot of money to Ukraine’s budget. Ukraine has been very involved in making reforms and improvements, and we’ve been helping them with that.

We’ve gone into Ukraine and explained enhancing corporate governance to ensure that the success they have seen in obtaining transit revenues for government coffers continues and improves. We’ve been working with them on compliance, and in getting the appropriate oversight boards in place.

Another thing: it’s not just the revenue; it’s a big economic tie to Europe, a strong bond that is very important which we do not want to see go away. We want to see transit continued through Ukraine.

But Ukraine still has the old Soviet-era problem of oligarchs influencing actions of government.

Ukraine has succeeded in reforms in other areas, such as health and education, and it’s time to focus on energy. We are now seeing revenues, including from transit, reaching government coffers.

The state oil and gas company, Naftogaz, once a large cost centre in Ukraine’s budget, has recently become one of its largest revenue generators. It must be recognised that Ukraine has made tremendous progress, and it is essential for the Ukrainians to continue on this path of progress in order to continue functioning.

If they fail to live up to expectations, such as reducing corruption and maintaining normal corporate practices, it becomes hard for us to promote doing business in Ukraine as a reliable partner.

Can you see Ukraine buying gas from Russia or transiting it in the future?

The Ukrainians will have to decide if they want future gas deals with Russia. Our concern is that the enforceability of any such deal would be suspect. Looking at Russia’s recent history, such as in failing to supply gas volumes to Ukraine after the Stockholm decision, we doubt the ability to enforce any such contracts.

International law is great. But if there is one thing to remember, it is that if you cannot enforce an international contract, it’s meaningless. We need to ensure that all parties are living up to those contracts.

What about the uncertainty facing investors overseas, such as US sanctions on Nord Stream 2 and on Iran, where Total wants to develop a phase of South Pars?

It would be inappropriate to comment on a potential request from Total. Regarding NS2, I refer you to the existing guidance that the US government has already published for companies to make decisions. We’ve talked with many companies, and they all know what the potential risks are.

There was comment that the Chinese plans to develop gas and to buy LNG from Alaska were just a political announcement to show something had been achieved by the president's trip. Can you comment on that?

This is a major energy project. There is a lot of technical work remaining on that agreement for Alaskan LNG which was announced by the Department of Commerce last November, and I understand that it’s moving along. This is a private sector agreement, so we are not involved in the details. Our main role is with the introductions of the participants.

But it’s always helpful to bring the trade deficit more into balance. It is one of the goals of this administration. But I would not only focus on the Chinese; we welcome all investment. We want to make sure that everyone feels welcome to invest in the US.

I have met with executives from European and Asian energy companies. The first thing they tell me is how much they are investing in the US and I thank them for that. We welcome their investment, they know that we have the right investment climate to give them a return on their money.

At the State Department, we try to replicate the legal and regulatory frameworks that we have here in the US, and export those so that countries can have the same types of investment climate in order to make improvements in their economies similar to the improvement that we have made here.

Let me give you an example. If you have a massive energy discovery as what occurred in Guyana where you have a country with virtually no infrastructure and now has over 3bn known recoverable barrels of crude, we have helped them with their reporting structures, with environmental regulations. They now have systems in place where they can benefit from their resources responsibly and use that income responsibly.

We are providing similar assistance around the world, such as in connecting the grids in Central America. In Argentina, for example, we are helping them with fracking and how they can benefit from their natural resources. In some cases, what we have done is use our convening authority to bring the relevant parties together, including potential investors, akin to public-private partnerships, where both sides realize they can help one another. There are definite challenges, but we can’t solve all the problems. But we do try to focus on where our assistance can provide the greatest impact and where we can help stabilise regions.

What is the US doing for clean energy and related technology?

We think it is important not to turn away from certain energies because they are not fashionable. For example, people use coal. So let’s help them use coal in a way that minimises the environmental impact. But, we’re not going to denigrate coal; it is one of the energy sources that people use in this world – that’s just a fact. Regarding carbon capture and storage technology, that is more of a Department of Energy question. Still, the US government works together to promote those technologies. 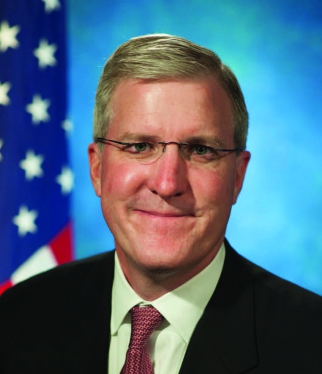 What, if anything, is the US doing to mitigate fuel poverty?

We’ve been very involved in such programmes. Probably the number one programme in this respect is Power Africa where we, the US government, has gone in and done an amazing job using a small amount of money to work with the private sector to make investments. We have had a huge impact in this area.

Power Africa is a US government initiative that comprises 12 Departments and Agencies, 140 private sector companies, and 16 bilateral and multilateral development partners. The main goal is to help sub-Sahara Africa achieve universal energy access which is a key priority in the president's National Security Strategy.

The Bureau of Energy Resources, as well as the US Agency for International Development, are key participants from the State Department.

To date, Power Africa has helped add over 11mn connections via 95 gas and renewable projects, which means that more than 50mn people now have access to electricity, a truly remarkable accomplishment. This is a great example of the all-of-the-above approach I mentioned earlier, where technology can make a significant difference for millions of people.

We have seen the speed of development of LNG export facilities. Why are US crude prices so low relative to Dated Brent?

If it were up to the Trump Administration, we would have already built the Keystone pipeline. We would have had a lot more flexibility in oil exports and refining if that pipeline had been built. And we are working very hard to get that done now, especially since it would increase our options on bringing Canadian crude to the US which now would need to arrive by rail, which is less environmentally sound as well as expensive.

There are things we are doing, such as with the pipeline, which will make the US politically and economically much stronger.

This is the second time that Washington is hosting the World Gas Conference. Is the event this time around a significant one for your department?

In 1988 we hosted the event, and president Ronald Reagan came. We will have an entire team from the Bureau of Energy Resources at the event – all hands on deck – and we are co-ordinating with the interagency. The State Department will also be hosting an event here at the State Department for ministers which will be co-hosted by Secretary Perry from the Department of Energy. We are expending a large effort on this event, and we are pleased to see it return to Washington DC after a 30 year hiatus.

Thank you very much, Mr McCarrick.