NGW met Luis Bertran Rafecas during the International Gas Union’s Workshop in Cairo and asked him about IGU’s focus on the role of gas in the future energy mix, in the run-up to the World Gas Conference in Washington.

You have been at your new position at IGU since November 2016. When you took up this position you said you relished the opportunity "to further advance the role of natural gas in the global energy mix." How are you finding this and how different is your new role from your work at Gas Natural Fenosa?

First of all, it is an honour for me to serve the global natural gas industry as IGU Secretary General, especially with IGU advancing the role of gas in the future sustainable energy mix as you said.

The work I am now responsible for is very different from what I did at Gas Natural Fenosa, where I had mostly technical responsibilities. But during the last ten years I also worked in commercial areas, both in retail and wholesale, with big consumers and traders, and in managing subsidiaries. This gave me good experience in advocating, explaining the advantages of gas, meeting media and in managing full areas of responsibilities of small and medium enterprises, including accounts, human resources, and so on, which complemented my technical background in the gas value chain.

These now back me up in managing IGU administrative, advocacy, legal and financial areas as well as the activities of committees and associations bodies.

Global energy is in a state of transformation. How are you managing this transformation while still retaining a major role for gas?

Since I took over the IGU Secretariat, I reorganised its activities into three areas: IGU Events, IGU Advocacy and Services to Members. We have reinforced all of them, but specifically in Advocacy we have deployed a new strategy on communications and outreach activities. We have allocated almost all new IGU income, derived from increased member fees, to the support of advocacy activities.

Today, around half of IGU budget goes to advocacy, which was only a complementary activity in 2015. Now we have the support of an external publicity agency and we have also appointed a public affairs director to raise our voice. This has been our most important transformation during the last three years.

There is abundance of gas all over the world. Some say that some gas assets will have to remain stranded, unless they are developed in a cost effective manner. How is IGU grappling with this? How does IGU see the future of oil and gas?

IGU is supporting the growth of the gas industry and promoting transparency of global markets including the development of new markets. Shale gas has been the most important breakthrough in terms of gas exploration, production and increased reserves. But also LNG has been growing as the cost of the LNG chain has come down (Figure 1). 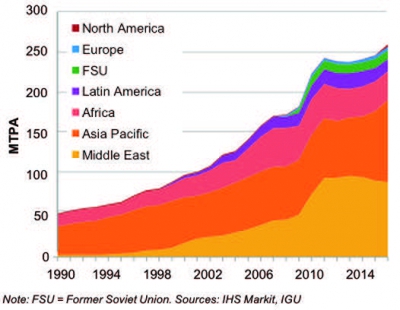 Having said that, globally the abundance of gas and affordable prices are driving gas growth. IGU expects gas prices to continue converging and staying at very competitive levels. We believe that the natural gas industry has a great future. In some areas, natural gas is being used as back-up to renewables to deal with intermittency. However, the international price level will continue to be led by LNG exports from USA, Qatar, Australia and likely Russia.

Many forecasts see a bright future for gas provided it remains affordable against coal and renewables. What steps are your members taking to achieve this?

Compared with coal, gas is unbeatable in terms of reducing air pollutants and improving air quality, which is a key matter for quality of life in cities, but also in greatly reducing CO2 emissions. China is phasing out coal in order to improve the quality of the air in its cities. When all externalities and costs are taken into account, the advantages of gas are there to be seen.

Regarding renewables, we recognise their leading role and growth in power generation over the coming decades, but we see gas as the best partner for renewables, with the two growing together.

Gas complements renewables ensuring security of supply, avoiding black-outs and providing energy storage. We should not of course forget that gas is itself a renewable fuel, when it takes the form of biogas, biomethane and synthetic gas.

Increasingly this involves LNG. How do you see LNG competing post-2020?

LNG has led the growth and will continue doing so. The global reach of LNG has helped reduce the spread of prices between the US, EU and Asian markets (Figure 2) and has given access to natural gas to new importing countries through affordable and rapidly deployable floating storage and regasification units. 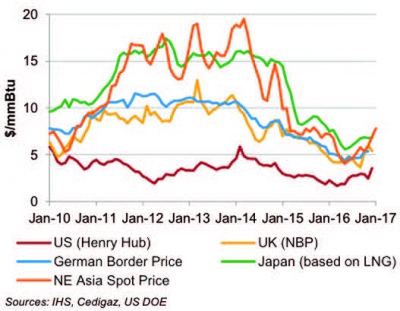 New, more efficient LNG technologies together with plentiful supply of shale gas will be facilitating the growth of gas in global markets after 2020.

You identified a key challenge: over the next 20 years, gas should displace coal. That will be particularly tough, especially in Asia, India and China. Coal is becoming more competitive and cheap, and even if global consumption does not increase, according to the BP Energy Outlook it is holding its position. What are you doing to achieve this goal, which is so critical to the future of gas?

I said something about it earlier on. Really, in the short term gas is the solution for improving air quality in megacities. It is expected that three quarters of the world’s population will be living in cities by 2050. Thus, gas is needed in all of these areas. Further, when considering quality of life, we recommend taking into account the health cost of using coal in the global cost balance. This is another important area where natural gas has major advantages over coal.

Your flagship conference is the World Gas Conference, this year taking place in Washington DC in June. On your website you say "WGC 2018 will be the most definitive gathering of influential leaders, policy-makers, buyers, sellers and experts from around the globe." What do you expect the highlights to be?

WGC 2018 is to be held in US, and the timing was chosen to coincide with the American Gas Association (AGA) reaching and celebrating its 100th anniversary. In addition, the US has reached record gas production, becoming a net gas exporter in 2017 and its LNG exports hit new records last year (Figure 3). Also, it will be first time that the WGC has the participation of global policy makers from around the world as never seen before, with active engagement from political authorities in the US to deliver key messages to IGU audiences.

Figure 3: The US became net natural gas exporter in 2017 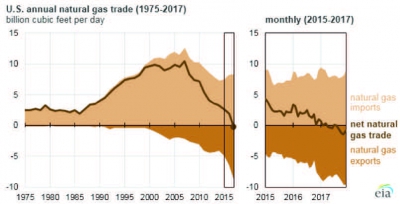 We also have participation by many energy ministers led by the US Secretary of Energy Rick Perry who will be attending the opening ceremony of WGC 2018. That creates the perfect atmosphere to explain the key message of the contribution that gas can make to economic development, to better urban air quality, extending access to energy and easing fuel poverty.

And all this while supporting the growth of renewables and providing security of supply at an affordable cost. Gas is a net contributor to the fight against climate change. IGU is also planning to release the next edition of its influential World LNG Report during WGC 2018 in Washington. We are planning a truly great and successful event this year.

LNG as a fuel in transport and shipping is gaining market share. What is IGU doing to promote this?

IGU is collaborating with NGV Global in areas that include the scope of marine transport. IGU has also created a specific subgroup under its Utilization Committee dedicated to marine transport, as the market is growing. In addition, small scale LNG is now contributing to the development of new bunkering markets with ferries and ships, increasing the use of natural gas in powering ships. So, IGU is covering the matter extensively and we are supporting the development of this market from all angles.

Future gas and LNG prices are key to ensuring a bright future for gas. Are you updating your 'Wholesale Gas Price Survey Report'?

Yes, we are working to ensure the new edition of the report is ready for WGC 2018 in Washington. Also, IGU intends to present the updated Global Balance Supply and Demand Report during WGC 2018. So, as you see, many new reports will be ready to be released during this IGU flagship event.

Can natural gas retain a major footing in power generation in the longer term against renewables combined with ever-increasing capacity batteries? Can any deficit be recovered from increased use in other sectors?

Most forecasts in energy outlooks from different agencies and important players give a positive picture on the evolution of the global gas market in the coming years.

Regarding power generation, we are highlighting the great advantages that natural gas offers to this industry in terms of low cost investment, flexibility, low costs and security of supply working together with renewables, contributing to the improvement of air quality. We encourage the authorities to take these advantages into account when designing energy policies, which lead to a sustainable future energy mix, where gas should play a key role in supporting the energy system. 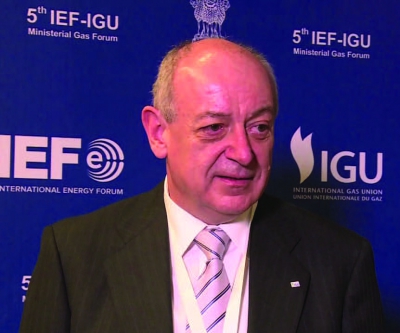 What are the challenges posed by COP21 and the Paris Climate Agreement on gas and how is IGU addressing these?

Part of this question was answered above. Gas will continue playing a very important role in power generation reducing CO2 emissions through coal to gas switching in power plants and with gas supporting renewable growth ensuring security of supply in terms of intermittency.

Also, looking at the medium and long term, biogas, and biomethane will play a role as green gas, which means that gas is itself a renewable energy resource.  Furthermore, gas could be produced by renewable sources, when the demand doesn’t consume all production, as a kind of energy storage in the form of synthetic gas.

All of these new technologies make gas a key contributor to reaching the goals of the Paris Climate Agreement. So, IGU will continue raising the profile and voice of gas and in developing and disseminating information on how gas should contribute to a sustainable future energy mix globally.