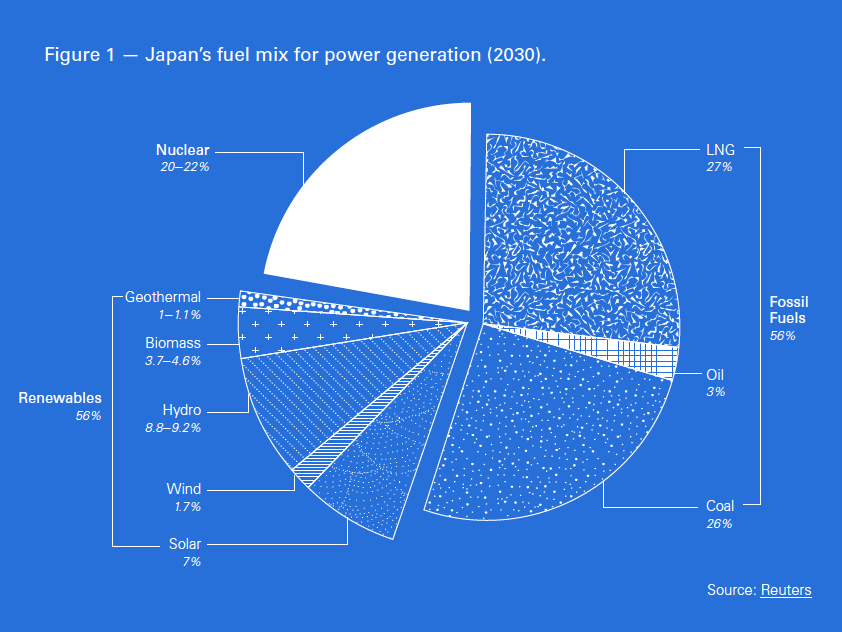 This is the country’s fifth energy plan and it was published after approval by the Japanese cabinet and a public consultation. In Japan, the government is required by law to re-evaluate and publish a revised strategic energy plan at least every three years. It is an important document as it is used by government departments and industry to guide investments and as a planning benchmark. The last time the plan was revised was in 2014.

A comparison of pre- and post-Fukushima power energy mix with the 2030 NEP targets shows a marked shift from fossil fuels to renewables, but with nuclear gradually regaining its position (figure 2). This supports the view that energy security is the key driver behind this through the containment of fossil fuel import dependence. In a speech earlier this year, Japan’s foreign minister, Taro Kono, said that the country largely “prioritised keeping the status quo [in its energy mix] for fear of change.”

Japan’s primary energy consumption over the period to 2030 is expected to remain flat, even with the government’s optimistic forecast that GDP will grow by about 1.7%/yr. But even so, Japan, as the world’s third largest economy, will still be a major player in the global energy market. 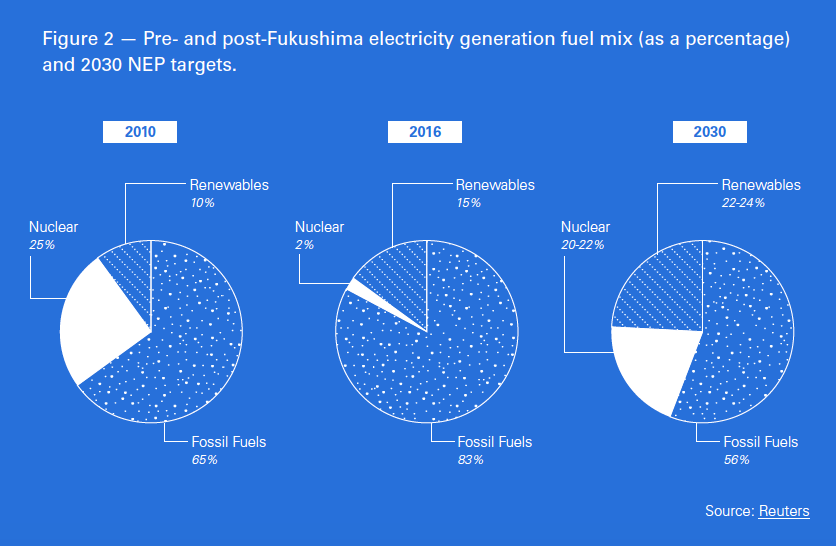 The changes in Japan’s energy mix brought about by the 2030 NEP are more clearly illustrated in Figure 1. LNG and coal go back to pre-Fukushima levels; oil is drastically reduced; and the recovery of nuclear is limited, shifting more power generation to renewables. But nuclear still retains a very significant role.

Post-Fukushima, substituting nuclear power with imported fossil fuels led to higher electricity prices for business and consumers – some of the highest, in comparison with other OECD countries – higher government debt, and losses for electricity utilities. In the three years following the Fukushima disaster, Japan spent an additional annual average of about $30bn on fossil fuel imports.

In addition to environmental benefits, this is one of the factors that has led to the 2030 power energy mix (figure 3), with the fossil fuel share reduced from 83% in 2016 to 56% in 2030. The government expects the restart of nuclear power and increase in the use of renewables to bring electricity costs further down and increase Japan’s competitiveness and self-sufficiency.

The most important objective driving the 2030 NEP appears to be energy security. It states that Japan needs to secure stable energy supplies to support economic activity and national security, while also ensuring the safety of its nuclear power generation. It also targets diversification of energy supplies and cutting the dependence on imports to the bare minimum.

Ever since the 1973 Arab oil embargo Japan has been very conscious of the importance of energy security. In addition, with an ever stronger and more assertive neighbour, China – now the world’s largest energy importer – Japan needs to limit risks to its own energy supply and that means diversification and limiting dependence on fossil fuel imports.

A measure of this dependence is the self-sufficiency rate, defined as the component of primary energy produced domestically. In Japan’s case it is mostly through nuclear and renewables. 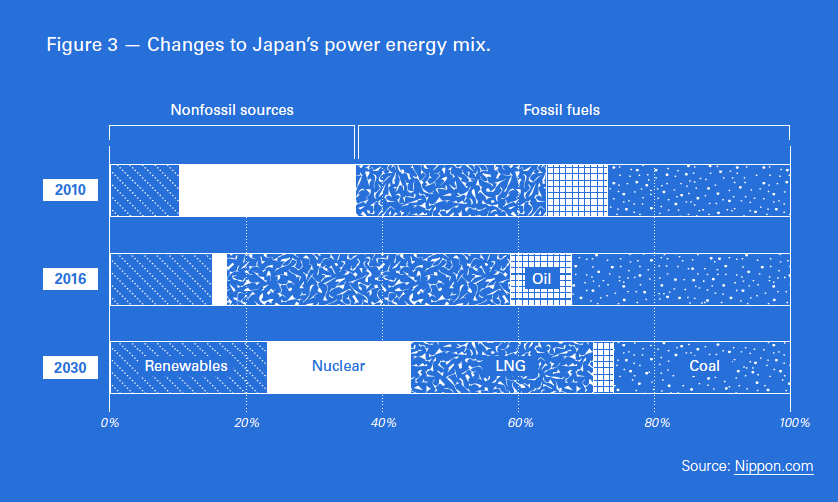 The historical composition of Japan's primary energy is shown in Figure 3. This shows the high dependence on fossil fuels. Following the 2011 Great East Japan Earthquake, Japan’s self-sufficiency declined substantially and reached a low of 6.1% in 2013. The target now is to bring self-sufficiency up to a quarter by 2030. This should be achievable if the contribution of nuclear and renewables in power production actually goes up to 40%-46%, as provided for in the 2030 NEP.

In order to improve self-sufficiency, Japan is also researching development of domestic energy resources, including methane hydrates, that are showing promise. 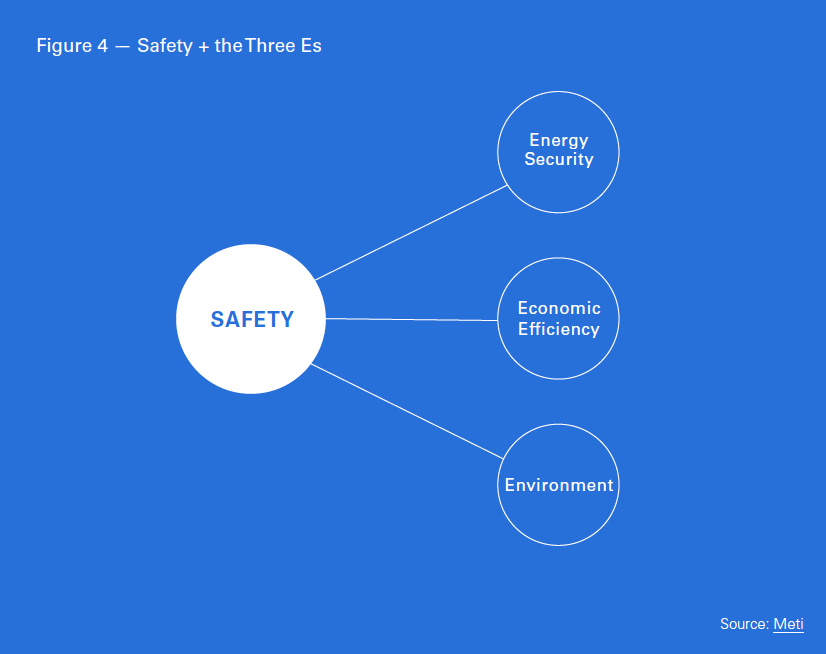 It is evident that the Japanese government still sees nuclear power playing an important role in the country’s energy mix, despite the fact that it remains controversial (see figure 2). It also contributes to meeting its environmental targets. The 2030 NEP identifies nuclear power as "an important base-load energy source."

While acknowledging safety concerns that mean Japan must limit dependence on nuclear power “as much as possible,” there is no getting away from the fact that nuclear is one of the few alternatives to fossil fuels and their problematic emissions that also improves self-sufficiency.

Following the 2011 earthquake and the Fukushima accident, all Japan’s nuclear reactors were shut down. Since then, eight have come back into operation. On July 4, Japan's Nuclear Regulation Authority (NRA) gave the green light to the restart the 40-year old Tokai No. 2 nuclear power plant northeast of Tokyo. But the start of operations is not expected before March 2021, when the work on improving its safety is due to be completed. 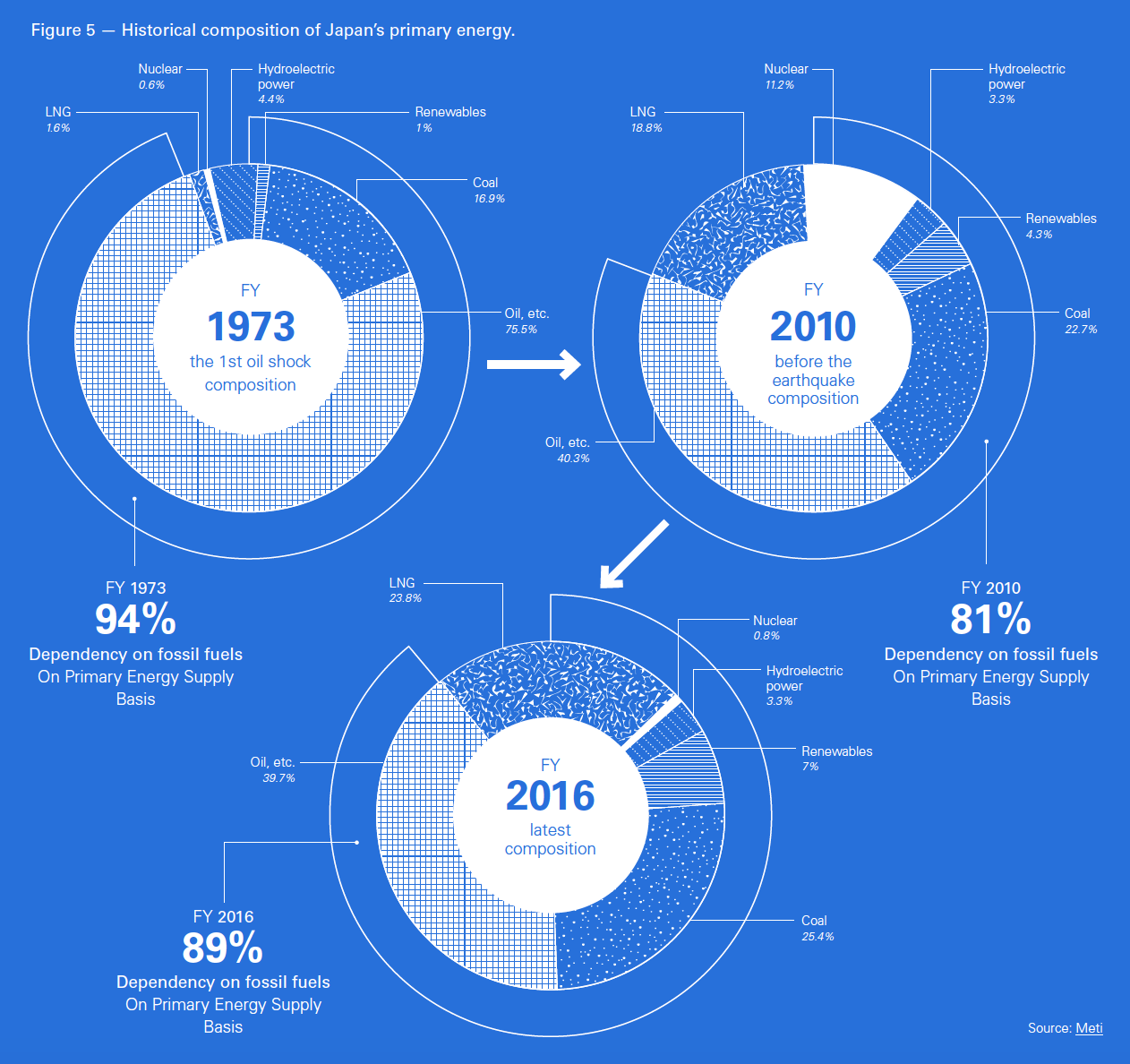 There are 39 operable reactors, but the Japanese government said that any units seeking to restart must meet new regulatory safety standards before restarting. Nuclear operators also have been seeking approval from local governments before beginning plans to restart reactors, which poses additional challenges.

Nuclear appears to be the big winner in this new 2030 NEP. The government’s confirmation that nuclear power will remain a key element is expected to usher in a new wave of nuclear power plant restarts. In order to achieve the 20% to 22% target, it is estimated that at least 30 reactors need to be reactivated. But this may be difficult to achieve.

There is no provision for building nuclear plants, but the door appears to have been left open. Policy recommendations made during the debate leading to the plan included "the maintenance and strengthening of on-the-job skill built through continuing the operation of current locations" – a phrase inserted to preserve the worker expertise and technology for the future of nuclear plants.

Public opinion against nuclear power is still widespread, but there is also concern about the high cost of electricity, which may benefit from the return of nuclear power. It remains a controversial issue, and regaining public trust is a challenge, but approval of the new plan may tilt the balance.

Fossil fuel contribution to Japan’s power energy mix will fall from 83% in 2016 to 56% in 2030 impacting future LNG demand, according to the plan (figure 2). In fact, Japan’s LNG imports fell by over 10% over the last year, as more nuclear power plants returned to service.

But coal power is stubbornly holding its grip. The plan envisages that coal will be producing 26% of Japan’s power by 2030, close the pre-Fukushima levels (see Figure 3), but lower than the 30.4% level achieved in 2017.

The country opened eight new coal-fired power plants during the last two years and has plans to open another 36 in the next ten. These can supply more power than the 26% designated in the plan, and probably will if nuclear fails to meet its own target of 20% to 22% in the teeth of public and regional government resistance.

This may be driven by energy security concerns, driving diversification of supplies but also by price. This was the message by the head of Japan’s Jera, Yuji Kakimi, in September 2017. He warned that LNG producers should become more competitive on price. He said: “The price of LNG has to be reasonable and there needs to be flexibility,” adding that “compared to coal, as a fuel source for electricity, gas is about 1.5 times more expensive, even at $6/mn Btu…. At $10… it isn’t economically competitive at all.”

This and fear for security of supplies, in addition to environmental issues, are what is driving the continued reliance on coal in India, China and Japan. Evidently coal still matters in Asia.

Even though there are claims that reliance on coal will make it difficult for Japan to fulfill its pledge to cut greenhouse gas emissions, the industry claims it is limiting emissions by improving plant efficiency, building clean coal plants and considering systems for capturing carbon.

However, building coal plants is not only out of step with other major economies around the world, but it, too, is meeting considerable domestic resistance. It remains to be seen what is practically achievable given the changing international, domestic and business environment.

Renewables were designated as a “main source of power generation” for the first time in a Japan energy plan. This is seen as a major shift in government policy. For the first time it recognises that in the future renewable energy has a role to play as a mainstream power source and not just as auxiliary power.

Japan’s target is to accelerate renewable energy development to 22% to 24% of the power energy mix, in comparison with about 15% in 2016 (see figure 2). This will help lower dependence on fossil fuels and nuclear power, contributing to higher self-sufficiency and energy security and in the reduction of carbon emissions.

An example is the Yamakura dam floating solar project (see Figure 6), the biggest floating solar plant in Japan, covering 180,000 m². It began operating in March and will be generating 16.2 GWh/yr. 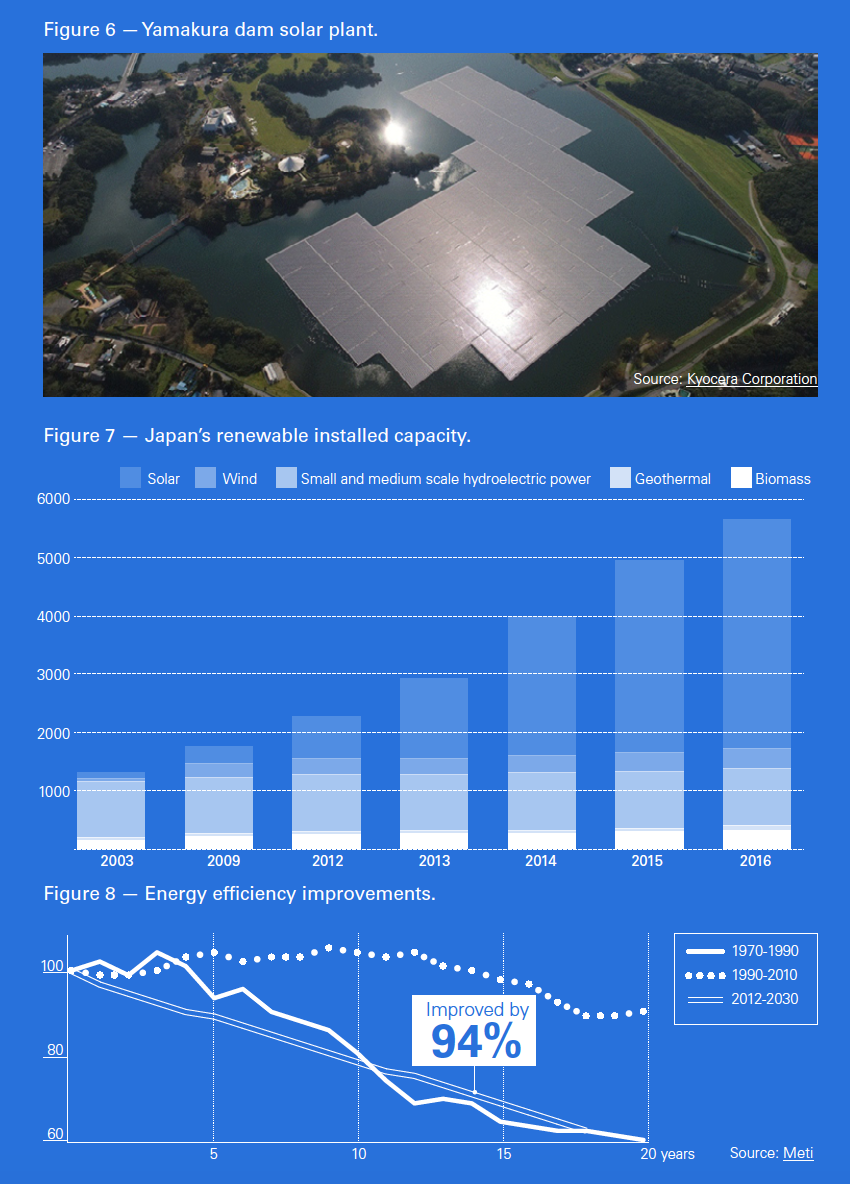 Following the introduction of feed-in tariffs, renewable power generation has been growing rapidly in Japan (Figure 5). However, owing to intermittency this needs to be backed up by thermal and nuclear power.

Another issue is that Japan is behind on renewable technology, and has to rely heavily on imports, such as solar panels, with energy security implications. The 2030 NEP calls for increased research to redress the balance. The government is also pushing to promote wind power by making it more competitive.

But one of the most far-reaching reforms could be the unbundling of power generation and transmission. The government will be taking the responsibility for operating the transmission grid away from the incumbent power utilities, beginning in 2020.

These are challenges that need to be overcome before renewables gain traction and become Japan’s main source of power by 2050, as the plan envisages.

Japan’s nationally determined contribution to the global carbon emissions reduction target is 26% below 2013 levels, and with the commitments made in its 2030 NEP it is likely to achieve it. It has also set a longer-term target to reduce emissions by 80% below 2013 levels by 2050.

However, Climate Action Tracker (CAT) is critical that this is not ambitious enough, rating it as ‘highly insufficient’. Even though it is likely to be achieved, it is not consistent with holding global warming to below 2 °C.

Because of the country’s continued heavy reliance on fossil fuels, CAT states that the 2030 fuel mix target is more consistent with global warming in the range 3-4 °C. Based on its current energy mix, Japan accounts for about 4% of global emissions.

This reinforces the view that Japan’s 2030 NEP is driven by energy security considerations and not by climate change principles, even though there is a recognition of the need to increase renewables and reduce carbon emissions.

The plan supports the development of a sustainable market for renewables, solar, wind and geothermal power, and encourages the use of hydrogen.

Not surprisingly, following the Fukushima accident, energy efficiency – measured as final energy consumption amount/real GDP – gained centre stage in Japan’s efforts to minimise the impact and control the level of energy imports. It is driven by efforts to use limited resources more efficiently and reduce carbon emissions.

Japan achieved spectacular results in the period 1970-90, but slowed down during the following 20 years (Figure 6).

There has been criticism that the plan missed the opportunity to grapple decisively with nuclear power and coal and place more reliance on renewables for power generation. The nuclear issue, reduction in coal consumption, a stronger push for renewables and self-sufficiency are issues that continue to persist, attracting attention, and may yet be re-addressed in the next plan.