This article is featured in NGW Magazine Volume 2, Issue 12

Challenges with air pollution have brought natural gas to the fore in China. Between now and 2030 China expects its gas demand to more than double.

China’s gas plans for the remainder of the decade, its growing gas needs and its energy market were all discussed at the Flame gas conference in Amsterdam and the below are the main messages during the conference. The speakers were Jing Wang, the director of oil and gas at the National Energy Administration (NEA) and Yao Li, CEO of SIA Energy.

During the past five years China has achieved steady growth in its conventional gas production, while also building momentum in the development of unconventional gas, especially shale gas. For the period to 2020, and as embodied in its 13th five-year plan, China has set itself some quite ambitious targets to achieve (table 1). 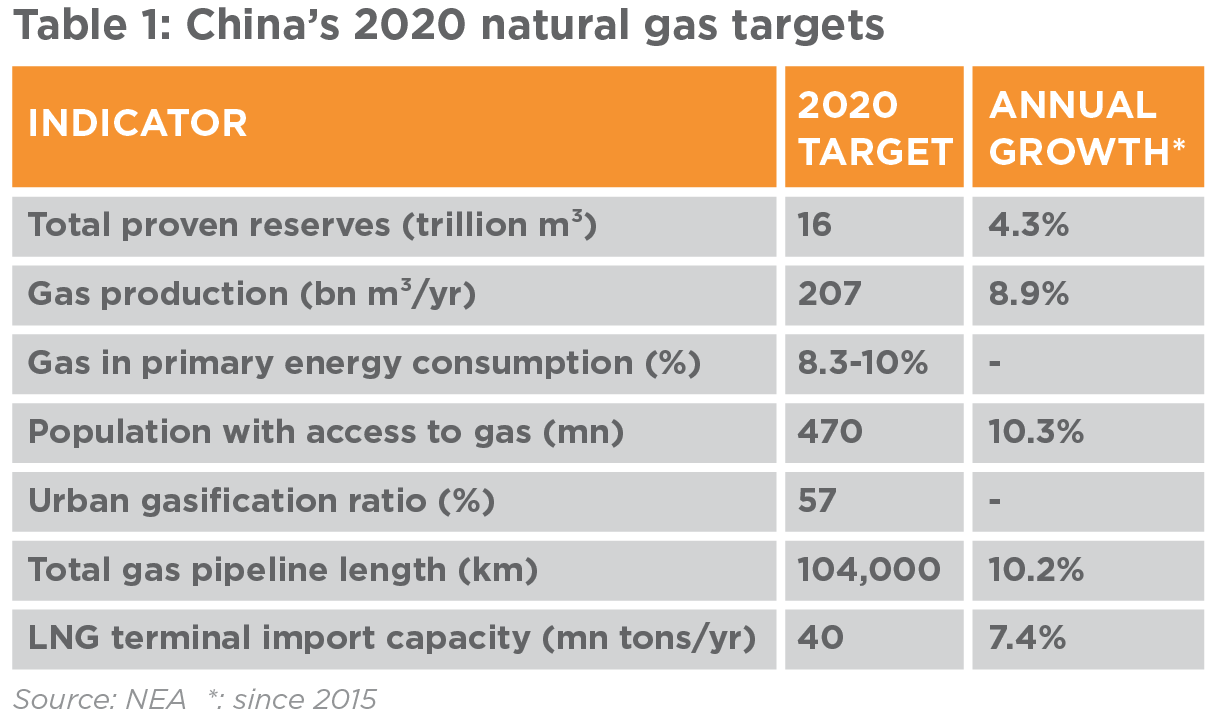 In order to meet these targets China has given priority to enhancing gas exploration and production, aiming to achieve 207bn m³/yr by 2020, which will be two thirds of its total gas demand by then. In fact the government’s speculative target is that demand may reach 360bn m³/yr by 2020 (figure 4).

China is also stepping up exploration and production of unconventional gas, including tight gas, shale gas and coal bed methane (CBM) (figure 1). The target is to increase shale gas production to 30bn m³/yr and CBM to 10bn m³/yr by 2020.

China also plans to speed up construction and expansion of its natural gas pipeline network by an ambitious 10% annually over the period to 2020, increasing the total pipeline length to 104,000 km, with a total gas transport capacity of more than 400bn m³/yr. This includes building more domestic trunk and regional pipelines to improve interconnectivity between its four main gas supply pipeline corridors: northeast, southeast, southwest and oceanic (figure 2). 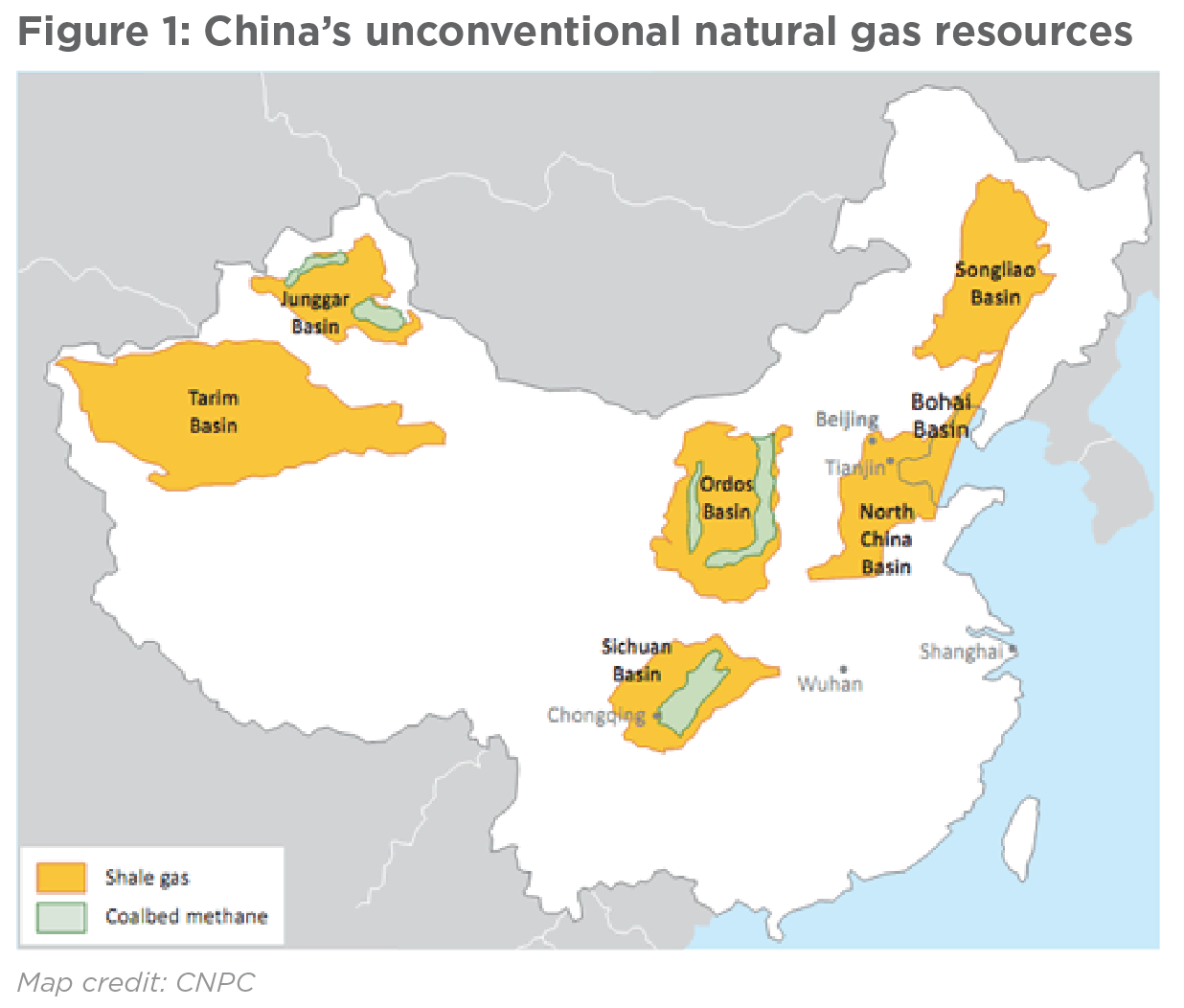 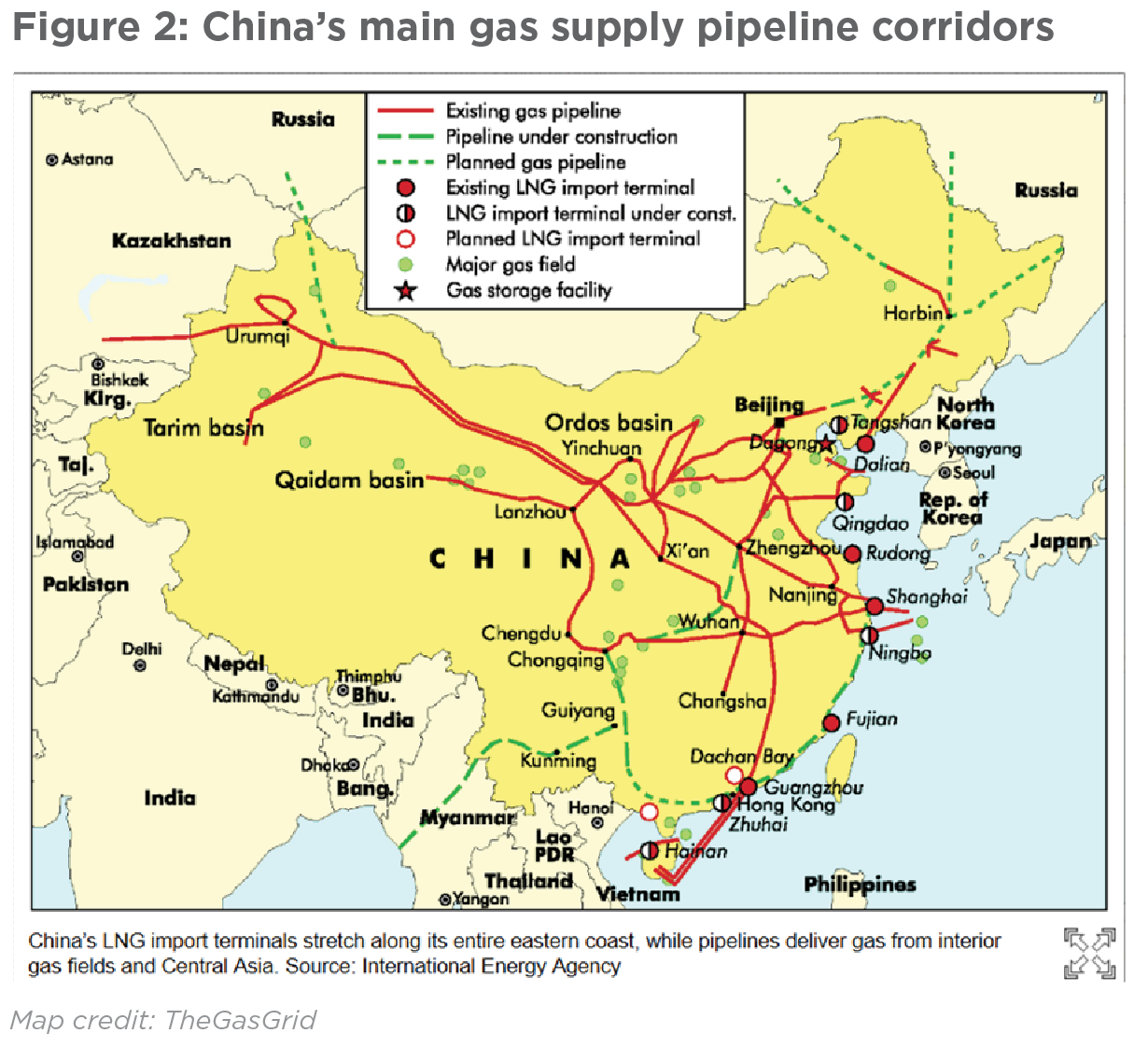 Over the same period China plans to expand its underground gas storage facilities to accommodate up to 14.8bn m³. This will be supported by improvements in urban emergency gas storage and more LNG import terminals. The private sector is being encouraged to participate in these developments.

Last, but even more important, is the plan to develop and expand China’s internal gas market and promote the efficient use of gas. This is essential to support its transition to clean fuels so that it can meet its ambitious emissions-reduction targets.China intends to promote large scale and efficient use of gas in power generation, transportation, industry and for residential use. The longer-term plan is that gas will gradually become one of the main sources of energy as China modernizes its energy system. The goal is to increase the share of natural gas in primary energy consumption to 10% by 2020 and to 15% by 2030.

In order to achieve these goals China intends to impose tighter environmental regulations and promote market-based reforms. This will be supported by:

• improvements in industry policies and standards

• provision of fiscal incentives for investment and financing

• promotion of scientific and technological innovations, and

Some of these reforms are intended to break up the three layers of supply monopolies (figure 3):

• monopoly in wholesale and transport 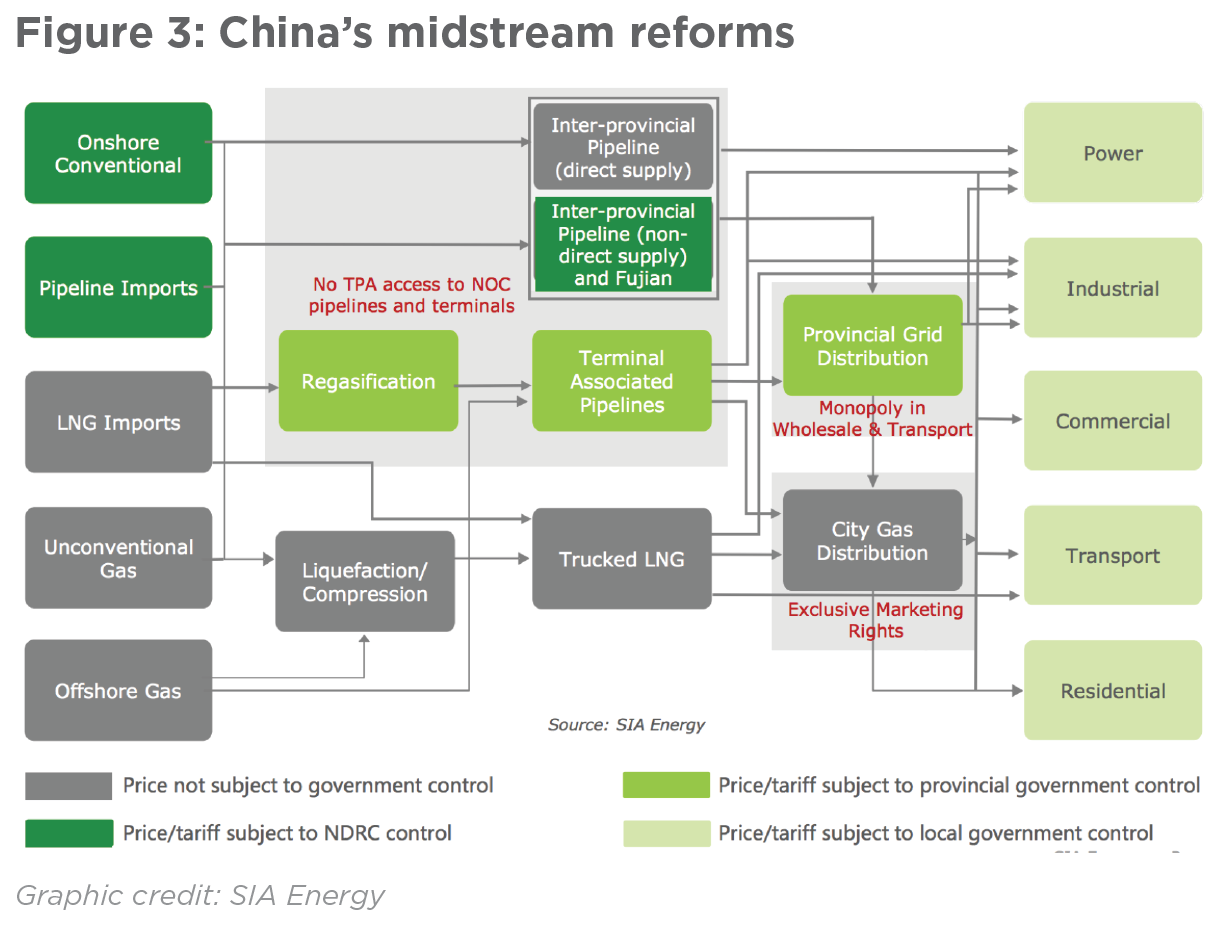 The process to reform China’s gas pricing started in 2011. By 2015 seasonal pricing emerged and the fertiliser feed gas price was deregulated. The plan in 2017 is to remove all regulated non-residential city gate prices throughout the country. In addition, the government is backing strongly the establishment of Shanghai Oil & Gas Exchange, but this still has some way to go.

China expects that between now and 2030 its total gas demand will more than double to 500bn m³/yr. In fact the government’s 2030 ‘speculative demand target’ is 600bn m³/yr (figure 4). But historical experience shows that the government tends to overestimate its targets, hence the use of SIA Energy forecasts. 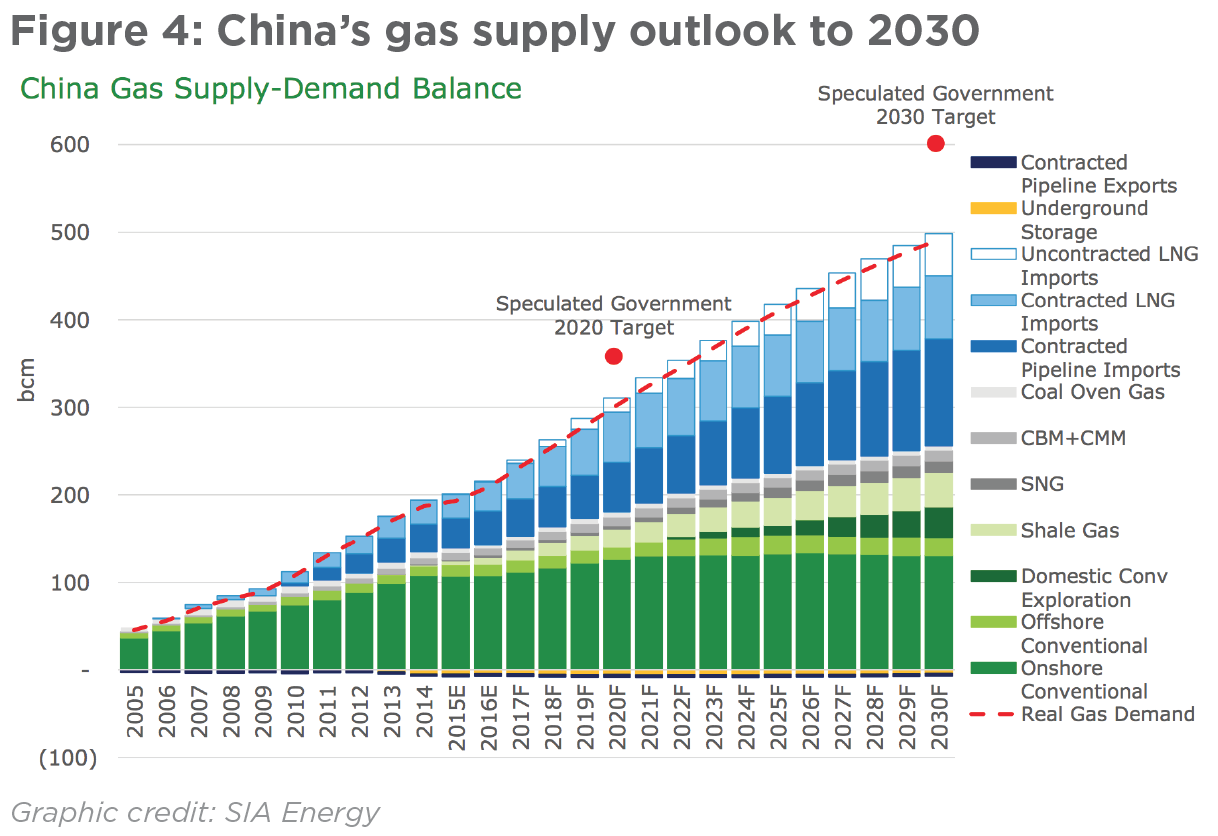 Over this period onshore and offshore conventional production is expected to increase slowly to about 180bn m³/yr. An additional 70bn m³/yr will be provided by unconventional gas, mainly shale gas and CBM. The remainder, close to 250bn m³/yr, will come through imports, split equally between pipeline gas and LNG. China expects that spot LNG imports may total 50bn m³/yr by 2030.

This implies a dramatic increase in gas imports in comparison with just over 70bn m³ in 2016.

According to BP’s 2017 Energy Outlook, global natural gas usage will surpass that of coal by 2035 and China will outstrip the EU and Russia to become the largest consumer of gas after only the US.

China’s import pipeline network carrying gas from Turkmenistan and central Asia will be expanded by 2020. A pipeline between Russia and China, the Power of Siberia, is expected to begin operating in 2019, starting with 38bn m³/yr, with further expansions being considered. Gazprom is also planning to build a western pipeline, which would allow it to divert gas from Siberia south to China if that direction proved more profitable than Europe. This is a longer term plan though and might not be realized – so far, China and Russia have not announced an agreement on the gas price for the Power of Siberia line.

China will also step up imports of LNG. This year alone its imports from Russian-based Yamal LNG will start. At the end of 2016 it had 15 LNG terminals with a total import capacity of about 50mn metric tons/yr. LNG imports are expected to increase to 100bn m³/yr by 2030. 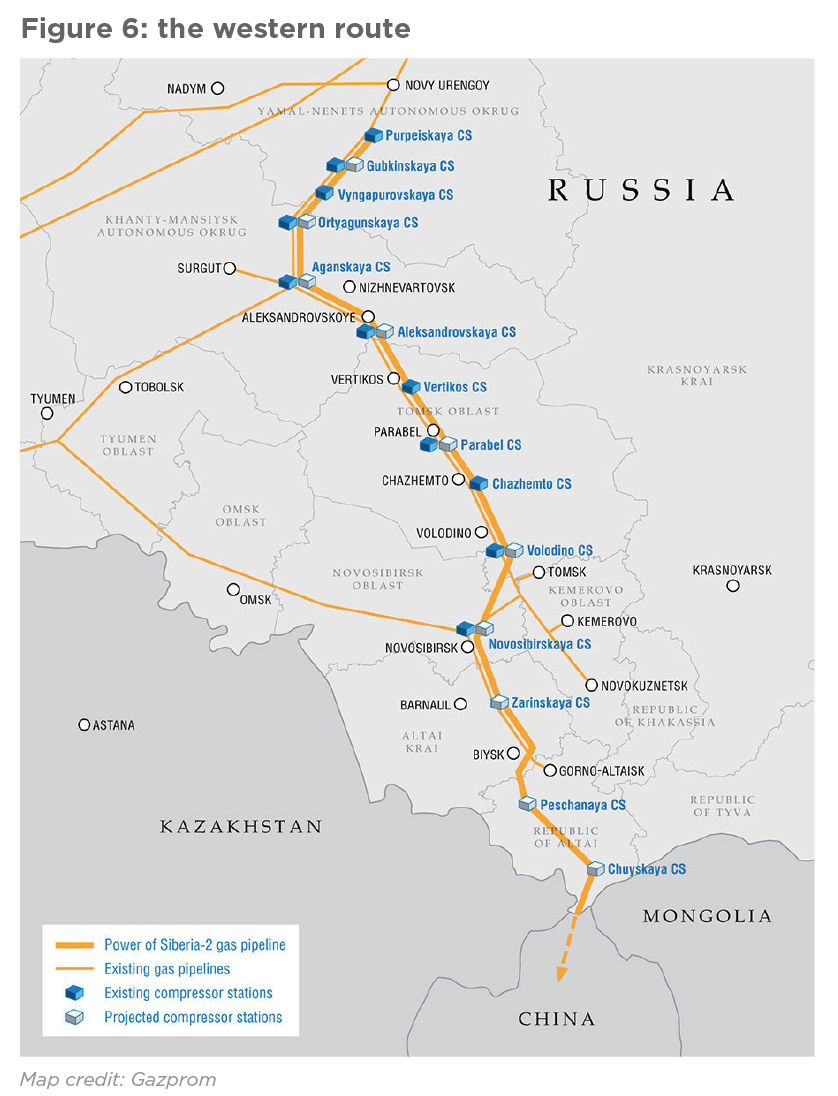 In 2016 China’s biggest LNG supplier was Australia, with 46% of the total, followed by Qatar. But this is about to change. Following a trade deal announced last month by the US president, Donald Trump, US LNG could soon be arriving in China under long-term contracts.

In addition to the three NOCs, CNPC, CNOOC and Sinopec, the government is opening the sector to private companies. A number of them are already in operation giving the sector a new dimension and playing an increasingly critical role in LNG imports.

This is also bolstering the shale gas sector. The IEA forecasts that although reliance on natural gas imports has increased in the Chinese energy market, future shale gas production would help it meet a substantial part of its natural gas demand.

China’s technically recoverable shale gas resources are estimated to be 32 trillion m³. Sinopec and CNPC have been increasing shale gas exploration activities with promising results. China is supporting this and sees unconventional gas development as an important contributor to reducing its increasing dependence on natural gas imports, as it shifts to cleaner energy to meet its commitments under the Paris climate agreement.