Demonstrating the importance of political will married to foreign technology, the giant Zohr field will restore Egypt’s fortunes – and possibly spur some other regional developments. 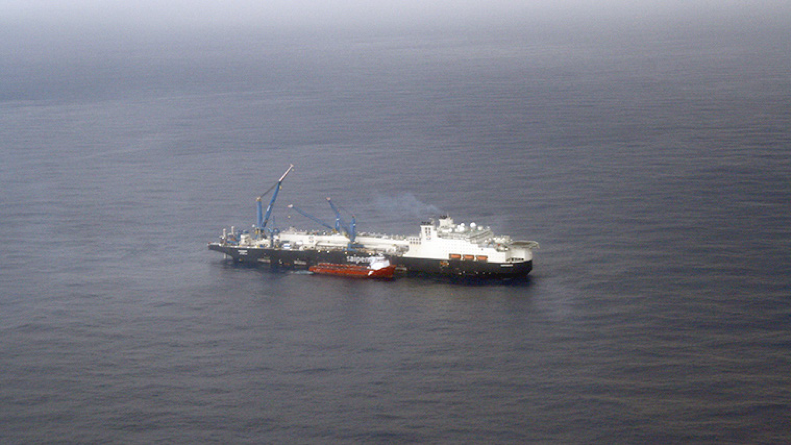 It is not an exaggeration to call the development of Egypt’s Zohr gas-field one of the quickest major gas projects ever to get to market. It was discovered by Eni in August 2015 and, following a fast-track development, it went into production in December 2017, two years and four months after discovery.

Eni achieved this by working in parallel on further exploration and appraisal, following discovery, while also working on the engineering and procurement to develop the field, focusing on cost reduction. It was also quick to sell down stakes to BP and Rosneft, spreading the cost and risk.

Eni’s CEO Claudio Descalzi summed it up when he said: “Our philosophy is time to market. We changed all the industry strategy by breaking the contractual schemes and starting to move from investment authorisation to production with parallel steps.” This may now be the way industry will be going forward in response to the post-2014 world of low prices. Cutting costs and accelerating the time to market is becoming more necessary.

Welcoming this development, Egypt’s petroleum minister, Tareq El Molla, said that as Zohr ramps-up production, “Egypt will stop importing liquefied natural gas in 2018 and may eventually export gas.” He went on to say that Zohr’s gas will mostly supply Egypt’s domestic market and that by 2019 any surplus can be exported from its two existing liquefaction facilities at Idku and Damietta.

Egypt was exporting LNG until 2014 but by 2015 it had to stop all exports to meet increasing domestic demand as gas production declined. Eventually the country ended up importing LNG to cover the deficit.

This was caused by political instability and past short-sighted policies that led to fixing the price of gas paid by state companies to the gas producers to the uneconomical level of $2.65/mn Btu. This discouraged further investment and stopped the exploration and development of new fields, especially offshore. This in turn forced Egypt to import LNG.

This was remedied only after El Sisi’s government introduced a flexible gas-pricing formula, by increasing gas prices in July 2015 in the range $3.75-$5.88/mn Btu, which encouraged investment and boosted supply. 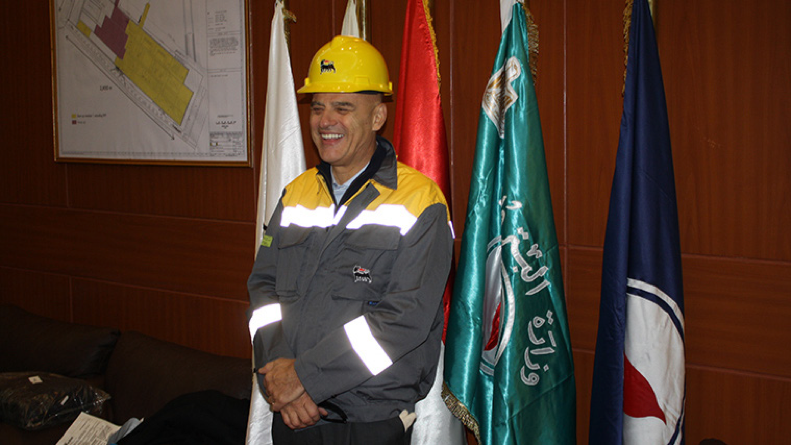 In addition, it placed emphasis on resuming and expediting new projects, by signing and ratifying concession agreements that had been put on hold for years. More than 74 new or amended agreements were signed during the last three years. This spurred new E&P activity, leading to new major gas discoveries including those of West Nile Delta, Atoll, Nooros and Zohr, with more on the way.

Buoyed by this success the country is now embarking on new licensing rounds with every sign that new discoveries will be adding to Egypt’s gas production.

Zohr was discovered by Eni in August 2015 in the Shorouk block, about 180 km north Port Said (Figure 1), in 1500 m of water, and it is estimated to have a total of 850bn m3 of gas in place, making it the largest natural gas field ever discovered in the Mediterranean. 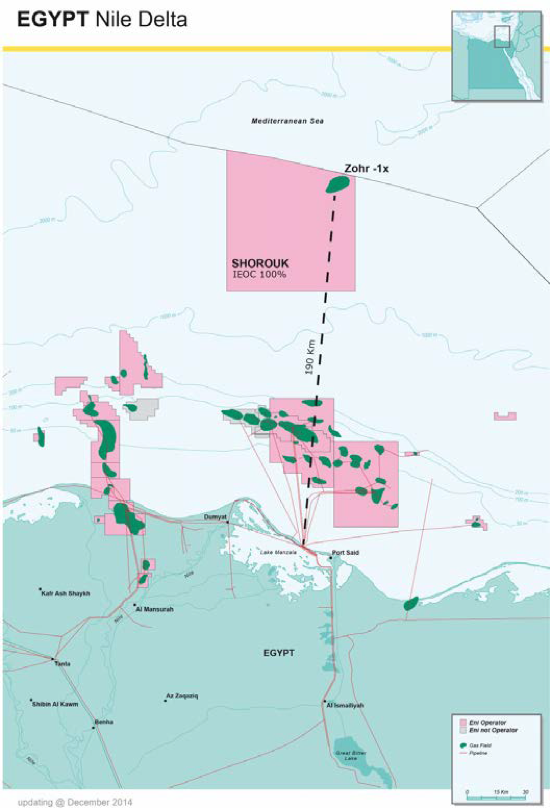 The reservoir is in a carbonate formation and lies at a total depth of 4,130 metres, covering an area of about 100 km² with a 630-m thick hydrocarbon-bearing column.  As Eni geologists put it: “To have an idea of just how big it is, you have to think of a large massif in the Dolomites, such as the Sella-Pordoi [Figure 2], but buried under 3,000 m of sediment and 1,500 m of water.”

Figure 2: The Zohr deposit is as large as the Sella massif in the Italian Dolomites 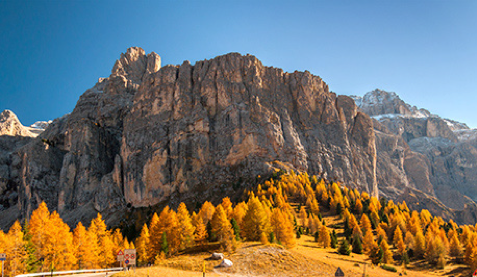 The Zohr discovery has been a game-changer for the region, creating massive international interest in Egypt and the eastern Mediterranean. El Molla said: “It shows there’s an international appetite…We want to have our plate full of big and important players.”

Cyprus also benefited from this, licensing three blocks (Figure 5), during its successful third licensing round. So, more recently, did Greece, with interest shown for blocks west and south-west of Crete. Interpretation of seismic data using the ‘Zohr-model’ has identified a number of potential targets in carbonate formations, both in Cyprus and in Greece, which attracted the interest of majors such as Total, ExxonMobil and, predictably, Eni.

The project is being developed on a fast-track programme. The first phase involved six wells, subsea development, a 26” subsea pipeline, 180 km of umbilicals, use of an offshore control platform and a new onshore processing plant (Figures 3 and 5), costing close to $4bn. 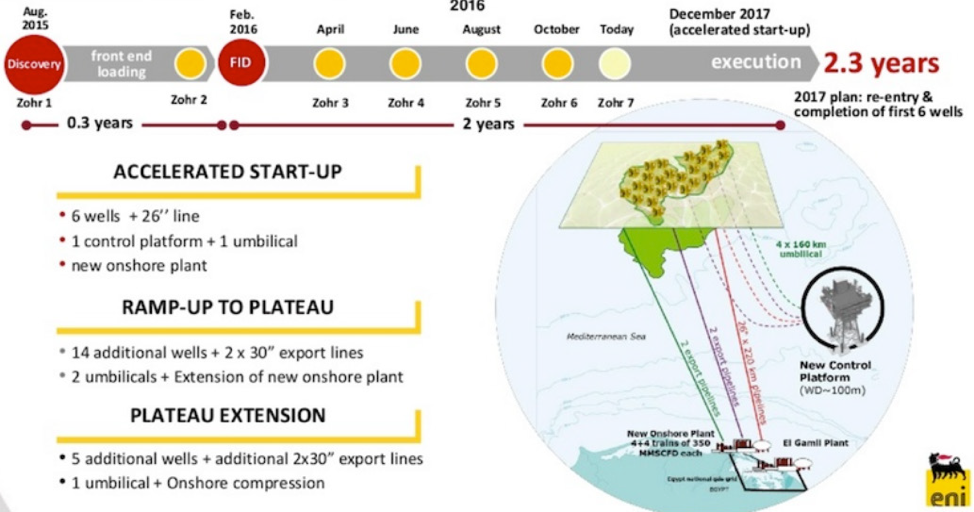 The project’s second phase, or the accelerated ramp-up to plateau, will add another 14 wells to boost production to 2.7bn ft3/day from 2019. It will also include another gas pipeline as well as a new offshore control platform and an onshore processing plant.

The full field development plan will entail 254 wells over the field’s production life, with the overall investment in the Zohr project estimated at somewhere between $12bn and $16bn.

With the completion of the first phase of the Zohr production, the money expected to be saved by Egypt from ceasing LNG imports could reach about $2bn/yr.

Speaking at the start of production, and echoing Eni, El Molla said that development of Zohr shows “all multinationals that we can do extremely well when we talk about giant discoveries… big projects to be developed and brought on stream in a relatively very short period of time.”

Descalzi said: “This project…will completely transform Egypt’s energy landscape, allowing it to become self-sufficient and to turn from an importer of natural gas into a future exporter.”

In fact, the ministry expects gas production to reach 6.2bn ft³/day by the end of 2018, thus achieving self-sufficiency. By FY 2020/2021 production is expected to be double that in 2015. On this basis the state Egyptian Natural Gas Holding Company (Egas) and the oil ministry expect gas exports to start by 2019-2020.

These estimates are in agreement with recent projections, based on current and future expectations, made by the Paris-based Observatoire Mediterraneen de l’ Energie (OME, Figure 4). These are based on data from oil companies operating in Egypt, which are members of OME. Superimposed on the graph are gas supply and consumption estimates announced by the ministry.

The ‘proactive scenario (PS)’ allows for renewables penetration and impact of demand management measures, like energy efficiency and conservation, now being implemented in Egypt. The ‘conservative scenario’ does not: it assumes that gas demand carries on increasing unabatedly. 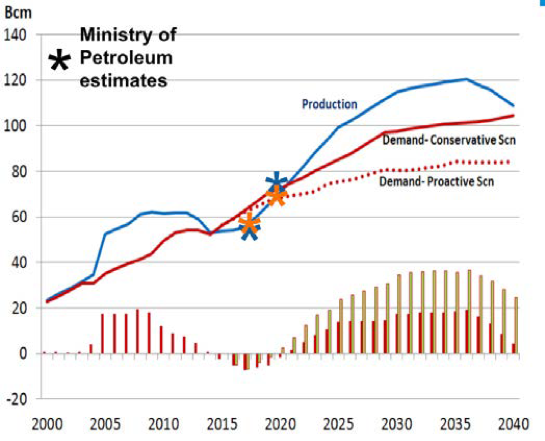 Either way, provided discoveries continue as expected, surplus gas for export could lie between 20bn m³/yr and 35bn m3/yr by 2030, and possibly more. This will more than fully utilise the existing liquefaction capacity of the Idku and Damietta LNG plants. Their combined capacity is 17.5bn m3/yr.

From LNG imports to exports

With the Zohr gas-field becoming operational in December 2017, increased gas production is already helping reduce LNG imports by over 30%.

Egas aims to import about 80 shipments of LNG this fiscal year in order to meet domestic energy needs. This should be compared with 118 shipments imported during the last fiscal year. But while this is good news for the country, it could be bad news for Israel and Cyprus, which also nurture hopes of exporting gas to Egypt.

Eni has already received dispensation in Egypt to supply gas to Italy, once domestic demand has been satisfied. Russian state Rosneft, which bought into Zohr, has also confirmed its interest in selling Zohr gas.

The Damietta LNG plant, close to Port Said (Figure 5), came on stream in late 2004 and has 5.5mn metric tons/yr capacity. It is owned by Egas and Segas, a 50%:50% partnership between Union Fenosa as operator and Eni. The majority of the LNG went to Spain on 25-year tolling contracts, but exports stopped in 2013 as there was no supply of gas.

The LNG was being exported on long-term contracts to Italy, France and the US. It ceased full-scale exports in 2015 for the same reason as Damietta, but restarted exporting limited amounts of LNG in September 2016. The plan is to increase LNG exports in 2018 and 2019, with the terminal expected to approach maximum output by 2020 as Zohr and other gas-fields come on-line. 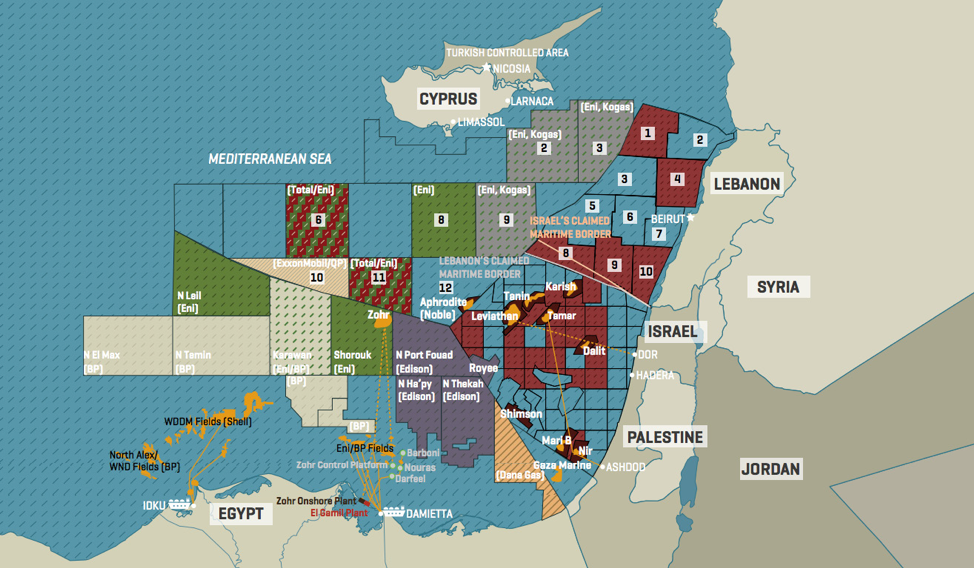 El Molla said that by 2019 surplus gas would help Egypt expand its petrochemicals industry and resume LNG exports to fulfill its contractual obligations under these interrupted contracts. He added: “The nation’s two existing gas liquefaction facilities are large enough to process any available surplus into LNG for international sale in 2019.” Under the existing contracts, the destination of most of these exports will be Europe.

He is also on record stating that if surplus gas supplies keep on going up, Egypt may consider adding a third LNG-exporting terminal. OME’s projections provide support to this. However, the minister recognises the challenges posed by a low-price energy environment.

Demonstrating his confidence that Egypt will achieve self-sufficiency by the end of 2018, and is well on the way to have more gas than it needs for domestic consumption, El Molla said in December that the country would allow international oil companies (IOCs) operating there to export their surplus natural gas in five years. Going further, he stated that this provision is now added to upstream contracts.

These contract changes not only demonstrate confidence that gas production will grow in the future, but are also part of Egypt’s larger strategy to become a regional energy hub.

In support of this, a new 2.5 km wharf is about to be inaugurated in the Gulf of Suez, owned by the Egyptian government and by Gulf Arab oil exporters and dedicated to petroleum and LNG tankers.

These developments will make 2018 an even better year for Egypt’s energy sector. Increasing investments, attracted by the discovery of Zohr, the gas law reforms and high gas prices, should lead to increased exploration and production activities and more discoveries. El Molla said: “The Zohr reservoir is enormous. It is a very important discovery, and we may discover additional reservoirs on this scale.”

Eni also believes that there could be many more natural gas deposits to be discovered in the eastern Mediterranean, with similar geological features as Zohr.

Egas is already in the process of issuing global tenders in 2018 for new Red Sea, and later for western Mediterranean, concessions.

The greatest challenge in 2018 will be to implement fully the new gas law and deregulation by completing the liberalisation of Egypt’s gas industry, with the potential to create a freer, more flexible and more efficient gas market.

Under a law approved in August 2017, private businesses will be allowed to transport and trade gas using Egypt’s pipeline network and infrastructure, moving away from state monopoly. This should support Egypt’s hub aspirations and help attract more investment in a sector that is so crucial to Egypt’s economy. It would also allow private companies to import gas and LNG, even after 2018, provided of course it makes commercial sense and they can find buyers in Egypt’s domestic market.

The picture is also looking good from the point of view of the IOCs. Zohr and other recent discoveries offshore Egypt increase the likelihood that more gas can still be found – only a fraction of the country’s offshore EEZ has been explored so far. The flexible gas-pricing formula adopted by Egypt, as well as the extensive infrastructure already in place, are also encouraging further interest and investment.

BP and Eni are investing more money in Egypt than in any other country. BP CEO Bob Dudley confirmed: "We have a lot of confidence in Egypt.” This is despite the problems in the past over late payments for gas delivered by companies such as BG and BP.

Gas exports would bring much needed foreign currency to the country, which can help ease pressure on the economy. But above all, from El Sisi's perspective, gas self-sufficiency should also ensure that electricity cuts remain a problem of the past, thus eliminating one of the potential causes of social unrest.