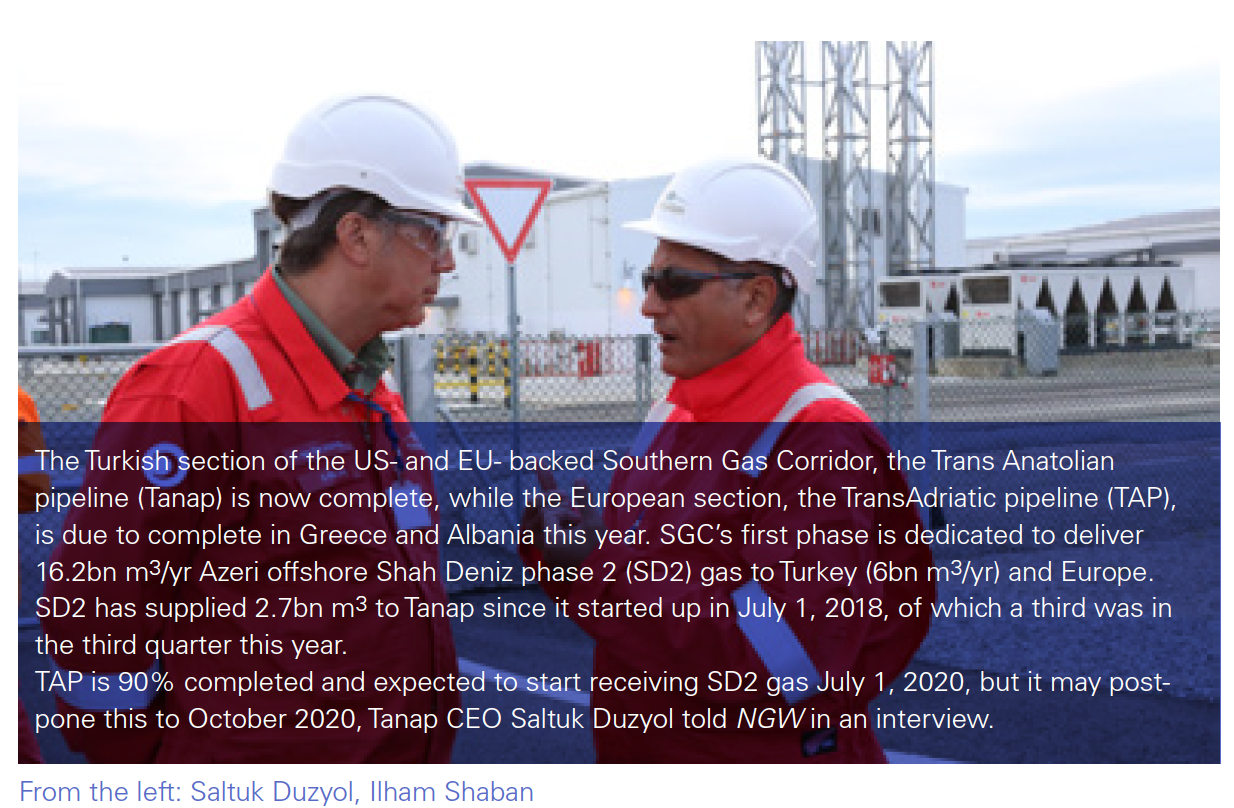 NGW: The TAP operating company told NGW in September that it is satisfied with the results of non-binding market tests for a planned doubling of the pipe's capacity to 20bn m³/yr in its second phase. The company did not disclose the names of companies or countries that would potentially provide the extra gas. But an Azeri official confirmed to NGW that Azeri gas would help utilise the added capacity. In mid-October we also found out that BP, Turkish Botas and Azeri state-run Socar –all Tanap shareholders – have been evaluating capturing flared gas in Iraqi Kurdistan for injecting into the SGC expansion phase after 2024.  How do you see the expansion phase of SGC?

Duzyol: Tanap has two entry points and one exit point. The entry points are in Erzurum and Eskisehir in east and central Turkey respectively and the exit point is Ipsala, at Turkish-Greece border. Indeed we have three sources of gas that could be alternatives to Azeri gas for the Tanap expansion phase (31bn m3/yr), if needed. The first one is northern Iraq, which needs a 417-km pipeline construction to bring the gas to Erzurum.

The second alternative is eastern Mediterranean offshore gas, which could be brought to Eskisehir from three directions, whose lengths range from 770 km to 988 km.

The third alternative is Turkmen gas, if Trans-Caspian pipeline project may be realized. 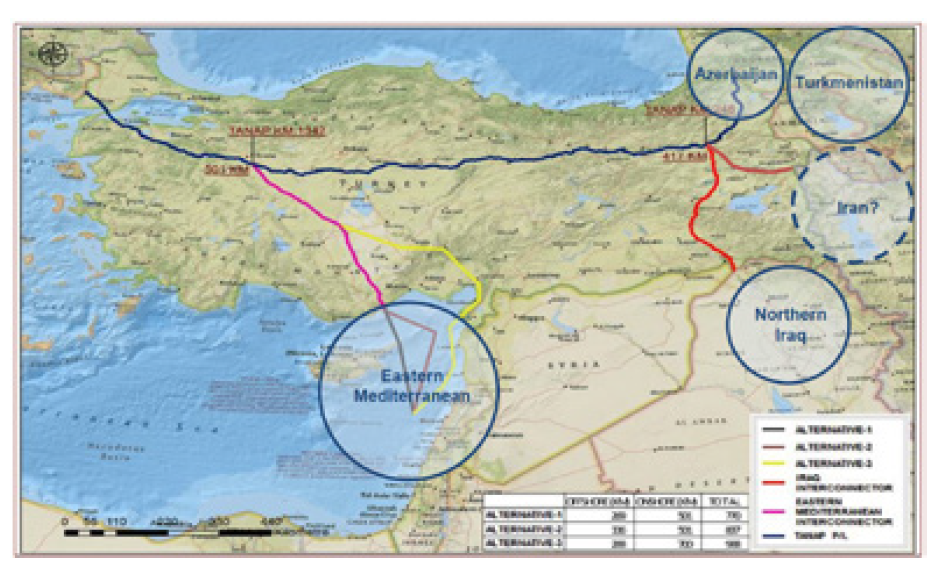 Duzyol: Russian gas can reach Turkey directly through two pipelines: Blue Stream and TurkStream. Neither of them are connected to Erzurum or Eskisehir. TurkStream can connect to the SGC at the Turkey-Greece border, but this is not related to Tanap. On the other hand, TAP has been financed and supported by European entities for its energy diversification plans, decreasing the dependence on Russian gas. Coming to Iran, there are doubts around the feasibility of sending gas to Europe through the SGC owing to sanctions, and we can’t recognise that as serious source.

As I mentioned, we are now eyeing Iraqi, eastern Mediterranean and Turkmen gas, if Azeri gas can’t on its own justify the Tanap expansion.

NGW: TAP phase 1’s cost €4.6bn, while €2.426bn of additional investment is needed to double its capacity in the second phase to 20bn m3/yr. What about Tanap?

Duzyol: Let me say that the cost of Tanap fell from the initial estimate of $11bn in 2013 to $6.5bn, owing to declining material and service costs. Tanap has absorbed $2.65bn loans from international financial entities, including the International Bank for Reconstruction and Development,  the European Bank for Reconstruction and Development (EBRD), Multilateral Investment Guarantee Agency (MIGA) and  Asian Infrastructure Investment Bank (AIIB). We need five more compressor stations to realise Tanap phase 2 and this needs, at maximum, $3bn.

NGW: Please explain the deliveries as of now. 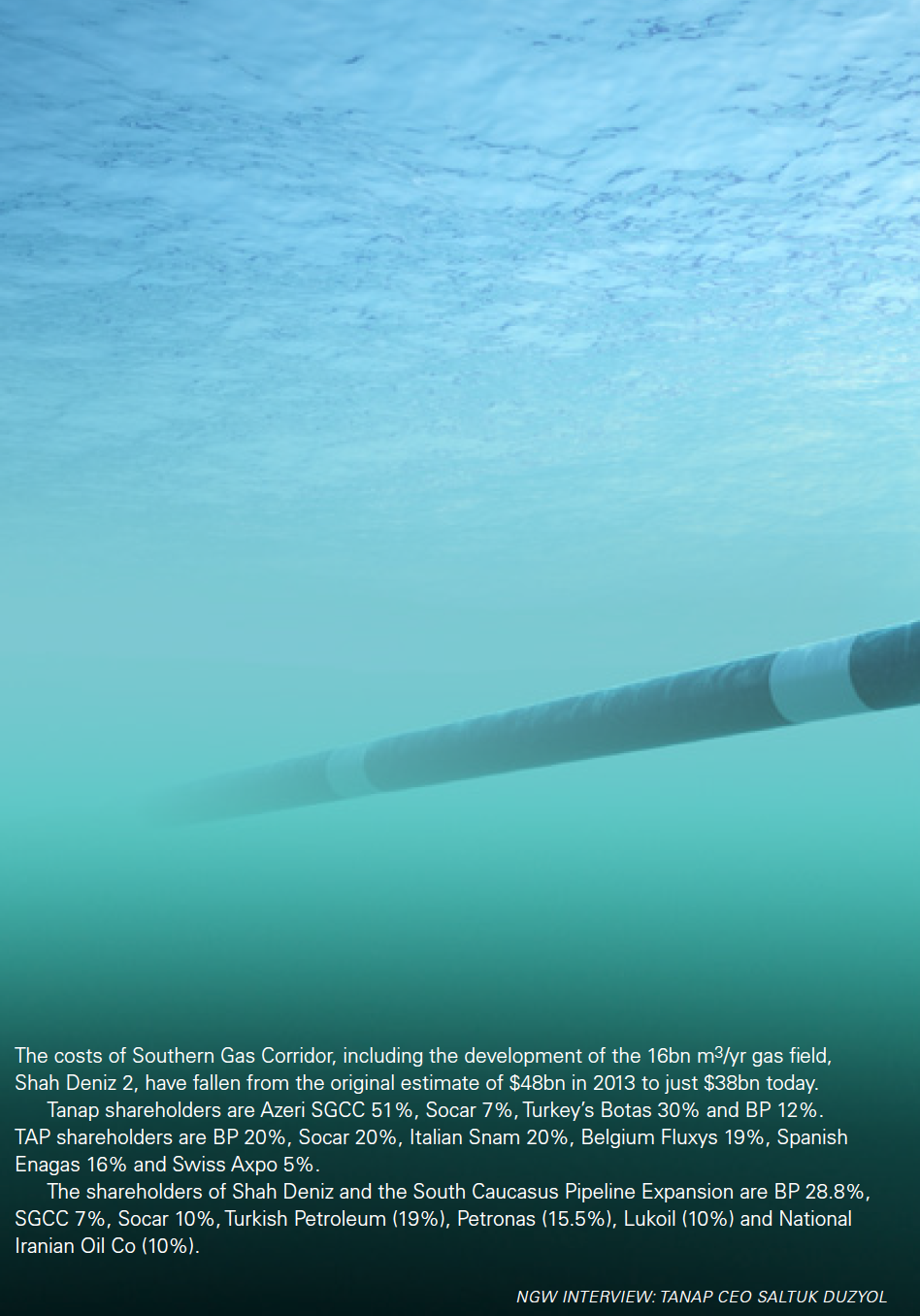 Regarding the halving of capital expendutures to $6.5bn, Tanap shareholders expect $1.45bn/yr gross revenues after 2022, when its first phase become full operational with 16.2bn m3/yr transit capacity. Tanap would pay $5.95/”000 m3 ($96.39mn/yr) tax to Turkish government and would have some operational expenditures, but we expect Tanap will earn back its costs in six or seven years. The transit revenues are fixed and not dependent on gas price.

NGW: When do you expect delivering SD2 gas to Europe?

Can Azerbaijan step up as a supplier for southeast Europe? [Gas in Transition]