Devising the correct regulatory and fiscal regime will be essential if investors are to put money into carbon capture and storage (CCS) projects, Nick Cooper, the CEO of developer Storegga Geotechnologies, told NGW in a recent interview. 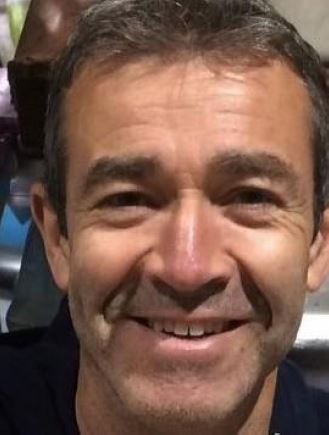 And he said the UK government Department for Business Energy and Industrial Strategy (Beis) was progressing work on a regulatory framework to underpin the value chain and he was hopeful it would achieve it by the end of the year.

He also commented approvingly of the German government’s recent approval of a €55/metric ton (mt) carbon tax, which would help speed up the transition from coal and lignite in the power sector. That compares with a carbon price in the emissions trading scheme that has struggled to go about €30/mt.

As a geoscientist who has made a career from exploring for gas, Cooper is now planning to do the opposite: returning carbon dioxide underground and storing it geologically. The geology has to be right, but also the process is capital-intensive in the early phases. The first few years such projects can run at a loss until they reach threshold capacities.

But except for the reversal of the process, he says, it is very similar to an LNG or gas project value chain.

Risk-sharing is essential. That means that the customers in the early stages will likely be locked in with the promise of limited costs relative to a national carbon tax, the emissions trading scheme price of carbon, or some other passive approach. The UK government is now considering some form of contract for differences (CFD) to  economically incentivise the emitters who are early adopters, otherwise, he says, they will continue to avoid it, unless they are determinedly altruistic.

Certainty on both sides is also important, as it is with a gas development; banks will only lend when buyers are lined up. This might even mean long-term deliver-or-pay contracts with customers for carbon dioxide. The transport regime also needs to be ironed out. 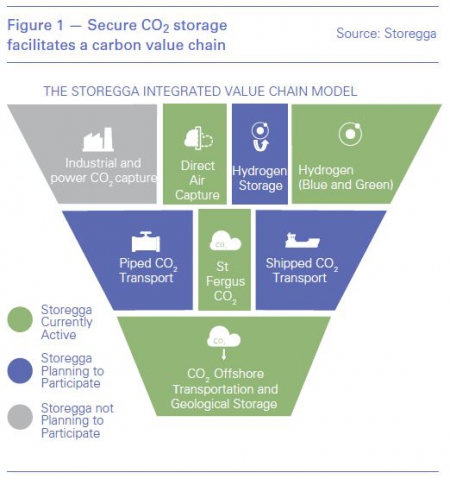 However, when it comes to onshore gas pipelines there is good news for organisations looking to generate hydrogen for blending with the methane that currently fills these pipes.  A blend of up to 20% hydrogen with methane is known to be possible – in the UK town gas comprised up to 35% hydrogen before the UK’s transition to North Sea gas in the 1970’s. And the EU already require that by 2025 boilers for households will have to be 100% hydrogen-ready.

The former CEO of Ophir Energy – operator of assets in Asia and Africa, including the ultimately ill-fated LNG project off Equatorial Guinea – left before it was bought by Indonesia’s Medco, but he has no regrets about leaving the world of upstream oil and gas.

He said CCS matched his skills – “I am a rock nerd,” not referring to the popular music genre. Independent companies such as Storegga can play an important role in progressing CCS and hydrogen, derisking projects to attract bigger companies to support development on a large scale.

And the growth is CCS infrastructure to meet net zero targets is expected to be dramatic. According to the IEA’s estimates, 2-3,000 Acorns will be needed globally to meet net zero carbon commitments. “These projects need to be commercially viable and benefit from developers with a singular focus on derisking the full value chain,” he said.

Storegga in the summer partnered up with Pale Blue Dot – “a superb project originator” which has done “a fabulous job” of progressing CCS and hydrogen and has “become, modestly, an authority on the storage potential of the UK continental shelf,” but which needed a stronger balance sheet. Storegga is partly owned by infrastructure investor Macquarie as well as its own management which includes Alan Booth, also formerly of Ophir.

Pale Blue Dot’s flagship Acorn Project revolves around collecting CO2 captured from industry in the UK and Europe, from direct air capture (DAC) of CO2 as well as CO2 from the manufacture of hydrogen from gas deliveries at St Fergus, where 35% of the UK gas is landed, and then exporting the CO2 offshore to be injected into gas fields.  Acorn has the potential to quickly scale from initially modest CO2 volumes stored in 2024, to over 20mn mt/yr within a decade of operations. Globally just 40mn mt/yr are stored today, so Acorn will become a crucial CCS project for the UK and Europe.

All new technologies need a helping hand in the early years with the contractual allocation of risk and reward, until the market is mature enough to manage it safely and fairly. CCS is in the same position as offshore windfarms were, but the total amounts of CFD support are not expected to be as expensive or the subsidies so long-term, he said.

However, the fiscal and regularity regime needs to be in place before companies as savvy as Acorn’s industrial partners – the European majors Shell and Total and independent Chrysaor – would make any significant investment, he said.

Some initial matched funding, unspecified, has already come from European Union, UK and Scottish government grants. The latest fund is the Connecting Europe Facility for which Acorn is eligible as a European Project of Common Interest.

As a mature province with a lot of depleted gas fields, the UK has more brownfield CCS opportunities than Norway. As well as the Goldeneye and other fields off St Fergus, there are also depleted fields off Teesside and Humber and, in the other side of the country, in Liverpool Bay. All these CCS projects are looking for government clarity and funding support.

The UK could use those too: he said the Captain Sandstone, which contains the Goldeneye gas field, also offers saline aquifer potential. But the advantage of depleted fields is the amount of data they produce; and how a reservoir drains helps understand how best to fill it. On the debit side, well integrity is a risk factor.

There is also all the related infrastructure in place: an onshore pipeline network, a terminal, and three offshore pipes – Goldeneye, Atlantic and Miller – all make Acorn potentially cheaper to develop at scale than its rivals, including those in the UK. “It is predominantly a brownfield development in the early phases,” he said.

Norway by contrast is almost all greenfield: the terminal and the offshore part all have to be built from scratch, which means the project must bear higher up-front costs. Northern Lights has recently quoted unit costs of €150/mt for the early days of operations, reducing to €80/mt as CO2 volumes increase. Storegga believes that in comparison, Acorn’s unit costs could be less than half these levels, both in early operations and as volumes increase.

The Norwegian government is taking a lead and has made a firm commitment to fund a big chunk of the upstream (the source of the emissions) and the midstream, while in the UK, the government is finalising its plans and has made available £800mn for CCS. How this will be allocated to the CCS candidate projects remains to be seen.

Cooper is hoping that Acorn will take final investment decision in early 2022 with the first CO2 molecules being stored in 2024.

The Role of CCUS in Decarbonising the Cement Industry: podcast

Opportunity knocks: Maintenance market for renewables and low-carbon set to approach $250bn by 2030