The first quarter of 2013 was a time of fundamental ownership changes among the key gas companies in Central Europe. Those companies which underwent a change in ownership include the Czech and Slovak transmission system operators as well as some of the key gas shipping, distribution, and storage companies in Hungary and Slovakia. Each of these transactions fits in with the trend for Western European – predominantly German – energy companies to withdraw from Central European gas markets.

What is characteristic is that they are being replaced with companies from outside the gas sector.. International financial investors, who are interested in gas transit because of stable albeit relatively low profits, are gaining significance on the Czech market. The Slovak gas sector is becoming a bridgehead enabling further development to the Czech Energeticky a prumyslovy holding (EPH), which is pinning its hopes on the effect of synergy between the gas sector and its combined heat and power business. In turn, Hungary has seen a rapid growth in the significance of the state-controlled electricity corporation Magyar Villamos Muvek (MVM), which is tasked with improving energy security and cutting gas prices for consumers.

The fact that key gas assets are being taken over by companies from the power sector and investment funds is causing uncertainty as to the direction the further development of the gas sector in this region is likely to take. The new owners, in particular in the Czech Republic and Slovakia, so far have failed to present a clearly defined strategy of the development of the companies they have taken over. Therefore, delays in building some of the gas interconnectors in the region cannot be ruled out. One should also expect a stronger integration of the gas and electric energy sectors in some countries.

The wave of ownership changes on the gas markets

The sale of 100% of the shares in Slovak Gas Holding B.V by Germany’s E.ON and France’s Gaz de France to the Czech Energeticky a prumyslovy holding in January this year marked the beginning of major changes on the Central European gas market. Thus EPH has become the strongest player on the Slovak gas market. This is due to the fact that Slovak Gas Holding holds a 49% stake and has management control in all the key gas companies in Slovakia: Eustream (transmission system operator), Nafta and Pozgas (the operators of Slovak gas storage facilities) and SPP (the most important gas shipper and distributor) – see Appendix. EPH, which until recently was focused on the production and sale of heat and electricity and also on coal mining in Poland and Germany, is owned by Czech-Slovak investment groups, PPF and J&T, and also by a Czech businessman, Daniel Kretinsky. EPH paid 2.6 billion euros for Slovak Gas Holding; this being the largest Czech foreign investment to date.

Another major transaction was effected in the Czech Republic. At the end of March this year, Germany’s RWE signed a contract of sale of the Czech transmission system operator, Net4Gas, to a consortium of Germany’s Allianz and Canada’s Borealis Infrastructure. This transaction is to be finalised in the second half of 2013. The consortium formed by Allianz and Borealis won the tender against two Czech energy companies, EPH and KKCG, offering a price of 1.2 billion euros (along with the obligation to repay Net4Gas’s debt of 400 million euros). EPH and KKCG in this tender were acting as members of consortiums formed with international investment funds. It proves that Czech gas networks have attracted great interest among financial investors. This fits in with the European trend, where financial investors are becoming engaged in gas and power transmission assets (these assets generate low but reliable profits). At the same time, the takeover of Net4Gas by Allianz-Borealis will make it difficult for EPH to make put into practice its vision of building a strong Central European corporation which would hold a dominant position in the gas sector.

The last of the major transactions took place in Hungary. In late March, Germany’s E.ON signed an agreement with the state-owned company MVM on the sale of its two companies: E.ON Foldgaz Trade (the main importer of Russian gas to Hungary as part of the contract in force until 2015) and E.ON Foldgaz Storage (which controls most gas storage facilities in Hungary). This transaction is to be finalised in the second half of 2013, and will be worth approximately 870 million euros. Budapest has announced that the takeover of E.ON Foldgaz Trade will enable a more favourable contract for Russian gas supplies to be signed. This transaction proves that MVM is becoming the main player who will set the trends in Hungary’s gas policy. Since Prime Minister Viktor Orban took power, MVM has acquired shares in a company which is planning to build the Hungarian section of the South Stream gas pipeline. It has also taken over the task of building a Hungarian-Slovak gas interconnector from the gas network operator, FGSZ (owned by MOL). Furthermore, MVM has a rapidly developing subsidiary which is involved in the trade of gas and it established the Hungarian gas exchange at the beginning of 2013.

The causes of the exodus of Western investors

The recent ownership structure changes on the gas markets of the Czech Republic, Slovakia and Hungary are primarily an effect of E.ON and RWE withdrawing from the region after having previously played a dominant role on these markets. These two German companies have financial problems. Furthermore, they intend to become strongly engaged in the development of renewable energy sources and adopted divestment programmes in 2011. The sale of their assets is expected to enable them to amass capital of 8–11 billion euros (RWE) and 15 billion euros (E.ON). Despite this, German companies remain present in electricity production and distribution in Central Europe.

The decisions of these companies to sell a significant part of their gas assets have also been influenced by the relatively low rate of return the gas sector offers in Central Europe. Gas transit via the southern branch of the Bratstvo gas pipeline – the main route for export of Russian gas to Western Europe – does not generate very high profits. Over the past few years, due to the falling demand for Russian gas seen in Western Europe and the launch of the Nord Stream pipeline, gas transport via Bratstvo has been in constant decline. Gas distribution and storage is also unable to generate high profits. This is particularly relevant where the government led by Viktor Orban has imposed a number of tax levies on energy companies over the past few years, and has been strongly interfering with gas sale prices. The investment climate is more favourable in the Czech Republic and Slovakia. However, growing competition makes it difficult for companies to achieve high profits on these markets.

The consequences of the ownership changes

The emergence of new players on the gas market who have limited experience in the gas sector adds to the uncertainty as to whether the previous business strategies of the gas companies will continue. This in particular concerns the development of infrastructural connections by gas network operators in the Czech Republic and Slovakia. Allianz and Borealis, as well as EPH, at the time of the takeovers reportedly undertook to continue the long-term infrastructure development programmes previously approved by the gas companies and regulatory authorities. However, some interconnector projects are in the initial preparations stage (for example, the plan for the development of the Czech-Polish interconnector or preparations for the construction of the Polish-Slovak interconnector), and the ownership structure change is likely to lead to a reassessment of the cost-effectiveness of all these projects. Possible changes in transport tariffs could be used as an excuse for delays. This can be concluded, for example, from statements made by managers from Net4Gas, who recently started questioning the sense in building the Moravia gas pipeline (which runs towards the interconnector with Poland). In turn, the growing role of the state in Hungary’s gas sector seems to offer better perspectives for the integration of the Hungarian gas market with those in the countries with which it shares a border. This fits in with Budapest’s vision of Hungary becoming the region’s gas hub.

The recently observed ownership changes will also contribute to the bonds between companies from the energy and gas sectors in individual countries being strengthened. Both the Czech Republic’s EPH and Hungary’s MVM will be actively searching for synergies between the two market sectors, and so a further consolidation of assets around these companies is likely. 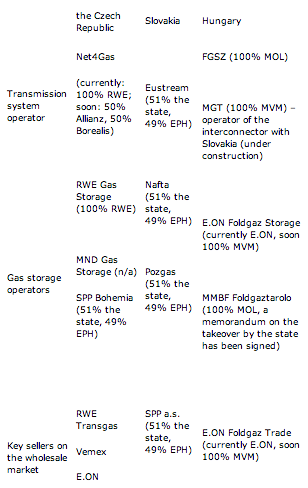 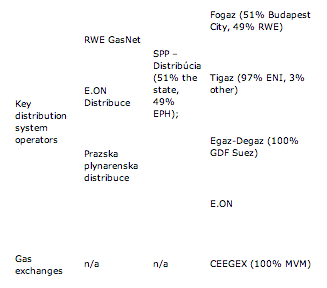