Opponents of blue hydrogen were emboldened in August by the release of a paper by professors at the universities of Cornell and Stanford, which claimed that the global warming potential of blue hydrogen was higher than that of natural gas and even coal. As argued in the previous issue of Gas in Transition, that paper overstated the methane emissions associated with gas supply used to produce blue hydrogen, as well as their impact on the climate. Yet its claims were nevertheless widely carried by the media. 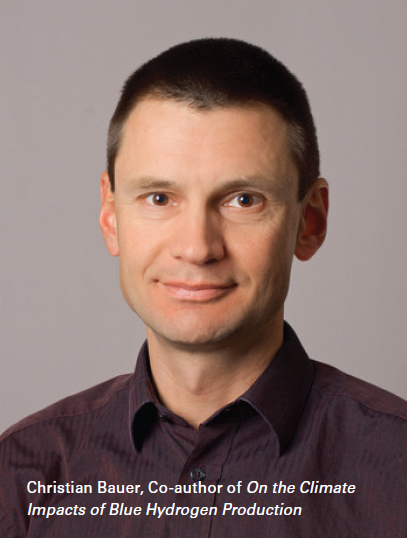 In stark contrast, a new research paper has found that in fact, blue hydrogen can be considered as clean as green hydrogen, in the right conditions.

The paper, entitled On the Climate Impacts of Blue Hydrogen Production, was researched and written by academics in the UK, the US, Canada, Switzerland, Germany, Italy and the Netherlands. Its conclusion is that blue hydrogen can serve as a powerful tool for tackling emissions, but only if the methane emissions intensity of the gas that is used is sufficiently and the CO2 capture rate is sufficiently high. Assessing how clean blue hydrogen is also depends greatly on what metric is used to determine the climate impact of the methane emitted further up the gas supply chain, the paper states.

And while green hydrogen is often described as a net-zero emissions fuel, the paper’s researchers argue that this is not the case, at least when the entire value chain is considered, including those from the manufacture of a renewable energy plant and an electrolyser.

“Our main conclusion is that, if the above requirements are met, blue hydrogen can be close to green hydrogen in terms of impacts on climate change and can thus play an important and complementary role in the transformation towards net-zero economies,” the researchers state. “It is important to reiterate that no single hydrogen production technology, including electrolysis with renewables, is completely net-zero in terms of greenhouse gas (GHG) emissions over its life cycle and will therefore need additional GHG removal from the atmosphere to comply with strict net-zero targets.”

One of the authors of On the Climate Impacts of Blue Hydrogen Production, Christian Bauer at the Paul Scherrer Institute in Switzerland, tells NGW he welcomes the previous Cornell-Stanford paper for shining a light on an important topic. He also says he recognises the risk of “greenwashing” from the gas industry, where companies try to portray the blue hydrogen they produce as cleaner than it actually is.

“On the other hand, the authors [of the Cornell-Stanford paper] present a kind of biased study, in the sense that they perform the analysis using parameters that are not really representative of best practices and therefore doesn’t do justice to the potential of blue hydrogen,” he says.

Many governments view green hydrogen as superior to blue as a tool for tackling climate change. The EU’s hydrogen strategy, for example, is heavily skewed towards green hydrogen development, while the bloc views blue hydrogen as only a shorter-term solution that can help establish a hydrogen market that is ready for when green hydrogen has been scaled up.

There are some notable exceptions, including natural gas suppliers such as Russia, Norway and the UK, which look on blue hydrogen more favourably. But there is a common perception held by environmentalists and some in government that a product derived from a fossil fuel cannot play any role in the energy transition. The latest paper questions that logic.

The paper acknowledges the difficulty in quantifying methane emissions from the natural as supply chain. But it states that provided that there is a methane emissions rate of only 1%, for global warming potential (GWP) over 100 years, or 0.3% for GWP over 20 years, and if CO2 capture rates of above 90% are achieved, blue hydrogen can have a lifecycle greenhouse (GHG) footprint of no more than 2-4 kg of CO2 equivalent/kg. That makes its climate impact comparable to that of green hydrogen.

Currently, carbon capture equipment installed at hydrogen plants only prevent 50-60% of the CO2 from being emitted, according to the paper. But this is mainly because they capture only CO2 from the syngas in steam methane reforming and not the CO2 in the combustion products. But many of new hydrogen-CCS plants in Europe and the US have expected removal rates of more than 90%. The technologies to achieve such high rates have already been shown to work at demonstration plants, the paper states.

What is more, rates of “close to 100% of technically feasible, slightly decreasing energy efficiencies and increasing costs, but have yet to be demonstrated at scale,” it says.

Meanwhile, emissions rates as low as 0.3-0.4% have been achieved for US shale gas, and several other countries including Norway, the UK and the Netherlands, have rates of below 0.5%, according to the paper.

The paper’s authors called for policymakers to consider the lifecycle emissions when determining the benefits of different hydrogen types.

“Only in this way can the whole system implications of such measures be fully understood,” they say. “This means emission monitoring verification and reporting is required for emissions across the life cycle.”

These measurements should be better disclosed to the public, and emissions pricing, public funding tied to GHG performance, and regulation are needed to motivate industry to produce as clean hydrogen as possible, and differentiate between different gas suppliers based on their emissions.

“As European gas extraction has strongly declined over the last decades, with no trend reversal in sight, importing gas from countries with good monitoring practices and low methane emission rates should be prioritised from a European perspective,” the paper states. “From a US perspective, and for other countries with primarily domestic supplies, best practices regarding minimising methane emissions from the entire natural gas sector must be ensured.”

The paper’s conclusion on blue hydrogen’s merits is clear.

“Blue hydrogen can play a role as a bridging technology supporting the uptake of hydrogen infrastructure and end-use transformation,” the study states. “Blue hydrogen projects can be developed under the recommendations presented here without crowding out the global ramp-up of green hydrogen supply.”

“As both blue and green hydrogen have innovation potential,” it continues, “policies and regulations should support both options independently until they are fairly mature and can compete (e.g. based on carbon pricing accounting for full life cycle GHG) – provided the above conditions for blue hydrogen are met and the necessary prioritisation of demand areas is reflected.”

The case for CCUS [Gas in Transition]