After years of passionate discussions, the European Commission finally announced the EU hydrogen strategy on July 8. This aims at expanding hydrogen use in energy applications and related development of dedicated networks. The Strategy has been welcomed by industry and investors, who believe hydrogen is of key importance to reduce greenhouse gases (GHG). Hydrogen is seen as a necessary complement to variable renewable energy, as it provides storage and can be used to replace natural gas or oil (in transport) in cases where electrification is less suitable.

But policy declarations and industrial self-promotion need to be cross-checked against realities. Issues of cost, competitiveness, stakeholder engagement and regulation still form formidable obstacles to the success of a European hydrogen strategy. The present commentary will briefly highlight some of the major unresolved challenges in the demand, supply and transport of hydrogen.

During the last decade, hydrogen demand has steadily increased from 55 to 70 million tons. It has been mostly concentrated in refining, the chemical industry (e.g. ammonia production) and agriculture (fertilizers). This means that hydrogen demand transcends energy needs, and its extensive use for energy purposes risks leaving the other sectors with a supply shortfall. Hence, implementation of the hydrogen strategy will need to address non-energy industrial stakeholders who may – either implicitly or explicitly - oppose this option of energy transition.

In addition, the EU focuses on green hydrogen produced from water electrolysis. This is expected to fully replace natural gas in industrial use and in residential sectors by mid-century. This will lead to considerable additional costs. Recent data from investment bank HSBC estimates costs of green hydrogen at $15-$38/mn Btu, whereas the wholesale natural gas price on European hubs has been below the $5-7 price range and natural gas production costs rarely exceed $1-3/mn Bbtu.

Even though many expect costs of green hydrogen to decline significantly, probably to $5/mn Btu by 2050, natural gas prices would remain lower throughout this period of time. In the context of the global economy, where major powers are switching to natural gas, the shift to green hydrogen in Europe will hurt European competitiveness. Many of the economic advantages the liberalisation of the EU gas market has brought will be undermined.

This difference in fuel costs will be first tested in the transport sector, where hydrogen cars and buses will have to compete with other carbon-neutral solutions, such as electric vehicles as well as biomethane-driven transport.

These demand-side challenges illustrate that successful implementation of the EU’s hydrogen strategy requires case-to-case studies on possible areas for market penetration and roadmaps for financial and policy incentives for industrial and other stakeholders.

Currently global hydrogen production amounts to 2% of natural gas market volumes, which means that hydrogen production needs drastic scaling up. One way to do so would be by producing “blue” hydrogen from natural gas. This is cheaper than hydrogen from water electrolysis favoured by the new EU strategy. For instance, cost of traditional steam methane reforming ranges from €1 to €1.20 per kg of H2, whereas more modern ways to extract hydrogen, such as methane decomposition, range between €1.60 and €2.20 per kg while costs of green hydrogen are between €2.50 and €5 per kg.

Green hydrogen produced from renewable energy sources avoids carbon and capture storage, but requires a higher share of renewable power generation across Europe. According to European Commission projections from 2018, a hydrogen scenario requires an increase of EU electricity demand in final energy consumption from the current 21% to 43% by 2050. In absolute terms, it means an increase of annual power generation by some 1,200 TWh, which should be ensured by carbon-neutral energy sources. 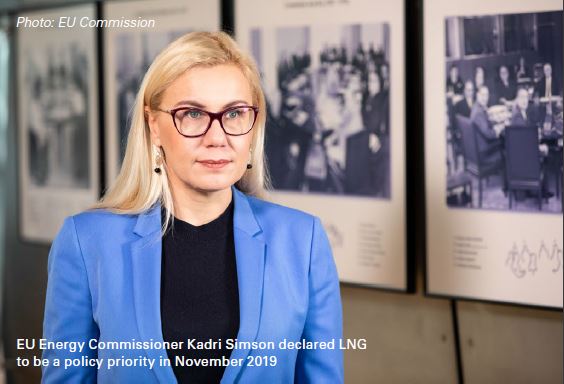 What is more, intermittence in power generation can be challenging in ensuring the stability of water electrolysis. In this respect, large hydropower and nuclear power might be among the most suitable sources of energies for green hydrogen since both can provide baseload stable electricity supply.

However, nuclear energy is still not classified as a sustainable energy, and is hindered by poor social acceptance. According to the same HSBC report mentioned above, offshore wind would be the most suitable renewable source for hydrogen thanks to a higher load factor than solar and onshore wind.

Then again, offshore wind installations in Europe are mostly concentrated in the North Sea area and remain scarce beyond this region. Further, in the aftermath of the UK departure from the bloc, the EU’s offshore wind capacity dropped by some 42%. In this respect, the new hydrogen strategy implies another round of electricity sector reforms with capital-intensive investment programmes.

The hydrogen strategy indicates that new infrastructure for hydrogen transportation will need to be built, such as hydrogen-dedicated pipelines. At the same time, industry experts expect technical difficulties of such infrastructure because hydrogen is prone to leakages which are more extensive and harder to detect than in natural gas. In the Eastern part of the EU, heat supply is dominated by district heating which has been difficult to renovate, suffering from frequent leakages. The introduction of hydrogen might worsen the situation and increases the need for public spending on municipal infrastructure.

Indeed, the option of “hydrogen blending” is deemed to be the most commercially viable one during the transition to the green hydrogen economy. Under this scenario, methane is mixed with up to 20% of hydrogen. The problem is that hydrogen in gaseous form provides over three times less energy (calories) than methane (10.8MJ/m3 for H2 vs 35.8MJ/m3 for CH4). In market terms, adding 20% of hydrogen into the gas network will lead to a loss of approximately 16% of calorific value per similar supplied volume, and at a higher price, considering the hydrogen production costs described above.

Thus, industries will need to be incentivized to implement hydrogen blending. Moreover, no EU-wide standards and norms relating to the technical compatibility of hydrogen with existing natural gas infrastructures exist yet. With insufficient economic incentives, and without full clarity of unified standards, industrial stakeholders might prefer to keep existing structures of conventional gas supplies intact.

Recent developments in natural gas markets marked an ever-growing interest in liquefied natural gas (LNG), which was also declared to be a policy priority by the EU Commissioner for Energy Kadri Simson in her speech addressing the European Parliament in November 2019.

The fast development of LNG markets has contributed to increased use of LNG substituting carbon-intensive fuels both in maritime transport and industry feedstock. In addition to lower carbon intensity, LNG avoids sulphur emissions and provides noise-free maritime transport. Even so, experience has shown that the availability of cheaper alternative heavy fuels constitutes a major barrier to a switch to LNG across Europe. Now, the hydrogen strategy might become an additional competitor for LNG.

Liquefaction of hydrogen itself is a challenging option because of its very low liquefaction temperature (-253 °C). For the same reason, LNG blending remains impossible because of differences in liquefaction temperatures with methane (-161 °C). In this respect, liquefied biomethane is the only long-term low-carbon alternative for LNG, but this is commercially unproven technology.  It would make sense to adopt a comprehensive strategy for all new gases – such as hydrogen and biomethane – to get viable alternatives on the market. In the light of fast-growing interest in LNG, biomethane should get bigger attention in parallel to hydrogen.

This brief analysis attempts to demonstrate that the EU hydrogen strategy is being adopted in a climate of economic, legal, and regulatory uncertainty. So far, the ambitious targets transcend economic and infrastructural realities. Implementing the hydrogen strategy will lead to new regulatory costs for the EU, its Member States and European industries.

A way to address this is through a bottom-up approach which would include national Roadmaps and an implementation phase that includes incentives for consumers and producers to ensure the competitiveness of hydrogen. Hydrogen competitiveness is not solely about good ideas and fascinating pilot projects, but also about stakeholder engagement, identification of barriers and incentives to promote the new market.

(Andrei Belyi is a distinguished energy policy expert, owner of energy consultancy Balesene in Estonia and adjunct assistant Professor at the University of Finland.)