Mexico is hopeful that the summer resolution of a dispute over transportation contracts withpipeline operators will boost business confidence, but this may not be enough to spur new investment. Indeed, investors may still hesitate to target Mexico owing to uncertainty over how future contracts will be treated.

The end to the stand-off comes as the country’s president Andres Manuel Lopez Obrador – known by many as Amlo – faces growing pressure to allow private sector players a greater role in the country’s energy industry.

The president announced August 27 that a deal had been reached to end the dispute between state-owned power utility CFE and three gas pipeline operators over contract terms and tariffs. The deal involved Canada’s TC Energy, Mexico’s Grupo Carso and Sempra Energy’s Mexican unit IEnova. Separately, the CFE announced September 11 that it had reached an agreement with the final company involved in the dispute, Mexican infrastructure firm Fermaca.

The contracts in question had been agreed between the CFE and the companies before Lopez Obrador took office in December 2018. They involved seven gas pipeline projects. However, Amlo’s government claimed the contracts were unfair, and in early July the CFE announced it had filed requests for arbitration in French and UK courts in a bid to annul certain clauses.

Nonetheless, talks with the companies involved on a potential renegotiation of the contracts continued and were ultimately successful. At the news conference where he announced the breakthrough, Lopez Obrador described the renegotiated contracts as being beneficial for all sides.

IEnova said August 27 the agreement with the CFE in relation to the Guaymas – El Oro pipeline, and the Sur de Texas – Tuxpan marine pipeline – the latter jointly developed with TC Energy – arose from “both parties’ commitment to adequately utilise existing infrastructure that is essential for the industry and millions of Mexicans. Reaching these agreements would not have been possible without the direct and personal intervention of the president of Mexico.”

IEnova said the new tariff structure and a possible 10-year extension for both contracts met “both parties’ interests and allow a benefit for the CFE, while maintaining the overall integrity of the original contracts. Additionally, CFE has committed to provide support to resume operations in the Guaymas – El Oro pipeline, including the respectful dialogue with the Yaqui community, as well as the commitment for the immediate start of commercial operations of the Sur de Texas – Tuxpan marine pipeline.” And on September 27, US exports rose, using this line.

The terms of the new agreements were not disclosed, but according to Lopez Obrador and the CFE’s CEO, Manuel Bartlett, the service fees paid by the utility will be reduced and set at a fixed rate. Previously, they had been set to rise each year.

The most significant tariff rate reduction to be announced was for the Sur de Texas-Tuxpan pipeline, at 33-38%. The rate reduction for some of the other contracts was between 19% and 32%, according to a director at CFE subsidiary CFEnergia, Miguel Reyes.

Lopez Obrador said the new deals would ultimately result in savings of $4.5bn for the Mexican government, which equates to more than 30% of what it would have had to pay under the original contracts. However, this figure has been called into question, with the Wall Street Journal citing sources familiar with the deal saying the nominal savings for the government would only amount to about $600mn.

The Texas-Tuxpan pipeline, built by a joint venture between TC Energy and IEnova, runs through the Gulf of Mexico from South Texas to the port of Tuxpan. The $2.5bn project was completed in June but kept on ice until the agreement.

The pipeline has the capacity to transport 2.6bn ft³/day and its entry into service increases Mexico’s natural gas import capacity by 40%. In turn, this benefits the country’s power plants and manufacturing industry, which have been struggling amid shortages of natural gas and electricity – and high prices for both. Indeed, blackouts over the summer in popular tourist areas in the Yucatan Peninsula and Baja California added to the pressure on Lopez Obrador to resolve the pipeline contract dispute. Now, the president has said the new contracts will allow Mexico to maintain its policy of not raising electricity prices.

The Sur de Texas-Tuxpan pipeline will supply gas to five power plants in Tuxpan with a capacity to generate 4.1 GW of electricity. The pipeline will also feed two other power plants that are being built and will add another 1.2 GW.

The other pipelines involved in the contract dispute are being held up by local opposition from indigenous groups, so the end of the stand-off will not have the same immediate impact on their timelines for start-up. However, the agreement could pave the way for even more US gas to flow to Mexico – if investors are not put off by uncertainty relating to the handling of future contracts. 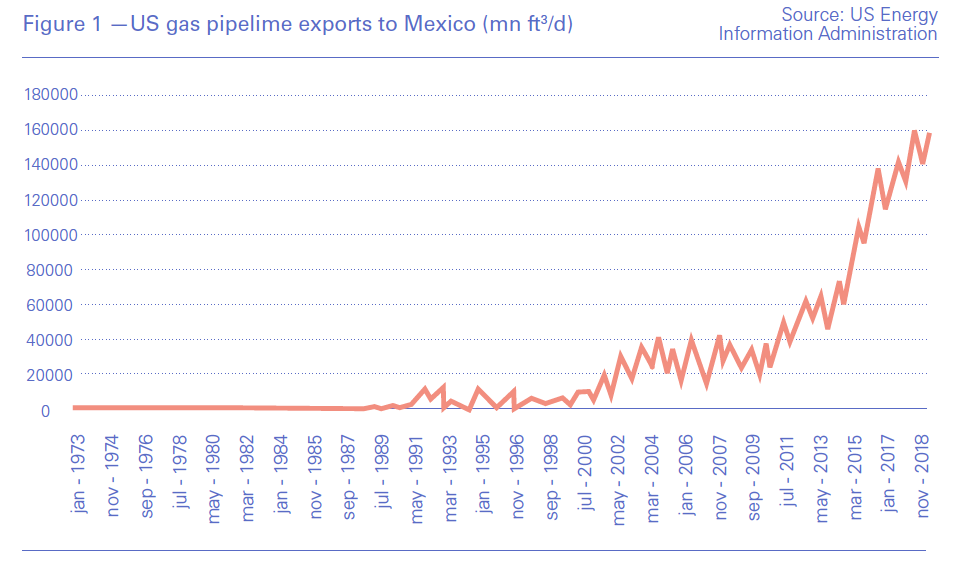 In a September 17 note on the US natural gas industry, Moody’s Investors Service analysts wrote that they expected pipeline gas exports to Mexico to keep rising alongside US LNG export capacity. They also noted the steady increase in the use of natural gas in power generation, which is anticipated to continue.

Mexico uses about 8bn ft³/day of gas, but only produces around 3bn ft³/day and relies on imports for the rest. Texas, just across the border and sitting on large shale resources, is an obvious candidate for meeting this shortfall. Mexican demand also provides a welcome outlet for drillers in the Permian Basin that are struggling with a glut of associated gas production as they focus on producing oil.

However, while the Eagle Ford shale in South Texas enjoys more takeaway capacity, the Permian is also struggling with gas pipeline bottlenecks that will take time to ease. Takeaway capacity out of the basin will be boosted by Kinder Morgan’s Gulf Coast Express project, which is set to start up later in September, carrying 2bn ft³/day to the Agua Dulce hub near Corpus Christi. From there, the gas can be shipped on to Mexico, or can be sent to one of the new liquefaction plants on the US Gulf Coast. But pipeline operators may be wary of building additional pipeline capacity connecting Texas and Mexico in the current environment.

Lopez Obrador, who once caused jitters upstream with his hostile views on shale gas production in Mexico, has shown a preference for growing domestic production over embracing more gas imports from the US. Allowing the Sur de Texas-Tuxpan pipeline to enter service in the wake of recent power shortages could mark a shift away from this, however. Indeed, the move is being touted as evidence of a newly emerging pragmatism where the energy industry is concerned, which favours low-cost imports. This implies a stable regulatory system though where investors can be sure of a good return.

The president of Mexico’s CCE business group, Carlos Salazar has praised the renegotiated pipeline deal for giving certainty to investors – although given the context, the value of this certainty is double-edged. But critics of the development contend that it sets a worrying precedent for Mexico’s government to demand the renegotiation of any contract it deems to be unfair.

Lopez Obrador’s administration appears to be divided on the issue of foreign and private sector participation in the country’s energy industry. However, Mexico’s weak economy may force the government to accept further private sector involvement. The president has promised to lift economic growth to 4%/year during his presidency. Instead, the country’s economy shrank 0.2% in the first half of 2019 compared with the previous six months. This has been attributed in part to weak investment from the private sector, given uncertainty over the administration’s approach to energy. For pipeline operators seeking to send more gas to Mexico from Texas, the start-up of Sur de Texas-Tuxpan will be a step in the right direction, but more encouragement may be needed.

US cities and the gas ban [NGW Magazine]