Measuring the benefit of coal-to-LNG switching [Gas in Transition]

The LNG industry looks set for steady expansion over the next decade, in particular to supply gas to growing Asian economies chronically dependent on coal-fired generation. Whether this is positive for the environment depends on whether the LNG-to-power supply chain results in lower greenhouse gas (GHG) emissions than burning locally-mined or imported coal.

As the EU’s Methane Strategy recognises, the starting point its measurement. There is a big data gap when it comes to understanding the extent of methane emissions from the LNG-to-power supply chain, and even more so with regard to the life-cycle methane emissions of coal use, even if the benefits are clear when it comes to the point of combustion. Combined cycle gas turbines typically produce about half the CO2 emissions of a coal-fired coal plant.

The Methane Strategy is important because it offers an opportunity to move from the use of estimated standard emissions factors to empirical measurement. In addition, the EU’s proposed Carbon Border Adjustment Mechanism (CBAM) puts the onus on producers in the sectors covered (iron and steel, fertilisers, cement, aluminium and electricity) to measure the carbon content of their products or risk having standard values ascribed to them.

As European countries increasingly take into account full life-cycle emissions of the gas burnt within their borders – an approach likely to be adopted in other LNG markets with net zero targets – the ability to provide accurate methane emissions measurements will become more important, potentially resulting in premium pricing for the best performing LNG sources and the minimisation of carbon costs, either from trading schemes or taxes.

LNG-to-power does not, of course, stack up against renewables in environmental terms because it is a fossil fuel, but renewables will struggle to expand fast enough to sufficient scale in emerging economies, where they need to meet both new power demand and replace coal-fired generation. This is particularly true as the energy transition itself means increased electrification, not just in transport but across industrial applications and in heating, which will raise demand for power.

Because of its local availability and historically competitive cost, many emerging economies remain dependent on coal-fired generation. China and India, the two most populous countries in the world, are the most significant. Both are trying hard to expand renewable energy generation, which grew by 15.6% and 7.9% last year respectively, but they have a mountain to climb (see Figure 1).

In 2020, China generated 4,917.7 TWh of electricity from coal, about 63% of total generation and more than 25% higher than total European power generation from all sources. Although significantly less then China, India still generated 1,125.7 TWh from coal last year, but this accounts for a larger proportion of total national generation – 72%. In contrast, renewable energy generation, excluding large hydro, last year, stood at 863,1 TWh in China and 151.2 TWh in India.

Coal phase-outs in China and India are thus immensely more challenging than in countries like the UK or France, or even in developed economies with relatively high historic dependencies of coal, such as Germany and the US.

In addition to domestic production, both India and China already import gas. China by pipeline from Central Asia, Myanmar and Russia, and as LNG from multiple sources. India is steadily building up its LNG import capacity, with imports reaching 35.8bn m3 last year, up 10.2%, despite the impact of the coronavirus pandemic. Chinese LNG imports jumped 10.6% to reach 94bn m3 in 2020.

LNG-to-power supply chains could therefore play a significant transitional role in providing early reductions in GHG emissions from coal-fired generation, and potentially a longer-term role if coupled with carbon capture, utilisation and storage (CCUS). LNG in transport also offers potential in terms of oil displacement, particularly with regard to long-distance heavy goods transportation and shipping on inland waterways.

The key question is whether the emissions reductions are positive when all GHG gases are taken into consideration. LNG results in lower CO2 emissions than coal, but the picture is less clear when methane emissions are included. Measured over a 20-year time frame, methane is around 86 times more potent in terms of forcing global warming than CO2, and about 28 times more potent when measured over a 100-year time scale.

However, measuring methane emissions is not easy and different methods can result in considerably varied results. Methane emissions in the LNG-to-power chain come from upstream processing, which includes venting and flaring, as well as fugitive emissions, which occur during transmission and distribution, including LNG shipping.

Measurement is either top down or bottom up. The former uses aerial methods – planes, drones or satellites – and measures methane concentrations in the air. A key problem is that, while aerial surveillance measures emissions from all sources, is not easy to ascribe the methane to a particular land-based activity as methane comes from multiple sources, including agriculture.

The bottom-up approach is site specific, but based on a representative sample of ground level devices, which may not capture all individual points of emissions, potentially leading to under-reporting. Ground-based measurements generally use standard emissions values for particular activities multiplied by gas volumes. Activity levels for different sites change and periods of very high emissions from unmeasured emissions points can be missed.

Using both methods and then reconciling the data provides the most complete picture, but one that still lacks accuracy.

Broadly, non-industry actors, such as non-governmental organisations and governments, assume that industry measurements under-estimate the extent of methane emissions, which suggests that confidence in methane emissions measurements will only rise when they are made by independent third parties rather than the oil and gas companies themselves.

The majority of methane emissions result from upstream activities, which vary considerably depending on the type of gas field and the level of venting and flaring (see Figure 2). Particularly when it comes to combined oil and gas extraction, this can depend on the level of gas takeaway capacity, which might lag that of oil – examples being Brazil’s subsalt oil development and US Permian basin oil extraction. It also means that methane emissions levels are not static but can change over time. 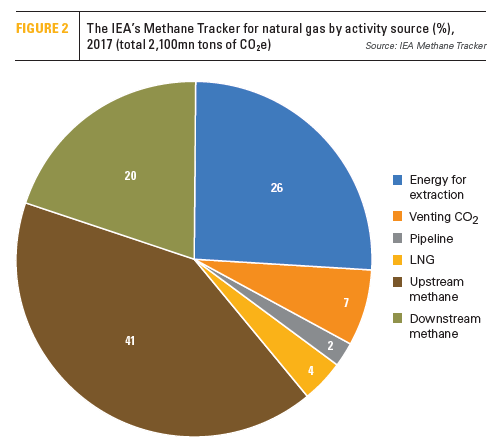 In addition, for countries with large gas systems, such as Russia and the US, gas is comingled from different fields with different methane intensities, complicating any assessment of the methane intensity of the gas flowing to consumers via a pipeline or into an individual LNG plant. LNG projects with dedicated upstream operations – for example Qatar’s North field expansion – therefore have a considerable advantage when it comes to GHG emissions measurement and abatement.

In many cases, aggregated national upstream data is used to calculate average methane intensities which are then applied across the board. These fail to differentiate LNG operations that could have much higher or lower methane intensities, depending on the source of their feedstock gas and the design of the LNG plant.

The IEA says electricity produced from gas transported as LNG results on average in 45% lower GHG emissions than coal, but the OIES notes that the key phrase is “on average”. This is because just as the methane intensity of LNG operations varies, so too does the methane intensity of coal from different countries. GHG calculations for gas-to-coal switching need accurate assessments of both the methane emissions from the LNG consumed and the displaced coal.

According to the IEA, methane emissions reductions from oil and gas operations are among the most cost-effective actions that governments can take to achieve global climate goals. Under the agency’s Sustainable Development Scenario, oil and gas sector methane emissions need to fall from around 72mn mt of methane in 2020 to about 20mn mt in 2030.

This means a drop of more than 70% from a year when methane emissions were low because of the general fall in oil and gas activity as a result of the coronavirus pandemic.

The IEA believes this reduction is technically feasible, and that a significant share could be abated at no net cost to companies because methane is a saleable commodity.

However, the IEA also notes that many companies often do not take advantage of the opportunities. There is a lack of knowledge about the extent of methane emissions, the abatement technologies and a general concern that identifying methane emissions will only lead to higher compliance costs.

Moreover, the agency says “methane abatement may falter without policies that require and incentivise productive use of natural gas,” a statement difficult to reconcile with the environmentally-driven need to reduce gas use overall.

LNG producers are increasingly focussing on GHG emissions reductions from their operations, principally through decarbonising power usage at LNG plants, for example by using electric drive motors powered by renewables for compression and by building CCS facilities, both of which target CO2 emissions.

The EU’s Methane Strategy suggests at least an equal focus on methane emissions will be necessary, which will require better developed and transparent measurement, reporting and verification (MRV) systems for individual LNG-to-power supply chains.

This will require a change in company priorities. Methane emissions mitigation projects are generally weighed up on a financial basis – often the costs of measurement, intervention and abatement either do not cover the potential rewards or do not provide a sufficiently compelling business case to compete with other demands within the company for capital.

The EU’s Methane Strategy is in part an attempt to change the balance in company decision-making by creating disincentives for not pursuing methane emissions reductions projects – i.e. regulatory compliance becomes the main factor pushing forward projects which might otherwise not meet a company’s expected rate of return and thus a positive investment decision.