Romania is a relatively closed-off gas market and one that remains better known for its oil than its gas production. 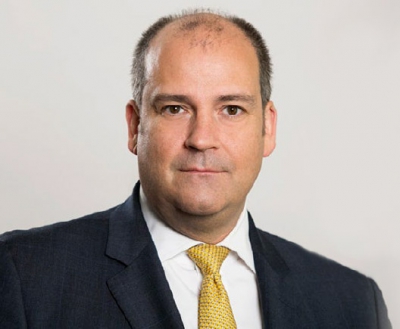 Major but expensive gas finds in the Black Sea such as OMV’s Neptun are taking time to come to market, partly owing to regulatory uncertainties about taxation and export opportunities a few years ago that sparked fury among the upstream community. It complained about regulatory uncertainty and threatened to quit.

This has in passing given a break to smaller companies such as Serinus, active in Satu Mare, who have a longer window to exploit the potentially rich onshore resources – in aggregate possibly bigger than the Neptun find.

CEO Jeffrey Auld told NGW in a March 18 interview: “These fields along the Hungarian border each with an average size of 4-5mn barrels of oil equivalent (boe) are little gold-mines. If you put a handful together, the rates of return are fantastic. We are getting good returns even at the bottom of the threshold and this is going to get better,” he said.

The company is developing the Moftinu field where it has 3,000 km2 in the northwest of the country, close to the border with Hungary and Ukraine. The gas is relatively shallow at about 1 km beneath the surface; and it is sweet, comprising 97% methane with some condensates, which are a bonus, Auld said: “The above-ground installations are what you would see in Alberta or Oklahoma.” And it is close to the Transgaz high-pressure pipeline network, further saving costs on connections to the grid. 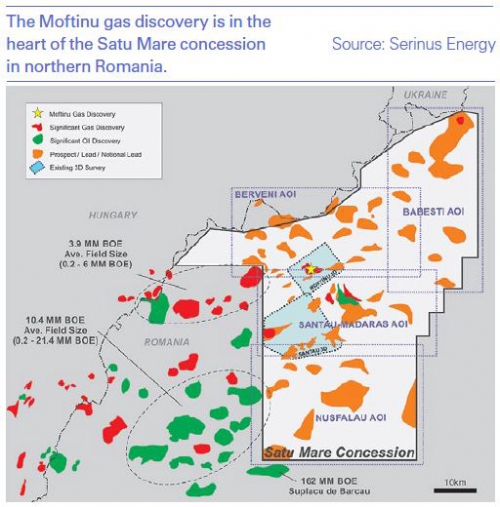 The company, like most others in the sector, ran into difficulties last year with the onset of the pandemic. It began well with solid cash-flow, he said. Then oil and gas prices slumped, leaving the company with $33mn debt to service. But it renegotiated it at 50 cents to the dollar and repaid it which, after an equity raise, left it with $4.5mn. It spent $3mn on another development well.

“The well we drilled, Moftinu-1008, was an excellent well and tested 4mn ft3/d. But that was not ideal use of the money: it was not going to be another well giving 6mn ft³/day.” The aim is to keep the Moftinu processing plant at around its capacity of 15mn ft³/d. The five wells so far are capable of producing an aggregate 22mn ft³/d.

“There are no existing wells, but there is a ton of seismic data that has been ignored. And there are many old oil wells and 2D and 3D seismic covering much of the Satu Mare concession. Old oil wells tended to bypass shallow gas as they targeted deeper oil plays. The -prospective resources are 73mn boe, risked; or 44mn boe on a P90 basis,” he said.

Serinus is also planning an exploration well at Sancrai, which Auld says is an analogue of Moftinu, at a cost of $3mn. Gas resources initially in place are 8.2bn ft³ at P90 and 18.5bn ft³ at P50. Depending on the flow rate, the gas will either be tied back to the Moftinu processing plant, or a separate processing plant will be built to service production from more wells.

Despite its reputation for non-EU compliant governance which is not unusual in the Balkans, Auld applauds the country’s efforts to improve. “Romania is a nascent EU member state. It is trying harder than some other countries and it is a benign place to operate. I’m very impressed. It is harder in Hungary, which is on the other side of the border from our Satu Mare licence and so has the same gassy prospects we are working on.

“There is a lot of gas historically in Romania but it was not really the focus of anyone’s attention: oil was the attraction. So OMV (via Petrom) is operating the big onshore oil fields south of where we are, such as Seplacu de Barcau with 162mn boe; and we do not want that. 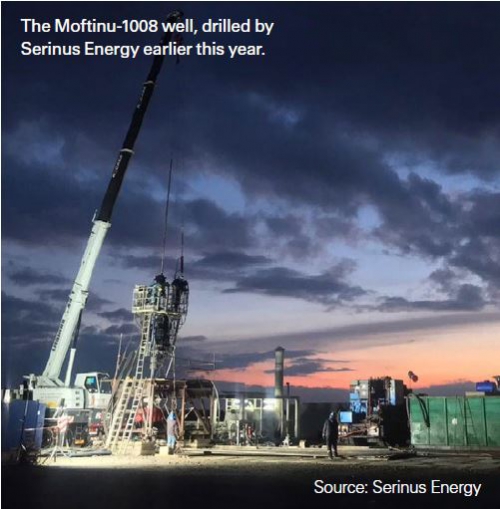 “OMV also has the giant offshore Neptun field. But the equivalent of the Neptun field is dotted around Romania in small reservoirs. Romania could do more to incentivise onshore gas production. That gas could be aggregated and marketed. But first gas from Neptun is so far away, it’s not even on my mind,” Auld said.

“We are doing a good business even in bad years; we built our business based on the lowest case, so anything above that is the icing on the cake. Our production expense in the three quarters to September 30, 2020 was $8.96/boe, meaning that we are cash-flow positive even at very low commodity prices.

“We sell most of our gas output to the trading house Vitol, indexed to the Bucharest commodities exchange. This is typically a 20% premium to the Dutch title transfer facility [Europe’s most competitive, liquid hub]. Gas is very seasonal and there is not much storage and Romania doesn’t import or export much, although five years from now I imagine there will be much more gas trade with the rest of Europe.

“The pipeline operator Transgaz pumped gas into the grid in March and April last year using linepack for storage; but that was exceptional. Generally, as demand sags, the gas price dips from about $10/’000 ft³ in winter to half that in summer [in 2019]. The price is always set at the margin, which means electricity and household heating needs determine the price. There is not much demand for cooling in summer.

“All our customers are industrials or power generators and we have no problems at all with receivables. We also have a trading subsidiary which sells only our own output. But later that might change.

“The gas market in Romania is very illiquid, which means prices get very volatile. Derivatives such as put options do not influence our returns at a reasonable cost and we are better off dealing directly with the customer. We keep our costs low and our production stable and that way we can absorb the commodity price risk,” Auld said.

Falling into a legal crevice

Serinus is recognised as the sole owner of the Moftinu licence, as the original, 40% partner has defaulted on its obligations under the joint operating agreement since at least 2016.

Oilfield Exploration Business Solutions (OEBS) is a subsidiary of Rompetrol, which in turn is owned by Kazkahstan’s state oil and gas company Kazmunaigaz. Under the terms of the joint operating agreement (JOA), its defaulted equity reverts to Serinus.

However, OEBS has ignored Serinus’ request that it notify the regulator, NAMR, that it is no longer a shareholder and until it does so, the government cannot gazette the transfer of title to Serinus even though it accepts that Serinus is the sole owner. Hence the need to go to arbitration.

Auld said: “We receive 100% of the revenue, we provide 100% of the work programme and 100% of the parent company guarantees and take all the risk in the Satu Mare licence. We have taken them to arbitration to force them to transfer their defaulted interest.”

“OEBS cannot now back into the licence by paying their percentage share of all the costs so far. The JOA excludes that option,” he said.

Typically, JOAs have provisions to encourage all parties to risk their capital in drilling a well at the same time. So entering a well that subsequently proves a success carries a premium.

“We would like to be able to farm out some of that stake in the 3,000 km2 to another partner. Philosophically I do not want to have 100%. It is better with the right partner who can share risk and costs and accelerate developments,” Auld said.