In Asia, LNG liberalization has enabled the region to overcome a lack of pipeline infrastructure—producing Asia’s first natural gas benchmark with LNG contracts settled against the Platts LNG Japan Korean Marker (JKM). The success of JKM raises the question of further evolution - whether stakeholders will continue using existing pipe gas benchmarks in the US and Europe, or if new benchmarks will emerge. In addition, if LNG is viewed as a virtual global pipeline, the development of a supporting freight market could provide important price transparency for transportation between major trading centres.

So what factors are necessary for benchmark status? And how do market fundamentals and liquidity interact to realize this?

Liquidity is an important measure in determining a market’s ability to achieve its main purposes: provide price discovery, transparency, and allow for efficient risk transfer between participants. A liquid market also fosters efficient competition, encouraging the optimal allocation of an asset. A market is considered liquid if participants can easily transact large volumes with limited impact on asset prices and low transaction costs. Liquidity also dictates decisions around whether to trade—the size of an order that can be executed, order sizes available at different price levels, and the ability to execute a timely trade to minimize slippage losses.

Critically, well-functioning spot markets are the nexus of forward markets, in that they are an important factor in achieving benchmark status. In Europe, the UK National Balance Point (NBP) and Dutch Title Transfer Facility (TTF) are already well- functioning spot markets, and JKM is now establishing itself as a credible spot market through factors such as the use by Platts of the Market on Close methodology in the determination of the JKM price assessment.

Europe has liquid spot and futures markets for natural gas, coal, carbon, and electricity, which facilitate fuel switching in its electricity-producing sector. Because of Europe’s effective response to changes in natural gas prices, it can absorb excess supply of LNG which is not sold in Asia. In other words, the liquidity of Europe’s natural gas markets, in combination with excellent gas infrastructure, supports its role as the world’s balancing market for LNG.

Gas hubs are marketplaces—whether virtual or physical—run by hub operators, where participants can transfer the title on natural gas already present in the transmission system to other market participants. This service, together with standardized contracts, can help the development of a liquid gas market.

Over the past approximately five years, liquidity at TTF has grown relative to NBP. This development was driven by the rise of gas-on-gas indexation in northwest Europe, which increased the need for hedging and bolstered liquidity of the forward market, amid a preference for Euro-denominated contracts. 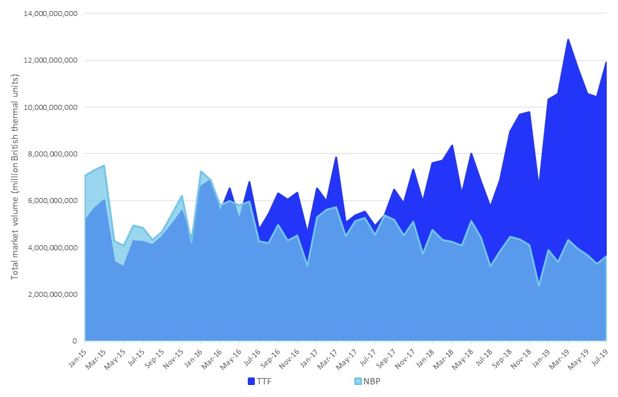 Today, TTF has replaced NBP as Europe’s main gas hub and benchmark price, a clear case of liquidity coalescing around the most suitable benchmark for a given market. The network effect of markets has already supported the rise of TTF—as its momentum attracts new users, its value and utility are boosted for current and future customers. Already in 2019, TTF’s volume surge (42 per cent year-on-year) is likely driven by its role as the global balancing market for LNG. This virtuous cycle of liquidity looks set to continue as TTF becomes more internationalized and embedded across financial markets, cementing its benchmark status as the Brent equivalent of natural gas. The development of the liquidity of these benchmark hubs can be illustrated by means of the change in churn rates; the proportion of the trading volume to physical demand. The figure below shows the development of key natural gas benchmarks since LNG liberalization provided the catalyst for the creation of a global natural gas market, and illustrates the rising prominence of both TTF and JKM.

Are there credible challengers to TTF? German lawmakers have put the obligation on domestic pipeline operators to merge the two existing market areas, NCG (NetConnect Germany) and Gaspool, by 1 October 2021. However, reaching this final stage of market consolidation in Germany is a very complex and costly exercise and is not expected to improve liquidity. Instead, the German energy market regulator and industry concluded that any further market integration should include at least both German market areas and the TTF. Many stakeholders, in particular traders, took the view that the liquid TTF market provides them with sufficient opportunities to hedge their exposure to the German gas markets. In addition, with gas-on-gas pricing substantially complete in Europe and the dramatic associated rise in TTF liquidity, any attempt by Germany or other challenger hubs to create a benchmark would need to be compelling enough to change entrenched market behaviour. 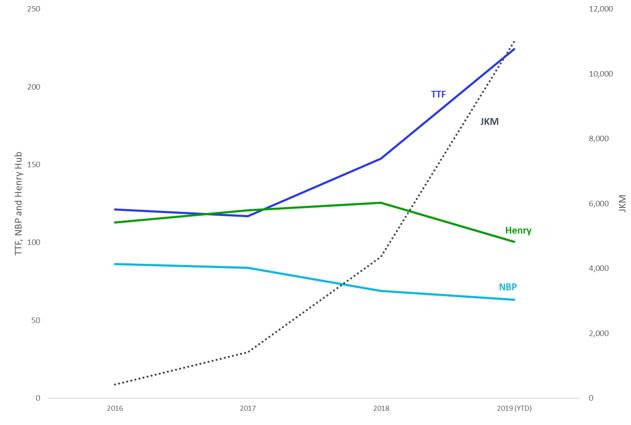 The future of Henry Hub

In the US, Louisiana’s Henry Hub is the most well-known natural gas hub, connecting on and offshore pipelines from Louisiana, Texas, and the Gulf of Mexico. Yet over the past decade, the shale gas revolution has turned the US into a net exporter of gas—with Marcellus and Utica in the northeast and Permian, Haynesville and Eagle Ford in the south, all having greater proved reserves than the Gulf Coast in the US. Locational pricing has come to the fore, challenging Henry’s status.

While Henry Hub continues to be important due to entrenched market behaviour, its dislocation from pricing in North America presents a compelling catalyst for change. As the first US company to export LNG, Cheniere Energy exclusively used Henry Hub indexation before 2015 in their take-or-pay-style sale and purchase agreements. The indexation to Henry provided a perfect hedge for Cheniere’s feed gas exposure, whilst the fixed capacity payments in the region of $3 per million Btu (British thermal units) provided the certainty of revenues to finance the expansion of Cheniere’s liquefaction facilities. In late 2015, however, Cheniere started to enter deals with the large European utilities Électricité de France and ENGIE, utilizing European benchmarks such as TTF.

In addition, the use of Henry Hub predates a global natural gas market; it began at a time when there was clear margin differential between it and natural gas markers in Europe and Asia, providing a compelling price advantage for buyers to take Henry-indexed contracts whilst providing an effective hedging marker for US exporters. Now, low global natural gas prices, driven by a healthy supply of LNG from around the world, mean tighter margins and a buyer’s market. New export facilities in the US will find it more challenging to tie themselves to the Louisiana marker. This is illustrated in the figure below by means of the significant moves in the spread between the price on Henry Hub and US Gulf Coast LNG and the fact that the latter is closely correlated to the price of LNG in North East Asia. 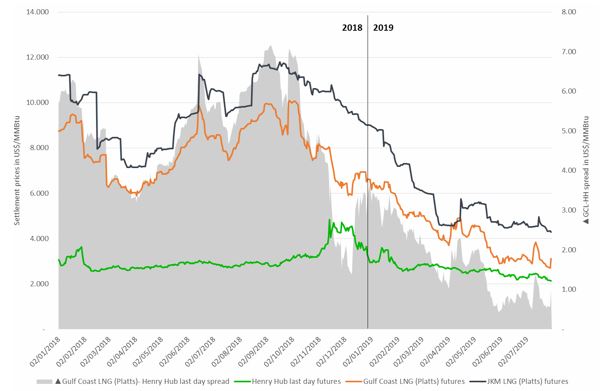 As recently as June 2019, further evolution in global natural gas dynamics impacted contract structure, with the announcement of Cheniere and Apache’s long-term gas supply agreement, which will be indexed to global LNG prices. This is potentially significant in two respects: instead of Cheniere back-to-backing its feedgas exposure through a risk transfer to the buyer of LNG, it is now managing its feedgas exposure through a risk transfer to the seller of the feedgas. So whilst the end buyer of LNG may be more hesitant to accept the risk transfer, the dislocation in price formation within the US between shale basins and Henry Hub (where we have recently seen negative pricing in the Permian Basin) enables US shale exploration and production companies to accept this risk transfer, and provides them with more upside to access global natural gas pricing.

Will China’s rise result in a new Asian benchmark?

As seen in Europe, the move from oil-on-gas to gas-on-gas pricing will be a determinant in the growth of JKM. Underpinning this is the fact that LNG pricing in most long-term LNG sale and purchase agreements is based on the price of crude oil. The decoupling of oil and LNG prices is putting pressure on that pricing structure and will help speed the transition, along with the unwinding of these legacy contracts.

With Asia as the key buyer of global LNG, and Europe as the world’s balancing market, the interplay between Europe’s TTF and JKM will underpin pricing formation for global natural gas. JKM has already hit key milestones—the ratio of the spot LNG to derivative market is now 1:1, indicating the same amount of trading in derivatives as physical markets. In this way, a virtuous cycle of liquidity will feed more derivative volume and use for physical indexation. JKM’s broader use underscores its credibility—recent agreements between Tellurian and Vitol and between Tellurian and Total both used transaction prices based on JKM, and noted its suitability for a global portfolio. These deals were groundbreaking as the first deals struck by a US exporter to an Asian natural gas benchmark.

Meanwhile, China is expected to lead global demand for natural gas and LNG over the coming decade, as it seeks alternatives to coal amid intense policy pressure to reduce air pollution and meet its climate change objectives. Some analysts believe that once energy market reforms in China occur, supporting cleaner fuels and growth in gas consumption, China’s ability to switch fuels for its power sector will overtake Europe’s. They note that China will have increasing flexibility in conventional power generation, and suggest the global natural gas price could therefore be set in China.

Yet market shifts may not necessarily determine benchmark status, and China faces some challenges, with its push to establish yuan-denominated benchmarks in oil and other commodities still nascent. JKM has already been updated to reflect the spot market value of cargoes delivered ex-ship into China and Taiwan, as well as Japan and South Korea. Given current momentum, the time it would take to address hurdles to a Chinese benchmark could see the network effect around JKM overcome any challenger price marker.

Conclusion—benchmarks for a global market

As new deal types proliferate, a range of hedging products remains critical. Some players who signed deals when LNG exports were still nascent say contracts must change so that a greater portion of market risk is borne by LNG projects rather than buyers. In April, NextDecade’s 20-year agreement with Royal Dutch Shell was the first long-term contract with US-produced LNG to be indexed to Brent, boasting full destination flexibility. And Tokyo Gas recently signed a long-term deal with Royal Dutch Shell, in what was believed to be the first time a coal pricing index was used with an LNG contract.

While benchmark contenders may emerge, experience has shown that liquidity will continue to coalesce around a few key benchmarks—and other hubs or markers will trade as a basis to these, in the absence of a breakdown in market fundamentals. In addition, the existing network of major gas hubs and markers is sufficient for global liquidity, now connected by LNG freight movements across continents.

Amid market upheaval—the liberalization of LNG, a shift towards gas-on-gas pricing, and the decoupling of oil and natural gas markets—TTF and JKM are emerging as robust and distinct global benchmarks. Whether JKM will remain Asia’s only benchmark is yet to be determined, though its ongoing rise seems assured.

You can download the Oxford Energy Forum – LNG in Transition: from uncertainty to uncertainty – Issue 119 here.