The current price support is not expected to last into the spring, with fundamentals suggesting an over-supplied LNG market and low prices for the next two or three years outside the peak winter period. The anticipated low prices and plentiful supply are encouraging policy makers and LNG importers to move ahead with major gas-fired projects, which should boost demand growth over coming years.

Towards the end of October, Asian LNG spot prices reached their highest in more than 20 months on robust buying ahead of a colder-than-expected winter. The average LNG price for December delivery into northeast Asia was about $7.50/mn Btu on October 30 – up $1.70/mn Btu in two weeks (see chart). Prices were boosted by strong buying from Japan, China, South Korea and Taiwan, along with multiple supply outages. However, looking ahead, an anticipated full recovery in US output by December (once the hurricane season is finally over) is expected to increase cargo flows to Asia and help cap price gains for deliveries early next year. 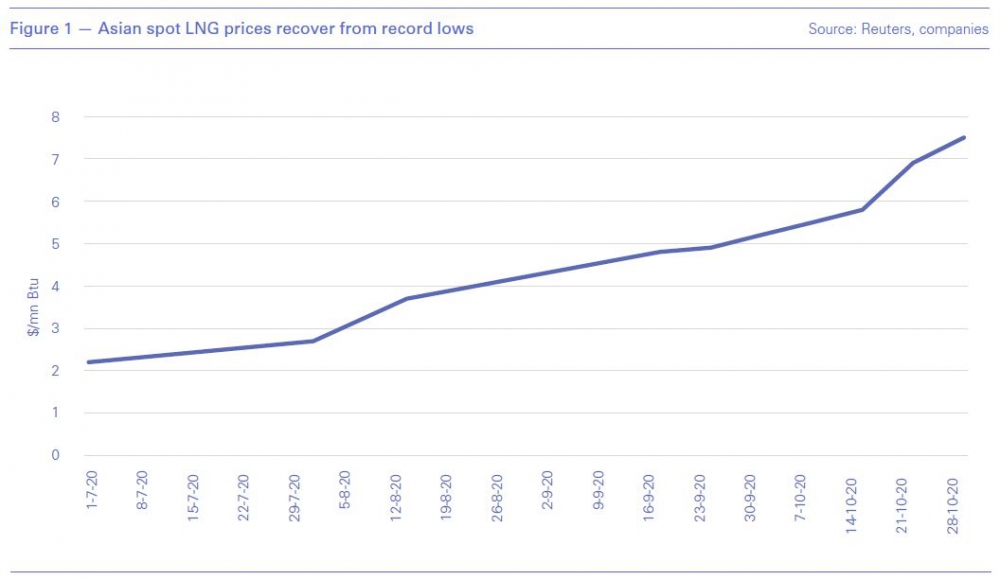 Until recently, the Covid-19 had hit gas and LNG demand growth in most regions, putting downward pressure on prices through the spring and summer and hitting record lows in all three key markets – the US, Europe and northeast Asia. Gas demand in Europe fell 12bn m3 or 4% in the first nine months of the year, although there was a 6% rise in European LNG imports – owing to a rebound from weak demand in early 2019 when prices were much firmer relative to pipeline supplies. The firm LNG imports squeezed Russian supply to Europe, with Gazprom seeing its pipeline sales fall by 9% to end-September, according to the IEA on October 12. Speaking at a recent conference, Gazprom Export’s CEO, Elena Burmistrova, blamed US LNG exporters for unbalancing the market, saying that Gazprom had acted “responsibly and self-confidently” by taking a hit to its sales rather than flooding the market.

But by September, the positive trend in European LNG imports had reversed. The drop was due to multiple global supply outages, including in the US and at Australia’s Gorgon, Norway’s Hammerfest and Shell’s Prelude plants; along with demand recovery and higher prices in Asia and a lack of significant floating storage, according to one trader. In addition, competing pipeline supplies into Europe – which are largely oil linked with a three to six-month lag – saw prices decline in September, making them relatively more attractive to buyers. The lower LNG imports have led to a slight drop in European storage levels over recent weeks, leaving them below 2019 levels at the end of October, although still above average.

The steady rise in LNG prices and lower imports has helped push UK day-ahead gas prices up since the summer, trading above 40 p/th ($6.15/mn Btu) at the end of the third week of October for the first time since November 2019. At the Dutch TTF, prices were also up, to over €15/MW by late October. Both benchmarks had slumped to historic lows in the summer as a result of lockdowns and overflowing storage.

The stronger short-term prices have helped support longer term values, but a likely rise in LNG imports into next year – once the Asian winter demand peak is past and current outages in the US and elsewhere are resolved – could reverse this. Demand could also weaken with tougher Covid-19 restrictions across Europe, although strong residential consumption should partly offset this. However, US gas prices are firmer now thanks to tighter supply and recovering exports, and this could provide some support for international spot prices into next year as the pandemic impact eases: “[US prices] will be heading to over $3/mn Btu next year, and that’s causing prices to rise in Europe and Asia,” BP’s CEO, Bernard Looney, said in mid-October – although a weak LNG market by summer 2021, could mean commercial shut-ins for US volumes if domestic prices remain firm.

The current firmer spot market may also mean some oil-linked term prices become cheaper than spot, which may limit demand for spot cargoes. For example, Taiwan paid an average of $4.93/mn Btu for LNG in September, up 20 cents on August’s 16-year low. But it paid just $4.01/mn Btu for Qatari term purchases. These low prices have already seen Taiwan boost volumes under Qatari term deals this year by 10% to 4.04mn t (up to end-September). However, any expansion of term volumes may end up limiting the number of cargoes sellers have to offer on the spot market, resulting in a neutral overall impact on spot prices.

The bearish medium-term outlook for LNG prices along with increasing concern over climate change is giving buyers confidence to invest. In China, for example, the move towards carbon neutrality by 2060 is likely to significantly increase LNG imports, especially in the medium term, as the country begins to close coal plants – China has already informed Australia that it will not be buying any more coal.

LNG cargoes can even be sold on a low-carbon or zero-carbon basis, with the seller using carbon offsets or renewable energy credits to offset the carbon emissions from consumption of the cargo.  In most cases, these represent only a fraction of the total energy cost of the cargo and these types of deals can therefore be an attractive option for many end buyers.

Higher LNG demand could also come from South Korea and Taiwan as some nuclear units are closed, and from southeast Asia, where demand is being driven by declining domestic gas production, as well as policy moves in favour of gas. Domestic output is also falling in parts of the Middle East and India, where there is a switch away from fuel oil – rather than coal – towards gas in the power sector. India is also seeing growth driven by an aggressive expansion of its city gas distribution networks, accompanied by pro-gas policies designed to boost demand in the transport sector (CNG) and residential sector. In Europe, Poland has announced plans to accelerate its phase out of coal in favour of gas, and both Poland and Germany – where nuclear shutdowns are driving up demand for gas – are moving ahead with development and expansion of LNG import terminals.

Altogether, according to consultants Wood Mackenzie, global regasification capacity under construction is expected to hit a 10-year high at 144mn mt this year, which should allow for more demand growth in the market. Over a third of this will be in China, with gains also in India, Brazil, Croatia and Kuwait, among others. On the supply side new projects are being delayed, with global LNG supply growing at just 1% or 4mn mt/year to date, mostly in the US. However, longer term confidence in the market means there are few cancellations.

While most demand growth is in Asia, a large amount of the future supply growth (except Qatar) is in regions that are remote from Asia. North America and Arctic Russia will all contribute heavily to new supply, alongside Mozambique. This is likely to boost the trade flow between the Atlantic, where there is likely to be more of a net oversupply, and the Pacific, where there will be a growing deficit. Beyond summer 2021, supply growth slows down, which could see markets tighter than expected if all the new demand materialises as anticipated.