Shippers are looking for cleaner fuels ahead of international climate targets, especially those set by the International Maritime Organisation (IMO), which is aiming for a 40% reduction in greenhouse gas (GHG) intensity by 2030 (from 2008 levels) and 50-70% by 2050. Some jurisdictions, especially in Europe, are implementing tougher regulations. Until now vessel owners had mostly been focused on installing scrubbers or switching to LNG to remove sulphur content. Scrubbers continue to be attractive, with very low sulphur fuel oil (VLSFO) currently about four times the price of high sulphur fuel oil (HSFO), but they do not address over GHG emissions, (although any rise in the relative price of VLSFO will encourage the take up of lower carbon alternatives). 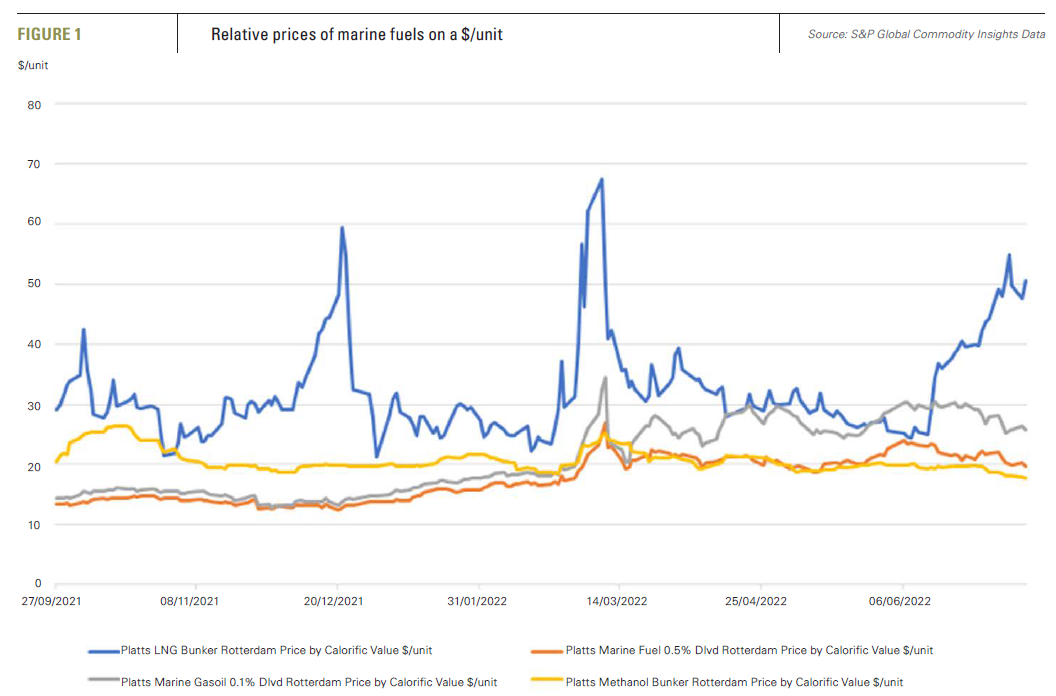 Switching vessels to LNG has so far been the most popular fuel switch to get closer to the GHG targets, as well as removing the sulphur, but the recent focus on methane as a GHG, as well as its associated CO2 emissions, could make it less attractive.

LNG only cuts CO2 emissions by 20-25% compared to conventional marine fuels; and producing “green” or lower carbon natural gas is only at an experimental stage – other than biogas, which is in short supply. In addition, current high gas prices, along with bullish price forecasts ahead for several years, are making the fuel very costly compared to alternative options (see figure 1).

Nevertheless, a typical vessel’s lifetime is 25-30 years so shippers base their fuel choice decisions on a long-term view of prices, rather than just the record current levels and near-term outlook – along with a long-term view of emissions regulations and targets, which are only likely to tighten given ongoing temperature records and extreme weather.

The main lower carbon alternatives to LNG currently are biofuels and low carbon methanol, while green/blue ammonia is also considered an option longer term. Biofuels are expensive and in limited supply, while methanol is currently dominated by hydrocarbon-derived production. However, there are multiple pathways to produce low carbon, carbon neutral and green methanol, and many projects are planned or underway.

A shipping expert said that while there were high prices for hydrocarbons generally, “methanol prices have not increased as much in comparison to fuels like LNG. There is definitely a growing argument that the increased cost of fossil fuels makes such alternatives more attractive, especially as the delta between fossil methanol and green methanol is decreasing.”

Chris Chatterton, COO at the Methanol Institute, said there had indeed been an increase in interest in methanol ready vessels, but “not yet at the same growth rate of gas-ready vessels.” He noted that while LNG was approved initially for inclusion in the IMO’s IGF Code, almost five years ago, methanol was approved much later and so has some catching up to do. “However, we have always suggested that methanol has less volatility than LNG with respect to pricing. Price is a key enabler for any fuel to be taken up at scale as it can represent up to 80% of running costs on board.”

As well as price, decisions will be made on whether alternative fuels comply with future emissions regulations, and here LNG could also be faring badly. For example, the EU is moving to include methane (28x the global warming impact of CO2 over the first 100 years) in its GHG emissions calculations for the marine sector (to be included in the emissions trading system), which could make LNG less attractive as a marine fuel due to methane “slip” (loss to the atmosphere) on vessels. It is also aiming to include nitrous oxide, which could affect the use of ammonia as a marine fuel because it produces the powerful greenhouse gas (273 x CO2) when burnt.

Methanol is currently mostly fossil based, so emits similar (slightly less) CO2 to conventional marine fuels. But Chatterton said that there was already sufficient green methanol available to fuel the methanol fleet if regulations were in place, and that many more plants were being built (more than 3mn metric tons/year of capacity). He said it was the lack of regulatory requirement that meant its use was limited. “So, it’s down to market leaders like Maersk, Waterfront, Proman (and others) who want to differentiate themselves.”

Since its first LNG vessel order in 2017, the major French shipper, CMA CGM, has been a strong advocate of LNG-fuelled vessels, and has among the largest fleets in the world. But in June it ordered six 15,000-teu dual-fuel carbon neutral methanol-powered container ships to be delivered by end-2025, alongside ten smaller LNG dual-fuel newbuilds. The inclusion of methanol options for the first time was a major change in direction for the company, which could trigger others to follow suit. CMA CGM says it is still considering all fuels, but this is a clear shift from its earlier exclusive LNG focus.

“This first order for methanol-powered vessels is in line with CMA CGM’s strategy to expand its energy mix with the goal of achieving Net Zero Carbon by 2050. CMA CGM is thus accelerating its decarbonisation trajectory by investing massively in gas and methanol fuels. The two sectors will be complementary for decarbonising the shipping industry in the years to come,” the company said in a press release.

While these are CMA CGM’s first methanol vessels, Danish shipper Maersk (which has tough corporate emissions targets) has already been investing heavily. The company recently ordered 12 such vessels, which will require 490,000 mt/yr of sustainable methanol. Maersk has already lined up supply from companies like Orsted and Proman. A senior executive said green methanol was the only “market-ready and scalable available solution” available today to decarbonise shipping.

Mitsui OSK Lines has also bought methanol-fuelled vessels recently (one delivered by a South Korean shipyard in November) and ordered another in March for use in domestic Japanese waters. X-Press Feeders, MSC and Danaos are among other shipping companies that have done so as well.

Currently, Waterfront Shipping (a subsidiary of Methanex, the world’s biggest methanol producer) has the biggest methanol-fuelled fleet, although it is all derived from fossil-feedstock at present. Nevertheless, these and other working vessels make methanol better established for marine transport than the competing hydrogen carrier, ammonia, which has yet to be used as fuel for shipping.

Despite the positive news for alternatives, the shipping expert said the most popular choices and viable options for the next five to six years would continue to be LNG bunkers, as well as biofuels, since they are drop-in fuels and require no engine modifications. “With over 1,000 newbuilds to date, LNG is firmly leading the order book,” the expert noted. And in mid-June, Platts Analytics said alternative fuels as a whole would not make a major impact for some time. The consultancy predicted LNG would reach 7% of bunker demand by 2030, while other alternatives would make up just 2% – with oil-based still at 91%. By 2050, LNG is forecast to rise to 12%, with other alternatives at 13%, and the remaining 75% oil based. The analysts qualified this, noting it was a conservative forecast that considered an expected lack of certain fuel availability – which could change if demand stimulates more production.

Beyond shipping, new fuels such as methanol and other hydrogen carriers could challenge gas in other areas too, especially in fuel cell applications used for remote/temporary power generation, where gas is less feasible due to a lack of infrastructure.