Freight rates are the last remaining bastion of opacity in the LNG business, an unregulated world of telephone trading where the health of business relations between the respective charterers, owners and their brokers can mean big profits or losses.

This matters for at least three reasons. First, the physical characteristics of LNG mean that the cost of freight can be over a third of the price of the delivered cargo, on the long US-Asia routes. This compares with around a sixth or a seventh in the case of crude oil or iron ore. Being able to hedge against the sometimes-wild volatility will attract more players.

Second, the point-to-point LNG world is coming to an end gradually and the new entrants will need to be able to enter and exit shipping positions quickly and cheaply. The growing number of US terminals selling LNG free-on-board to new entrants implies a big rise in the number of tankers available for work.

And third, apart from the efficiency gains and hence lower prices that transparency can bring, benchmarking and good governance are now corporate watchwords.

Most of the vessels available for spot LNG trade – and they are a small percentage of the total – tend to stay either in the Pacific or in the Atlantic Basin. At the moment the market is very tight, and prices have surged this autumn (see graph), but more uncommitted tankers are being built.

The other tankers were built for specific projects, where LNG is delivered ex-ship on term contracts from facilities such as Yamal LNG to the customer’s regasification terminal. This category makes up about 85% - 90% of the 550 or so tankers afloat.

LNG freight rates are a new addition to the London-based Baltic Exchange’s offerings: the BE has over 60 indices in all, for different-sized vessels, wet and dry cargoes and routes. Only four of those are gas, and of those, one is LPG. It is not a simple process: introducing a new index can take over a year of consultation and refinement, CEO Mark Jackson told NGW. Now it has three active LNG indices.

When LNG traders Jera Global Markets (JGM) and Swiss-registered Vitol executed the first Atlantic LNG freight swap against the BE's BLNG3 assessment, the market appeared to have taken another step towards maturity.

Affinity, which brokered the deal, said September 25 that interest in the "BLNG3 route has been off the charts as this trade lane links an increasingly liquid spot market in the Atlantic and the key demand centre for LNG in Japan. As the LNG market continues to commoditise, freight is now catching up with the cargo in terms of transparency and the ability to trade BLNG3 will become an important tool along with the [northeast Asian spot LNG assessment] Japan-Korea Marker and Henry Hub."

BE said it was "delighted to see the first trade settled against BLNG3. The Baltic's LNG assessments are being quickly adopted by this developing market as an accurate and reliable benchmark."

JGM said the management of the LNG freight price exposure is a key element of portfolio optimisation and risk management, but freight derivatives have been slower to develop than LNG and gas-linked financial products. 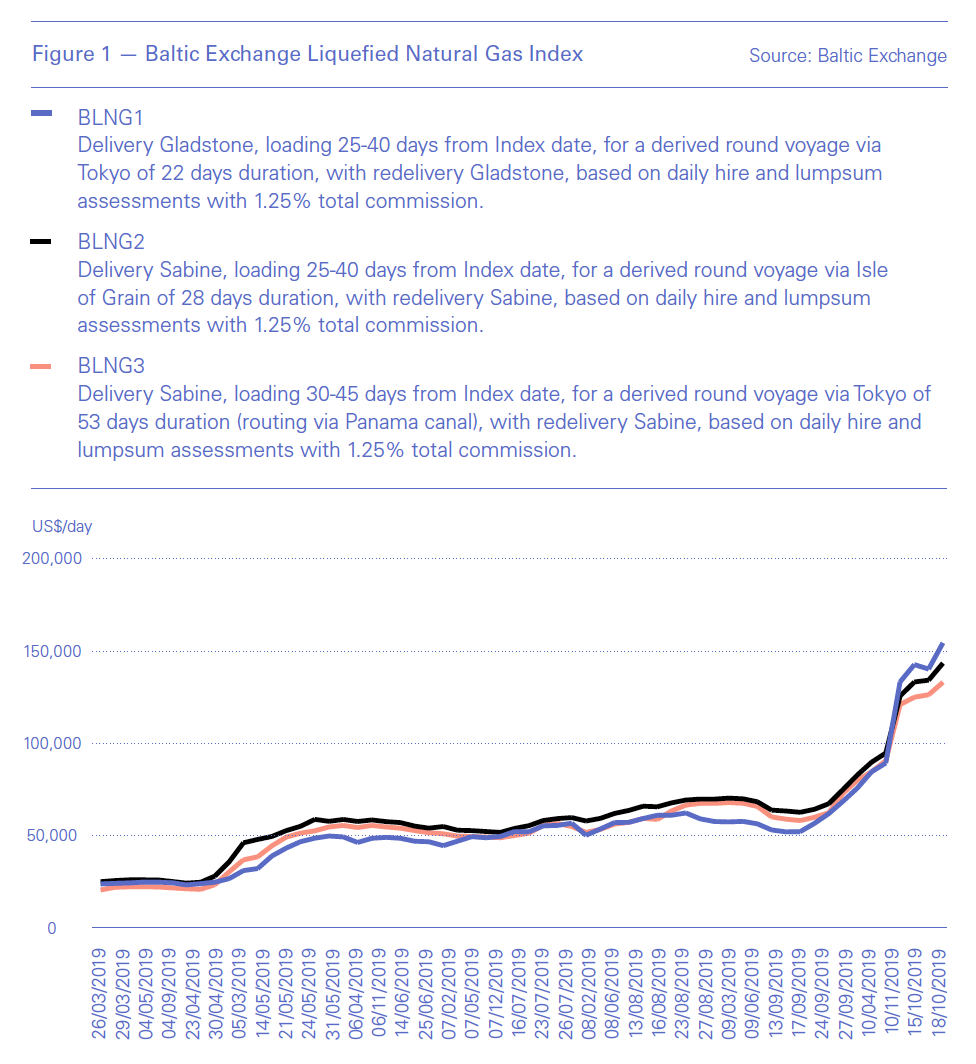 The BE produces its indices for forward freight agreements twice weekly, at 11 am on Tuesdays and Fridays. There are plans to make it more frequent as activity picks up, said Jackson. It began weekly a year ago and since then the fixtures have doubled.

BE has to vet a panellist’s ability to independently price the rate and circulates its own calculations to panellists for internal discussion on route or vessel description. Before going live, the market has to give feedback as well. BE has to register the new index with the ultimate regulator, the Financial Conduct Authority (FCA) and any subsequent change needs approval of the Baltic Index Committee and the FCA.

As brokers do not take title, they are indifferent to what the index is. However, the index is of great interest to traders and shipowners as it is a benchmark to measure their profits and losses against, Jackson said. And entering a one-year contract with a fixed price is a big risk for both sides – it might be signed when the market is at an exceptional price to which one or the other side will refuse to commit.

But an index, which can be identified in the contract, provides a neutral value that both sides can trust, and ultimately hedge against. Once liquidity grows, derivatives can follow. “We as the BE try to provide the thought leadership, and create tools for financial risk management, as the emerging LNG spot market grows,” Jackson said.

Broking and chartering are not regulated businesses, so it is down to the BE to verify the prices it receives and to explain any apparent discrepancies to the FCA. It also adheres to the code of practice of the International Organisation of Securities Commissions (Iosco), which aims to protect investors by ensuring markets are fair, transparent and efficient.

The BE selects and deselects panellists as it sees fit. They have to report what they have done every day and to normalise prices of off-specification trades to the actual index description, covering all the parameters of a vessel, and supply an audit trail. “The further away a trade is from the standard, the further away it will be from the assessment,” Jackson said.

Relying on market information about reported fixtures can be risky, he says. A few days or more can elapse between the counterparties agreeing the price and the contract signature, during which time the price could have moved. Or the agreement might have been quietly dropped altogether, meaning no contract is signed. A charterer might want to secure a range of options but only plan on fixing one. Or he might want to pre-empt a rising market and try to secure as many as possible in advance.

But a ship-broker should be able to tell what the vessel availability is like; know what spot contracts have been signed and at what price; and be able to fill in any gaps using past experience.

Shipowners do not have to provide notice of their fleet’s availability, so thorough knowledge of the whole market is important. BE takes all the panellists’ prices and calculates the mean. “They have the knowledge to make the assessment,” Jackson said, “but we vet them and ask what was the decision that led to the rate.” There is also a strict distinction between spot and term charters which can be for months: there is a difference between a three-month rate and a 10- 20-day rate. “It has to be a spot rate,” he said.

The benchmark is on a time charter equivalent basis with a panel of shipbrokers with no stake in the outcome providing charter rates and a ballast bonus and/or position fee assessment to give an effective rate paid by a charterer on round voyage terms.

BLNG3 is the 53-day round-trip voyage between Sabine Pass and Tokyo and so can be used to assess other routes between the US Gulf and Japan, through the Panama Canal.

The other BLNG swaps are BLNG1 for Gladstone – Tokyo, a 22-day round-trip voyage for a 166,000 m³ vessel which has traded once; and BLNG2, which is a Sabine Pass – UK Isle of Grain 28-day round-trip voyage, which has gone public but not yet traded. As with BLNG3, both can be adapted as appropriate to meet the needs of specific trades.