For all its negative press, global coal use is still growing. Nowhere is this truer than the Asian power sector, which is also one of the key markets for LNG and the arena where the fortunes of the two fuels are most closely intertwined.

Gas had a stellar year in 2018, according to the BP Statistical Review of World Energy 2019. Global consumption was up 5.3% year on year, while demand in the Asia-Pacific region increased by 7.4%. The percentage growth in gas use was higher than for any other energy source apart from renewables, which started from a much lower base.

By contrast, global coal consumption increased only 1.4% year on year in 2018, according to BP, while Asia-Pacific demand was up 2.5%. Both the global and regional percentage growth figures were lower than for any other fuel. 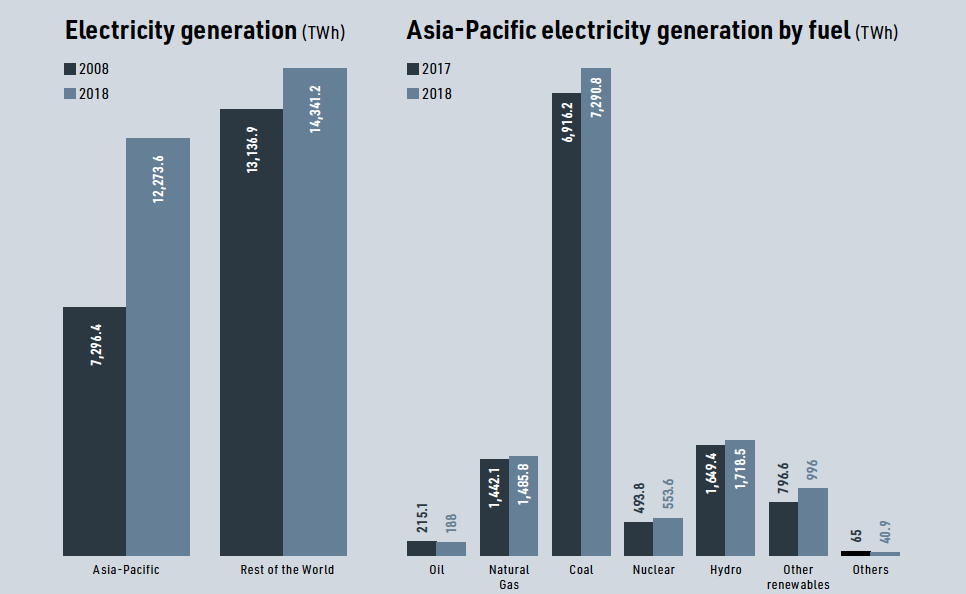 Global coal use would have fallen -- as it had each year from 2014 to 2016 -- but for growing power sector demand. “The growth in coal consumption was more than accounted for by increasing use in the power sector,” BP observed.

However, coal is on the back foot even in this sector. 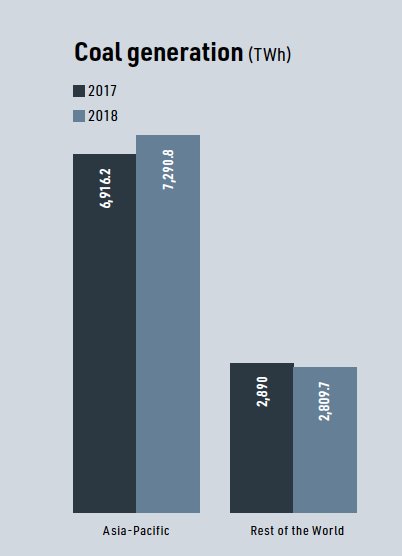 Down but far from out

However, coal’s woes should not be overstated. Coal use may be increasingly concentrated in the power sector, but this is where an increasing amount of energy use occurs. BP noted that in 2018 “global power demand grew by 3.7%, which is one of the strongest growth rates seen for 20 years, absorbing around half of the growth in primary energy.”

And while coal-fired generation is increasingly concentrated in Asia, this is where most electricity growth is projected to occur. Asia-Pacific generation jumped 68.2% between 2008 and 2018 compared with the puny 9.2% increase registered in the rest of the world. As a result, the region accounted for 46.1% of global electricity output in 2018 as against 35.7% in 2008.

Most Asian electricity is generated from coal, which accounted for three-fifths of total output in 2018. At 7,290.8 TWh the figure was 374.6 TWh up on 2017, meaning coal produced 54% of the 695.4 TWh of additional electricity generated in Asia that year.

While investment in coal-fired plant may be declining, the amount of capacity commissioned since 2006 means the Asian coal fleet is not only large but new. According to Global Energy Monitor, almost 1,055 GW of coal-fired plant was commissioned between 2006 and 2018, more than 90% of it in Asia-Pacific and almost 70% in China alone.

As a result, more than half the 2,015 GW of global coal-fired plant operational in January 2019 was commissioned in or after 2006. The figure rises to three-quarters in China, India and Indonesia, while in Vietnam it exceeds nine-tenths. The continued growth in coal-fired generation in Asia is thus unsurprising. 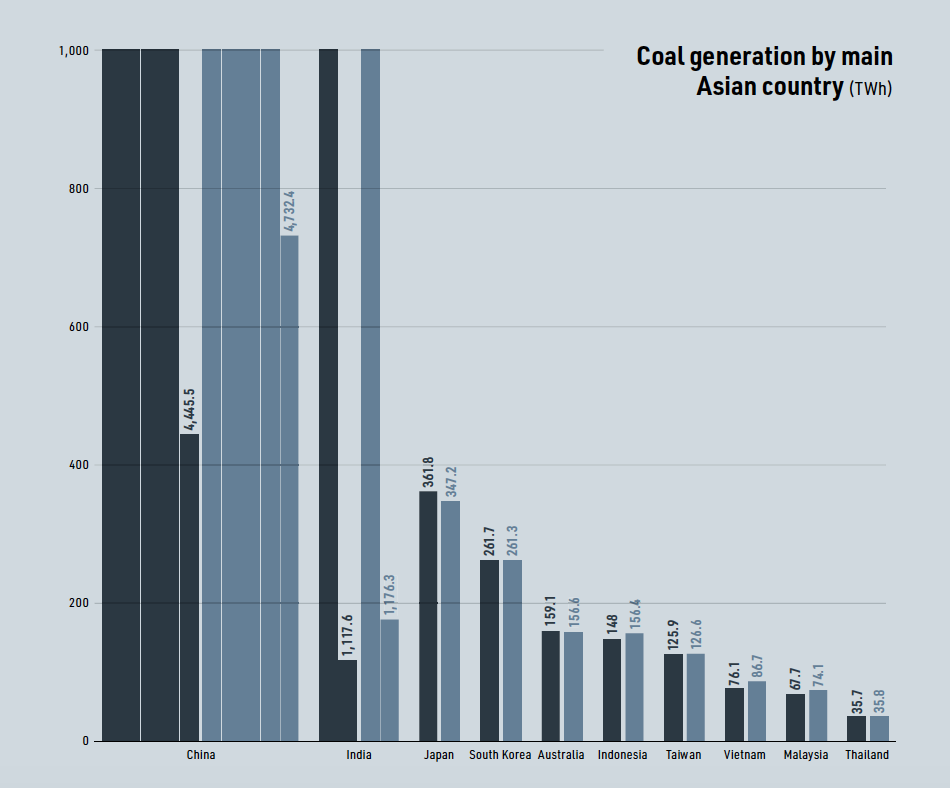 BP added that “to maintain the level of carbon emissions from the power sector at its 2015 level, renewable generation would have needed to grow more than twice as quickly than it actually did: by over 1,800 TWh over the past three years, rather than its actual growth of a little over 800 TWh.”

To put the increase in context, BP noted that the gap of “1,000 TWh is roughly equivalent to the entire renewable generation of China and the US combined in 2018.”

BP went on to note that “the same outcome for carbon emissions could have been achieved by replacing around 10% of coal in the power sector with natural gas.”

However, replacing 10% of power sector coal use with gas would not have been easy. Much of the low-hanging fruit has already gone, for instance through the closure of aging coal-fired plants in Europe. Admittedly, the 13.2% surge in US gas-fired generation in 2018 contributed towards a 5% drop in coal-fired output there. But cutting output from Asian coal plants would be more problematic.

Apart from the fact that electricity demand in the region is growing strongly, much of the Asian coal-fired fleet comprises large and relatively efficient units commissioned in the last 15 years. Most belong to state-owned entities, while almost all were financed with debt from state-linked banks that has yet to be repaid.

Added to this, coal-fired electricity costs less than gas in many Asian countries. Coal is widely available and often cheap, while carbon taxation and other government measures to penalise its use are for the most part limited -- not entirely surprisingly given that in many jurisdictions the state would be the main loser if coal plants became stranded assets.

The limited availability of spare gas-fired capacity or fuel to operate it is also an issue in some countries, including India, Indonesia, Vietnam and parts of China. With few exceptions the replacement of existing Asian coal-fired generation is thus not a near-term option, while the expansion of LNG supply chains is the most obvious means of supporting coal-for-gas switching.

The picture may be different in the longer term. While new gas-fired projects have little hope of competing against existing coal-fired plants, they could be more competitive against new coal-fired plants, especially if carbon pricing takes off.

The decline in FIDs and capital spending on coal-fired projects has already been noted. By contrast, FIDs for gas-fired plants were double those for coal in 2018, according to the IEA. In particular, it observed that “FIDs grew in China by 70%, and for the first time more gas-fired power capacity was sanctioned than that of coal.”

How much gas-fired capacity is actually built in Asia will depend on a number of factors. Among the main questions are, how fast power demand grows; how gas fares against renewables in meeting that demand; and how much demand is met by new coal-fired projects.

To take the last question first: declining FIDs and capital investment mean the amount of coal-fired plant commissioned annually in Asia will continue declining in coming years. But the amount will still be significant. Apart from plant currently under construction or approved, it is likely to include at least some of the currently shelved capacity.

Take China, for example. Some 128.65 GW of coal capacity was under construction at the start of 2019, while a further 69.95 GW has been approved. On top of that 278 GW has been shelved, some of it at an advanced stage of construction when work stopped. Given that many of these plants are supported by provincial or other local entities if not Beijing, the resumption of work on much of the plant is possible, albeit in cases unofficially.

Beyond this pipeline of identified coal-fired projects it is certain that more coal-fired plant will be implemented in Asia in the longer term. But it is not certain how much will be built and where. This will depend in large part on how government policies and carbon pricing evolve across the region.

The surge in Asian renewable capacity is also set to continue, but here too considerable uncertainty surrounds the scale of future installations. The location and pace will, as now, be influenced by national regulations and the price of solar and wind equipment. But it will also be increasingly affected by factors including national and regional grid developments, and the availability and price of land suitable for the installation of projects.

The biggest uncertainty, however, is future electricity demand growth. The power sector’s consumption of an increasing share of energy supplies is expected to continue; not just in line with the growth and shifting mix of economic activity, but also as electricity displaces rival fuels in, for instance, the domestic heating and vehicle markets.

Apart from affecting the overall growth in electricity demand these changes will affect consumption patterns. This will in turn help determine which generating technologies and fuels are the main beneficiaries. In particular, more variable diurnal and seasonal power demand will favour shoulder fuels such as gas rather than baseload generation such as coal. 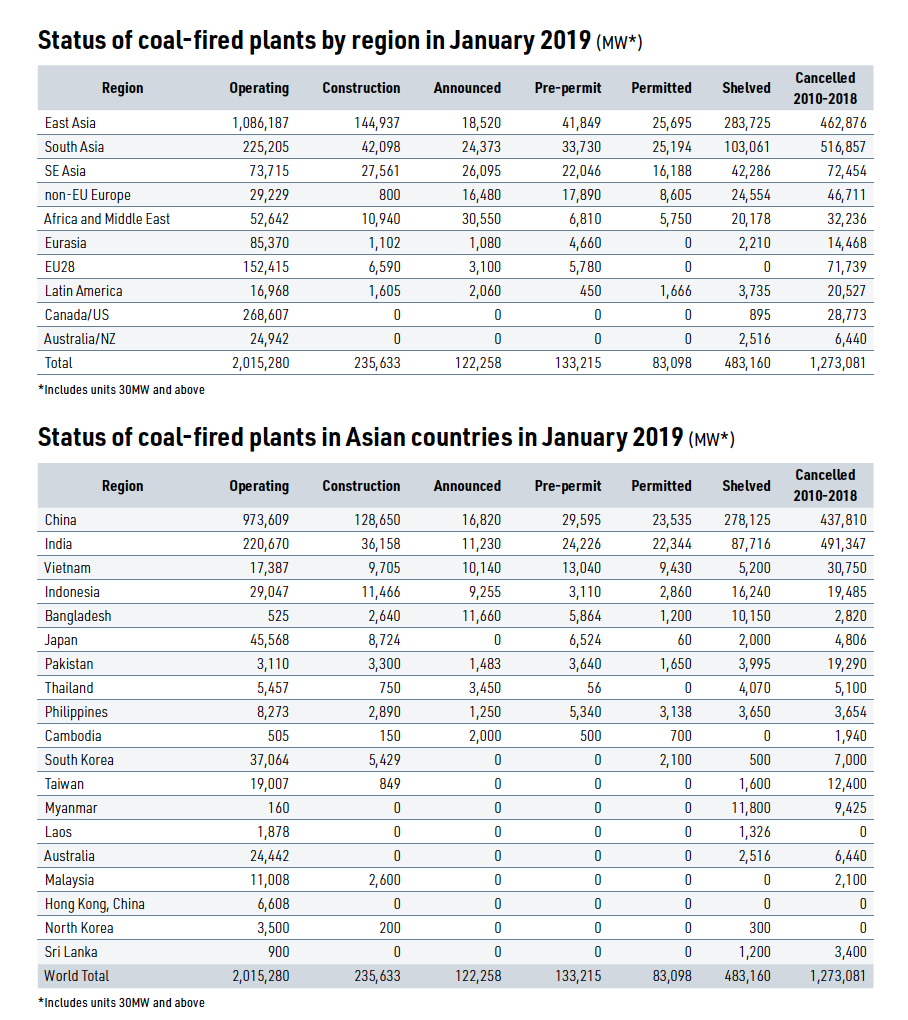 In this context it is worth noting BP’s observation that “much of the surprising strength in energy consumption in 2018 may be related to weather effects. In particular, there was an unusually large number of hot and cold days across many of the world’s major demand centres last year, particularly in the US, China and Russia, with the increased demand for cooling and heating services helping to explain the strong growth in energy consumption in each of these countries.” 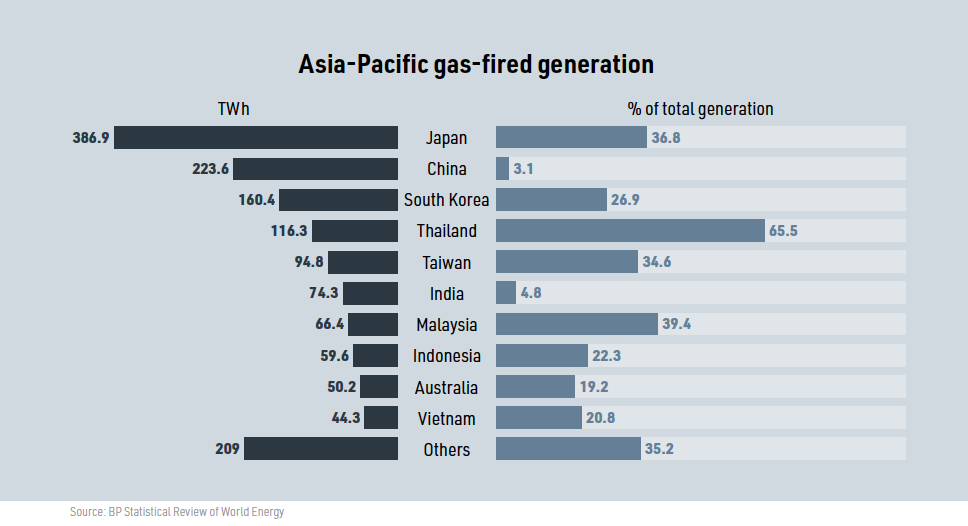 Given that such weather effects are often blamed -- fairly or not -- on carbon emissions from coal, there is a certain irony that one of their main impacts may be the need for greater intermediate and peak load generation, and thus greater gas use.