A report published in July by price reporting agency S&P Platts, New Horizons -- the forces shaping the future of the LNG market, charts the rapid rise in LNG derivatives volumes. Trade in LNG derivatives grew by 256% in 2018, following growth of 295% in 2017, albeit from a low base.

According to broker and exchange data reported by Platts, May saw a new record with 46,349 lots traded, equivalent to about 158 LNG cargoes, followed by 42,763 lots traded in June.

Almost all of this trade took place on the Intercontinental Exchange (ICE), where contracts are settled against the Platts Japan-Korea Marker (JKM) LNG price assessment for spot cargoes delivered into north Asian markets. The Chicago Mercantile Exchange also offers a JKM-settled derivative, but this appears to be attracting much less interest.

This indicates a growing forward curve which allows both physical and financial LNG traders to take and exit trading positions further forward with less risk that doing so will move the market substantially. Increased liquidity is also likely to see bid/offer spreads narrow, so that the cost of trading LNG derivatives falls. 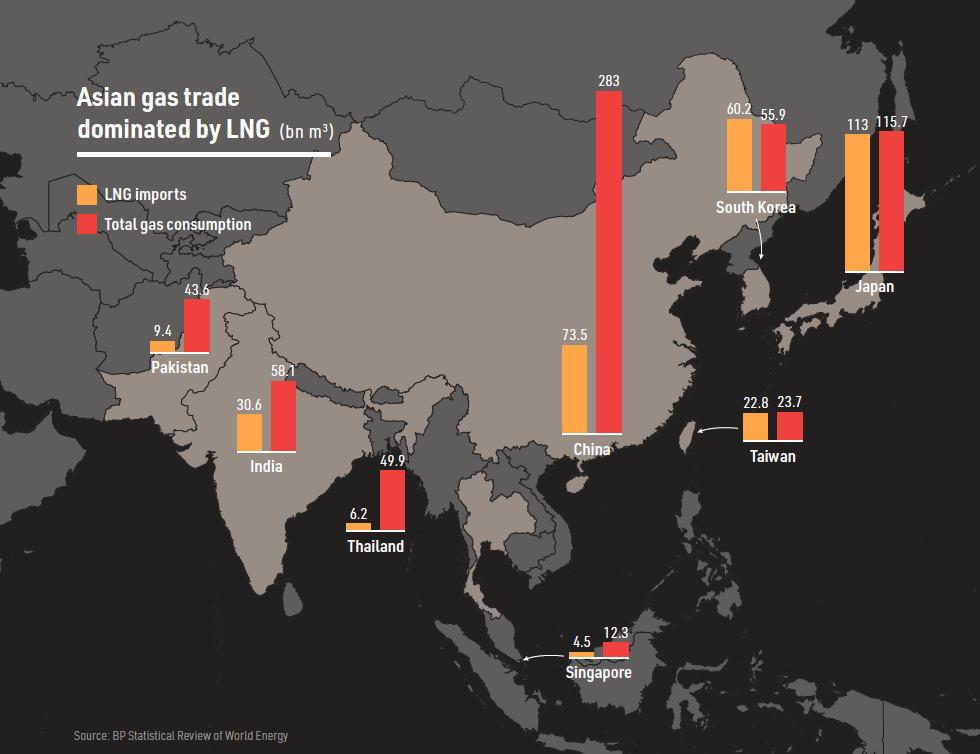 The Platts report noted that the total volume of JKM derivatives traded in 2018 amounted to the equivalent of 36mn metric tons, “just over a third of physical short-term and spot transactions.”

A report by GIIGNL, the International Group of LNG Importers, published earlier in the year estimated that 25% of all physical LNG volumes traded in 2018 were delivered on a spot basis – defined as cargoes delivered within three months of the transaction date -- and that a further 7% were delivered on a short-term basis.

At 32% combined, this was a significant jump from 27% in 2017. GIGNL attributed the increase to the start up of new US and Russian LNG production and to the growth of portfolio players, which aggregate both supply and demand-side contracts and optimise LNG trade between them. In addition, rising Chinese demand saw the diversion of cargoes to the Chinese market with Australia overtaking Qatar for the first time as a supplier of flexible LNG.

Rising spot market trade requires new price risk management tools, which allow traders to hedge sales and purchases. They need a contract that accurately reflects spot market prices which they can enter and exit easily and at relatively low cost.

In the US and Europe, LNG traders can hedge risk via exchange-traded derivatives contracts on gas hubs such as Henry Hub, the UK’s National Balancing Point (NBP) or the Dutch Title Transfer Facility (TTF). These are markets they are either selling into, in the case of the European hubs, or which they are selling out of, in the case of Henry Hub. These markets have plenty of liquidity providing confidence that positions can be entered into or exited when the trader needs. However, no such hub exists in Asia, which consumes the vast majority of the world’s LNG – 75% in 2018.

Rising liquidity in LNG derivatives has important implications for the evolution of an Asian gas hub. It suggests the Asian gas market will develop differently to the US and Europe, even if the emergence of a dominant Asian gas hub appears to make sense as a counter point to its US and European equivalents.

This should not be surprising because the Asian gas market is much more fragmented than the gas markets of the US and Europe, spanning multiple unconnected national markets as different stages of liberalisation and with very different regulatory regimes. The concept of an ‘Asian’ gas market only really makes sense if thought of in terms of LNG trade because it is LNG that can be arbitraged between Asian national markets, as well as between the Atlantic and Pacific basins. In Europe and the US, LNG is an adjunct to existing markets based around pipeline supply.

There are nonetheless three main contenders hoping to fill the role of Asian gas hub – Singapore, Japan and China.

Singapore has a cluster of trading companies, a well-developed financial community and an open liberalised market. It could provide independent regulation and arbitration and non-discriminatory third-party access to infrastructure, but it is a small market in physical terms. It has no domestic gas production to speak of and consumed 12.3bn m3 of gas in 2018, sourced primarily by pipeline from Indonesia, as LNG and a smaller proportion by pipeline from Malaysia.

Japan also has strong advantages but also some important disadvantages, first among which is that its gas market, while large, is not well integrated. Pipelines connect import points with local markets rather than forming a national gas system. In addition, the Japanese market is not expected to grow over the long term as the expansion of renewable energy sources and the return of nuclear reactors eats into gas’ share of power generation.

Japan also has no significant gas production of its own and no international interconnections for pipeline gas trade. The Japanese market is going through a process of liberalisation, and liquid gas hubs have historically emerged after rather than before liberalisation, but this may not be enough to foster anything more than localised gas trade at the wholesale level.

China offers much more in terms of both interconnections and market growth. Gas demand, including for LNG, is rising rapidly and the country is expected to overtake Japan as the largest market for LNG imports globally. Chinese LNG imports grew by 38.8% in 2018.

It also has multiple international interconnections, receiving pipeline gas from Myanmar, Central Asia and by the end of this year, if the Power of Siberia pipeline is completed on time, from Russia. It is also a major producer of gas in its own right; China produced 161.5bn m3 of gas in 2018, while consuming 283bn m3, importing 73.4bn m3 as LNG and 47.9bn m3 by pipeline, according to BP data.

However, the Chinese market remains dominated by large state companies and third party-access to infrastructure is limited, not just at LNG terminals but inland. The Chinese market is insufficiently liberalised to support the development of a regional gas hub, while concerns about market access, the continuity of energy policy and availability of independent arbitration also detract from its suitability.

The lack of an obvious candidate creates a vacuum which LNG derivatives hope to fill, but there is more to their potential for success.

LNG is the glue which binds fragmented Asian gas markets together and the primary means of price transmission. Access to domestic gas infrastructure, such as import terminals, storage and pipelines is not necessary for a commodity delivered by ship because there is no system balancing requirement. LNG carriers are the LNG market’s transportation system and the market for LNG carriers is open.

Even if the end markets lack liberalisation, there is sufficient diversity of buyers from multiple national markets to create active competition in wholesale LNG trade in Asia.

There is also no problem with a lack of a specific physical delivery point as Henry Hub, the NBP and TTF show – they are all systems rather than individual points for delivery.

As LNG supply becomes more flexible and less tied to oil indexation, and as markets like Japan liberalise their domestic markets, creating direct price risk between local and international markets for importers, the need to hedge LNG sales and purchases grows.

For portfolio players, a regional benchmark is a good solution because it provides a point of basis price risk for multiple growing markets.

The expectation that an Asian gas hub will emerge is essentially an exercise in pattern building; if they exist in the US and Europe then one will emerge in Asia.

However, that has not been the case in the oil market. The dominant US oil contract is West Texas Intermediate and the dominant international one Brent, while the Asian counterpart, Oman/Dubai, has never seen the emergence of futures trade to the same degree as in the US or Europe, despite many attempts to create such contracts.

LNG trade is arguably more analogous to crude oil trade than it is to pipeline gas trade, as LNG is delivered in large cargoes. It is trade of a large bulk commodity wholesale, rather than the sale of a commodity to end users, just as crude is sold to refiners and other users rather than, for example, car owners.

This along with the overall growth of the LNG market and increased flexibility of supply increases the need for more effective price risk management and it would appear that, for the moment, JKM derivatives are making a strong bid to fulfil that need.