This article is featured in NGW Magazine Volume 2, Issue 14

LNG is becoming a fuel in its own right, rather than a long-distance method of transportation. Better technology will quicken this process, argues Andrei Belyi.

Traditionally seen as a means of transporting methane in a liquid form for its further regasification, LNG may be now used without capital-intensive regasification terminals, thanks to new propulsion technology developed in maritime and road transport, says Andrei Belyi, professor at the University of Eastern Finland. Instead of being liquefied at point A, shipped to point B for regasification and odorising and being pumped into the local gas grid, it is now gaining acceptance as a fuel that exists independent of bulky regasification infrastructure, he told NGW in an interview. It can be regasified at the end-user’s site. The first signs of this technological shift are in bunkering.

There is an emerging LNG supply possibility through the use of standardised (ISO), 40-ft long steel containers for LNG (also called “virtual pipelines”). Containers represent a multi-modal way of delivery as they can be transported by road, sea and rail. They have a capacity of around 15 metric tons and can be distributed to any off-grid region. This is how the island of Madeira receives its gas, for example. 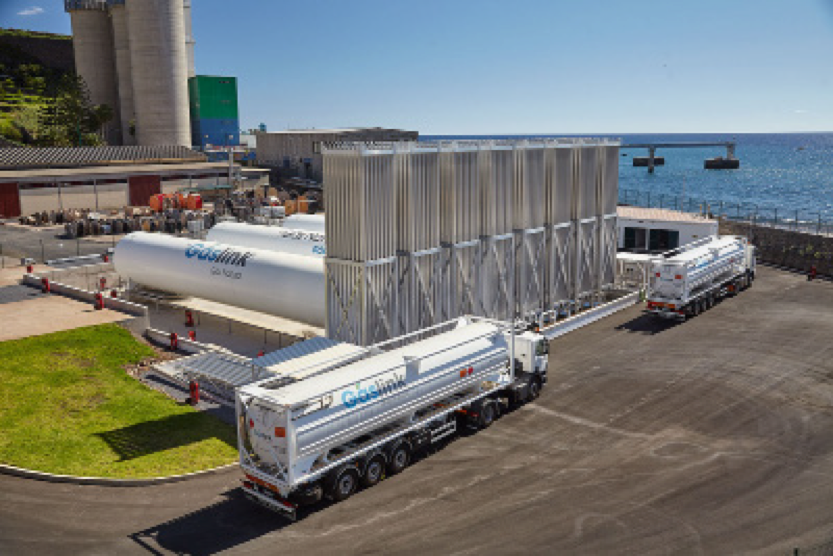 “For me the next incremental gas demand growth will be focused on LNG for maritime and onshore transport. LNG containers push for decentralised delivery models with no regasification and grid injection, but used on the spot by the buyer. I do not know what the demand will be in the next five years but we can see the trend: pipeline deliveries will not disappear while LNG will develop along its own path, becoming a fuel apart. New gas Interconnectors, where trade is low – such as between east European states – may be partially replaced by these virtual pipelines of LNG.

“Of course, pipelines in Europe will remain the largest source of supply and serve a bigger market, but LNG containers could be used instead of building new interconnectors and also go to off-grid regions, while LNG bunkering might provide new supply sources for maritime transport,” he said.

Decentralised modes of LNG supply may emerge in countries unwilling to invest in large scale infrastructure projects. Pakistan for example: why not bring in LNG in containers from either Iran or Turkmenistan? Belyi asks. So far, Pakistan has not got the money for pipelines and a part of the business community would be happier with more expensive containers if they saved on pipelines and regasification plant. Technologies always tend to perform on cost efficiency. Two years ago, containers could only keep natural gas in a liquid state for 50 days, now they can go for 110. Technology is set to overhaul gas trading yet further, as road transfer in cryogenic tanks makes small gas interconnectors redundant.

Market fragmentation is challenging to the international competition in LNG. Qatar, in partnership with ExxonMobil has the capacity to remain the world’s pre-eminent marketer of LNG, while gas trading patterns are also set to change. This, on top of spot trading, would be another way in which the LNG market mimics oil, he said. Nobody can say where the petrol at the pump comes from, physically: it is an amalgamation of refined products from many more sources than the company’s own refineries, which, in turn, refine the crude output from independents as well as their own production.

“Qatar and ExxonMobil have access to some of the cheapest gas in the world: North Field output, which is liquefied in giant trains in Ras Laffan; and US shale gas, liquefied and set to be exported at Golden Pass. This US LNG costs more though by the time it reaches Asia; using swap agreements it could be delivered to Poland instead of Qatari LNG.” Qatar could also buy up LNG from other production, he said, and market it under their brand, just as BP does with diesel and petrol – and has begun to do with LNG, as its deal to buy all the output from the smaller Coral LNG project suggests.

Qatar and Exxon would therefore compete between each other as well as with other companies, such as Total, which is opening up an opportunity in Iran now that the sanctions have been lifted. Iran has no LNG output yet but it has the potential to be prolific, and Total could add this to output from its prominent Yamal LNG project which is due to start this year, he said.

Total has also announced plans to produce gas in Iran and shown interest in further involvement in Qatari gas. At the signing of an agreement to develop a Qatari oil field July 11, Total CEO Patrick Pouyanne said his company was “fully committed to the development of its partnership with Qatar Petroleum both in Qatar and internationally, and is willing to further expand its co-operation in particular with new projects in Qatar.”

“This is the context in which Total, QatarGas and ExxonMobil will organise their chain of suppliers and keep the demand for LNG on an upward path. It would mean the major LNG marketers continuing to aggregate other producers’, provide a ground for international swap agreements and finally breaking the link between the consumer and the source,” he said.

Pipelines, on the other hand, are “part of an older game,” he says. For example, in 1960s many argued that pipelines from Soviet Union to Europe would not prove their economic rationale. However, they delivered most of cheapest gas to Europe throughout the next five decades. Then, the market was only emerging. Now, new large pipelines in Europe are directed to a stagnating/declining market. The Southern Gas Corridor could be uneconomic, depending on the analysis of the cost of it in the short term, but that is not the point: “In the longer term, given declining demand, pipeline gas will not grow any more. We are in an era of stagnation and decline,” he says. Instead, incremental demand seems to be with LNG.

This state of affairs is only going to worsen, thanks to Gazprom’s association with the Nord Stream 2 project at a time when Moscow’s relations with the west are so poor. “NS 2 will only reinforce a perception of Gazprom’s presence in Europe for as long as it retains the export monopoly,” he says. Some proponents of NS2 argue that additional pipeline capacity will allow more gas to compete in Europe.

However, a counter-argument is that it will limit trading in eastern Europe compared with flows through Ukraine; and reinforce long-term bilateral contracts over the trend towards hub-based transactions. Instead, LNG supplies from Russia would provide an added-value for the competition in Europe, bearing in mind LNG exports from Russia are not subject to a monopoly. Also, LNG supplies have no such negative associations, he says, and there is less politicisation of LNG compared with pipeline gas. Hence, Russian (non-Gazprom) LNG supplies will not come under such a politicised scrutiny.

However, Gazprom’s position on NS 2 reveals its inability to develop large-scale LNG plans in the Baltic area. “Companies rarely wish to have Gazprom’s LNG in Europe as they can have its pipeline gas; if they want LNG, it will not come from Gazprom.” A major difficulty for large-scale LNG exports by Gazprom beyond the Baltic Sea is physical: the shallow waters of the Danish/Swedish straits – around 16 metres deep – make it difficult for vessels of 160,000m³ to navigate them. Bringing the LNG to Rotterdam and injecting it into bigger vessels for onward transportation adds to the cost.

Large projects face more headwind because of the gas glut. Most of the incremental demand will occur on a smaller scale. Belyi is cautious about forecasts of LNG demand: Wood Mackenzie believes there will be an oversupply of LNG until the early 2020s, but the glut might well continue. A lot depends on gas demand in Asia, such as how many nuclear plants Japan restarts, what happens to renewables there and how it’s industrial base develops in the coming years.

But the tensions in the Middle East show how vulnerable hydrocarbon’s production is; and the low oil prices could be a much bigger threat to stability than high prices, worsening the economies of countries such as Saudi Arabia. These tensions might turn the glut into a shortage, he says. “Who knows what will happen to production if there is an escalation of conflict? We should avoid predicting anything: a glut, a shortage, or a scenario where the glut ends in 2021.”

This article is featured in NGW Magazine Volume 2, Issue 14