LNG and the decarbonisation of European gas [LNG Condensed]

The EU, following on from a number of countries, including Germany and the Netherlands, in July unveiled its hydrogen strategy. It is now clear that many north European countries and the EU see hydrogen as the best, and most likely only, means of decarbonising particular sectors of the economy within the timeframe laid out by their adoption of 2050 net zero carbon targets.

The key hard-to-decarbonise areas are in industries such as cement, fertilizer, chemicals and steel production and long distance transport, where, in a decarbonised world, renewable hydrogen molecules are needed for the production of base chemicals, feedstocks and fuels, and for high temperature heat.

Notably, in the German strategy, the use of hydrogen for low temperature heat (residential and city gas), most likely achieved by feeding a proportion of hydrogen into the existing natural gas network, attracts less emphasis and is seen as a long-term goal. The focus is first and foremost on decarbonising industry and this is where the first limited volumes of renewable hydrogen are expected to flow.

However, common to all the strategies is a focus on ‘green’ hydrogen – that produced using renewable energy and electrolysis. Green hydrogen, the strategies state, is the only sustainable long-term option.

Since most hydrogen is produced by auto or steam reforming natural gas, or in some cases coal or oil products, and some as a by-product of refinery and petrochemical processes, the adoption of the new hydrogen strategies has significant implications for European natural gas demand and more broadly for the international LNG market, which has seen the continent as a key swing demand centre for the fuel in the last couple of years.

But the raw fact is that current EU natural gas consumption is not easy to reconcile with the 2050 net zero targets. While EU gas consumption has never recovered to its pre-2008/09 financial crisis levels, the EU still consumed 470bn m3 of gas last year, of which a record amount was sourced as LNG.

For Europe as a whole, LNG imports amounted to 120bn m3 in 2019, a massive jump of 68% year on year. However, European gas consumption rose only 1.1%, indicating not that the region increased its gas use substantially to take advantage of low LNG prices, but that LNG displaced pipeline imports.

Over the next 30 years, it looks reasonable to assume that Europe’s ability to act as a sink for surplus LNG will reduce because hydrogen, and other strategies to decarbonise gas use, such as increased biomethane production, imply reduced European natural gas consumption. 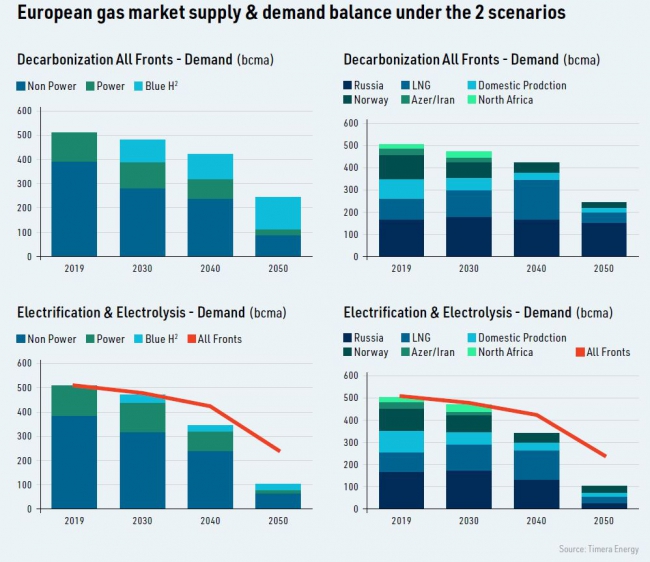 Overall, Europe must be seen as a natural gas market in decline, the timing and extent of which is one of the major uncertainties hovering over the industry.

However, from an import perspective, the decline in overall demand will be tempered by the continued fall in domestic European gas production and an increase in LNG import capacity into the region, most notably in central and eastern Europe (CEE) and Germany, which has yet to build its first LNG import terminals, but has a number of projects planned.

The degree to which Europe consumes LNG over pipeline gas is largely a question of price. Politics, particularly in CEE, also play an important role, as does the flexibility of supply contracts and the degree to which companies trust to spot purchases as opposed to long-term contracts. Given the increased openness and robustness of European gas markets, and the current low price environment that gives buyers the whip hand, supply flexibility is likely to increase further.

As a result of this, new import infrastructure, and declining domestic gas production, LNG’s share of the European gas market may prove relatively robust compared with the market’s overall decline.

The impact of hydrogen on natural gas demand depends critically on how the hydrogen is produced, whether is it ‘grey’ hydrogen from auto or steam reformation of natural gas, ‘blue’ hydrogen which is reformation combined with carbon capture and storage (CCS), ‘green’ hydrogen (renewables plus electrolysis) or ‘turquoise’ hydrogen, which involves molten metal pyrolysis, an experimental technology that produces hydrogen and solid carbon.

As noted, the German, Dutch and EU hydrogen strategies focus on green hydrogen production. The EU, for example, aims to develop 6 GW of electrolysers by 2024 and 40 GW by 2030.

This implies a huge scaling up of electrolyser capacity. The largest PEM (proton-exchange membrane) electrolysis plant under construction is at Shell’s Rheinland refinery in Wesseling, Germany and will have capacity of just 10 MW, producing about 1,300 metric tons (mt)/yr of green hydrogen. A larger project – 20 MW, 3,000 mt/yr hydrogen – is already underway in the Netherlands. Developed by Nouryon and Gasunie, the plant at Delfzijl will use the hydrogen to produce biomethanol, which will then be used in industrial processes. 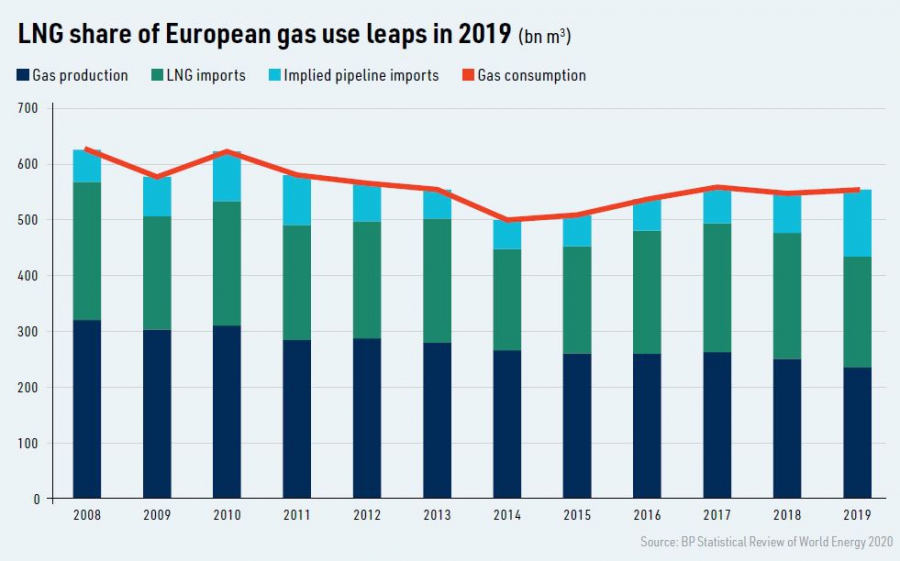 UK company ITM Power, which makes PEM electrolysers and is supplying the Rheinland refinery, is near completion of a new facility in Sheffield, UK, which will be able to manufacture 1 GW/yr of electrolyser capacity. McPhy, another leading electrolyser manufacturer, is also scaling up production and will supply the Delfzijl project, which will receive €11mn ($12.6mn) in EU funding and €5mn from other sources. Both projects are supported by the EU’s Fuel Cells and Hydrogen Joint Undertaking.

Higher volumes, semi automation and improved stack designs and assembly are all expected to lower electrolyser costs. According to the EU’s hydrogen strategy, green hydrogen should be competitive with blue hydrogen by 2030. While green hydrogen production costs fall, grey hydrogen has to undertake the additional costs of CCS in order to become blue.

If there are doubts as to the speed with which electrolyser manufacturing capacity can be scaled up, there are also doubts about the capacity to supply the required renewable electricity. If the latter lags the former, then gas decarbonisation in industry may in part depend on higher gas burn in the electricity sector. This is particularly true given the closure of coal plant across Europe in tandem with nuclear phase outs.

However, blue hydrogen production at scale is also uncertain and depends on the realisation of CCS. The track record of CCS projects in the EU and UK is very poor – to the extent that none of the six large projects which qualified for funding under the European Energy Programme for Recovery (EEPR) between 2008 and 2017 progressed.

The new project models which have emerged now depend on more public/private co-operation, envisaging utility style carbon gathering and distribution networks. This shifts more risk, both in terms of project development and long-term liabilities, on to the public sector. It also makes the success of the projects more dependent on public financing and political opinion.

The new focus on hydrogen, and the implied funding hydrogen technologies will attract, could well take away funds from CCS, which remains a controversial technology in many European countries because of the perception that it will sustain rather than reduce fossil fuel use.

To gain insight into this uncertain future, Timera Energy, which provides consulting services on value and risk in power, gas and LNG markets, has modelled two possible 2050 scenarios implied by the EU and national hydrogen strategies.

One outlines decarbonisation on all fronts in which hydrogen production is ramped up quickly using both steam methane reforming and electrolysis. This is seen as a more technology neutral approach in line with the funding mandates for EU funds such as the EU’s Innovation Fund.

The other is a more targeted policy approach, which focuses on the expansion of renewable energy capacity, electrification and green hydrogen. This focus sees hydrogen production increase more slowly initially, but eventually results in much lower natural gas use post-2040. This scenario is the one most consistent with the announced hydrogen strategies.

Timera argues that the closure of coal and nuclear plants across Europe outpaces the growth of renewables up to 2030. Technological, policy and cost barriers will see only a small amount of gas displacement in industry over the next ten years and efficiency improvements and introduction of heat pumps in residential and commercial heating will take place only gradually.

By 2040, the hydrogen transition is gathering pace, but natural gas demand remains higher in the all-fronts scenario, despite a higher penetration of hydrogen, because of blue hydrogen production.

Significantly by 2040, in the electrolysis scenario, all new investment in hydrogen production flows into electrolysis. In this scenario, blue hydrogen is a transition technology with only some residual production post-2040 from plants built in the 2020s and 2030s.

Predicting the balance between pipeline and LNG use in Europe 20 years hence cannot be done with any great certainty, but up until 2040 at least, the size of the European gas market remains substantial enough to act as an LNG sink in the way that it has done in the last two years.

Over this period, the success or failure of CCS and the expansion (fast or slow) of green hydrogen production and electrolysis capacity, as well as the rate of growth of electricity demand, will be key factors that determine the size of the post-2040 European natural gas market.

What is clear is, first, that the EU’s willingness to head down the hydrogen pathway represents a threat to natural gas demand, but one only likely to be felt in substance post-2040. Second, there is likely to be fierce competition for funding between those that back green and blue hydrogen production.

CCS is too expensive a solution to be transitory and early success over the next decade with green hydrogen – i.e. sharp reductions in costs along the lines of those seen for wind, solar and electric batteries – could see CCS fall by the wayside or simply not progress to sufficient scale beyond a few pilot projects in northern Europe.