Liberalisation of the Brazilian gas market: challenges and opportunities

Over the last 30 years there has been an ongoing discussion in Brazil on how to increase the share of natural gas in the energy mix. This discussion has been guided by the need to improve air quality in large cities, increase the productivity of key industry sectors, and reduce dependence on bottled LPG, widely consumed by households. Additionally, starting in the early 2000’s, there has been an increased requirement for gas-fired power plants, as an insurance against the seasonality of the large and dominant hydro power supply.

Brazil has not been endowed with large gas reserves and therefore the country has had to rely to a large extent on imports from Bolivia, with a 3000 km pipeline commissioned in 1999, followed by three LNG terminals in 2009-2014, all controlled by the incumbent national oil and gas company Petrobras.

The dominance of Petrobras in the supply of natural gas and its main competitor fuels – fuel oil, diesel and LPG - has been a considerable obstacle to the implementation of competition in the supply of natural gas. A Gas Law, enacted in 2009 (Law 11907), had little impact in promoting competition because it did not tackle third party access to essential facilities and did not address the incumbent issue. On the distribution side, the federal states have control of local distribution, and most of them have granted 30-50 years exclusive concession rights to state-controlled companies, with only a few of them allowing for large consumers to choose their gas suppliers. The industrial sector accounts for half of the consumption of gas, and consumers associations complain that a combination of high wholesale gas prices, Petrobras-controlled city gate prices, distribution margins and taxes, weigh heavily on profit margins and are an impediment to increasing demand.

In the power sector, another important potential area of demand, gas-fired power plants are not baseload and are used as back-up to hydro power and increasing renewable installed capacity, mostly wind and solar. Nevertheless, annual power auctions, underpinned by 25-year PPAs and guaranteed fixed revenues, have encouraged the implementation of thermal power plants, but with a maximum dispatch inflexibility of 50 per cent. These provisions have allowed for the development of three new LNG-to-power projects, and currently around 5000 MW are in operation / construction / development, all financed by private investors. 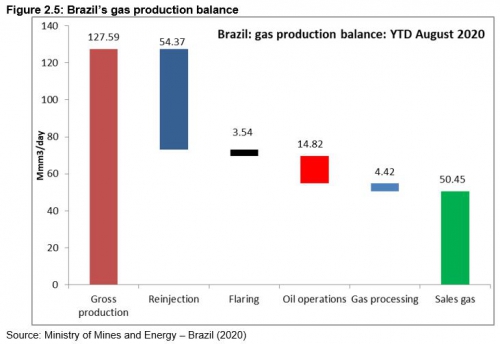 However, the situation was significantly altered by the discovery of large and highly productive offshore pre-salt fields in the late 2000’s which have enabled the production of high-quality oil and large quantities of associated natural gas. As of August 2020, Brazil’s domestic gas production had increased to an average of 127.59 MMm3/day (96.24 MMm3/day in 2015), with 43 per cent (54.37 MMm3/day) being reinjected. This amount of reinjection, almost three times the volumes imported from Bolivia, is caused by a combination of factors: limited upstream pipeline infrastructure, high CO2 content in some fields, and lack of a large and firm demand source to underpin the investment needed to bring associated gas to shore.

In addition, gas consumption has been falling since 2015, due to lower power dispatch and an economic downturn. Despite an economy much larger than Argentina, Brazil’s gas consumption is half that of its neighbour. 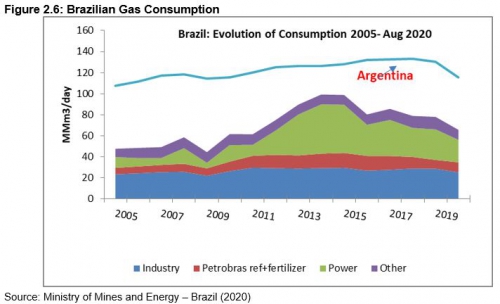 In 2016 the federal government devised a new initiative (Gas for Growth) to revitalise and liberalise the gas market in Brazil, re-baptised as the ‘New Gas Market’ in 2019. The programme was based on a three-pronged approach: i) reduce Petrobras’ dominant position, by directing it to provide third-party access to infrastructure and sell its participation in gas pipelines and distribution companies; ii) amend the tax regime regulating interstate sales of natural gas to base it on contracts, rather than physical flows; and iii) reform the 2009 Gas Law, allowing for negotiated access to essential facilities, moving from concession to authorization for the construction of transmission pipelines, the unbundling of pipeline infrastructure ownership and enhancing regulation for free consumers.

As a result, Petrobras has sold two of its largest pipeline systems to international investors, and is finalizing plans to sell its stake in the Bolivia-Brazil pipeline. It is also selling its controlling stake in the largest gas marketer in Brazil, Gaspetro, which is responsible for supplying most of the gas sold to gas distribution companies.

The Gas Bill was overwhelmingly voted for by the lower Chamber of Deputies in September 2020 but faced considerable opposition with regard to the unbundling provisions. Some sectors of the industry also wanted to enshrine in law the obligation to have baseload gas power plants in the interior of Brazil, with connecting pipelines funded by the government. In December 2020 the Senate added a few amendments in this regard, forcing the Bill to be sent back to the Chamber of Deputies. If the Chamber rejects these amendments, then the new Law can be enacted in the first half of 2021.

In conclusion, the success or otherwise of the Gas Bill is poised to impact on the growth of gas demand in Brazil, with the potential to create another 24 MMm3/day of industrial demand by 2029 and another wave of private investment in M&A, new pipelines and other LNG business models. If there is more incentive to divert associated gas from reinjection into demand centres, this is also likely to impact the dynamics of gas imported from Bolivia into Brazil. As such, 2021 could be a very important year for the Brazilian gas sector and we will be watching progress carefully.

Originally published in the Quarterly Gas Review by Oxford Institute for Energy Studies.