In late November, Lebanon’s ministry of energy and water announced the launch of the country’s second offshore licensing round, returning to an auction that was approved in April 2019.

The original bidding deadline was pushed back from January 31, 2020, first to April 30 and then June 1 that year as the impact of the coronavirus pandemic and the corollary plunge in oil and gas prices took hold. The Lebanese Petroleum Authority (LPA) then said it would seek to complete the bid round by the end of 2021, but this too was missed.

The LPA has now relaunched the licensing effort, setting a deadline for receiving bids of June 15, 2022.

Representatives made an unexpected appearance at the PETEX conference in London to promote the round, presenting information about the blocks on offer and providing an update on terms.

Lebanon’s exclusive economic zone (EEZ) is delineated into 10 concession areas with Blocks 4 and 9 held by a consortium of TotalEnergies (40%), Eni (40%) and Russia’s Novatek (20%), following their award in the first licensing round in 2018. 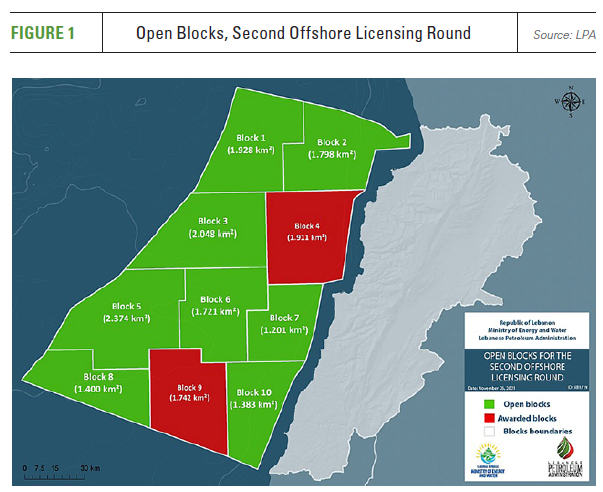 Aside from the timing, the most notable difference in the LPA’s approach to the latest auction is that all eight open blocks are included in the auction. Blocks 1,2, 5, 8 and 10 were all included when the round was announced in 2019, and now blocks 3 and 6 have been added.

Speaking to NGW, Wissam Chbat, head of the LPA’s geology & geophysics department says that the rationale for including these blocks “is to offer flexibility in the geographic acreage location, reducing geopolitical risk, and the variety in the geologic play types offshore Lebanon following the results of the well in Block 4”.

He adds that the LPA intended to align “the strategic energy transition shifts within major oil and gas companies towards more gas investment and less oil investment. Blocks 3, 5 and 6 offer more exposure to the deep part of the basin with higher probability to strike gas”.

Meanwhile, the LPA’s presentation outlined that the winning bidders would be afforded a one-year term to ‘drill or drop’, while offering improved flexibility on local content requirements in the pre-discovery phase.

Keen to drum up as much interest as possible, the LPA has set a ‘retrieval’ fee of just $5,000 to access the licensing round application and seismic and other data.

With 51 companies adjudged to have met the qualification criteria for the first round, and BP, Gazprom, Lukoil and Repsol all reported to have made visits to Beirut in the run up to the previous round-two bidding deadline, Beirut will be optimistic it can attract significant interest.

3D seismic is available for around 80% of the unlicensed areas. It was shot during an early-2010s multi-client survey carried out by PGS, TGS-NOPEC Geophysical and Spectrum, with only the northernmost, southernmost and north-eastern areas of the EEZ left out.

According to PGS: “Several potential play types have been defined, including elongated 4-way closing sub-salt structures with Miocene sandstone reservoirs of distant Nile Delta sediments and stratigraphic traps. The Levant Margin to the east of the survey is known to consist of oil-prone Mesozoic carbonate reef plays.” This is expanded on by TGS, which suggests that Lebanon could become “the East Mediterranean’s oil capital”.

Meanwhile, an onshore/offshore basin study carried out by NEOS GeoSolutions in 2016 “supported the presence of significant potential for discovery of hydrocarbons in Lebanon in the Triassic [layer]. Triassic and Paleozoic thermal analysis indicated wet gas transitioning to dry gas probable with some liquids possible”.

The TotalEnergies-led consortium completed its first well 30 km north of Beirut in the 1,911-km2 Block 4 in April 2020 and noted that while “traces of gas were observed confirming the presence of a hydrocarbon system” no commercial discovery was made.

Roughly 8% of the consortium’s Block 9 concession overlaps with an 890 km2 triangle of territory disputed by Israel, and the partners have said they plan to drill as far from the zone of contention as possible.

The southern concessions are seen being primarily gas-prone, with northern areas seen yielding oil. Previous estimates have suggested that the northern Block 1 may hold P50 oil and gas resources of 440mn barrels and 14.9 trillion ft3 respectively, while Block 4 could hold 425mn barrels and 13 trillion m3 and Block 9 15.2 trillion m3. Block 10 (1,383 km3) also lies in the south.

In 2020, Lebanon and Israel agreed to US- and UN-mediated talks to find a resolution to establish a maritime boundary line for the first time, but these quickly stalled as the Lebanese negotiators submitted a revised approach to the current ‘Hof Line’, prepared following a survey of the southern coastline to Ras El Naqoura. This reaffirmed the land border points drawn up by the Paulet-Newcombe border line agreement in 1923 and stated that the maritime border must match this onshore designation.

Another major influence on the maritime line is the rock of Tekhelet – 1.8 km to the south of Ras El Naqoura – which alters the maritime zone by 1,800 km2, though its disproportionate impact is likely to be considered as unjustifiable by the International Court of Justice (ICJ) and the International Tribunal for the Law of the Sea (ITLOS). The southernmost of the lines would split Israel’s Karish gas field between the two countries, leading to “very heated” exchanges according to local media. However, the argument for ignoring the effect of islets leading to disproportionate effect was strengthened in the recent October ruling between Somalia and Kenya.

In October, US mediator Amos Hochstein said he hoped that the talks could be revived and hoped that a resolution could be found swiftly. He told Lebanon’s Al Hadath TV: “I think that in these kinds of efforts what we’ve learned is that if you take a lot of time, it doesn’t happen. So, we need to be focused and we need to move quickly.”

With Lebanon having faced years of political instability, Beirut has sought to establish transparent resource governance practices and tendering processes, highlighted by the level of detail freely available on the LPA’s website.

This has been driven in part by the Lebanese Oil and Gas Initiative (LOGI), an NGO that aims to provide a platform to lobby the country’s lawmakers and to avoid the resource curse.

LOGI advocated for the improved transparency in the Petroleum Sector law, which was ratified by the parliament in September 2018 and requires the LPA and other bodies to make quarterly publications or disclosures about developments in the oil and gas sector.

While Lebanon is yet to benefit from the riches that hydrocarbons development can provide, unlike many more developed oil and gas markets, it has developed a framework through which, at least theoretically, it can avoid some of the same pitfalls.