Monitoring satellite technology is already mature enough to deliver significant cuts to methane emissions from the energy sector, co-founder and chief analyst of data analytics group Kayrros, Antoine Halff, says in an interview with NGW. Rather than wait for further technological progress, he called for action to address these emissions now, given their significant contribution to climate change. 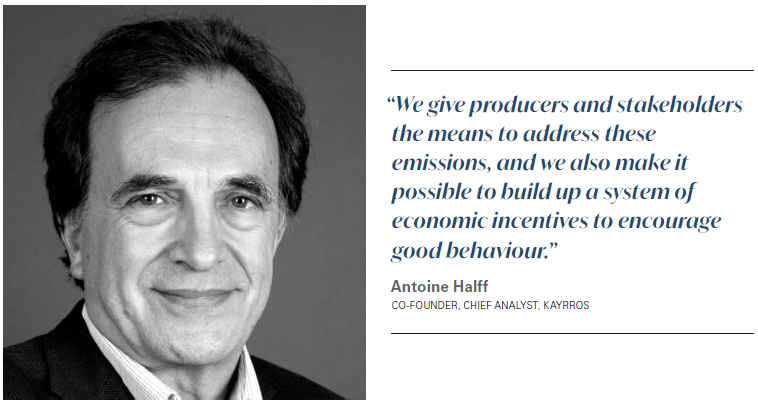 Kayrros has built a platform to automatically detect large concentrations of methane emissions around the world, using satellite imagery that is processed with artificial intelligence and complex modelling. It primarily uses data from the Copernicus Sentinel-5P satellite of the European Space Agency, marrying that with data from other satellites that is both publicly and commercially available. Kayrros’ customers – whether governments, multilateral organisations, commodities traders, the gas companies themselves or their investors – can then use this data in their decision-making and  in communications, to document progress towards climate targets.

The major methane plumes from energy infrastructure are often intermittent rather than continuous, but because of their high emission rates, they still cause significant damage to the climate.

“This is the value of our platform – it provides continuous observations of the planet, and that’s really key to addressing the intermittency of these large emissions,” Halff says. “In order to assess the emissions footprint of a production asset of a company, or a country, it’s essential to have this continuous monitoring. You can’t fix something that you can’t measure.”

At the same time, whereas addressing smaller leaks can be complicated and cost-intensive, while resulting in only small reductions, dealing with these larger leaks can yield substantial climate benefits, Halff says.

“We give producers and stakeholders the means to address these emissions, and we also make it possible to build up a system of economic incentives to encourage good behaviour,” he continued. “Once you can monitor their footprint, you can reward producers for good performance.”

Increasingly, natural gas suppliers are measuring the greenhouse gases (GHGs) associated with their products in the hope of fetching premium prices for cleaner gas. But a standardised system for monitoring, reporting and verifying the GHG emissions is not yet in place.

Kayrros has identified large methane plumes at energy infrastructure across the world, from North America to the former Soviet Union, the Middle East, Australia and China. Halff sees good operating practices as key to avoiding these leaks.

“What is very striking is that geology is not really the explanation,” he says. “We see operators that work side by side with very similar geologies but very different emission profiles.”

For example Saudi Arabia, the largest crude oil exporter in the world, produces very few emissions, Halff noted, while neighbouring Iraq has much higher emissions. Likewise individual operators working next to each other in the US Permian basin can have very different emissions profiles.

“It’s all about the operating practices, and sometimes the regulatory environment,” Halff says, noting that regulation in Saudi Arabia discourages flaring and methane venting.

Kayrros witnessed a reduction in methane emissions in 2020. While this was partly a result of the pandemic and its impact on production levels, in some countries such as the US, methane intensity has fallen as producers have taken steps to reduce their emissions. The same cannot be says for Russia, where there were more plumes detected in 2020 than in the last year. Kayrros identified several more large plumes from pipelines belonging to Russia’s state gas supplier Gazprom this summer.

Estimates for energy-sector methane emissions that are developed using top-down satellite data are often significantly higher than the data that companies produce themselves using bottom-up methods, such as cameras and other leak detection methods on the ground.

“The main discrepancy here is that many bottom-up estimates are established using emission factors,” Halff says. “These emission factors tend to be outdated or don’t take into account the intermittency of emissions, or maintenance operations, accidents that can happen, faulty equipment that may not function properly and inefficient flares.”

There has been an explosion in methane detection technologies used in the oil and gas industry, from drones and aerial surveys to various improved ground monitors, either stationary or mounted on vehicles.

“The problem with these technologies is that once again they miss the intermittent emissions,” Halff says. “So you can conduct a test on the field once a month and give it a clean bill of health, when in fact the big releases happen in between the periods of time when you conduct the surveys.”

Satellites are also key to measure the footprint of non-operated assets, in countries where flying drones or setting up ground sensors might not be readily available, Halff says. These types of joint-venture assets can be high-emitting but are typically left out by companies in their methane reporting, as they do not control operations on the ground.

Halff acknowledges some of the limitations of satellite technology – it has difficulty tracking emissions near the equator and offshore for example. But he says he is confident that ongoing research will overcome these shortcomings. Asked whether satellite data might overestimate emissions, he explains that satellite monitoring technologies are based on “robust, peer-reviewed, fully-vetted science,” adding that whenever it has been possible to cross-reference satellite detections with other types of measurements, the comparison have consistently validated the former.

Because so many satellite detections simply cannot be replicated by other means, however, it is “theoretically possible” to question their accuracy, he concedes, while stressing that any concrete evidence of overstatement has yet to be provided.

“In the absence of facts, invoking this theoretical possibility could sound like a kind of cop-out if not straight-out denial,” he says. ‘But this only serves to emphasise the need for a candid, genuine effort at reconciling bottom-up and top-down estimates.”

Ready for the task

Halff concludes that satellite technology, while always improving, is ready for the task of tackling methane emissions now.

“Current monitoring satellite technology is already sufficiently mature and sophisticated to unlock massive reductions that we desperately need to buy ourselves carbon space to work out longer-term solutions to the climate crisis such as direct air capture, green hydrogen or the electrification of the car fleet,” Halff explains. “Our current technology allows us to track hundreds of hotspots or super emitters that could easily be addressed, and to do so in the near real-time. Each one of these releases is a low-hanging fruit.”

“While we may not have 100% visibility on all leaks just yet, that is no reason to hold up our abatement efforts,” he continues. “The transparency provided by monitoring satellite technology is more than sufficient to guide and accelerate abatement efforts, to do so at a negligible cost, and as a result, bend the climate curve and score the first big victory for the planet since the dawn of the industrial age.”

Halff argues that “to wait for the next generation of satellites or the perfect regulatory framework is just a form of denial and procrastination.”

“There is no need to wait, we have more than enough information to act now. Nor do we have – at the current rate of global warming – the luxury to wait,” he says. “Methane emissions are the second largest cause of global warming and keep rising. Trustworthy abatement requires constant monitoring”

By tackling its methane emissions, Halff says the energy industry could “gain public trust and prove that it can be part of the solution, and to back it up with verifiable data that the public can trust.”