US federal regulatory approval for the proposed 7.5mn mt/yr Jordan Cove LNG project in Oregon, on the west coast, comes at a challenging time for the industry – both in the country and beyond.

Demand has fallen sharply almost everywhere as industrial activity slows in response to the coronavirus (Covid-19) pandemic. This downturn is worsening the glut, which had been in evidence even before the health crisis.

The boom in new liquefaction capacity and – most recently – a mild winter came on top of a gradual slow-down among the major economies.

As of late March, many countries remain in lockdown for at least the coming weeks, while some buyers have started cancelling contracted cargoes of LNG. As a result, the near future looks challenging for both existing US exporters and those – including Jordan Cove operator Pembina Pipeline – that are proposing new liquefaction terminals.

While the timing of Jordan Cove LNG’s approval by the US Federal Energy Regulatory Commission (Ferc) can be seen as unfortunate, given broader market dynamics, the project has already defied expectations by having advanced this far. Ferc had rejected the application to build Jordan Cove as long ago as 2016, marking the first time the regulator had denied authorisation to a proposed LNG terminal. 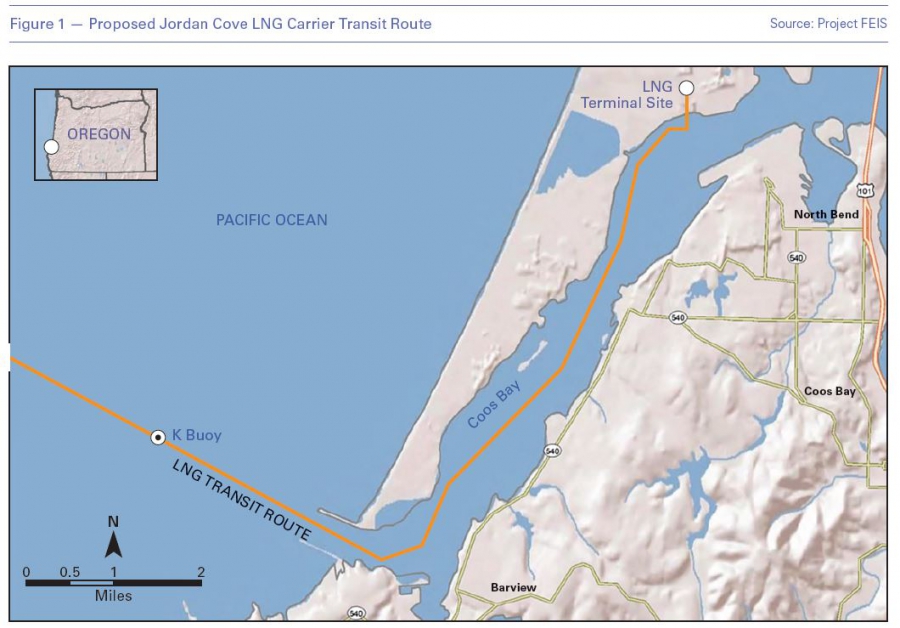 At the time both the applications for the terminal itself and the Pacific Connector pipeline, which would serve it, were rejected. The Ferc said that the submission did not contain sufficient evidence of need for the pipeline, nor did it outweigh the potential for adverse impacts on landowners and communities along its route.

The agency thus denied the certificate to construct the pipeline, which led it in turn to reject the application to build the Jordan Cove terminal. The facility was now without a supply source, the Ferc said, and therefore could provide no benefits to offset the impact of construction.

This rejection led to speculation at the time that Jordan Cove LNG was effectively dead. However, the project gained a new lease on life, with former operator Veresen reapplying to build the project after signing new agreements it said proved the need for Jordan Cove to be built.

Jordan Cove’s chances of proceeding improved further when Veresen was taken over by Canada’s Pembina in October 2017. The Canadian company was better placed than Veresen to finance Jordan Cove, and by this time Donald Trump had become the president of the US. Among his pledges was that his administration would expedite regulatory approvals for major energy projects.

Several state permits are still required in order to start construction work on the terminal, and some of these have previously been denied. Oregon’s governor Kate Brown has warned that the project cannot move forward unless it obtains all of the outstanding state permits. On top of this, collapsing demand for LNG globally, coupled with an ever-growing supply glut, makes it increasingly unlikely that final investment decisions (FIDs) will be taken on new liquefaction capacity in the foreseeable future.

Pembina was unavailable to comment to NGW on the likelihood of proceeding with the project. However, in a March 19 press release, the company described the Ferc approval for Jordan Cove as “the most significant step forward for Jordan Cove since Pembina acquired the project.”

The market downturn does not only bode badly for developers of new LNG capacity, but also for existing LNG producers. News of cargo cancellations have started to emerge, and this trend is set to continue. Excess volumes have been going to the spot market, but this will become increasingly challenging as storage fills up while demand remains low.

As BG’s Frank Chapman liked to point out, justifying its liquefaction capacity in Chile, all the world’s other importers are in the northern hemisphere, so there is no natural seasonal modulation.

Producers in the US stand to be particularly affected by this given the nature of their contracts and how they differ from traditional LNG contracts.

“If you're somebody who’s looking at an Australian cargo, like a legacy traditional DES [delivered ex-ship] deal, then you would have to pay everything if you cancel that cargo. So it’s take or pay,” Poten & Partners’ head of business intelligence, Jason Feer, told NGW. “With US contracts, you would still have to pay the liquefaction fee or the tolling charge but you’re free of the rest. Someone else has to worry about the gas and it’s your ship,” he added. “As long as everybody plays by the rules, the US can be flexibly shut off and turned back on.”

However, this leads to the question of where to redirect cancelled cargoes – and how this could soon force LNG producers to put the brakes on output.

“Because it was such a warm winter, there's a lot of volume around,” Feer said. Tanks are filling up, including in regions where large drawdowns are normally expected, and in countries where storage has not traditionally been filled as much. “Since the beginning of the year, there's been this huge surge of LNG being poured into Europe,” Feer said. “[Producers] were producing LNG that was supposed to go to consumers over the winter, and it didn’t. And so, Europe’s your market of last resort, and people have pushed it all there to solve a short-term problem.”

However, this will result in European storage being filled up faster – Feer estimates that by June or July, storage on the continent could be full, compared with September or October last year. Meanwhile, cargo cancellations have started but have not been plentiful, suggesting that more could be coming in the next few months as spare storage capacity shrinks. In the case of US cargoes, cancellations typically require 60 days’ notice, and more cancellations will put additional pressure on producers.

“It looks like something will have to give somewhere,” said Feer. “There will have to be a supply response somehow. So you would assume that would be in the US because contractually, structurally that’s the easiest thing to do.”

Indeed, a day after Feer spoke to NGW, reports emerged that Cheniere Energy, the US’ largest producer of LNG, had tendered to buy six cargoes of the fuel for delivery to Europe later this year. Further details have yet to emerge, but there is speculation that the company is either testing the market as it considers cutting output, or that procuring these cargoes is cheaper than producing and shipping its own LNG.

Whilst existing suppliers weigh up whether to cut production, paralysis is likely to set in for proposed, yet-to-be sanctioned liquefaction terminals.

North of Jordan Cove’s location on the Oregon coast, in BC’s Howe Sound, Woodfibre LNG has already announced a one-year delay to FID and construction start on its 2.1mn mt/yr project, citing in part Covid-19 impacts on fabrication yards in China.

And in late March, Australia’s Woodside Energy delayed FID on a number of its pending projects, including the offshore Scarborough and Browse gas developments and Train 2 of its Pluto LNG project.

“I don't think people are going to pull funding for projects in FID because all that does is make the bank the owner of a half-finished LNG project,” said Feer. “But in terms of new business, I think there’s just no incentive to do anything. So I think everything’s just going to grind to a halt until people get a better feel for what normal is.”

This suggests that Jordan Cove LNG is among the projects that could now be delayed, if not scrapped altogether. However, it cannot yet be ruled out that Pembina may be eyeing the project’s longer-term potential. The company has already been talking up the competitive advantage that comes from positioning the plant within easier reach of Asia than the Gulf Coast terminals.

Once global demand is outpacing supply again, this could play in the facility’s favour if it is still on the table. However, regulatory hurdles at the state level still need to be overcome, and a more balanced market is thought to be at least a few years away.