Japan’s recent revision to its Strategic Energy Plan (SEP) lowers the targeted share of liquefied natural gas (LNG) in the country’s power generation mix in 2030 to 20% from 27% previously, as a measure to cut emissions. A Rystad Energy analysis concludes that Japan’s targets are too ambitious to meet and that the changes the new plan will bring will mostly be in the structure of commodities trading.

Before Japan outlined its sixth SEP, Rystad Energy already considered the earlier 27% target an underestimation, as we expect the country’s LNG reliance to be higher in 2030. Our analysis shows that the new 20% target may somewhat reduce the share of LNG in the energy mix compared to what we previously expected – but we do not believe that the share will drop lower than 27%.

In absolute terms, Rystad Energy calculates that if the sixth SEP’s targets were to be realized, Japan’s LNG demand in 2030 would be cut by 18mn metric tons/year from our previous estimate of 66mn mt/yr. In our base case, however, the country’s revised plan is only likely to remove 4.6mn mt/yr of demand in 2030, bringing total LNG demand to 61.4mn mt/yr, with the entire reduction coming from the power sector.

The reason our analysis concludes that Japan will fail to meet its new LNG target share is that the plan overestimates the potential contribution of renewables and nuclear in its power generation.

The new plan’s proposed 20-22% share for nuclear power will require upwards of 25 GW of nuclear capacity to become available. This represents a re-start for several, if not all, inactive reactors, on top of the currently operational 10 GW nuclear capacity in Japan. The required capacity is a daunting prospect given the widespread local opposition and safety concerns around nuclear power. Renewables might also be difficult to deploy as Japan’s small proportion of flat land area (30%) would constrain solar capacity, and the surrounding deep and turbulent seas would limit economically viable offshore wind capacity. 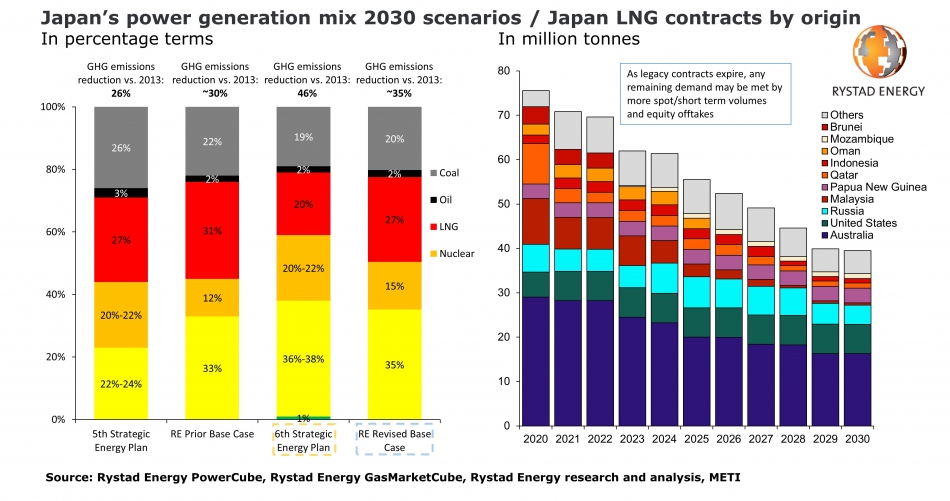 “Even if it is unrealistic, the challenging LNG import reduction target may bring uncertainty to Japanese companies. Legacy contracts will expire in the coming years and could end up being replaced by spot and short-term purchases,” says Kaushal Ramesh, gas and LNG analyst at Rystad Energy.

Companies with short positions will be tested during periods of extreme weather and high-power demand and will have to buy from an increasingly volatile spot market, which might intensify price seasonality in the region. Those with long positions may operate as portfolio players and on-sell volumes to other regions, Ramesh adds.

Irrespective of its final size, Japan’s demand reduction may affect multiple producers, but disproportionately impact some Asia-Pacific basin players such as Brunei and Papua New Guinea that have historically leaned on Japan for LNG revenues. While producers have enjoyed exceptional stability and operational performance from Japanese importers, China is broadly expected to absorb some of the LNG volume growth lined up for the market.

Like we expect in Europe, producers looking to supply Japan’s remaining LNG demand in the years ahead will likely have to demonstrate strong emissions credentials (such as by supplying carbon-neutral LNG) on top of higher flexibility and lower costs. This could put some emission-intensive projects in Australia (Ichthys, Barossa, Prelude) on the back foot, while volumes out of US and Russia could face scrutiny over upstream flaring and venting.

Before Japan’s recent revision, Rystad Energy estimated the global LNG supply deficit in 2030 at 104mn mt. Based on currently operational and under-construction LNG projects, Japan’s realistic LNG demand reduction of 4.6mn mt/yr in 2030 is only a small trimming to the expected deficit and therefore will only have a limited market impact.

In an era when projects are struggling to progress due to construction delays, financing delays or environmental concerns, the accelerated energy transition could disproportionally impact the supply side by discouraging investment, and high prices and volatility could continue even if demand falls.

Sasol sees gas as part of the energy transition