Japan’s revisions to its sixth Strategic Energy Plan envisage that gas will account for only 20% of 935 TWh of projected electricity generation in 2030 (Figure 1). This compares with the previous target for gas-fired generation of 1,065 TWh, equivalent to a 27% share. The new proposals put coal-fired generation in 2030 at 19%, oil at 2%, nuclear at 20-22% and renewables at 36-38%.

However, achieving the targeted reductions in gas use will prove very difficult. 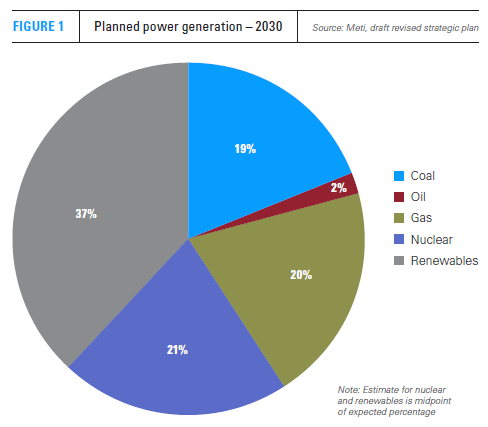 Japanese energy demand has been falling steadily for more than a decade, largely as a result of economic restructuring and more efficient energy use. According to BP’s Statistical Review of World Energy, total primary energy consumption fell by almost a fifth between 2010 and 2020, when demand totalled 17.03 EJ.

The COVID-19 pandemic accentuated these trends. Total primary energy demand was 7.5% lower in 2020 than 2019, while CO2 emissions fell by 8.4% year/year. Consumption of all types of energy apart from hydroelectric power and other renewables fell.

About two-thirds of Japanese gas is used in the power generation sector. Almost 354 TWh of power was generated from gas in 2020, 2.8% lower than in 2019, with the fall being about the same as for electricity generation as a whole (Figure 2). Increased renewable energy production did make inroads, but this was offset by the need to compensate for a sharp fall in nuclear generation. 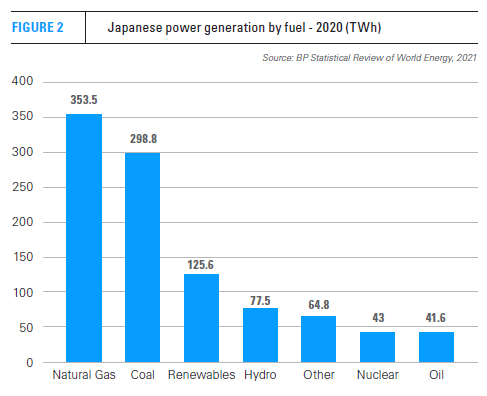 Statistics issued by the Institute of Energy Economics Japan (IEEJ) show a marked increase in LNG use for power generation during the period from July 2020 to March 2021. Gas burn during the nine-month period totalled 38.3mn mt in large part because of ailing nuclear output.

At 35.2%, gas’s share of Japanese generation in 2020 was much higher than in those Asian countries where power systems are dominated by coal. For instance, Chinese gas-fired plants accounted for only 3.2% of national electricity output, while Indian gas-based plants produced 4.5% of the total.

Given Japan’s very limited indigenous gas output and lack of piped imports, it is unsurprising that LNG imports tracked the change in gas consumption. Imports in 2020 of 102bn m3 – equivalent to 74.4mn mt – were 3.6% down yr/yr.

Japanese LNG imports were also well down as a proportion of both Asian and global LNG trade in 2020. The country accounted for almost half of Asia-Pacific and a third of global imports in 2015, but only 29.5% and 20.9% of the respective totals in 2020.

The strategic plan’s expectation that gas use and LNG imports will fall is in line with trends over the past decade. But the extent of the projected fall is much greater than in the 2010s, especially in the electricity sector. The fall in gas use is intended to help achieve a 46% reduction in greenhouse gas emissions from 2013 levels by 2030.

The plan envisages that gas-fired generation will about halve to 187 TWh by 2030, with the fall being offset largely by higher nuclear and renewable output.

However, the projected growth in the nuclear share to 20-22% of total electricity output is regarded as unrealistic by many analysts. Nuclear reactors accounted for only 4% of electricity generation in 2020. To reach 20-22% in 2030, almost all of Japan’s 27 extant reactors would have to return to operation, according to the Tokyo-based Renewable Energy Institute (REI). Only 10 reactors have resumed operation since the Fukushima nuclear accident in 2011.

The REI also noted that achieving the plan target would require the 27 reactors to operate at a “capacity factor of 80%...compared with an average of 67.8% in the 10 years prior to the nuclear accident.” It further observed that “the 27 reactors include eight reactors that will not be able to operate in 2030 without a new licence extension for 60-year operation.”

“The 20-22% target is extremely difficult to achieve and is likely to fall far short of the reality,” the Institute concluded.

The REI also criticised the plan’s proposal that the 2030 power mix would include 19% of coal-fired generation. While generating electricity from coal could prove less politically challenging than reviving the nuclear fleet, the Institute observed that "the continued use of coal-fired power, casts doubt on the seriousness of Japan's commitment to avoiding a climate crisis.” 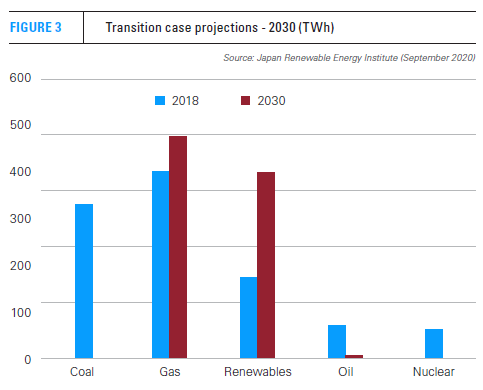 The REI also disagreed with the plan’s 36-38% target for renewables-based electricity output in 2030, arguing that this was below the technically and economically feasible level. Based on an analysis it published in September 2020, the institute said renewables’ share of the 2030 electricity mix could reach 45% (Figure 3).

The REI’s analysis was predicated on efficiency savings and other measures reducing electricity demand in 2030 to 850 TWh. It also assumed that coal and nuclear generation would be phased out completely by 2030. And, in marked contrast to the government’s plan, it envisaged that most non-renewable-based power needs would be met by 480 TWh of gas-fired output.

Other analysts agree that the strategic plan’s proposed reduction of power sector gas use to 20% of total output by 2030 is unrealistic. A study undertaken by Rystad Energy concluded that gas-fired generation would be unlikely to fall below 27% of total output in 2030.

In common with the REI, Rystad expressed scepticism about the plan’s expectations for nuclear generation. It noted that resuming operation of at least 15 more reactors by 2030 would be highly problematic given the local opposition to many reactor restarts.

However, Rystad disagreed with the REI about how much renewable capacity might be installed by 2030. It noted that renewable output would be constrained by the limited availability of land suitable for solar installations. It added that marine conditions around the Japanese coast would have an adverse impact on how much economically-viable offshore wind capacity could be built.

Consultants Wood Mackenzie has also expressed scepticism about the strategic plan’s renewable target. It said in late July that “our current outlook for [Japanese] renewables is a 30% share by 2030, so the proposed 36% renewables share is a stretch. It can only be possible with additional government support.”

Wood Mackenzie was sceptical about the plan’s nuclear output target, and thus about the likelihood that the proposed reduction in fossil-fired generation to 41% of total output could occur.

If gas-fired generation were to fall to 187 TWh in 2030, LNG demand from the power sector could halve to about 23mn mt, compared with 47.1mn mt in the year to March 2021. But the difficulty of achieving the planned increases in renewable and nuclear output mean this worst-case scenario for Japanese gas burn and LNG demand is unlikely to happen.

Many analysts do anticipate a cut in demand, albeit a less serious one. Based on a fall in gas-fired generation to 27% of total output, Rystad estimated that overall LNG imports could fall by 4.6mn mt from its previous estimate of 66mn mt to reach 61.4mn mt in 2030.

This is still significantly lower than current levels and could have consequences, for instance in relation to the amount of Japanese LNG bought under long-term contract or to the level of Japanese investment in overseas LNG production projects. But in a context where Japan’s share of global and regional LNG supply is falling, it would not throw the international market into disarray.

There is no certainty that gas-fired generation will fall to the extent envisaged by the plan, and in some circumstances it could even grow. This could occur if coal-fired generation were to take a greater hit – perhaps a more logical choice given the coal chain’s typically greater contribution to GHG emissions than gas.

This is the route championed by REI, which proposes a generation mix comprising only renewables and gas, which would require the latter to produce 480 TWh in 2030. Depending on generating plant efficiency, this would require about 60mn mt of LNG for the power sector alone in that year.

In these circumstances the overall LNG import requirement could in fact be higher than at present. If city gas use were to remain relatively stable, total Japanese LNG demand in 2030 could be in the region of 90 million mt.