Japan may be overreaching on 2030 gas targets [Gas in Transition]

While Japan’s plans to reduce LNG in its power mix have made headlines, the longer-lasting implications of such targets on the wider gas market may be relatively mild.

The Ministry of Economy, Trade and Industry (METI) published its draft sixth strategic energy plan in July and the headline figure for gas market watchers was the government’s goal of reducing the share of LNG in the power mix (Figure 1) from 37% in financial year 2019-20 to 20% by 2030-31. 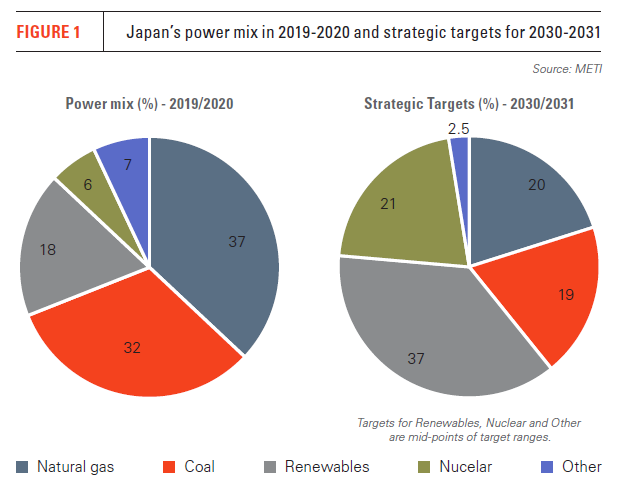 The draft serves as the government’s roadmap towards delivering on its October 2020 pledge to achieve net zero carbon emissions by 2050.

The nearly halving of LNG’s share of the power mix is eye catching, but represents a continuation of government efforts to reduce the country’s dependency on foreign energy supplies. Moreover, while growing demand from buyers throughout the region is likely to absorb any lost Japanese demand, market observers speculate that Tokyo’s goals may be unachievable in the first place.

The country turned to LNG after it mothballed all 54 of its reactors in the aftermath of the nuclear disaster. Since then, the country has brought nine units back online leading to a slide in LNG demand. Imports totalled just 74.5mn metric tons in 2020, down from the 77.3mn mt of LNG imported in 2019 and far short of the record 88.51mn mt of imports recorded in 2014. As such, the government is understandably banking on further restarts to help drive imports even lower.

Whether the country can bring enough nuclear capacity back online to reach Tokyo’s 2030 target is a matter for debate, however, with industry watchers arguing that heightened safety regulations and stiff public opposition could derail efforts.

Wood Mackenzie principal analyst Lucy Cullen told NGW that it was “highly debatable” whether the government could hit its targets.

She added: “Over-optimism on targets, particularly for nuclear, could undermine the government’s ability to reduce the fossil fuel share of the mix, in turn reducing the downside risk to LNG demand.”

Wood Mackenzie estimates that successfully reaching the targets would represent an up to 10mn-mt decline in the country’s LNG demand compared with the previous target.

Rystad Energy’s vice president of gas and power markets, Xi Nan, was similarly cautious about the country’s chances of delivering on its nuclear power targets. She told NGW that only 5mn mt of demand could realistically be taken off the market in 2030, representing a 15mn-mt decline compared with 2020 levels.

She added: “We think the plan is challenging to implement, given widespread opposition to nuclear power and the very aggressive renewables targets.”

Regardless of whether the government reaches its target, however, the amount of lost demand is unlikely to weigh overly on LNG prices, given other regional buyers are expected to absorb the volumes.

Japan’s hydrocarbon demand has been in decline for a number of years, driven by an ageing demographic and a government-driven energy efficiency agenda. The same is not true for most of the rest of the region, however, with demand from China, India and emerging South and Southeast Asian economies expected to grow rapidly.

New import capacity is being built across the region as governments seek to feed projected robust economic growth while curbing their countries’ carbon emissions.

Cullen noted: “Downside risk to long-term Japanese LNG demand is not a new story for LNG project developers. And risks associated with energy transition will already be factored into project development decisions.”

If anything, shifting supply trends rather than demand side changes could lead to price volatility later this decade. While only 3mn mt/year of new capacity was sanctioned in 2020, this followed the record breaking 71mn mt/yr that reached a final investment decision (FID) in 2019. Moreover, 45mn mt/yr has also been approved so far this year.

Cullen said: “This new capacity will bring a new wave of supply to the global market from the latter half of the 2020s, driving the next price cycle.”

Echoing this sentiment, Nan said: “If another wave of projects is sanctioned in 2022-2023, we see some downside risk to prices around 2027 onwards that may trigger more consumption in price sensitive regions like India and Southeast Asia.”

Japan’s new targets may have highlighted a fresh urgency in the country’s energy planners to drive down the country’s carbon emissions, but the country will need dispatchable power in the years ahead as it builds out its renewable and nuclear capacities.

Nan said reducing gas’ share of the power mix beyond the already “aggressive” target of 20% would require a step change in battery storage or other renewables deployment, while adding that technologies such as carbon capture and storage could allow gas to contribute to the power mix even amid a wider push towards net zero by 2050.

Renewables are set to continue expanding their market share, but maintaining grid security will remain a priority for energy planners anxious to avoid potential blackouts.