Some of Japan’s biggest energy players are exploring novel ways to decarbonise natural gas with the support of the central government in Tokyo, as the major LNG importer looks to ensure stable energy supplies while meeting its 2050 carbon neutrality target.

The two major initiatives underway in Japan – which imported 37.54mn metric tons of LNG in the first half of 2022, outpacing the 31.26mn mt received by China – are synthetic methane produced via renewable energy, and carbon capture and storage (CCS). Both are commercially unproven technologies but could enable Japan, the world’s fifth-largest gas market, to continue burning the fuel as part of a future decarbonised energy system.

Tokyo Gas, Osaka Gas and Toho Gas, Japan’s three biggest gas utilities respectively, are working towards low-cost production of green hydrogen as part of efforts to produce synthetic methane that will help the country meet its climate goals. The companies are looking to synthesise methane via a chemical reaction between hydrogen and CO2 – a process known as methanation.

The hydrogen will be produced via renewable electricity while CO2 will be sourced from power plants and factories, or direct air capture. Methane, the main component of gas, is an extremely potent greenhouse gas (GHG) and emits CO2 when burned – but as Japanese companies are using green hydrogen and recycling existing CO2, the production and use of the synthetic methane is considered to be carbon-neutral. 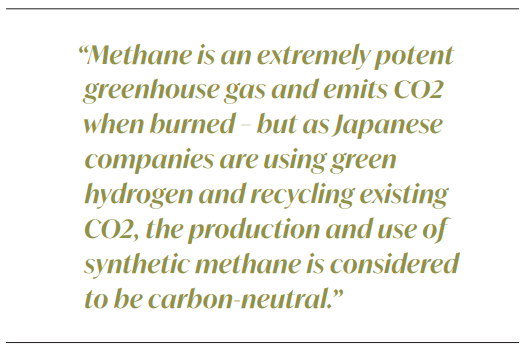 Japanese interest in methanation has picked up speed this year. In early June Shell said it signed separate non-binding memorandums of understanding with Tokyo Gas and Osaka Gas to jointly explore and evaluate the potential of renewables-based synthetic gas.

The Japanese government is positioning methanation as a growth industry and one of the key ways for Japan to achieve its stated target of net-zero emissions by 2050. The Ministry of Economy, Trade and Industry (METI) wants synthetic methane to replace 1% of city gas volumes by 2030, rising to 90% by the net-zero deadline year of 2050. A complete shift to synthetic methane for all domestic city gas consumption would cut Japan’s CO2 emissions by around 10%.

Synthetic methane is attractive for Japan because it can make use of the country’s extensive existing gas infrastructure that includes dozens of LNG import terminals, LNG carriers and city gas facilities.

The Japanese government has been providing support for the introduction of methanation via its 2tn yen ($15bn) Green Innovation Fund and a public-private council established by METI last summer to promote and develop methanation.

Tokyo Gas, Osaka Gas and Toho Gas have called for measures to help eliminate the price differential with fossil fuels and for the system to be designed so that customers in Japan can benefit from the environmental value of synthetic methane produced in Japan and overseas.

At a briefing this summer Tokyo Gas elaborated on some of the challenges of developing methanation. Securing low-cost green hydrogen is the priority and the company is working with domestic chipmaking equipment supplier Screen Holdings to develop an inexpensive cell stack – a core component of a water electrolyser – that will reduce the cost of producing hydrogen.

A water electrolyser occupies roughly the same share of green hydrogen production equipment costs as renewable energy production facilities, according to Tokyo Gas. Material and manufacturing each make up half of the cost of a cell stack, while the cell stack itself accounts for 50–60% of water electrolysis equipment costs. Tokyo Gas aims to lower the stack’s material and manufacturing costs by at least half.

Japan’s biggest gas utility is confident of doing so as its technologies for selecting materials and evaluating performance and durability – cultivated through work on residential fuel cells – can be used to cut back on the use of precious metals in electrodes. Screen Holdings meanwhile possesses the development knowhow for making parts thinner and continuous production at high speeds. 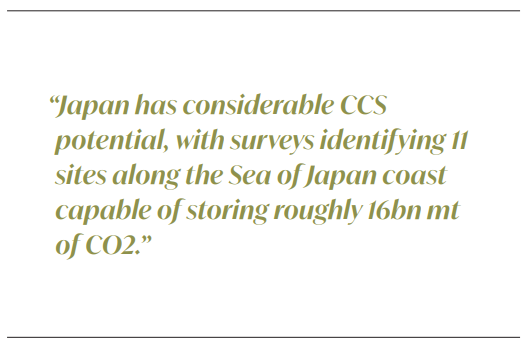 On top of equipment costs, another issue is procuring CO2 as a feedstock as it will be necessary to build a supply chain – including the infrastructure for CO2 transportation.

Tokyo Gas said it was in the process of selecting a suitable location that will give it access to all three. In November 2021 the company agreed with Sumitomo and Petronas to explore the feasibility of establishing a supply chain of carbon-neutral synthetic methane from Malaysia to Japan. It has a similar arrangement with Mitsubishi to look into potential synthetic methane supply chains in North America, the Middle East, Australia and Asia.

The plan is to start shipments of synthetic methane from overseas – where hydrogen can be produced more cheaply than in Japan – in the late 2020s, before introducing it nationwide in the 2030s. Domestic commercialisation of the technology amid a lowering of costs is expected in the 2040s, and the target is to supply 25mn t of synthetic methane by 2050.

The other decarbonisation prospect that Japan’s energy giants are exploring is CCS, but efforts have been held back to an extent by the government’s slow progress in establishing the legal rights that would underpin commercialisation.

Japan, the world’s sixth-largest carbon polluter, does not expect to launch its first CCS project until the end of this decade, according to an interim report on Japan’s long-term roadmap for commercialising CCS technologies released by METI in late May.

The interim report advocates maximising the use of CCS and carbon recycling given Japan’s 6th Strategic Energy Plan targets a 46% reduction in CO2 emissions from 2013 levels by the end of this decade. Industries ripe for CCS deployment include materials and oil refining, as decarbonisation through electrification or a shift to hydrogen are impossible, and so CO2 emissions cannot be avoided.

Launching by 2030 would also require 12–24 injection wells to be drilled every year assuming CO2 storage capacity of 500,000 t/y per injection well. The estimated cost of test drilling per well is around 5bn yen on land and 8bn yen offshore. Japan has considerable storage potential though, with surveys since 2014 identifying 11 sites along the Sea of Japan coast capable of storing roughly 16bn mt of CO2. Japan’s GHG emissions, mostly CO2, fell by 5.1% year-on-year to 1.15bn mt in the year ending March 2021.

In previous meetings with METI on the long-term CCS roadmap, companies and industry bodies had asked the government to release the roadmap as soon as possible to introduce the necessary legal frameworks for injecting CO2 into the seabed or elsewhere.

The interim report included a plan to submit a draft bill to Japan’s legislature as early as 2023 to establish a new right to store CO2 in Japan and limit liability of operators in the event of a leak or other possibilities.

CCS stakeholders are keen for the framework to be in place to improve predictability for companies. At present the scope of legal responsibility for CO2 injections is unclear, making it difficult for businesses and financial institutions to assess risks.

One issue is that unlimited liability for project operators over a long period of time could make it more difficult for private-sector business operators to obtain insurance, which could complicate investment decisions. Japanese companies therefore believe the government should assume responsibility for the project after a certain mandatory monitoring period following the completion of CO2 injection and storage.

Related to this is the post-completion monitoring of undersea CCS projects. Companies have argued monitoring may not uncover any potential leaks due to constantly fluctuating CO2 concentration levels in the oceans. As a result marine monitoring requirements under Japan’s marine pollution prevention laws should therefore be kept to a minimum.

Inpex said in April it would team up with Thai state-owned PTTEP and another company to explore the potential development of a CCS project in Thailand. This came after Inpex said in February it aimed to inject at least 2.5mn mt/yr of CO2 by 2030. To achieve this Inpex will lead development of a CCS hub near Darwin and introduce CCS at Ichthys later this decade to inject an initial 2mn mt/yr.