Ireland’s state-owned utility ESB Group has said it will monitor Brexit but thinks the UK market still presents more opportunities than concerns. In annual results March 10, it reported net 2016 profit after tax of €186mn, down from €286mn in 2015, but its revenues were stable.

Revenues of €3.25bn last year (2015: €3.36bn) were relatively flat, as lower volumes and retail price reductions in its home market of the Republic of Ireland (RoI) were offset by higher generation revenues associated with the commissioning of the 885 megawatt Carrington gas-fired CCGT power plant near Manchester and increased regulated income in ESB Networks, which is active in power distribution on both sides of the inter-Irish border.

Ahead of an event due to be held March 13 in Manchester to officially open the new plant which has generated since September, ESB generation chief Paddy Hayes told the BBC Radio's Today programme that Monday morning that the plant had run 80% of the time to date, but that ESB would like a higher capacity charge for its power if Carrington's economics were to spur ESB's development of a new 1500 MW CCGT at Knottingley in Yorkshire. ESB was given the green light by the UK government in 2015 to develop the £750mn Yorkshire plant and now must decide whether to do so.

ESB's annual report March 10 though said that “the relegation of coal in the UK merit order also means higher CCGT load factors, higher average efficiency and lower start costs" which explains why ESB's start up of Carrington in September 2016 and the improved market for UK CCGTs  meant that ESB's 2016 impairment charges were nil, in contrast to 2015 when the company booked £104mn of impairment charges principally against its CCGTs at Corby (350 MW) in England and Coolkeeragh (400 MW) in Northern Ireland.

Group-wide fuel and other energy costs decreased by €188mn, compared to 2015, according to its annual report, thanks to lower gas costs and but also lower wholesale electricity prices. Ireland (RoI) will be among 27 EU states once the UK exits, whereas an inter-Irish Integrated Single Electricity Market (I-SEM) is scheduled by regulators in both the RoI and Northern Ireland to go live in May 2018. 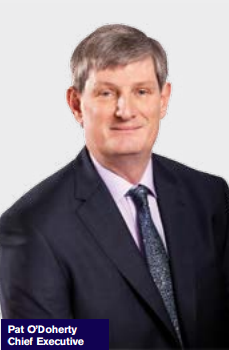 “While Brexit creates uncertainty, the UK energy sector continues to provide a pipeline of growth opportunities and ESB continues to monitor the current and emerging Brexit related impacts as these become apparent,” said ESB chief executive Pat O’Doherty (pictured above).

Group finance director Pat Fenlon added that, while Brexit creates uncertainty, ESB would continue to manage its UK assets which are matched by £-sterling funding: “We will continue to monitor the impacts from Brexit and other world-wide socio-political events and take prudent financial management actions, as appropriate, so as to protect ESB’s financial strength.”