Despite its 33 trillion m3 recoverable reserves and 240bn m³/yr marketed gas production, Iran has had a tough time meeting all the demand for its gas this winter. But this is only a part of problem. The giant South Pars field which contributes more than two thirds of the country’s output is expected to lose 10bn m3 output each year after 2023 as the pressure falls.

According to a study, released by the parliament’s research centre on January 26, the gas industry is becoming loss-making. As its costs go up and the gas price, unchanged for the housing sector, remains low, it is impossible for the government to balance its books. In November 2019, the government increased gasoline prices, but that led to massive protests throughout the country and left about 1,500 dead and thousands of arrests. So it is circumspect about hiking gas prices for residential consumers.

In the last fiscal year, ended March 21, housing sector demand dropped 12.3% to 173.4mn m3/d owing to the moderate winter weather; accordingly, deliveries to other sectors increased. Iran’s production also increased by 7.4% year on year. This pushed up domestic sales revenue by 6.6% to rials 176 trillion ($1.3bn based on open market rates).

For this fiscal year, the country had counted on a hefty 39% growth in revenues thanks higher prices for commerce and industry and a 70mn m3/d output growth. However, these plans were stymied by an unexpectedly cold winter and delays to projects aimed at raising production.

So while full output capacity has been 792mn m3/d of dry and associated gas, household demand has been at an historic high of 600mn m3/d. The country had to cut deliveries to Iraq from 25mn m3/d to 3-4mn m3/d in January and also to its own power plants and the industrial sector. 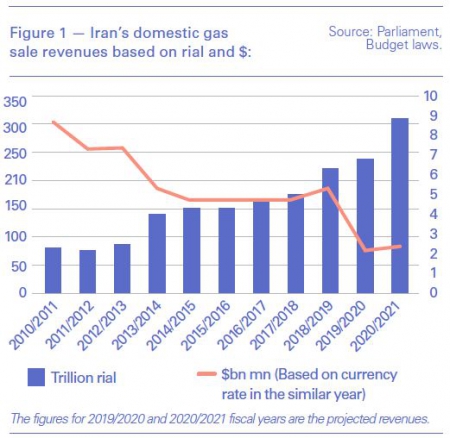 Gas costs on average about $8.1/’000 m3, far below the regional price. Because of that, the country’s exports which was only 6% of total production, brings more than domestic sales revenues to the budget.

Iran sold 209bn m3 at home and exported 12.1bn m3 last fiscal year. Domestic consumption is rising by 4.5-5%/yr but this year’s gas shortage and delays to projects have challenged its export growth.

If Iran is able to achieve its domestic gas sale revenue targets for this year and next, the figure will rise by 279% to rials 309 trillion, compared with 2010. However, based on dollars, it will fall by 71% to $2.3bn.

And compounding the difficulty are, according to next year’s budget law, the costs of gas production and distribution in the country are set to go up 36% year-on-year to rials 128 trillion, while the value of repayments for gas projects is rials 80 trillion – double last year’s.

In short, if Iran can even sell rials 309 trillion-worth of gas in the domestic market, two thirds of that is to go on costs and re-payments. And the way costs are rising, the gas industry could become a loss-maker in the coming years.

Iran exported 7.6bn m3 to Turkey and 4.1bn m3 to Iraq in 2018, according to BP’s 2019 Statistical Review of World Energy. Iran’s oil minister Bijan Zanganeh announced January 26 that Tehran has not received any money for exporting gas to Iraq since US imposed sanctions on the country (October 2018).

Based on temporary US waivers for Iraq, the country can import Iranian gas and electricity, but the payments have to be deposited in a bank account in Trade Bank of Iraq in Iraqi dinars and Iran can only access the money for buying humanitarian goods from Iraq.

Iran’s total exports to Iraq exceed $14bn/yr, while imports from the western neighbour are less than $60mn. So in reality Iran cannot use above $2bn-worth/yr gas and electricity export revenues to Iraq.

On the other hand, the new 120-day US waivers for Iraq expire next month and it is not clear whether Washington plans to extend that or nor.

The Trade Bank of Iraq announced January 21 that if Washington does not extend them, it will stop processing Iran’s gas payments.

Iran has two contracts with Iraq to deliver a total 50mn m3/d, but in the warm season of 2019 it hardly reached half of the contractual volume and, at the height of the cold spell in January, this fell to 3mn m3/d in January 2020, Iraq’s electricity ministry told the local al-Sabah newspaper January 28. The ministry said it was searching for alternative gas imports – a clear message for Iran that Baghdad will not tolerate gas supply cuts in winter. Iraq generates 19 GW electricity, of which a third is powered by Iranian gas. Iraq said recently that electricity generation had dropped to below 14 GW as Iranian gas deliveries fell.

Turkey buys Iranian gas and as Turkey exports goods to Iran worth $2.5-3.5bn/yr, Iran can use Turkey’s gas payments for importing goods.

According to state-owned National Iranian Gas Company (NIGC) assessments, production at the South Pars field development as a whole should peak in 2023, and then begin declining sharply. The gas pressure at its 38 active platforms that weigh 1,500 metric tons (mt) each is about 120 bars, equal to 118.5 atmospheres. But after 2023 it will fall by 7 bars/yr, causing an annual output decline of 10bn m3.

Iran forecasts that a further 8-10 platforms weighing 20,000 mt each, plus large-sized compressors, will need to be installed in order to prevent production dropping after 2023, but this will all cost around $20-25bn. Zanganeh said last October a local company called Mapna might be able to help supply this new equipment but Mapna, which has experience mostly in power generation, relies on foreign equipment suppliers, such as Germany’s Siemens, which has been selling it $1.6bn-worth of turbines. As such, there are doubts that Mapna is up for the task.

Without installing compressors of this magnitude, the country will not be able to keep up production, especially in winter.

Given the rapid growth in gas production and distribution costs as well as its repayment obligations, Iran’s gas industry will become unprofitable in mid-2020s without export growth. The National Iranian Oil Company, which owns NIGC, itself faces debts above $50bn. Iran’s oil exports declined from 2.5mn b/d in 2017 to below 300,000 b/d in late 2019 because of US sanctions.

Crude oil traditionally accounts for 60% of the country’s total exports and, starved of its petro-dollars, its total oil and non-oil exports will reach $55.5bn in 2020 (half of 2017), about $3bn less than Iran’s total imports.

US Extends 90-Day Waiver for Iraq