The international community should disregard US sanctions and continue to support Iran's gas sector in the interests of the global climate, said its energy minister October 2.

Addressing the Gas Exporting Countries Forum (GECF) meeting in Russia October 2, Bijan Zanganeh reminded his audience that Iran has 17% of the global gas reserves and can produce 750mn m3/d. Helping Iran to boost this sector would promote sustainable development, he said.

According to official documents, obtained by NGW, Iran produced 711mn m3/d gas from reservoirs during last fiscal year, ended March 21, 2019, of which 652mn m3/d were injected to grid after being processed.

Touching upon the 70% share of gas in Iran’s primary energy consumption basket, Zanganeh said that 95% of the country's population has access to gas. BP estimates that gas meets over 68% of Iran’s energy demand.

Iran sits on 33 trillion m3 of gas, second only to Russia. Its exports of crude have already been hit by sanctions, while French major Total had to abandon its South Pars gas production project when US president Donald Trump pulled out of the treaty that his predecessor Barack Obama had helped negotiate a few years earlier.

Zanganeh said that 1.5%/yr growth is estimated for gas demand by 2040 globally, counting for one fourth of total energy demand. “I call international to depoliticize energy market, evade US sanctions and increase the share of gas in global energy demand to 30%,” he said.

Zanganeh added that this year some new phases of giant South Pars gas field would become operational and add 70mn m3/d to the country’s production level.

International statistics indicate that though replacing gas with oil products prevented raid acceleration of CO2 emissions in Iran, but it has increased dramatically by 310% since Islamic Revolution in 1979, standing above 670mn mt/yr.

The deforestation rate in Iran is also high, running at 100,000 hectares/yr, according to official statistics: 60% of the forests have gone since 1979. 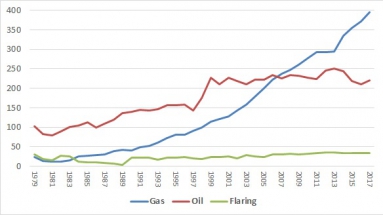 Zanganeh also said that Iran has planned to zero flaring by 2021 but that seems unachievable. The country’s gas flaring stands at 18bn m3/yr, according to World Bank, which is second only to Russia. Last week, Zanganeh told parliament that it would cost $8bn to cut flaring by 90%. So far, the country has spent $3.5bn on projects aimed at that.