By the end of March 2022 Iran expects to complete the sole remaining section of its 24-phase, 37-platform upstream project to tap the vast gas reserves of South Pars. Ahead of this, attention has already begun to focus on the field’s future development with a drilling campaign commencing in late November to appraise targets in undeveloped areas in the north of the deposit.

Forming a portion of the world’s largest gas deposit which is shared with Qatar, South Pars has around 14 trillion m3 of gas reserves and a further 18bn barrels of condensate.

With the National Iranian Oil Company’s (NIOC) phased approach targeting a total daily output of 790mn m3 and the Ministry of Petroleum hoping to reach at least 1bn m3/day as quickly as possible, ‘what next?’ was always going to be asked as the project neared its conclusion. 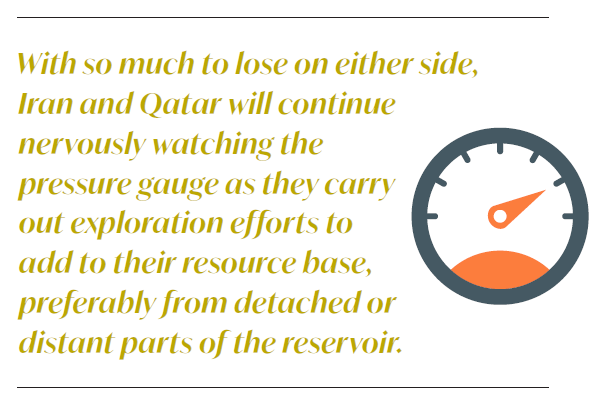 Development work began at South Pars in 1998 with first production coming in 2002 from Phases 2 & 3, near the maritime border with Qatar. By 2013, output had reached 280mn m3/d, ramping up quickly under the direction of former oil minister Bijan Zanganeh, who retired in August. During his term in office, nine offshore phases entered production covering 26 offshore platforms and 228 wells, raising output to 700mn m3/d before he was replaced by Javad Owji.

South Pars now represents around 66-70% of Islamic Republic’s total gas output, and it also flows around 700,000 barrels/d of condensate and a further 50,000 b/d of crude.

However, in August, NIOC subsidiary Pars Oil and Gas Company (POGC)'s head of oil and gas engineering, Ali Akbar Majed, said that “due to the natural decrease in the pressure of the South Pars field gas reservoir following its production over the last 20 years, the production rate of this reservoir will inevitably decline even more in the coming years,” alluding to the need to more drilling.

Reservoir pressure has long been a concern for both Iran and Qatar, with the latter implementing a moratorium on new drilling in its North Field area that ran from 2005-17 amid concerns that pressure drops on the Iranian side were impacting Qatari gas output.

Meanwhile, in October, POGC CEO Mohammad Meshkinfam said that gas production from South Pars had peaked and warned that output was expected to fall by around 28mn m3/d – the equivalent of one full phase – each year from 2025 onwards. He noted that around 1.76tn m3 or 15% of the field’s gas had been extracted, and existing infrastructure and facilities are capable of producing another 4.19 trillion m3 or 35% of the resource.

With such a dramatic drop-off anticipated and gas vital to the petrochemical and refining industries of southern Iran as well as the domestic grid, Tehran has earmarked a spend of around $22bn between now and 2027-29 just to counter natural decline, with the majority of this to be spent on compression platforms and acidification to raise pressure and maintain gas flows.

For Iran, hydrocarbon production is a delicate balancing act between catering to domestic gas demand and generating government revenues from crude and condensate export sales – the latter has become all the more challenging since the US withdrew from the Joint Comprehensive Plan of Action (JCPOA) in 2018.

While efforts remain ongoing to raise poor recovery rates across Iran’s world class oilfields, Tehran anticipates that South Pars can achieve 1.3mn b/d of condensate production in 2022, though it is only likely to produce at this level if the easing of sanctions allows for the export of significant volumes.

Meanwhile, with around 95% of the population connected to the gas grid, Iran is among the top five gas-consuming nations globally. The latest available data shows Iranian gas output at 950mn m3/d during Q3 with South Pars flows complemented by around 250mn m3/d from other gas fields and another 70mn m3/d of gas associated with the country’s oil production.

However, despite major annual maintenance work across all of the field’s platforms by POGC to ensure stable production during winter months, shortages can arise. Indeed, NIOC’s gas counterpart NIGC said in late November that consumption had exceeded production, with users asked to monitor gas usage and households called upon to maintain a temperature of 18-21°C.

With gas in high demand and concerns persisting about reservoir pressure, there is clearly incentive for Tehran to increase gas production and a further $11bn is seen covering plans to add a further 240mn m3/d of gas production.

This includes the development of the remaining SP11 phase where work continues at the SP11B location following the start of drilling in December 2020.

The project is being carried out in two stages, first targeting the addition of 14mn m3/d of sour gas through the drilling of five appraisal and development wells, with a further seven wells planned to increase output to 28mn m3/d by the end of Q1 2022.

It is being developed by another NIOC subsidiary, Petropars, following the withdrawal first of France’s TotalEnergies in 2018 and then China National Petroleum Corp. (CNPC) from a $4.9bn project to drill 12 wells across the concession.

POGC is ultimately responsible for the development of the upstream phases of South Pars while Petropars carries out surface and subsurface work.

It is illustrative of Iran’s need for additional gas flows that just a few weeks after the first SP11 well was spudded, an early appraisal well was drilled in the east of South Pars. As the results of this well are analysed, efforts to further explore South Pars are now ramping up with the Iranian Offshore Engineering and Construction Co. (IOEC) kicking off a four-well appraisal campaign under POGC’s supervision targeting areas outside the field’s existing blocks.

Announcing the drilling of the first of these, the SP-16 extension appraisal well, POGC’s Majed, said: “This well is aimed at determining the extent of expansion of South Pars gas field in the north side of the field and evaluating the potential of uncharted areas of this section for development.”

It is little surprise that Iran is targeting the northern area of the field further from Qatar as Doha works rapidly to provide feedstock for planned expansions to its liquefaction capacity.

With so much to lose on either side, both countries will continue nervously watching the pressure gauge as they carry out exploration efforts to add to their resource base, preferably from detached or distant parts of the reservoir.