“A new business model is emerging in the CCS market that few people today understand,” says Claude Letourneau, CEO of Canadian CCS pioneer Svante, in an interview with Gas Transitions. In this market Svante will be operating as technology provider. Letourneau believes the company’s “unique low-cost carbon capture technology may well become the number one decarbonisation solution for industry worldwide.”

The Vancouver-based carbon capture specialist Svante – named after the Swedish scientist Svante Arrhenius who discovered the greenhouse effect in 1896 – has the ambition to become the world-leading technology provider for industrial carbon capture installations. The company was founded in 2007 as Inventys Thermal Technologies. It was originally active in the production of hydrogen for the fuel cell market. As that market did not get off the ground, it switched to CO2 capture, explains Claude Letourneau, who came on board in 2017.

“The company was very R&D focused at the time,” says Letourneau. “I was hired to scale up the company to the next level.” Over the last few years, Svante raised $150 million in private equity. “And we will be announcing an additional $25 million in venture capital next week [end of February]. We now have all the financial capabilities we need to execute our commercialisation plans.” 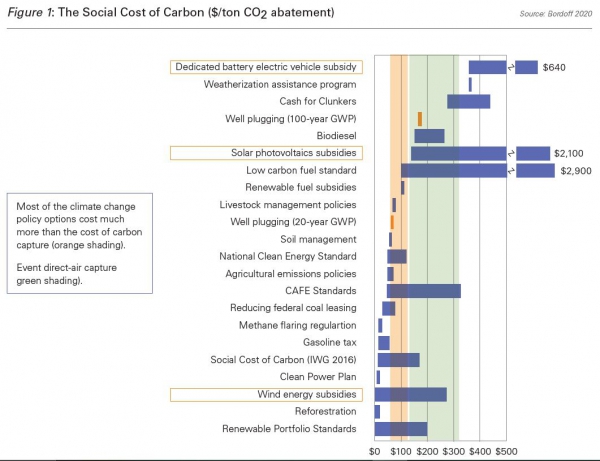 Among the investors are Chevron, Husky, the Singapore-based sovereign wealth fund Temasek, CO2 broker Carbon Direct and the Oil and Gas Climate Initiative (OGCI). OGCI is a CEO-led $1 billion+ investment fund supported by the likes of Shell, BP, Total, ExxonMobil, Saudi Aramco, CNPC and ENI. “It is the only investment they have made so far in carbon capture technology development,” says Letourneau.

Letourneau notes that today some 60 million metric tons (mt) of CO2 is captured and stored. “Total industrial emissions are around 10 GT, 10,000 million tons, 21% of total global emissions. So that’s the market we look at: 10 GT of CCS.” According to Letourneau, if Svante’s solid sorbent technology is used, the capital investment needed to achieve this level will be $2 trillion. If conventional technology is used, the investment will be twice as high. If the CO2 is captured directly from the air, the investment will be $7 trillion. “So as far as we are concerned, we are looking at a $2 trillion total available market.”

That market is still far into the future, though. Svante currently operates just one small demonstration plant with a capacity of 10,000 mt/yr in Saskatchewan in Canada. At the end of 2023 it wants to be ready to start building a big facility with a capacity of 1.5 million mt per year at the LafargeHolcim cement factory in in Florence, Colorado. The project is a partnership with LafargeHolcim, energy company Total, EPC contractor Kiewit and Oxy Low Carbon Ventures. 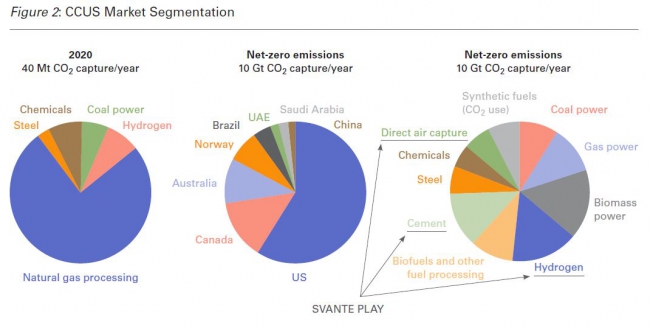 By 2030, says Letourneau, Svante aims to be involved in projects that capture 40 million mt of CO2 per year. Revenues are projected to be between $500 and $600 million from the sale of proprietary equipment and filters.

According to Letourneau, Svante’s technology has several unique features that no other company in the world has developed. Instead of liquid chemicals, it uses solid adsorbents with extremely high surface areas (7,000 m2/g) to capture the CO2. Specially designed filter platforms enable the adsorbents to switch between adsorbing and releasing CO2 very quickly, resulting in more CO2 being captured per unit volume of adsorbent. The rotary adsorption machine used by Svante is much cheaper than the large chemical solvent towers that are typically used in carbon capture projects.

“Our technology enables a 50% reduction in capital cost compared to conventional methods of carbon capture,” says Letourneau. “For example, the technology used at the Norcem Cement Plant in Norway, based on Aker liquid amines, has twice the capital cost.”

Svante aims at a capture cost of $50/mt of CO2. This is equivalent to the $50/mt tax credit that is available in the US for CCS projects. “This makes it an attractive proposition for our potential customers.” 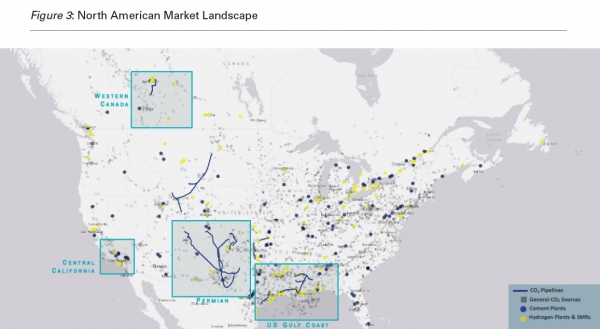 Letourneau believes there currently is a “voluntary CO2 price” in the market of $120/mt, which large companies are prepared to pay. He says CCS as proposed by Svante is one of the lowest-cost options. “Most of the climate change policy options are more expensive. Subsidies for EVs for example cost between $300 and $600 per ton of CO2 abated. Subsidies for solar PV are even more costly.”

Svante will initially concentrate at cement plants and hydrogen from steam methane reformers.  At a later stage steel plants will be added. Letourneau: “In our two core market segments we can achieve costs of $50/ton.” For gas combined cycle plants, he adds, costs would be higher, around $90. 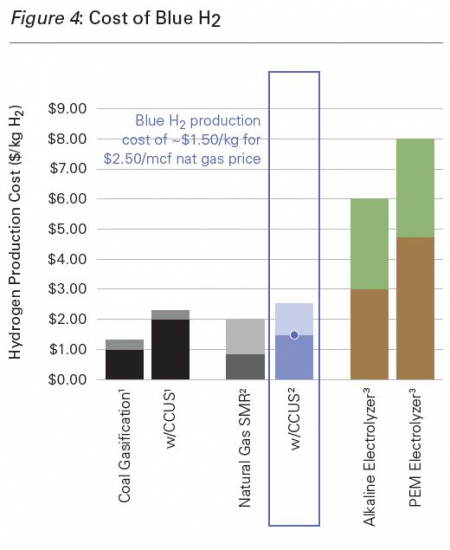 Svante’s production process for ‘blue’ hydrogen is different from the processes used by Shell’s Quest project in Canada and by Air Products in Texas, Letourneau explains. “Typically they collect CO2 at high pressure after the purification process. We collect CO2 from the flue gas where you have double the amount of CO2 and at a concentration of 20%, and we do it at ambient pressure. Ours is an end of the pipe, non-intrusive solution. It is easy to implement in existing SMR facilities.”

The CEO believes the blue hydrogen market will initially be a retrofit market. “The first five years we will mostly be retrofitting ‘grey’ hydrogen SMR installations to produce ‘blue’ hydrogen.”

In North America the cost of producing grey hydrogen is around $1 - $1.50 per kg. “With our technology we increase the price to $1.50-1.70 per kg. That’s still a lot cheaper than green hydrogen, which costs between $3 and $6 per kg. There is a lot of buzz around green hydrogen, but it is a lot more expensive.”

Svante will focus on the North American market, which, Letourneau points out, has several features that make it ideal for carbon capture and the production of blue hydrogen: low energy prices, a large CO2-pipeline network and ample onshore underground storage options.

“In the US CO2 storage adds about $10/ton to the cost. In Europe there is very little onshore storage. It’s mostly offshore. The Northern Lights project in Norway, for example, collects CO2 from industrial hubs, liquefies it and transport it by ship to offshore gas fields. That adds $30-$40 per ton to the cost.”

Svante will choose its locations to make optimal use of the existing infrastructure of cement plants, steam methane reformers and hydrogen pipelines in North America.

With all the commitments made by major companies to become net zero, Letourneau sees a new CCS business model emerging. “The model we see developing is that there will be a project developer who will identify an emitter of CO2. They will get an agreement to get the flue gas and set up a company capturing it, and provide the compressed CO2 to someone who will be able to store it, most likely an oil or gas company that has the capacity to do so. A company like Microsoft may be investing in such projects to achieve net zero emissions.” 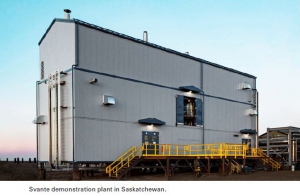 In this model, Svante will be the technology provider. “We have a unique patent position on the metal-organic frameworks (MOF) – the sorbent materials that adsorb the CO2 – and on the structured laminate of the filters. We also have some proprietary designs of the rotating machine.” Svante will not get involved in selling or storing CO2.

The Svante process does have one drawback: the sorbent captures only 90% of the CO2. But the company has a solution to get to zero emission: it has entered into a partnership with Swiss company Climeworks which is involved in direct air capture (DAC). 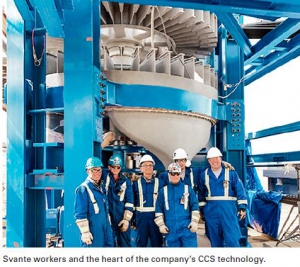 “This is a very different proposition,” notes Letourneau. “Air has a CO2 concentration of less than 0.04% compared to the 20% in flue gases. Currently it costs $600 per ton to capture CO2 from the air. With our technological know-how, we are helping Climeworks bring down the cost to $150 per ton.”

At that price, says Letourneau, it will become possible for projects to become net zero. “If we have a project that reduces emissions by 90%, we will add 10% with direct air capture to get to net zero.”