Within Shell, hydrogen has gone from a relatively small activity to one that is now seen as a potentially very large contributor to decarbonisation, says Oliver Bishop, General Manager Shell Hydrogen, in an exclusive interview with Gas Transitions. The major reason, according to Bishop, is the rapid cost reductions in renewable power and electrolysers which are making clean hydrogen an increasingly feasible option. Bishop also reveals that Shell has managed to cut hydrogen distribution and refuelling costs by 50% over the last two years. 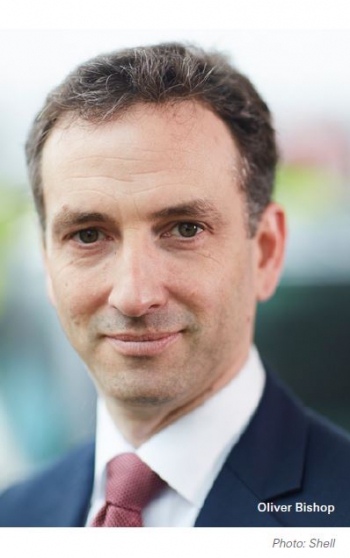 In 2018, just two years ago, Shell presented its famous Sky scenario, which “illustrates a technically possible, but challenging pathway for society to achieve the goals of the Paris Agreement”. In this scenario, the role of hydrogen remains very small until the middle of the century, although it rapidly grows thereafter to account for 10% of global energy needs by the end of the century.

However, the next edition of Sky may well present a much more rapid expansion of the role of hydrogen in the energy mix. Certainly, if Shell’s own activities are anything to go by. The company has been announcing several potentially record-breaking hydrogen projects in recent months.

In February, Shell together with Gasunie announced plans for a huge, 10 GW offshore wind and green hydrogen effort that the companies are investigating in the north of the Netherlands to be realised in 2040 (or 3-4 GW offshore wind by 2030). Early in May, this was followed by the company’s biggest single green hydrogen project yet: a plan to build a 200 MW electrolyser in Rotterdam that will use power from a newly to be built offshore wind park in the North Sea. (See box)

These plans mark a sharp scaling up from projects that are currently being built, such as the 10 MW electrolyser at the Shell Rhineland Refinery in Wesseling, Germany, which will be one of the world’s largest hydrogen production facilities when it’s completed, probably by the end of 2020.

What is happening? “Fact is, over the last two years, hydrogen has gone from being a relatively small activity within the company to one that we now see as potentially being a very large contributor to decarbonisation,” says Oliver Bishop, the Zürich-based, Anglo-Swiss General Manager of Shell Hydrogen, in an interview with Gas Transitions.

Bishop, who has worked for Shell for 22 years, covering a variety of roles including Mergers & Acquisitions Manager, started on his present job at the beginning of 2013. “At that time,” he recalls, “the hydrogen division was very small. There were just 5 people working in it.”

In those days, in the early 2010s, Shell’s hydrogen division was focused mostly on building hydrogen refuelling stations, mainly in Germany and California. But demand remained limited for a long time. “We have seen the ups and downs of this market,” notes Bishop.

More recently, the pace of the hydrogen transport market has been picking up. Under Bishop’s remit, Shell helped to clinch the H2 Mobility Germany project, “the world's largest hydrogen infrastructure play involving equity from Shell and five other key partners, German and EU funds, as well as a multitude of automakers as key stakeholders”, with €350mn of funding. Under this project, Shell and its partners have completed construction of about 90 hydrogen refuelling stations in Germany of a planned total of 400. The company has also been building refuelling stations on the west coast of the U.S., the UK, Canada and the Netherlands.

Bishop’s team meanwhile has expanded to over 50 people. And, as the earlier mentioned green hydrogen projects make clear, its activities are no longer confined to the transport market. Shell is aiming to become a big player in the production of “green” hydrogen from renewable power as well as in “blue” hydrogen from natural gas in combination with carbon capture and storage (CCS).

So what has changed, in the perception of the company? There are two elements involved, says Bishop. “First, costs of solar and wind production have dropped dramatically. In parts of the world, such as Australia, you can now see examples of solar power produced at $0.01/kWh. In addition, electrolysis manufacturing costs have also dropped dramatically and continue to drop. The combination of those two means that, purely on an economic basis, hydrogen is getting closer to a competitive price range.”

Secondly, according to Bishop, “on the back of the Paris Agreement there is a very large recognition by a lot of countries in the world of the need to decarbonise. And linked to that is the view, now widely shared, that hydrogen offers countries energy security, job creation, ability to improve local air quality, and the ability to export new technology to other countries. If you look at countries like Japan, Korea and China, for instance, they are moving rapidly to the widespread adoption of hydrogen.”

As an example of how quickly the perception of hydrogen has changed, Bishop mentions the Hydrogen Council. “We started this in 2017 with 12 companies, as a global advocacy group. We now have over 80 members, representing every walk of life, not just energy and transport companies, but airplane manufacturers, chemicals and plastics producers, banks, and so on. This reflects the growing recognition that hydrogen has an important role in the decarbonisation agenda.”

Nevertheless, for all the enthusiasm about hydrogen, analysts agree that there are still considerable obstacles to overcome. For example, according to a recent report from think tank Bloomberg New Energy Finance (BNEF), transport and storage of hydrogen presents serious challenges, because of its low density, and “will require massive infrastructure investment”.

Bishop concedes that this is the case, but he is confident the challenges can be overcome. “There is no doubt that it is more expensive to transport and store hydrogen than other denser liquids. But I don’t doubt the industry will find solutions. This is not a transition that is happening overnight.”

He notes that Shell itself is making steady progress in addressing some of the key issues the industry is up against, particularly in transport and distribution. “My team has been working on cutting costs of distribution and retailing of hydrogen. Over the last two years we managed to cut costs by 50%. We need to go another 50% before we are at the same point as conventionally retailed gasoline, but we can see a way forward.” 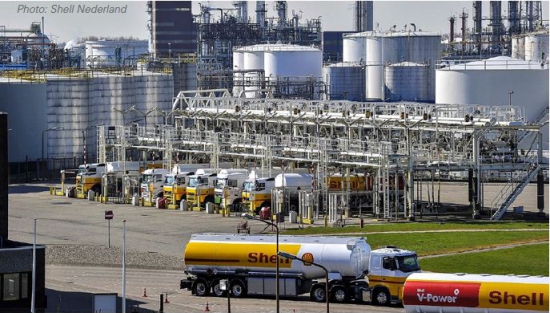 Shell is also doing research on the transportation of hydrogen by ship, notes Bishop. “In December 2019 we launched the world’s first liquid hydrogen carrier, the Suiso Frontier, together with Kawasaki Heavy Industries, Iwatani and others, in Japan. We have been demonstrating how to safely load and unload liquid hydrogen, and we will be carrying out shipping trials between Australia and Japan. It’s a development similar to what we have seen in LNG. When we started with LNG many decades ago, people said it would be impossible. Now we have a worldwide supply chain. Australia has a vast solar resource, so I think it’s feasible to produce hydrogen there and ship it to countries like Japan, South Korea and China. It does require large investments. It’s not easy. But in the time-frame we are talking about, it’s doable.”

With regard to the production of green hydrogen, the big challenge, says Bishop, is to make very large-scale electrolysers. “What we are planning to do in Rotterdam is an order of magnitude larger than anything that has been done before. It’s not technologically difficult. But the know-how around the plant, how you optimise processes, manage intermittency, storage, that all needs to be refined.”

And it doesn’t stop there. “Improvements have to be made all along the supply chain, all the way to the forecourt, where we have to provide fast refuelling and make sure customers have a great experience. There is a lot of nitty-gritty stuff that needs to be figured out to make this possible.”

For Bishop there is no question that “blue” hydrogen will be needed in addition to the green variety. He believes in the future of CCS. “In the Netherlands we are working on a blue hydrogen project, Porthos, with the Port of Rotterdam. We have also just made a final investment decision on a large CCS project with Equinor and Total in Norway, Northern Lights. The only real challenge I can see around CCS is public acceptance. The onus is on the industry to show people that the CO2 will stay in the ground.”

Shell Hydrogen is part of the New Energies division within Shell, in which the company has concentrated its renewable power and renewable gas activities. Is this the right place, we ask, given that hydrogen is becoming such a major activity?

But according to Bishop, that is the wrong way to look at things. “New Energies is a major part of Shell. It’s fully integrated with the rest of the company’s activities. It’s almost a question of semantics, really.”

There are a lot of activities in the company that integrate very well with hydrogen, notes Bishop. “For example, if you have offshore wind, you produce a lot of renewable power. You can put that straight into the grid, but you can also use it for any number of applications downstream of the electrolyser: for our own businesses, to supply to industrial clients, as fuel for heavy duty trucks. For truck manufacturers, the EU’s Green Deal means they will have to produce zero emission trucks. They are looking for solutions.”

He gives another example. “Take the hydrogen refuelling stations that we are building in Germany. Two-thirds of them are at Shell forecourts. There we offer diesel, gasoline, car washes, but also electric charging. Or take the electrolyser we are building at our Rhineland refinery. Within this complex we are working hand in hand with our colleagues who formerly managed other types of gas but now every easily switch to managing hydrogen.”

For Bishop it’s clear: there is no way around hydrogen. “I don’t see any energy transition without hydrogen. It is a major contributor to the decarbonisation agenda. We need to get on with it, alongside all the other things we need to do, such as wind and solar. It will also create jobs.”

Does he see something like a hydrogen economy emerging in the future? “Yes, there is that. You can already see it in Japan and Korea. It makes sense. After all, hydrogen is the most abundant element in the universe.”