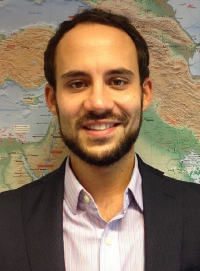 “The emphasis on gas as a geopolitical issue is not justified,” says Luca Franza, Head of the Energy, Climate & Resources Programme at the Italian Institute of International Affairs (Istituto Affari Internazionali) and Associate Fellow at the Clingendael International Energy Programme (CIEP), in an interview with Gas Transitions. “Oil is much more important.” Franza, who has just published a Ph.D. study on how EU liberalisation impacted gas contracts between the EU and Russia, concludes that the liberalisation of the EU gas market benefited Europe and hurt Russia, but “it was not a gamechanger”. According to Franza, “the European debate on the pros and cons of natural gas has now shifted to a debate on green versus blue hydrogen”. Unfortunately, he adds, the gas industry is “yet again on the defensive”.

Between €3 billion and €6.8 billion per year is how much Europe saved on gas imports from Russia in the period 2009-2018 thanks to the liberalisation of the EU gas market and particularly the shift from oil indexation to hub indexation. That is one of the major conclusions of an exhaustive analysis made by Luca Franza and published by the Clingendael International Energy Programme (CIEP) in The Hague, the Netherlands, in October 2020. The study, The Political-Economic Dimension of Transformations in EU-Russia Gas Trade Mechanisms, freely available on the CIEP website, earned Franza his Ph.D. 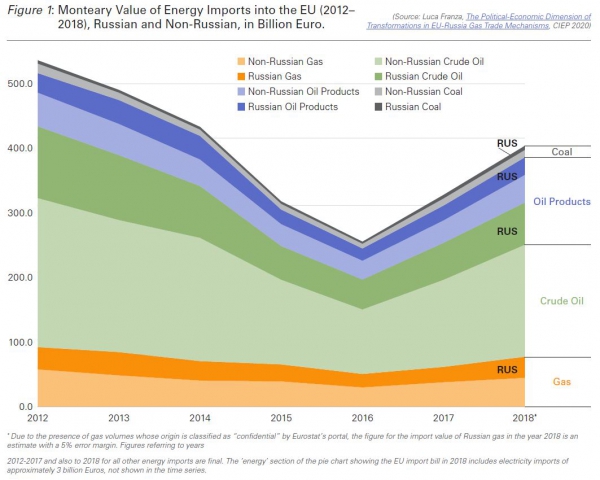 “It’s the first attempt to measure in economic terms the impact of the shift from oil indexation to hub indexation,” notes Franza, an Italian by birth, who worked for seven years at CIEP before he became Head of the Energy & Climate Programme of IAI in Rome in the spring of 2020. He is still Associate Fellow at CIEP, and currently also a lecturer at the Paris School of International Affairs Sciences Po, and a member of the Sustainability Board at Italian utility company Edison, a subsidiary of EDF. “Up to now the topic has always been studied from a company perspective. I looked at how liberalisation impacted the import bill of the EU and the export revenues of Gazprom – and how it impacted political and economic relations in general.”

After abstracting from other market influences, Franza found that liberalisation did benefit Europe, but only modesty. At the same time, it impacted Russia’s revenues negatively – but again only modestly. “Relative to the total EU energy import bill, the savings on gas are not a gamechanger,” notes Franza (Figure 1). 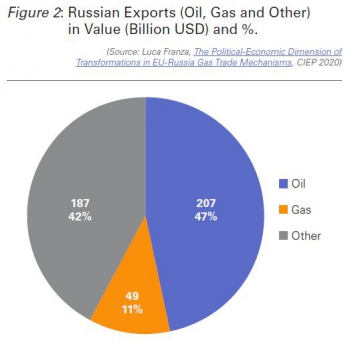 Similarly, for Russia, “it had a negative effect. But compared to total Russian state revenues on oil and gas and total exports, it was not major.” (Figures 2 and 3). Oil, Franza notes, is much more important to Russia than gas.

“All the emphasis on gas as a political issue is not justified by the facts,” says Franza. “We hear a lot about how buying gas from Russia is supposed to enrich that country. But the effect is much exaggerated.”

“Natural gas has been a victim of geopolitical tendencies that emerged exogenously. Gas itself is not a bone of contention,” Franza concludes. He believes “it’s in the interest of the global gas industry to depoliticise gas as much as possible. Politics should not interfere in the gas trade. That includes Nord Stream 2, which just creates more options, and thereby benefits Europe.” 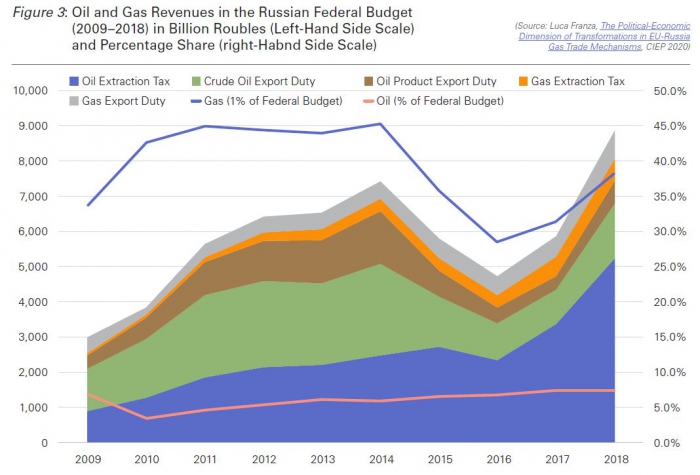 Franza’s study, which is quite readable and contains many fascinating insights, also concludes that “liberalisation alone” was not enough to make gas competitive with coal and renewables. “There was an argument in Europe that gas was failing to be competitive, and was squeezed between renewables and coal, because there were excessive rents in the industry. These were attributed to oil indexation. Liberalisation was supposed to change that. Actually what I saw was, yes, there were savings with liberalisation. But if you read my analysis year by year it is clear that global oil and gas market fundamentals were much more influential. It was the oil price collapse in 2014 and the shale gas and LNG revolutions that made gas competitive. Plus the excessive LNG import capacity built with public subsidies.”

Franza notes that, although liberalisation deeply impacted the nature of EU-Russian contractual gas relations, “remarkably, long-term contracts are still alive and functioning. They are bent but not broken.” Oil indexation, too, still exists “in the sense that oil prices still impact gas prices.”

Long-term contracts survived because of the flexibilities they offered. “Until before the COVID-19 crisis, new long-term contracts were still usually being signed to underpin investments,” but the model has changed: “They are no longer point-to-point to contracts. Even in Eastern Europe, after the antitrust probe directed at Gazprom, Gazprom has had to change the delivery. Now after a molecule enters EU borders, they lose control over it.”

At this moment, Europe has a very comfortable position in the international gas market, says Franza. “In terms of security of supply, Europe has enjoyed and is enjoying ideal conditions, apart from concerns around Ukraine transit. Europe gets the flexible LNG that is not absorbed by Asia. Other suppliers are price-takers. The Russians cannot play games. They have realised this of course and go for volume over value, which benefits Europe.”

What has also benefited Europe is that LNG producers kept on investing in new LNG production in 2019 despite low prices. “This was very surprising. They did it because they assumed that we were heading for a price spike around 2025. It was very risky. Now with the impact of COVID-19, the likelihood that gas prices will go up significantly and structurally is extremely small.” Only if there were a very strong economic recovery, and countries like China and India made a massive bet on gas, could the European market experience high prices, according to Franza.

However, looking to the future, Franza sees an entirely new situation emerging in Europe. “Decarbonisation,” he notes, “has come to dominate the political agenda completely. The net-zero goal for 2050 is very ambitious, but the 55% reduction in 2030 may be even more ambitious.”

And “we need to be honest,” he adds. “This does not look very good for natural gas.”

One positive point to emerge from the recent energy debate for the gas industry, notes Franza, “is that there is now general awareness that electrification alone cannot meet our energy needs. Even the scenarios made by Eurelectric, which are very favourable to electricity, project 60% electricity by 2050 as an absolute maximum. Most other scenarios don’t get that high. We can safely say that at least around half of Europe’s energy supply will come from molecules in 2050.”

The natural gas industry can play a role in this market, but “it needs to deeply transform itself,” says Franza. He points out that “the political debate has not been too positive for natural gas. It does not look like the gas industry will get a lot of political support. The attitude from policymakers is not to oppose gas, but not to support it either. You can do CCS, they say, and produce blue hydrogen, but you have to do it yourself, because we policymakers prefer green hydrogen.”

According to Franza, it is a pity that “we have not seen a significant upscaling of CCS up to now. Then the gas industry would have been able to present itself in a different way in the debate.” He exhorts the gas industry to invest in CCS and also “to keep seeking governmental support and convince policymakers there is a case for blue hydrogen.”

Franza is convinced that blue and green hydrogen are not competitors. “They should strengthen each other. We need to build an entirely new energy system from scratch. Upstream, midstream, downstream. That’s a huge challenge. The main thing is to get the molecules to flow. And to build a hydrogen backbone to make that happen.”

The true potential of green hydrogen is still unclear, notes Franza. “If we go towards deep decarbonisation with a huge amount of renewable energy needed for electricity and green hydrogen, we could encounter problems of land availability in Europe.”

There is a solution, however, which is particularly interesting for Italy: to import hydrogen from North Africa. The IAI is about to publish a study on the potential of North African hydrogen imports. “The outlook is quite promising. Renewable energy, not just solar but also wind, can be produced at very low prices in North Africa, 3 to 5 cents per kWh, and this is expected to decrease to 1 cent by 2030. And there is huge pipeline capacity to transport it to Europe: 60 GW. That’s way more than can be transported through electricity cables. There is 1.4 GW of high-voltage grid between North Africa and Europe.”

The Italian government is preparing a hydrogen strategy, which will be quite ambitious, says Franza, in terms of electrolysis targets. “It will be in alignment with the EU approach. It will give priority to green hydrogen but not rule out blue hydrogen.”

In fact, Italy aims to become a hydrogen hub between the south and the north of Europe. “We wanted to do this with natural gas, but never achieved it. We did not manage to create south-north flows that were big enough to close the price gap between the Italian and Dutch hubs. This led to structurally higher gas import bills and thus higher procurement costs for our gas-intensive industry.” With more and more pipes ending in Germany, that situation is not about to improve for Italy.

With hydrogen, however, Italy may have more success, Franza believes. “Costs of renewable energy production in the south of Italy and especially in North Africa are low and have the potential to fall further. And supply is very stable. While the focus is on solar energy, the wind potential in North Africa is very good too.” A south-north hydrogen backbone could supplement the future electricity infrastructure, creating a seamless electricity-hydrogen market, as described in the new CIEP study “Market Coordination of Dynamic Energy Flows”.

Bad news for natural gas producers? Not necessarily, says Franza. “They have a lot of know-how and resources in this area. There may be opportunities for them as well.” In the end, it’s up to the gas industry to determine how significant its role will remain. “The onus of proof will be on the natural gas industry. They need to position themselves in the right way. They need to take the question of methane emissions very seriously, invest in CCUS and in blue hydrogen and in the hydrogen value chain.”