This could be a make-or-break quarter for the mid-cap Canadian producer Valeura, as it tests the commerciality of what it believes are some net 10.1 trillion ft of gas in Thrace, western Turkey.

Valeura was carried by Norwegian state Equinor for the Yamalik-1 discovery well and the Inanli-1 appraisal well, the latter being drilled to test the theory that the reserves in the Yamalik-1 well were laterally continuous. Valeura also found that there was gas deeper than that found in Yamalik-1 and that there was natural fracturing in the reservoir. This was all good news.

Equinor also covered the costs of the 3D seismic. In the deep play Valeura has almost 50%, with Equinor having 50%. CEO Sean Guest told NGW in London late January: “We retained almost full ownership and control of the shallow conventional play but needed a major to participate with us in the deep horizons. Equinor wanted an early entry.”

Guest said: “We recognised the potential of our find early on and set out to attract a major partner. Statoil (as it then was), now Equinor made the best offer. And at about the same time we bought out a partner and the operator of much of our acreage, TransAtlantic, to control the play.” 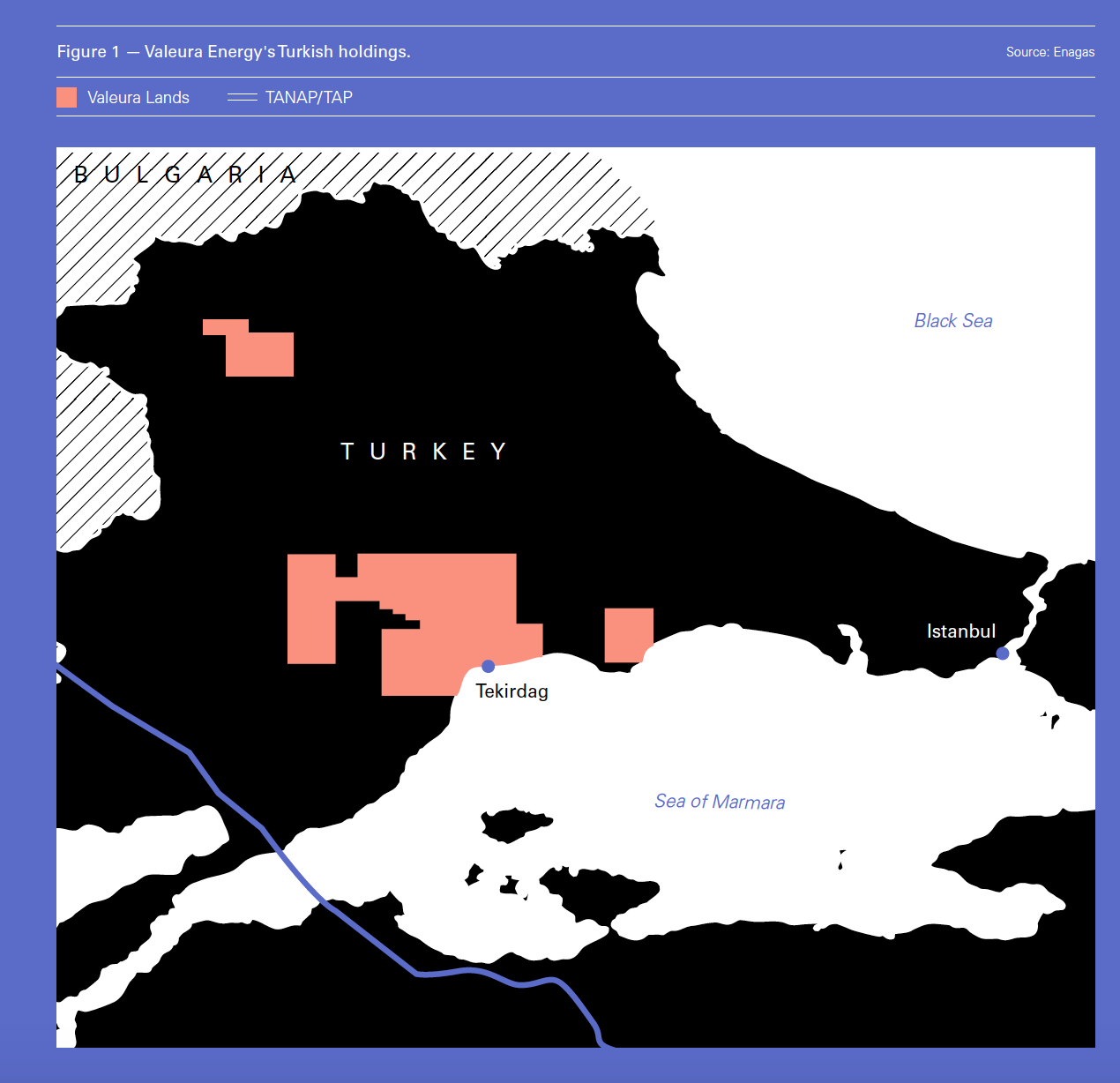 Guest said: “We have also raised capital and with Equinor funding the first two wells, we are financed until well into next year. It is a good, co-operative partner and there are no other majors in the region onshore.”

The two are now interpreting the Inanli-1 data gathered from drilling, logging, and core to define the fracking and completion programme. Fracking and testing operations are planned for around the end of March.

The well recorded gas shows throughout drilling operations, and based on both drilling and wireline data, the 1,615 metre gross column below 3,270 metres is interpreted to contain over-pressured gas, the company said at the time: “These results further support the interpretation of a basin-centred gas accumulation in the Thrace Basin. We are encouraged by the results and look forward to now drilling Devepinar-1, 20 km west, to prove that the play is pervasive across the basin.” That is some distance for what is described as a step-out well.

These deeper wells also have condensate, yielding about 50 barrels/mn ft³, analogous to some of the better North American unconventional gas plays. The very tight rock at these depths will need hydraulic fracturing and in a commercial development, will likely need horizontal wells, he said.

Well design for the appraisal programme is important: how close to drill the wells to test the extent of the play, how to encounter the best rock and so on. Looking further into the future, well design will be doubly important for development, including questions such as the ideal distance between the horizontal intervals, and which particular sweet spots to target, Guest told NGW.

Guest is now focusing on the completion and testing programme for Inanli-1. “With several reservoir sweet spots, and intervals of increased natural fracturing identified, we are eager to test flow rates and are focused squarely on starting the completion process.” Inanli-1 was drilled to a total depth of 4,885 metres and never reached the bottom, he told NGW.

The deep play has a lot of upside. The interval of interest starts below 3 km deep, and contains highly overpressured gas, he said.

If a big find were made, it could hardly be in a better place in Turkey, in terms of major infrastructure, being near the TurkStream pipeline landfall and the TransAnatolian Pipeline (Tanap), carrying Russian gas into Turkey and Azeri gas into Europe, respectively, Guest told NGW.

Valeura has acreage with some old wells that were drilled by the state producer TPAO but which it never brought online as the technology of the day was not able to produce the gas commercially – gas was recovered to surface, but there no sustained flows. For Valeura, fracking makes all the difference.

Turkey’s fiscal terms are good and the country is moving towards a market economy, Guest told NGW. It is now selling its gas at about $9.00/mn Btu and the fiscal terms are competitive: 12.5% royalty and 22% corporation tax. Although the electronic gas exchange is still in its infancy, there is the possibility that a fully liquid gas market will be ready by the time a successful exploration project is ready for development, he said.

Valeura has conventional gas production, at about 650 barrels of oil equivalent/day in Q3 and it saw no decline in Q4. It comes from about 80 shallow, small conventional fields all under 3 km deep, and normally pressured gas. It is sweet and dry, needing just dehydration before being injected into Valeura’s sales network.

There is some water production from some of the fields but it is not material and what is not evaporated can be reinjected. The shallow fields bring cashflow. While production is down year on year in Q4, revenues were almost double, thanks to higher prices and lower operating expenses. Local people are employed at the facilities.

The government is importing gas based on dollar-denominated contracts, while domestically, gas is sold in lira. Generally, Valeura’s price realisations are at parity with or a few percent below the national “Botas” reference price. But Valeura is free to negotiate prices bilaterally with its customers, of which there are about 55 in the local industrial and commercial sectors. These cover a variety of industries, including some power generators and even a major greenhouse grower.

Turkey has repeatedly pushed up domestic gas prices over the last year to reflect regional gas price inflation and changes in the value of the lira, so that ultimately Valeura sees realisations very close to prevailing European gas prices. In 2018 the government adopted a policy of making this price adjustment on the first day of each month.

The government knows Turkey will continue to be a price taker and importer of gas. Turkey’s strategy is to build more pipelines than it needs so that it can be a hub. With Shah Deniz output increasing Turkey is buying less gas from Russia, which in 2017 accounted for about half, LNG about a fifth, and Iran and Azerbaijan about 15% each.

There is also the risk of earthquakes not far from that part of Turkey, but Valeura is further north and has not been affected. Guest said: “While there are historically no earthquakes in the area where we are operating, we appreciate that Turkey is very sensitive to earthquakes and we have installed a seismic array for monitoring any tremors that might be related to our work. Our seismic data are analysed by both a government scientific body and a UK university. In all of our operations we have not detected any tremors associated with our activities. We do detect much larger events which we believe are due to quarrying.”