“The worlds of biogas and natural gas are totally different. There is not even any place where they meet. But this is where we have positioned ourselves, in between these two worlds.” 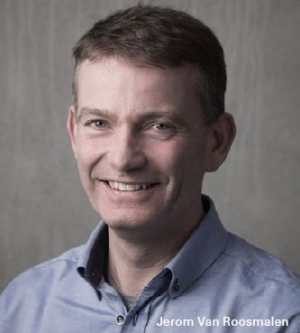 For Jerom van Roosmalen, who started his career as engineer working with small-scale custom-built construction and agricultural equipment, working with a big company like Shell is a new experience. The oil major has taken a minority interest in the unique bio-LNG installation Van Roosmalen’s company Nordsol is building in Amsterdam. “They have a different mindset,” says Van Roosmalen. “They think in terms of large projects. The question is if the bio-LNG market will work like that. I believe it will develop around small-sized local projects.”

The mechanical engineer who graduated in 2000 from the Technical University of Delft – where Shell recruits most its Dutch engineers – describes himself as a passionate tinkerer. “I am always trying to find creative solutions to mechanical problems.” How did he come to build a bio-LNG plant? “After my graduation, I did a lot of practical work on shovels and other agricultural equipment, but then I gradually drifted into consultancy work, which I found is not really my cup of tea. I was yearning to start making things again. I was building the weirdest things at home, it was totally out of balance”.

So around 2010, Van Roosmalen decided to start out as an independent entrepreneur. He began building small compressed natural gas (CNG) tank systems at industrial and municipal sites. “I realised that if we needed to reduce emissions, we had to move to biogas. But where to find volume in this market? The CNG market was very small. I decided the best bet was heavy transport. That meant making biogas liquid. The energy density of methane is too low to use in trucks and ships. LNG is the ideal alternative for diesel.”

Van Roosmalen threw himself on the technical challenge of making biogas liquid. That meant, for one thing, downsizing the processes used in the LNG industry. “LNG plants tend to be very large, whereas biogas is of course a small-scale process. I had to put the LNG liquefaction process into a container. Literally. I wanted to make it simple. Develop a new smart thermodynamical route but with enough operational bandwidth and limited energy use.”

He started to experiment (“you only get anywhere if you try”) at a sewage sludge facility, and then, at the end of 2011, happened to run into an investment manager from Shell Ventures, Cas Groothuizen, who liked the project and was prepared to spend some money on it. Even better, Groothuizen introduced Van Roosmalen to a Shell process engineer, Michiel van Aken, a man with huge experience in the LNG industry. “Michiel started out in the LNG business when there were just 15 people doing this within Shell. He became fascinated by this project.”

Eventually, Van Aken even decided to leave Shell and join Nordsol, where he now is a partner. “The oil and gas business is extremely conservative,” says Van Roosmalen. “There is not much room for innovation. Most innovation comes from small and medium-sized enterprises. It’s one of the reasons why Michiel made the switch.”

The road to success was far from easy for the partners. Van Roosmalen found a new location, where he put up a container next to a fermentation plant and started to validate the processes they had patented. “At one point I did not pay myself any salary for 18 months.”

The biggest technical challenge of a cryogenic liquid, Van Roosmalen explains, is to prevent condensation. “Just like in your freezer at home. Once ice forms, it only grows. It does not go away. When you work at -150 or -160 degrees, it’s worse.”

In addition, it is critical to prevent impurities. “The liquid needs to be very pure and clean, to PPM level. It’s very different from natural gas, which has 12% nitrogen in it. Fortunately, biogas is much cleaner than natural gas. It does not contain ethane or butane or propane or any of these gases that you find in natural gas. Just methane, CO2 and some impurities. This makes bio-LNG a very pure, premium drop-in fuel. Actually, it is the only biofuel that is superior in quality to its fossil counterpart. If you look at biodiesel, or ethanol, or methanol, these all have serious drawbacks. Bio-LNG you can put in the mix from 0% to 100% without any problems.”

In the end, Van Roosmalen and Van Aken developed a unique method to produce bio-LNG, says Van Roosmalen, in part thanks to a special three-phase separator they built. “Normally you first treat your gas to high purity, then you liquefy it. In our process we liquefy the gas under supercritical conditions and do the last polishing of the product gas (quality guard) afterwards. In this way you don’t get condensation in your heat exchanger. This also makes the heat transfer more efficient.” They also use their own gas as refrigerant, says Van Roosmalen. “Normally you use nitrogen or some mixed refrigerant. We use methane. That’s very efficient. You use a lot less energy in this way.”

The Nordsol installation does not just liquefy the biogas, but also the CO2. “We sell that too. At this moment mostly as dry ice. You know, dry ice is used for example in storage and transport of vaccines. A big market right now … But it’s also used for other purposes, for example in sandblasting. It’s as hard as sand but after an hour it’s gone. The CO2 goes off into the air of course but it replaces the CO2 that’s currently being emitted, which is almost always made from natural gas. Even the CO2 in soft drinks is made from natural gas.”

In terms of cost, it is impossible to compare bio-LNG with ordinary LNG, says Van Roosmalen. “The feedstock I use is so much more expensive than natural gas that comes out of a well. There is no way bio-LNG can compete with that. LNG is just incredibly cheap.”

The plant that is being built in Amsterdam, which will produce 3.4 kilotons bio-LNG per year and is 100% CO2-neutral, received a 20% CAPEX subsidy from the EU through the bio-LNG-Euronet programme, a consortium that is building 39 LNG fuelling stations and 2,000 trucks in addition to the Nordsol plant.

“But we do not get any output subsidies,” says Van Roosmalen. “That makes it hard for us to compete with biogas or green gas, which do get production subsidies in the Netherlands.” Instead, the product is bought by end users like Shell who have requirements to reduce emissions in the fuel they sell. The bio-LNG provides them with the green certificates they need. Van Roosmalen says this “technology-neutral” approach has been laid down in the new EU Renewable Energy Directive and is being rolled out at national level in the EU in various ways.

He is convinced bio-LNG has a large growth potential in the heavy transport sector. “The transport companies don’t have much choice. They have to reduce emissions. They can use ordinary LNG, which leads to 20% lower emissions compared to diesel. But that’s not enough. However, alternatives like electric trucks and hydrogen trucks are not market-ready yet. The first LNG truck was introduced 20 years ago, and only now LNG trucks – the fifth generation – are becoming economically feasible for transport companies. It takes that long to develop a new market like this. It’s not just the technological issues, but also all the regulations and infrastructure that needs to be ready. With bio-LNG they can tap into the LNG market right away.”

The climate benefits of using of biomass in electricity generation are increasingly being questioned in Europe, as forests are being cut in North America and Eastern Europe to provide wood pellets to be burnt in power plants. How sustainable is bio-LNG? “The plant in Amsterdam will be very sustainable,” says Van Roosmalen. “The fermentation plant will use organic wastes from food distributors. The LNG will then be used by the supermarket companies to run their trucks on. Perfect circularity. It doesn’t get any better than this.”

But what if bio-LNG becomes bigger? Will there be enough feedstock available to support growth in a sustainable way? A fair question, says Van Roosmalen. “In my view it’s an illusion to think that any one solution will enable the energy transition. Bio-LNG is just one option. We will need all options that exist.”

He concedes there are limits to the sustainable use of biogas. “I am convinced that bio-LNG must be done on a local scale, with local feedstock. If you are going to import biomass from far away and turn it into bio-LNG in large plants, not only will your costs go up, but your emissions as well.”

Van Roosmalen believes the European bio-LNG market will develop locally, with many small installations, in the same way as renewables like solar and wind are developing around the electricity network, through local integrated chains. He notes that in such a market ordinary LNG will still be needed as backup. “If we can’t produce at our plant for some reason, we will need to get the LNG from elsewhere.”

The question is whether this business model can work for the likes of Shell. Van Roosmalen observes that a company like Shell tends to see things differently. “They think big. We have a lot of discussions with them about this. Pretty intensive discussions.” He recalls that when he first went to see Shell with his plans, they very quickly turned him down. “I was way too small for them. Now they are very interested, but they still have to decide how they will position themselves in this market.”

For Van Roosmalen himself the road is clear. “Our strategy is to build a large number of small installations in the coming years. But also to sell our technology, for example in the Asian markets.”

Nordsol is also talking to other players in the European market. “Gasum in Sweden have been doing a great job in bio-LNG,” Van Roosmalen says. “They took a lot of risk. We learn a lot from them. They are also very interested in our technology.”

Bio-LNG in transport “ramping up quickly” in Europe

The European market for bio-LNG in transport could reach 461 TWh by 2030, which would represent 45-50% of the total production capacity of biomethane by that time, according to a white paper published by the European Biogas Association, Gas Infrastructure Europe, the Natural & Bio Gas Vehicle Association (NGVA Europe) and SEA-LNG in November last year.

Whilst current annual production of biomethane amounts to just 3bn m3, a minimum of 95bn m3 of biomethane can be reached by 2050, according to estimates from consultancy Navigant. The consultancy says that there is sufficient feedstock available to reach these levels: 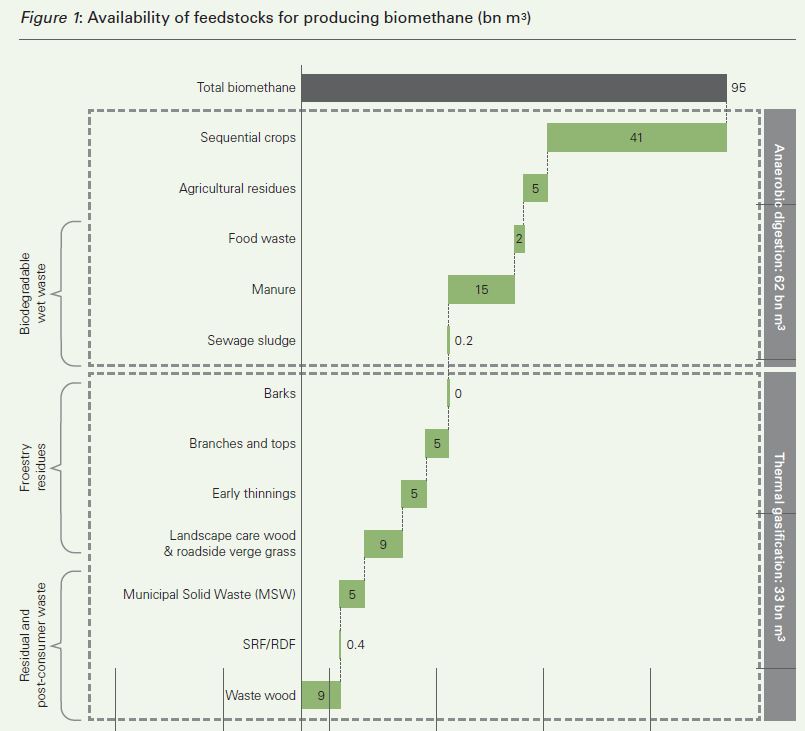 The production of bioLNG is ramping up quickly in Europe, notes the report.  “Whereas, in previous years, it was a niche green fuel, it is now being recognised as a needed green fuel that can be blended in with LNG and assume an increasing share over the years to come.”

The largest production facility so far is Biokraft Skogn in Norway, which became operational in 2018, and is built adjacent to a paper mill.

As of November 2020, there were 333 LNG fuelling stations in Europe for road transport:

From the Editor: A hydrogen dissident [GasTransitions]