Christian Weinberger, Hydrogen Coordinator at the EU’s DG GROW (Department for Internal Market, Industry and SMEs), leaves no doubt that the EU means business when it comes to hydrogen. “We are moving with a big force into a new direction,” he says, in an exclusive interview with Gas Transitions. 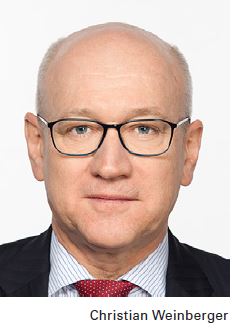 He does add that hydrogen is only a means to an end, not an end in itself. “Ultimately it’s about the Green Deal. The EU is moving to net zero emissions by 2050. Hydrogen is one tool that we use. It makes it more likely we will get there, and possibly faster.”

It’s an important tool, though. The European Commission announced a Hydrogen Strategy on 8 July, with ambitious targets. It projects 40 GW of electrolysis capacity to be built by 2030, with a further 40 GW to be imported from third countries, and no less than 500 GW of capacity by 2050. The Strategy estimates that cumulative investments in “renewable hydrogen” will be anywhere between €180 and €430 billion by 2030, with the share of hydrogen in the total energy mix going from less than 1% today to more than 15% in 2050.

Some analysts have raised questions about some of these numbers, for instance whether the investment figures include investments in renewable power capacity, but Weinberger says that the numbers should be seen as “indicators rather than science”. “There is no detailed roadmap for hydrogen. There cannot be such a roadmap at this moment. The sector is much too broad for that. What the Strategy does is send a signal. We want to make sure that everybody is aware what is going on.  And the strategy clearly says: The time to act starts now.”

Some also question whether the huge expansion of renewable energy needed to meet the hydrogen targets is feasible, but Weinberger is quick to dispel any doubts in that direction. The Iberian Peninsula alone can produce enough solar power to meet all of Europe’s energy needs, he insists. “Not just electricity needs, or hydrogen needs, but all energy needs. They have enough space for that, enough unused land. And that’s just solar power from Spain and Portugal. That does not include the potential of offshore wind and solar power elsewhere.”

This is why it is a mistake, says Weinberger, to believe that Europe will become dependent again on external suppliers if it goes the renewables and hydrogen route. “Germany for example has reserved €2 billion to invest in hydrogen production abroad. They are thinking of Northern Africa. They could also choose Spain or Portugal. It’s a choice that they make, not a necessity.”

Spain and Portugal see hydrogen as a tremendous industrial opportunity for their countries, he adds. “They are happy to invest in this. For them hydrogen is the key, because it allows them to export the energy they will be producing. For them, the sun is a natural resource, just as oil is for the Gulf region. This export could not be done by wires and pylons. That would be too costly and –even more importantly - would encounter too much resistance from the public.”

Weinberger’s job at DG GROW is to coordinate all hydrogen activities going on inside the department and with other departments in Brussels, such as DG Energy, DG Environment, DG Climate Action, and DG Research and Innovation, all of which are involved in the emerging hydrogen economy. DG GROW has the lead when it comes to the European Clean Hydrogen Alliance, which was officially launched on 8 July alongside the Hydrogen Strategy. The goals of this Alliance are to scale up the hydrogen value chain across Europe and develop a pipeline of significant projects. 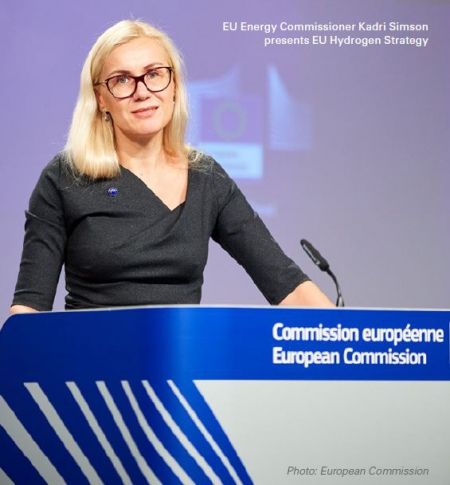 “What is particularly important,” says Weinberger, “is that things will move in sync. It makes no sense to have strong incentives to build hydrogen trucks if there are no clean hydrogen refuelling stations, or vice versa, to mention one example. Projects and incentives have to be linked together, for hydrogen to achieve a breakthrough.”

The evolving hydrogen market offers huge opportunities for businesses across Europe, says Weinberger. “If you look at the 200 members of [trade association] Hydrogen Europe, the potential is vast.” “It is a who’s who of the whole European industry. And they are all very interested in clean hydrogen.”

Isn’t there a risk that the market will be dominated by a few large players, which have the skills and money to do big hydrogen projects? On the contrary, says Weinberger. “The big drivers of the market currently are SMEs. The showstoppers are rather some of the large companies. Some have an interest to see to it that green hydrogen does not develop too fast.”

Some companies are “getting it”, notes Weinberger, others are not. “A company like Shell shows that it understands it needs to adapt.” Shell has announced plans to build 15 GW of electrolysis capacity combined with offshore wind in the North Sea. “That’s ambitious, but they won’t corner the market with it. There will be plenty of room left for others.” By contrast, says Weinberger, “a company like Engie is still talking about building 50 MW electrolysers. With this approach they risk to be tiny in hydrogen.”

The task of the EU and member state governments will be to finance the initial cost difference between clean hydrogen and “grey” hydrogen, says Weinberger. “The projects will not happen by themselves as long as they are not cost competitive. Public programs will have to cover the initial gap.” Both the EU and member states will have to make funds available. “The EU has several options: the ETS Innovation Fund, the Structural Funds, and the COVID-19 Recovery Fund, which should also be used for this. And once projects are bankable the European Investment Bank (EIB) has big pockets to provide the financing for the large investments”.

In its Strategy, the European Commission seems to express a clear preference for “green” (renewables-based) hydrogen over “blue” (based on natural gas with CCS).  Thus, whereas the Strategy anticipates investment of up to €382 billion into green, “renewable” hydrogen in the next ten years, investment into blue, “low-carbon” hydrogen is expected to be just €18 billion. Why this difference?

Weinberger: “It is very difficult to predict what will happen in the blue hydrogen domain. While there seem to be many projects circulating which plan for ambitious renewable hydrogen production, there are very few known projects for blue. Actually what the strategy recommends to the member states is to offer contracts-for-difference based on technology-neutral auctions. If blue is cheaper, fine. But if green is cheaper, why would you do blue? The reason we focus on green hydrogen is obviously the bigger climate effect. When green will become cheaper than blue there won’t be any reason to give support to blue, since green hydrogen has the better carbon footprint. But It is impossible to predict the cost evolution at this point in time. So since low-carbon (“blue”) hydrogen is still more climate friendly than grey there is also support for blue in the interim. The budget figures are just indications. The market should decide how long this interim will last.”

The biggest risk for hydrogen, according to Weinberger, is “a piecemeal approach. If you build 10 MW here, 10 MW there, you will not reduce costs enough. It would be a waste of taxpayers’ money. If we want to get to competitive costs, around €1.50/kg, we should build gigawatt scale. If we don’t, the Chinese will. It is time to get big now.” 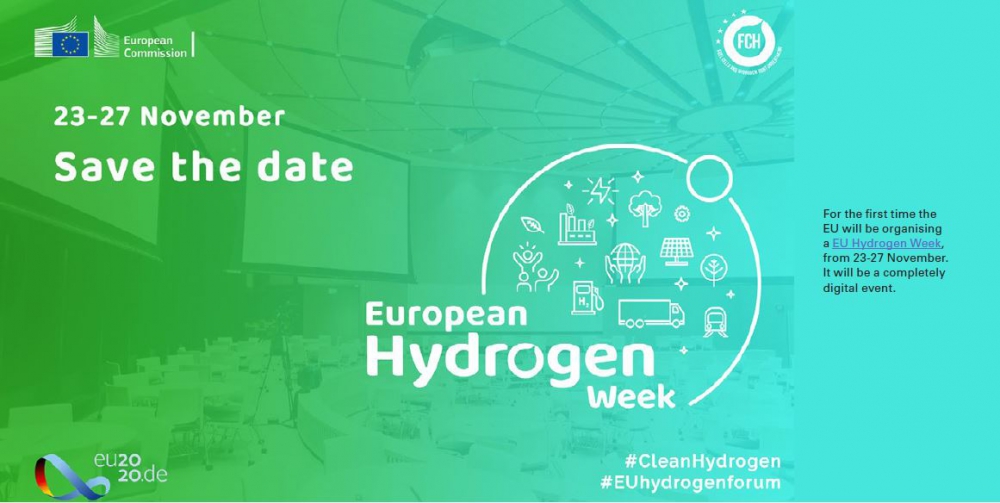 Some analysts question whether the Commission is choosing the right regulatory approach for the development of a hydrogen market. They argue that the regulatory structure of the natural gas market, which for example requires “unbundling” of infrastructure and production, is not suitable for a nascent market like hydrogen that still needs to be built up. For example, neither pipeline operators nor producers may be allowed to own and operate integrated hydrogen facilities, whereas it is precisely this type of plant that may be most attractive commercially.

Weinberger agrees that this could be a problem. “I can see some arguments for keeping unbundling rules in place, but I can also see arguments for allowing a transition period. The issue is not been decided yet. It will be debated heavily in the near future.”

What are the implications of all this for the natural gas industry? The gas infrastructure companies, says Weinberg, “won’t face big problems. They can feel optimistic about this. They may not see business go down. The main thing for them is to build dual use infrastructure, to avoid stranded costs.” He notes that LNG related companies have experience building international gas value chains which they can apply to the hydrogen market. “Of course not one-to one, since the challenges are different, but there are useful similarities.”

For natural gas producers, it’s a different story. “I think oil companies will be hit the hardest. But gas producers will also have to adapt. However, this is not about hydrogen so much as about climate. They will need to find a new role in a net zero emission energy system. It is linked to the bigger overall context of the Green Deal and Paris21 much more than to the hydrogen strategy as such. Hydrogen is just a tool. “

There may be companies that cling to the belief that it’s not going to happen, but Weinberger says that is short-sighted. “Things may take a bit longer than planned. But they will happen. Nor will COVID-19 change that. And it has to be seen as an opportunity for European companies rather than a threat. The faster we progress in the EU, the more our companies will have a competitive advantage when other regions follow.”

If there are still gas companies that believe the energy transition will pass them by, they should wake up quickly, says Weinberger. “The longer they wait, the harder will be the adaptation to the new realities.”