Events of the past couple of years have accelerated the long-delayed process of ensuring energy security for countries in Central and South Eastern Europe. The Energy Union project which started last year has given further impetus to the goal. A whole array of projects, especially for natural gas transport, have been proposed all around the region, eventually forcing all countries to take part in the debate. Some of them, such as Greece, Bulgaria or Slovakia have seen this as an opportunity to capitalize on their location or existing infrastructure in order to warrant their seat at the negotiation table. Other countries, however, have been somewhat slower to react and up to now have been punching below their weight. Such is the case of Romania.

Unlike most countries in the region, Romania has a less stringent need to find an alternative to Russian gas imports. The country’s own proven natural gas reserves, estimated by the National Agency for Mineral Resources at 120 bcm in 2013, still give it a good 10 years of domestic supply at current demand levels. And prospects for additional volumes are encouraging given successful drilling in two of the country’s offshore perimeters: the Neptune block, under concession by OMV Petrom and ExxonMobil, estimated to hold between 42-84 bcm of natural gas; and EX 30 Trident under concession by Lukoil Overseas, Romgaz and PanAtlantic, estimated to hold an additional 30 bcm.

Both onshore and offshore reserves, however, come with caveats. Most onshore fields are mature and depleting, raising the cost of drilling in what looks like a lasting low oil price environment. Offshore investment carries the same cost risk, albeit for the more expensive dedicated technology. This means that investors’ interest is no longer guaranteed, unless the proper market conditions are created for them to operate in. And the Energy Union project provides the instruments the Romanian authorities need in order to maximize their success in the natural gas sector. This has been well understood and projects to serve this goal have come to the fore.

Transgaz, the national natural gas transport system operator (TSO), has put its weight behind the BRUA Corridor (Figure 1), a set of reverse-flow interconnectors between Bulgaria, Romania, Hungary and Austria. It is to have a 1.5 bcm/y capacity towards Bulgaria and 4.4 bcm/y towards Hungary. An additional pipeline is set to be built in order to bring offshore natural gas onto the national grid and then onwards through BRUA. Though with a small capacity, BRUA’s merit is that it can deliver gas from both the Trans Adriatic Pipeline (TAP) once it is operational and from the Austrian Baumgarten gas hub, while at the same time making use of existing infrastructure, leaving only additional compressor stations and some pipeline segments to be built. 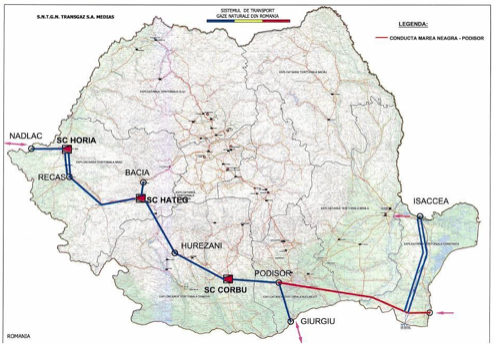 BRUA was chosen at the expense of another project, Eastring (Figure 2), proposed by the Slovak TSO Eustream. Without yet having settled on a definitive route, Eastring aims to connect existing gas infrastructure in Slovakia, Ukraine or Hungary, Romania and Bulgaria via a new reverse-flow pipeline. It has largely the same merits as BRUA in terms of natural gas sources, albeit a different route and significantly larger capacity – expected to reach 20 bcm at first stage and 40 bcm after its final stage is completed. 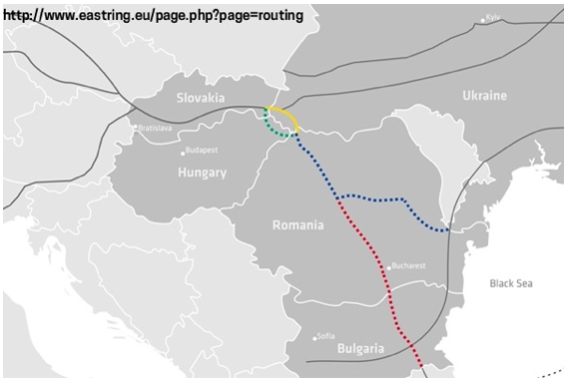 Both Eastring and BRUA have made it to the European Union’s Projects of Common Interest (PCI) list, though under the “cluster of potentially competing PCIs”, meaning that it is up to the market to determine whether one or more or even all will be implemented. They are thus “potentially competing” amongst themselves, as well as with Greece’s Tesla pipeline to deliver Russian natural gas from the Turkish-Greek border through Macedonia, Serbia and Hungary to Baumgarten in Austria; and infrastructure to allow the development of a Bulgarian natural gas hub. PCI status comes with accelerated permit granting procedures; faster environmental assessment; and the possibility of receiving financial assistance under Connecting Europe Facility.

Under these circumstances, Romania is punching slightly below its weight for two reasons. First, it is not yet a given that BRUA will come into existence, given Eastring’s attractiveness to markets. Larger volumes attract larger profits. Attachment to just BRUA therefore could be counterproductive.

Second, Romania has not yet taken any clear steps towards making use of its Tranzit II pipeline (Blue line in Figure 1 in the country’s Dobrogea region) from Isaccea to Negru Vodă which, as of January 2016 will be free from its obligations of the 1996 Transit Convention with Gazprom. This means that as of next year Tranzit II will need to comply with the EU’s Third Energy Package and thus allow third party access. Implementation requires the construction of compressor stations, as well as additional, smaller segments of pipeline to connect Tranzit II to the Black Sea (in order to collect offshore natural gas) and to the national natural gas network. Investment would thus be minimal, with advantages immediate and significant.

The pipeline has a 9 bcm capacity, on par with BRUA if only half is to be tapped into by third parties, though BRUA requires higher construction costs. Tranzit II can also be made more readily available than BRUA given that its largest and most significant segment is already built.

The speedier implementation and its lower cost are bound to give Black Sea investors a boost in bringing gas to shore if they would then have access to the larger regional natural gas markets, instead of being kept captive on the half-regulated Romanian market. Domestic natural gas, would, of course reach the Romanian market with priority, and only after the Romanian market is saturated would producers be able to export, an issue they have already agreed to when starting investment. The country’s energy security, would thus not be jeopardized. In addition, just like BRUA and Eastring, Tranzit II would function under reverse flow conditions, thus stepping up competition for domestic producers once Azeri or additional Russian natural gas is made available to the market, either through TAP, Nord Stream II, Turkish Stream or LNG facilities.

Romania thus has options that do not necessarily exclude each other. Settling on just one of these options at this stage and ignoring the others is thus counterproductive. In time, it risks diminishing the country’s advantages and posture on the regional energy market.

Anca Elena Mihalache is a Senior Analyst with the Energy Policy Group, a Romanian think-tank specializing in energy security, and a Researcher for Wikistrat, a global crowdsourced consultancy for geostrategic analysis and forecasting.

This article was first published in the January 2016 issue of Energyworld magazine, www.energyworldmag.com .

EBRD to Work on Shift from Coal in W Balkans