Indonesia's state-owned gas transmission and distribution company Perusahaan Gas Negara (PGN) hopes to be in a position to export LNG and to invest in overseas gas infrastructure projects.

It is part of the company's strategy to strengthen its position as an international LNG player, following the Indonesian government's decision in 2018 to designate PGN as a subsidiary of state-owned upstream oil and gas company Pertamina.

The government hopes that the move will streamline the country’s gas value chain and give it more control over decisions affecting the upstream, midstream and downstream sectors.

Based on PGN data, there are 34 cargoes/year available for the company to trade, according to PGN's president director Gigih Prakoso.

Despite the present woes, Asian demand is expected to grow in the coming years: the list of new or growing importersincludes Myanmar, which could take between five and seven cargoes/year starting next year; the Philippines could take about half of the annual total between 2023 and 2043; China could take six or seven cargoes/year; Japan one or two; and Europe two this year, Prakoso said in a parliamentary hearing on February 10.

PGN also wants to build gas infrastructure facilities. In the Philippines, this would include an LNG receiving terminal with storage facilities. The final investment decision is expected to be decided this year, Muktar said, declining to give detailed information regarding the project.

PGN has a deal with China's Sinopec to supply six cargoes this year. The first shipment had been expected to start by early January 2020, but it was delayed by the outbreak of coronavirus – now known as Covid-19 – Prakoso said.

PGN's strategy and business development head Syahrial Muktar said that the company had secured preliminary commitments from some countries regarding LNG supply, but these are not yet legally binding sale and purchase agreements.

PGN may focus more on LNG markets in Asia, especially in countries in southeast and south Asia, whose needs are expected to grow. But the company also hopes to supply LNG to Europe as part of its effort to optimise its gas production from the Fasken field in the US, according to Muktar. PGN’s subsidiary Saka Energi holds 36% and Swift Energy 64% of the 1 trillion ft³ field. This gas would contribute to some of the LNG cargoes envisaged.

As China is one of PGN's focus, the company co-operates with Chinese engineering and construction company and manufacturer WnD (Liaoning) Heavy Industry Co to optimise the LNG portfolio by expanding demand in China. This collaboration is in line with PGN's efforts to expand LNG services and portfolios at the global level.

The two companies signed a preliminary agreement February 18. In accordance with the MoU, within the next year activities will be carried out so that PGN's plan to enter into small-scale LNG trading in China and the region can be achieved in accordance with the planned targets, Muktar said.

"PGN hope to enter China's LNG market and WnD has provided a small-scale LNG logistics solution in China. This creates the opportunity to develop the small-scale LNG industry in China and the region," Muktar said, adding that it is possible that there will be other forms of co-operation based on a later agreement, which could cover bunkering and trucking LNG around the region.

He added that China has a huge potential with a variety of business opportunities. The country needs energy sources from everywhere to keep pace with demand. Based on PGN calculations, China has been using more than 15% more LNG every year; again, the Covid-19 threatens this rosy outlook.

Muktar said PGN was “very enthusiastic” about this collaboration. WnD is an engineering, procurement, and construction company for LNG, CNG, and cryogenic equipment, thus becoming an integrated provider of LNG and CNG logistics solutions. It is hoped that both PGN and WnD can further explore ideas together other about the development of LNG through this collaboration," Muktar said.

Indonesia is in effort to sell its LNG production, either domestically or overseas. It is related with Japan's LNG buyers whose contracts are going to expire in the end of 2020. Indonesia is seeking an extension contract from the Japanese buyers as well as seeking other potential buyers, according to a government source who declined to be named.

"We are trying to negotiate with the Japanese buyers. But not all of companies willing to renew the contract. If it is the case, we will seek other buyers to buy the LNG," he said. 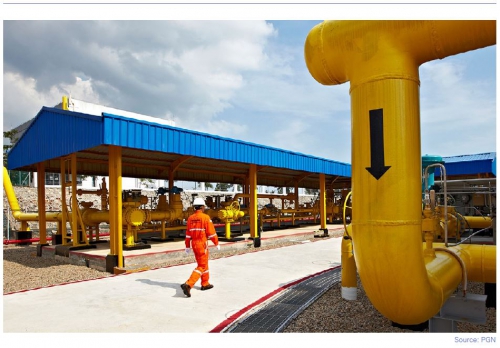 Indonesia aims to produce 211.9 standard cargoes this year, comprising Tangguh project in Papua of 122.3 cargoes (150,000 m³ each) and Bontang project in East Kalimantan of 89.6 cargoes (125,000 m³ each). The figures are lower compared with last year’s realised LNG production of 229.1 cargoes, made up of 117.4 cargoes from Tangguh and 111.4 cargoes from Bontang. About 168.5 cargoes were exported, and 60.5 cargoes were allocated for domestic buyers, he said.

Lower nominations for Bontang LNG hit the producers last year: partner Neptune said it had sold about a quarter less LNG in the first three quarters than in the same period last year, with most of that drop being in the third quarter. "While we believe this is a short-term issue, we anticipate a risk of some curtailment in 2020 and have protection through take-or-pay provisions in our gas sales agreement," it said.

Indonesia's LNG production this year may be higher compared with the targeted volume, as Pertamina plans to boost its production from Mahakam block, spending $1.5bn drilling 257 wells there in 2020-2022 in a bid to boost production. Mahakam production in 2019 reached 711mn ft³/day but it is declining (see box).